Jay and Geno are Homeless in Fresno

by Mike Rhodes (MikeRhodes [at] Comcast.net)
I met Jay and Geno today. They live by the railroad track in downtown Fresno, not far from the Poverello House and Rescue Mission. Geno lives in the shelter pictured below. Jay lives about a mile away. 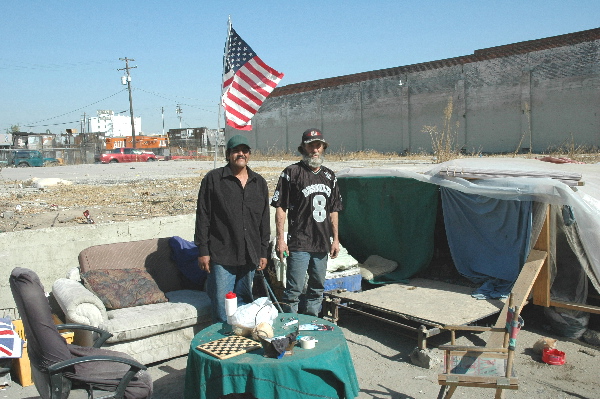 If you walk South, down the railroad tracks from the Rescue Mission, you will find Geno’s shelter. You really can’t miss it because his is the only shelter displaying a large American Flag. Gino is a Vietnam Veteran and he likes cats. There are lots of cats around, including a litter of very adorable kittens. Gino said it was a litter of kittens like the ones he has now that was killed by city workers a while ago. To read about the murder of those kittens, see Pamela Kincaid’s story here: http://www.indybay.org/newsitems/2006/10/25/18323305.php

Jay lives about a mile South of Geno’s shelter near Jensen and highway 99. Jay and Geno are good friends. Jay says there are about a dozen men that live in his encampment. Since he is away from the epicenter of the homeless population he says his group gets harassed less. Until recently, Jay worked at a transmission shop, near where he lives. He worked there until a car part dropped on his finger smashing it. Jay’s employer did not, of course, have his employee covered under Worker’s Comp. Part of the reason, I would imagine, is because he was paying Jay $30 (cash) for 8-10 hours of work. Now Jay is out of a job, has no medical insurance to have a doctor look at his smashed finger, and is not quite sure where he is going to go from here.

Both Jay and Geno were glad to hear about the Temporary Restraining Order that will stop the police from taking and immediately destroying their property. They were both given cameras and agreed to take pictures of any police activity in the area.

For more information about the lawsuit and the TRO, see: http://www.indybay.org/newsitems/2006/10/17/18321050.php
END_OF_DOCUMENT_TOKEN_TO_BE_REPLACED
Add Your Comments
Support Independent Media
We are 100% volunteer and depend on your participation to sustain our efforts!