by posted by Mike Rhodes (MikeRhodes [at] Comcast.net)
Two Fresno women tell us what it is like to be homeless in Fresno. The photo below is Pam Kincaid, as she told her story to the press in front of Fresno City Hall. 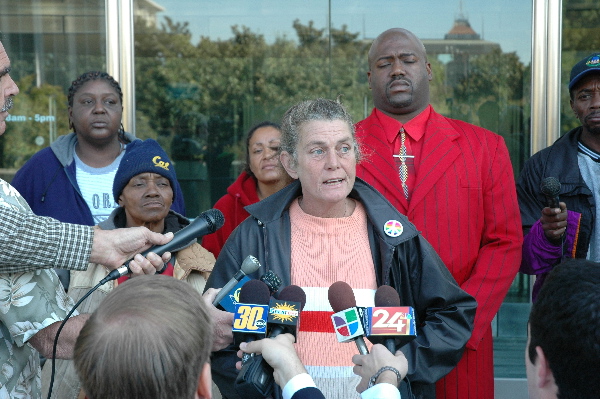 The statements below are from two of the women who are a part of the lawsuit (see http://www.indybay.org/newsitems/2006/10/17/18321050.php ) to stop the City of Fresno from taking and immediately destroying their possessions. These are the declarations, in their own words, they gave to the attorneys working on the case. For more information about this lawsuit, and other statements by the participants, see http://www.aclunc.org .

I am 48 years old and I currently live in Fresno, California. I have lived in Fresno for 15 years. My husband and I have been homeless for approximately six months. We had to leave our last apartment because the rent was $850 per month and this was more than we could afford to pay. We do not have enough money for an up-front deposit and first and last month’s rent to be able to rent an apartment. I would really like to have housing, because I want my grandchildren to be able to visit me. During the time that we have been homeless, I stayed for a little while at the Naomi House for women, but this meant that I could not live with my husband. I have been in several abusive relationships in the past. One of my previous abusers knocked my teeth out. My current husband is not abusive and it is important for us to stay together. Because my husband and I cannot stay together in shelters, and because space is limited there, we sleep outside in tents.

Sometime during the first two weeks of April, 2006, the City of Fresno took almost all of my personal belongings. I do not recall the exact date, but I remember the events well. We were camped on a hill off of G Street. My husband and I were at the Poverello House when we heard that the City was taking people’s property. We initially thought that the City was only taking belongings from in front of the Poverello House, but then someone told us the City was going up to the hill where our belongings were. I walked as fast as I could to get there, but I do not walk very fast because I need surgery on my foot, and I have high blood pressure and asthma. By the time I arrived at the site, it was empty, except for the crumpled shell of our tent and a few other stray items. All the tents and items belonging to the Mexican workers we shared the site with were also gone. I could see the tracks in the dirt from where the dump truck had driven.

The City did not give us any notice that it was going to take and destroy our belongings. My husband and I lost almost everything we owned, including: my teeth, my medications, a small TV, a laptop computer, a bike, our dog food, the blankets, sleeping bags, my husband’s weights for lifting, and our clothes, including a new pair of shoes I had and my personal papers. I was extremely upset.

The City came again to our campsite on October 8, 2006. We were camped in a new spot, under the bridge at San Benito and H Street. At 8:30 in the morning, the police came without any warning and started taking shopping carts from people. The police threw everyone’s possessions on the ground and then took all the carts and threw them onto a truck. After taking the carts, the police said they would be back for all the rest of our belongings, at 12:00 that day, but they have not come yet. I do not know where I could go to be safe from these property seizures.

For the last 5 or 6 years, I have lived in the area just south of downtown Fresno. I make a little money from recycling and selling crafts, but not enough to afford an apartment or other housing. I have occasionally stayed at the Naomi House, which is the one women’s shelter in town. However, I am claustrophobic and have had panic attacks when I have stayed there before, so I have not done that for the last 2 years. Also, I have a dog who stays with me for protection and for company, and he cannot stay with me if I am in a shelter. So most of the time, I live outside.

Approximately one year ago, I had set up a makeshift tent by the railroad tracks, just south of the downtown area of Fresno. I believe that this is the railroad’s property. A man who works for the railroad comes through the area every month or so, basically to check on things. He asks for people’s names, but has never asked me to leave, and I have not heard him ask anyone else to leave. Except for a dock in the back of Wilson’s Motorcycle Warehouse, I have never seen any signs in that area telling people they can’t be there.

I had also seen Fresno police and sanitation workers come through the area every month or so, taking homeless people’s property. I was usually able to keep my belongings from being taken by moving them when the workers came through. Unfortunately, this one time approximately one year ago, I left my property unattended, and when I came back, it was all gone.

Almost all of my possessions were taken, including important documents like my identification, my birth certificate, and my telephone/ address book, which had important contact information for people I want to keep in touch with. Worst of all, I lost family photos, including the only pictures I had of my sister, my daughter, and my deceased mother. Those photos can never be replaced.

No one, either from the City or from anywhere else, told me beforehand that City workers were going to come through that day and take homeless people’s property. No one told me any way to get my property back once it was taken. Having previously seen City workers just throw away other people’s belongings into a dump truck as if it were trash, I have no doubt that this is what was done to my belongings that day.

Approximately 2 months ago, I was again staying near the railroad tracks, just south of downtown. Since the previous time that my property was destroyed, I had managed to accumulate a few things that I was keeping with me. I had many of my belongings in a shopping cart, covered by a tarp. This was an old, outdated cart that had been abandoned and I was using it to store my possessions. This is one of the ways I could move my possessions. I left for an hour or two in the middle of the day, and when I returned, the cart had been taken. Items that had been stored in the cart had been dumped onto the ground. Some items, such as clothing, were still there. However, other important items had been taken. These included a toolbox and various tools (screwdriver, wire strippers, flashlight). Those tools were very important to me because I used them to make a little income. For example, I used the wire strippers to take wire off of metal items so they can be recycled. I used my other tools to take apart metal items to sell for scrap. Also, I used these tools to make crafts, such as jewelry and “dreamcatchers,” which I was able to sell to make a little bit of money.

Since I knew that City workers often came through the area and took homeless people’s belongings, I was sure that this is what had happened that day. I later confirmed with other homeless people in the area that City workers had been in the area that day, and that the workers had been particularly focused on taking shopping carts. I never received any notice from the City or from anyone else that people from the City were going to be coming through the area taking carts or anything else, and I was not given any way to get my belongings back after the fact.

I have also personally observed other raids, including one that happened approximately 4 ½ months ago. In that raid, I saw City workers destroy homeless people’s property, even though it was clearly owned. For example, I saw City workers use a bulldozer-type machine with “claws” to scoop up and destroy an eight-man tent that was set up near the railroad tracks. That tent belonged to a homeless man I knew from the area, who was living in the tent but who just happened to be gone when the City people came by. He also had some cats staying with him. I think the cats may have been inside the tent at the time it was destroyed; at any rate, I never saw them again after that. I saw a very similar raid about a month earlier. One of the City workers told me at that time that they were doing these raids because local politicians were upset about having seen stories on the news about how homeless people were living on the streets of Fresno.

Before I became homeless, I used to have a house and a job. I lost both when I developed injuries at work that made it impossible for me to keep my job. I hope that someday I will be able to get off the streets and into permanent housing. But the fact that the City keeps taking and destroying my property makes that goal seem that much harder to achieve. I always live with the fear that the City will come and take what few possessions I have left. 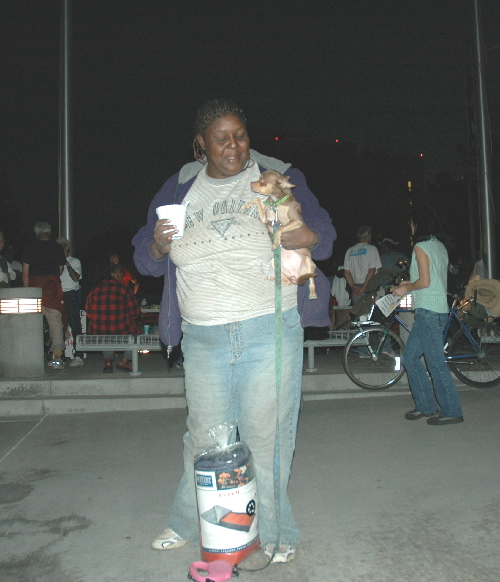 Charlene Clay and her dog Chica at City Hall during the sleep in held to bring attention to the homeless issue. See: http://www.indybay.org/newsitems/2006/10/22/18322289.php

Add Your Comments
Comments (Hide Comments)
§Anarchist Squatting and Land Use in the West:Direct Action and the Critique of Real Estate
by Land and freedom
Free online text of:

"Anarchist Squatting and Land Use in the West: Direct Action and the Critique of Real Estate"

T.Rios
Add a Comment
Support Independent Media
We are 100% volunteer and depend on your participation to sustain our efforts!