by Mike Rhodes (MikeRhodes [at] Comcast.net)
While the homeless in Fresno are starting to stand up for their rights, they continue to be hassled. The photo and story below are about the ongoing harassment they are experienced. A lawsuit filed last week would force the City of Fresno to stop taking and immediately destroying homeless peoples property. 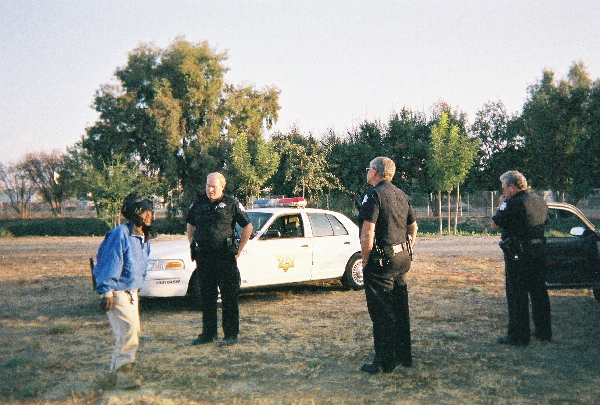 On Sunday morning, as many of this community’s homeless and their advocates were waking up from a camp out at Fresno City Hall,
(see: http://www.indybay.org/newsitems/2006/10/22/18322289.php ) the Fresno Police Department (FPD) was busy hassling the homeless in another part of downtown. Three or four patrol cars pulled onto Caltrans land adjacent to highway 99 near Ventura and woke up the sleeping residents. FPD officer Michael G. Harris, after waking everyone up, said “how soon can you get up and out of here?” He claimed unidentified neighbors had complained and Caltrans would be out the next day, presumably to remove them.

This follows a week in which the homeless have started standing up for their rights by filing a lawsuit to prevent the City of Fresno from taking and immediately destroying their possessions. See: http://www.indybay.org/newsitems/2006/10/17/18321050.php . A Federal judge issued a Temporary Restraining Order on Thursday. See: http://www.indybay.org/newsitems/2006/10/19/18321616.php . The sleep in at Fresno City Hall on Saturday night focused unprecedented attention on the homeless issue.

This Indymedia reporter has distributed a large number of cameras to the homeless and they have begun to document the injustices taking place. See the first story and photos that resulted in this new grassroots photojournalism: http://www.indybay.org/newsitems/2006/10/11/18319764.php . The police and other city agencies will not be able to do anything without their actions being photographed.

One of the homeless women living on the Caltrans strip of land said Johnson told them that “I wouldn’t be here if my boss didn’t send me” and he seemed to be somewhat guilty about the role he was playing. Johnson asked them why they did not move into the tool sheds at the Poverello House (AKA, the Village of Hope). They told him they would not put their dogs in those tool sheds. Residents have no rights, they are only allowed in at night, their property can be searched at any time (without due process), and you can be kicked out at any time by a vote of the members. It is something like the survivor series for the homeless.

The residents living on the public land told me they were not going to leave. One of the women said “where are we going to go?” Most (if not all) of the open land in downtown is owned by somebody. So, anywhere you go, you could be accused of trespassing. We talked about the possibility of staying at City Hall or Courthouse Park, but that discussion was premature. They want to see if the police or Caltrans comes back and tries to remove them. They will be ready with their cameras and increasing knowledge of the law.

The photo above was taken by one of the grassroots photojournalists and was taken during the incident.
END_OF_DOCUMENT_TOKEN_TO_BE_REPLACED
Add Your Comments
Support Independent Media
We are 100% volunteer and depend on your participation to sustain our efforts!