by danielsan
Questions about the process and manner in which Union leadership initiated a controversial referendum to return to work led to a rejection of the 'consulta' and the continuation of the five-months-and-running teachers strike
I expected the Zòcalo to be empty this morning (or at least quieter), but the plaza was filled with teachers reading the papers, which read 'Rechazan la consulta' (Teachers Reject Referendum). They're still on strike--because Union leadership announced the referendum before the base approved it, because Union leadership announced the results before it had been completed, because the 'results' didn't include the fact that thousands of teachers rejected the referendum outright, refusing to return results since they hadn't approved its circulation in the first place.

The numbers just didn't add up: There are 70,000 teachers in the Oaxacan Section 22 of the STNE (National Union of Education Workers). 25,692 approved the return to work today, October 23rd. 17,483 opposed it. That leaves a rather considerable number of 'undecided' or non participating teachers!! The PRIsta paper 'El Imparcial' claims that 'Radicals Impede the Return to Class,' but puts the number of teachers who rejected the very idea of the referendum at 20,000.

Now the numbers are starting to make sense.

Why would so many teachers refuse to participate? This referendum was forced on the teachers from above. They did not choose to hold it nor did they determine what would be asked. Enrique Rueda Pacheco, Statewide Director of the Union, is largely being held responsible. He announced on national television that the teachers had already approved the return to classes, and that the only thing left to be decided was the date. This is while the surprise referendum was still being circulated. He is a figure in the negotiations in the Capital, and it looks like he's made concessions ahead of his base... and for this he is getting a lot of heat. Already viewed with suspicion, he is now the subject of chants and signs, banners and marches. A new referendum will be put before the teachers tomorrow and Wednesday.

So the strike continues--and the teachers remain at the forefront. They stick to their demand: No return to work with URO claiming to be in power!
§foto del Centro
by danielsan 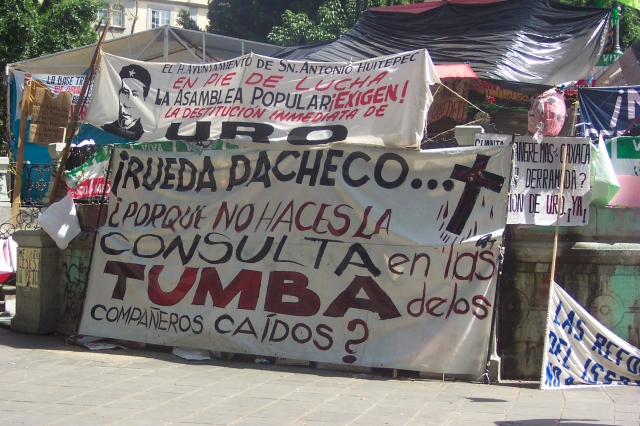 original image (2160x1440)
Banner in the Zócalo that reads
´Rueda Pacheco: Why don´t you do the referendum in the tomb of our fallen comrades??´

Rueda Pacheco could barely escape the Hotel in D.F. where the negotiations have been taking place due to the protests outside.
§tomba
by danielsan 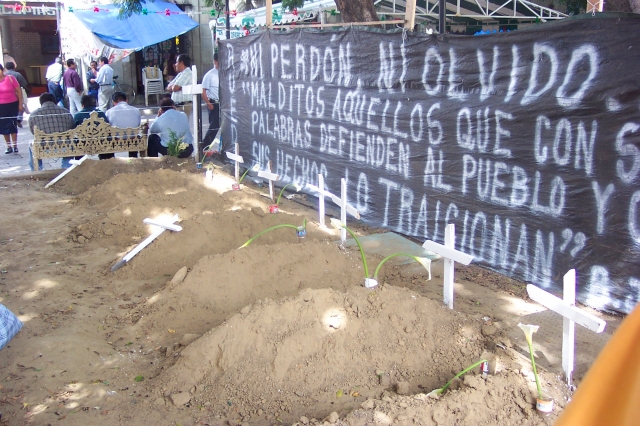 original image (2160x1440)
These symbolic graves were dug this morning in the Zócalo (where apparently a huge tree was cut down as part of URO´s ´beautification´ efforts) to symbolize the eight deaths suffered in a low-intensity war aimed at silencing dissent in Oaxaca.

Add Your Comments
Latest Comments
Listed below are the latest comments about this post.
These comments are submitted anonymously by website visitors.
TITLE
AUTHOR
DATE
a short week later
danielsan
Viva la resistance!!
musicmarc
Support Independent Media
We are 100% volunteer and depend on your participation to sustain our efforts!