Add an Event
Newswire
Calendar
Features
Home
Donate
From the Open-Publishing Calendar
From the Open-Publishing Newswire
Indybay Feature
Publish to Newswire
Add an Event
Related Categories: Santa Cruz Indymedia | Education & Student Activism
Weeping Wednesday: A Protest Against the UC Regents
by ~Bradley (bradley [at] riseup.net)
Sunday Oct 22nd, 2006 3:00 PM
The first big protests of the 2006-2007 school year at UC Santa Cruz took place on October 18th, 2006, the day the UC Regents came to visit campus. It had been five years since all 26 UC Regents came to UCSC. During the second demonstration of the day by hundreds of students outside the new Humanities Building at Cowell College, police pushed, swung and jabbed with their batons before taking three students hostage and hurling streams of pepper spray directly into the eyes of demonstrators. 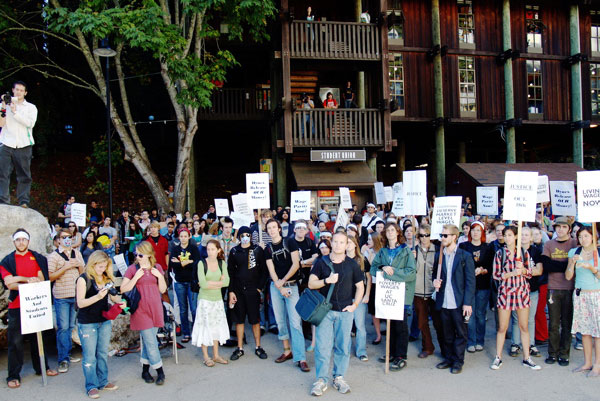 In the first protest of the day, which began at noon, AFSCME workers and students held a rally in the Bay Tree Plaza and then marched to the base of campus calling on UC President Dynes to release funds promised by the California Legislature to low-paid UC workers. AFSCME workers and students are also demanding wages comparable to those of neighboring colleges and universities where people are paid up to 30% more for doing the same amount or less work.

More information and photos from the first protest can be found by visiting:

The second demonstration of the day got started at 2:45pm with a rally in the Bay Tree Plaza. Hundreds of students then marched to the new Humanities Building at Cowell College. There, a community speak-out was held while the UC Regents, flanked by University police, made their way into the building. UC administrators told students that the public comment period was cancelled by the Regents because they were worried about the large demonstration taking place outside the new Humanities Building.

"one of many" students at the demonstration outside the new Humanities Building at Cowell College published a summary of the protest. Please read this summary:

The summary is "one student activist's attempt to provide one perspective of the story." I read the summary and feel that it is an accurate retelling of events.

Also, please be sure to read:

The article was authored by "concerned members of the ucsc community" and the text was extracted from a flyer passed out by organizers during the UC Regents protest.

We know that many in our community have serious issues that need to be communicated with the Regents. But we also know that the Regents have no real desire to address our concerns. It’s been 5 years since they’ve visited UCSC – and yet they just hold a couple short comment periods, giving us mere seconds to speak? Even this they do not because they’re interested in what we have to say, but because they’re required by law to hold public comment periods whenever they get together.

We’ve been to Regents’ meetings. We’ve made our speeches. We’ve tried to make them listen. But all they do is laugh, turn their backs, take naps, and kick us out of their meetings. The public comment period is not our few minutes of opportunity, but a farce intended to hold up an undemocratic and unaccountable system. When we reject this comment period and hold our own community speak-out, we are taking back our voices, taking back our university, and showing the world how we really feel. 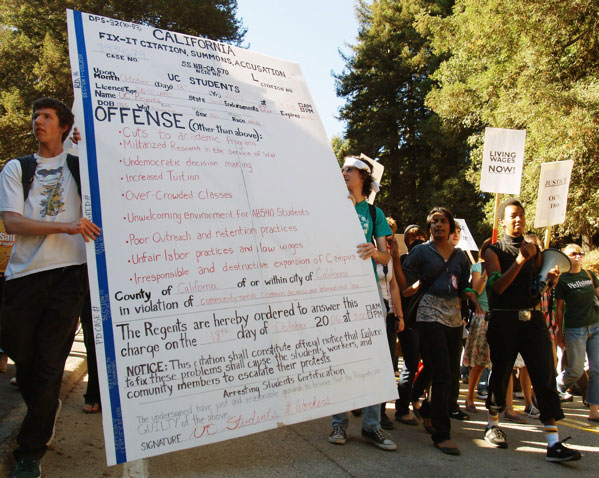 The action was an attempt to highlight the undemocratic, unaccountable, and illegitimate nature of the Regents, asserting the need to democratize the UC system, while demanding that the university fix a score of core problems before considering expansion.
* from Summary of Events
http://indybay.org/newsitems/2006/10/21/18322107.php
§Xing
by ~Bradley Sunday Oct 22nd, 2006 3:00 PM 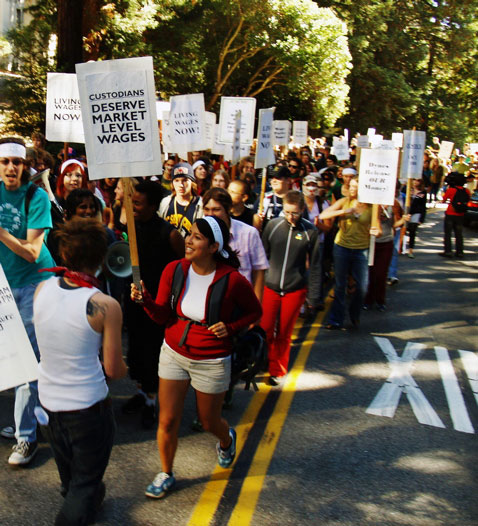 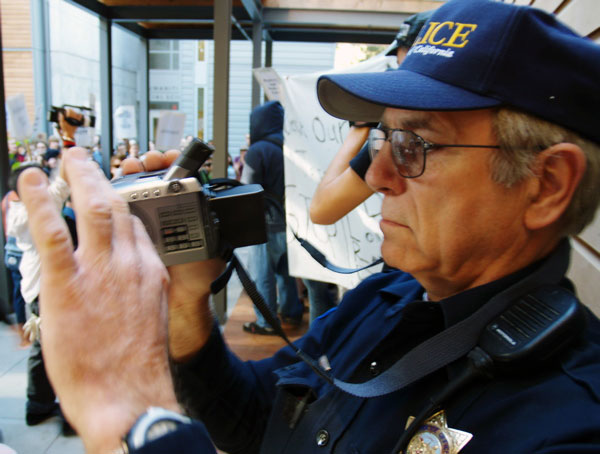 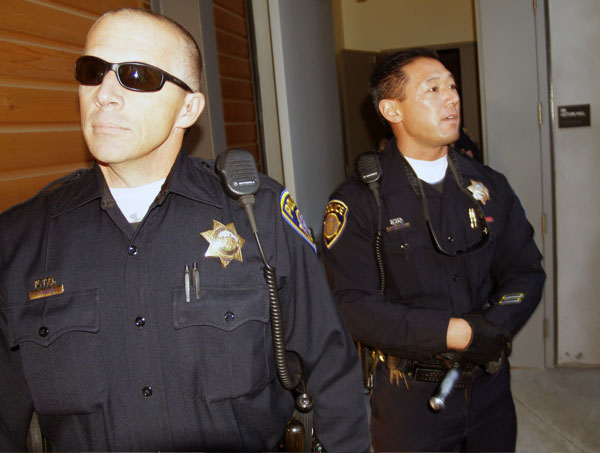 Brain Hughes (left) is looking sharp in his uniform on October 18th, 2006, but some people may also remember him as an infiltrator... 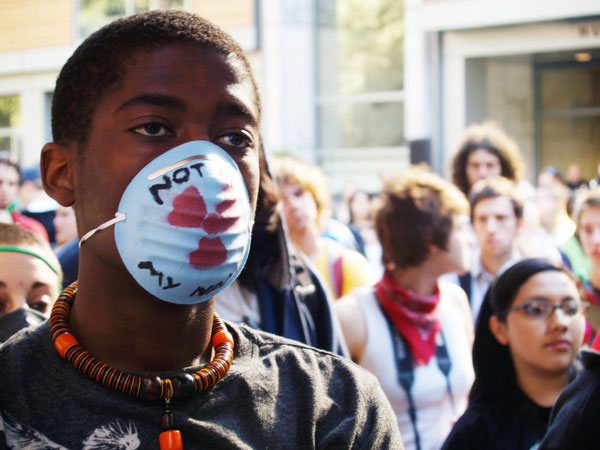 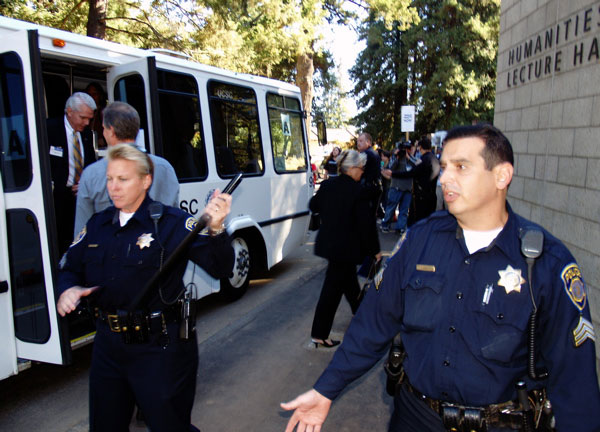 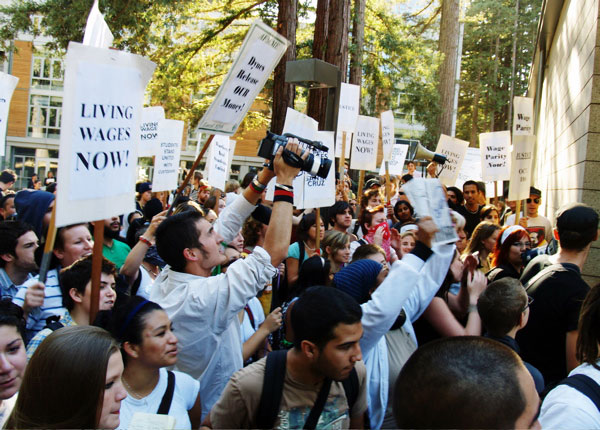 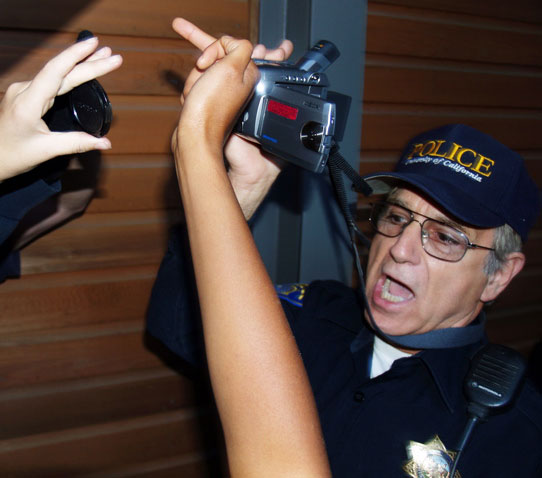 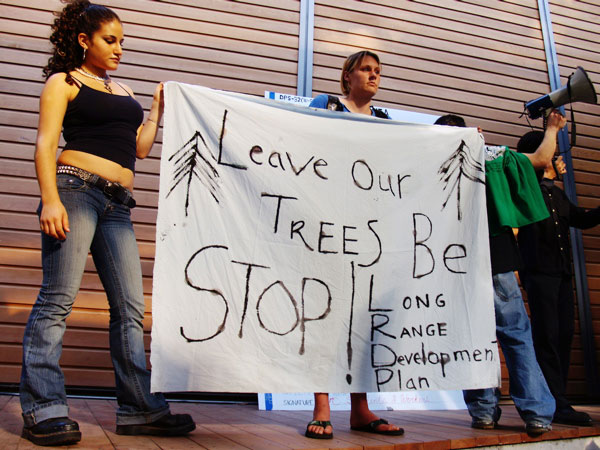 Leave Our Trees Be.
Stop!

UCSC Upper Campus is the wild, forested refuge located above the developed portion of the University, and bordered by Henry Cowell State Park, Wilder Ranch State Park, and the Pogonip City Park. The new LRDP (Long Range Development Plan) for UCSC calls for almost double the existing buildings on campus, and much of the planned expansion is aimed at the upper campus area. Learn more about the LRDP and resistance to it at thes “Undo UCSC” website:
http://www.resist.ca/~undo_ucsc/
http://indybay.org/newsitems/2006/07/09/18286694.php
§Humanities
by ~Bradley Sunday Oct 22nd, 2006 3:00 PM 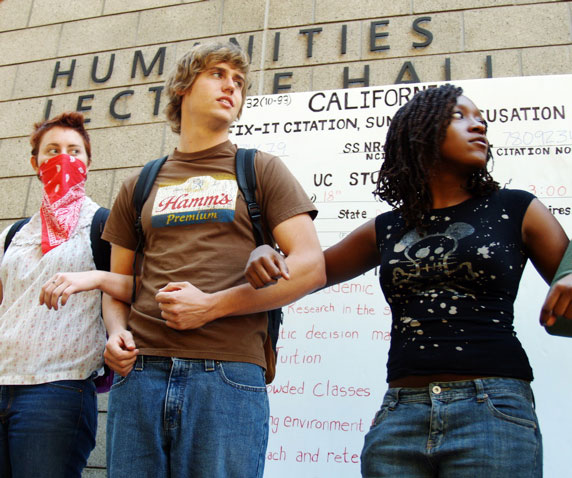 Through the humanities we reflect on the fundamental question: What does it mean to be human?
http://en.wikipedia.org/wiki/Humanities
§Linked
by ~Bradley Sunday Oct 22nd, 2006 3:00 PM 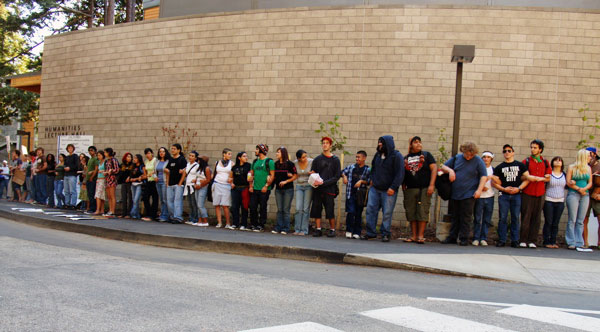 The action started with a rally at the Bay Tree Plaza, before marching up to the new Humanities Building at Cowell College. There, a community speak-out was held for a good period of time before more direct action was taken. Then, what was supposed to only have been a 30 minute 'public comment period' turned into a three hour standoff, as protesters, after a failed attempt to prevent the Regents' entry to the building, eventually encircled the area, blocking all 5 exits.
* from Summary of Events
§Organize
by ~Bradley Sunday Oct 22nd, 2006 3:00 PM 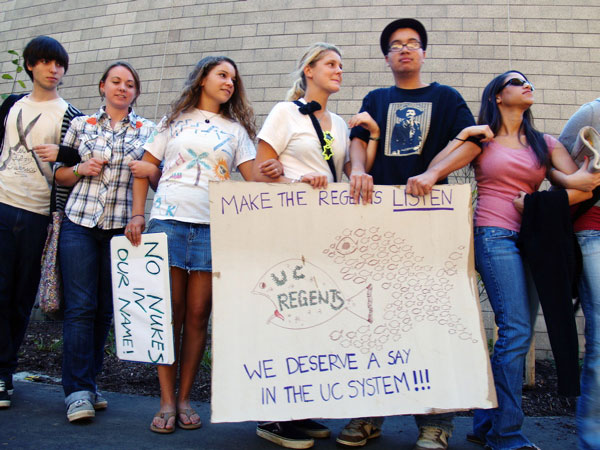 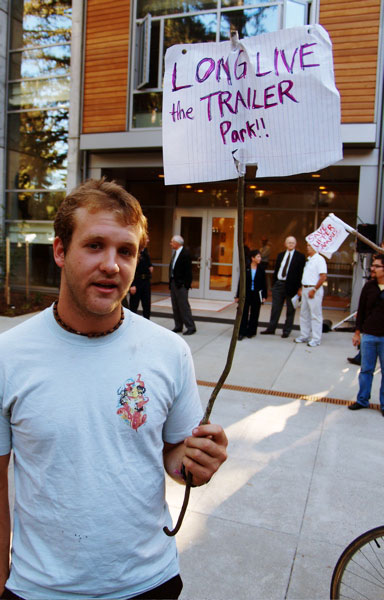 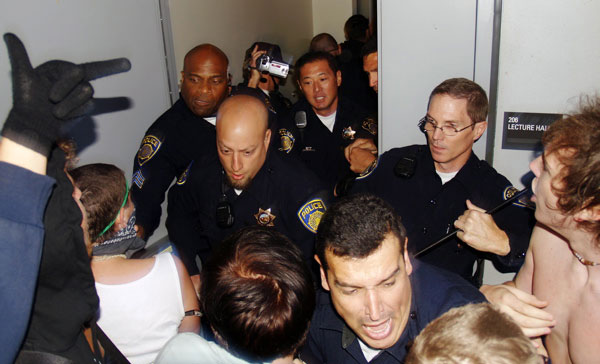 As protest tactics escalated and the police became increasingly angry and frusterated with their inability to control some of the protesters, they targeted three activists, took them to the ground, and dragged them inside the building. As students struggled to prevent the abduction of their friends, they were met with a barrage of batons and pepper-spray sent forth from the retreating officers.
* from Summary of Events
§Pain
by ~Bradley Sunday Oct 22nd, 2006 3:00 PM 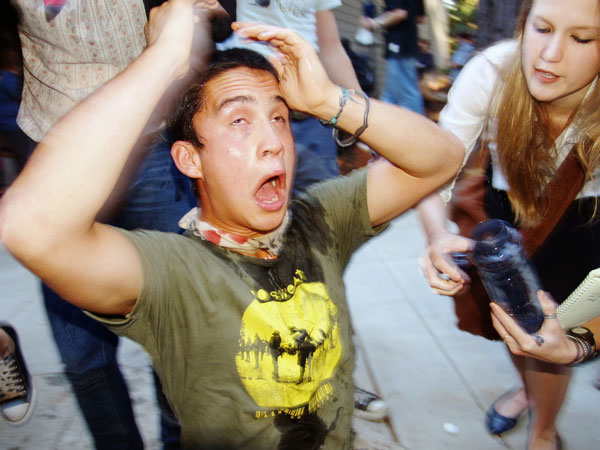 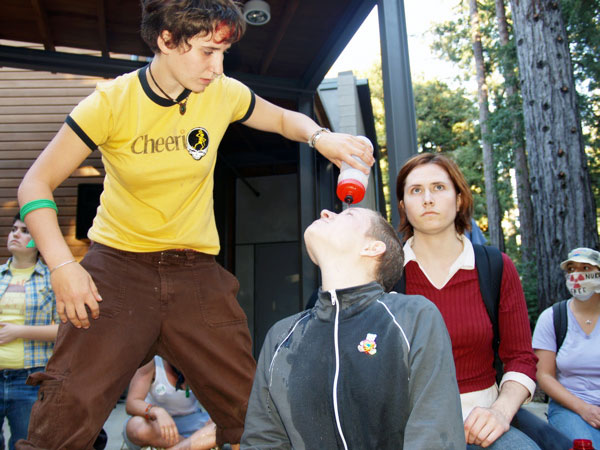 With the police inside and all doors closed, the stunned crowd sat dazed while a few students assisted those who who were hit by the cops and their pepper-spray.
* from Summary of Events
§Riot Squad
by ~Bradley Sunday Oct 22nd, 2006 3:00 PM More than 35 riot-cops from the Santa Cruz Police Department and Santa Cruz County Sheriff's Department were ready to dish out as much violence as they felt necessary to 'control the situation'
§Phil Gomez
by ~Bradley Sunday Oct 22nd, 2006 3:00 PM 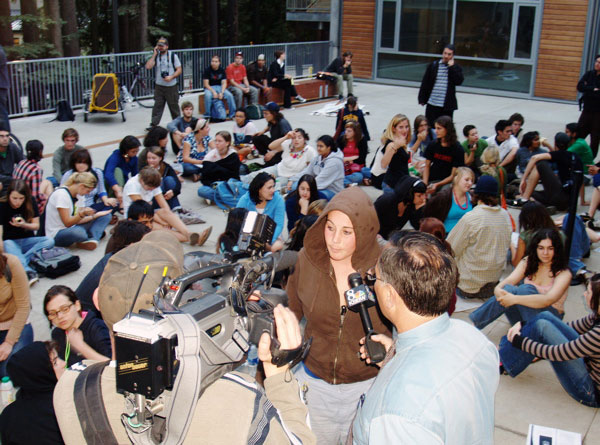 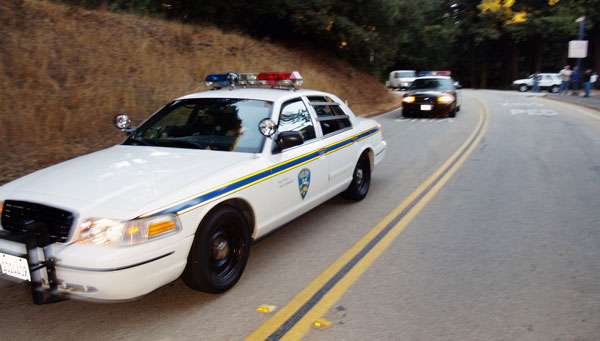 Students juggle as 'concerned parties' discuss what to do next...
* faculty, staff, administration, students and others
§Negotiating
by ~Bradley Sunday Oct 22nd, 2006 3:16 PM After a long period of negotiations involving students, workers, faculty members and the administration, a deal was finally made. First, a student and a faculty member would be allowed into the building to ensure that the 3 students detained inside were ok. Then, the students, who had agreed to the deal by a group consensus process, were to not cross a specific line and allow all the Regents and police to go out a back door into their University-supplied buses. Finally, the 3 detained students would be cited and then they, and the two sent in to check on them, would be released.
* from Summary of Events
§Waiting
by ~Bradley Sunday Oct 22nd, 2006 3:16 PM An odd sight this was. Hundreds of protesters, silent, standing behind an imaginary line, so as not to jeapardize the release of their friends. Some may say that this was a sign of compliance with authority but I see it a very different way - it was a sign of power. They proved that if they stand up and be bold, they can reclaim what is rightfully theirs. The only power that the administration and the police had was to abduct their friends - using violence and the threat of imprisonment to assert their control over the protesters. Keeping activist hostages in cuffs and in custody was their only way of ensuring that the students wouldn't interfere with the Regents not-so-sweet goodbye.
* from Summary of Events
§Going
by ~Bradley Sunday Oct 22nd, 2006 3:21 PM "Only 1 out of 26 regents is an actual UC student. Pretty shitty representation, don't you think?"

"You make bombs in Livermore! I aint paying tuition 4 that nonsense!"

"Our money, our decisions - not the regents"

"Our $ should not go toward the promotion of violent EDUCATION!"

"No money for bombs! No taxation w/o representation"

"Only 15 minutes? What are they afraid of? We should have a say in our money and our education. this is a democracy"

"No nuclear weapons in the UC name!"

"I want my money for my education! (not nukes)"

"We deserve a say in the UC system"

"Cut the connections with Livermore & Los Alamos Labs. We do not support Bio/Nuclear weapon creation! Listen to the people, we oppose site 300!"

Excerpt from Wikipedia about LLNL and Site 300:

LLNL's main facility is located on a one-square-mile site in Livermore, CA. A larger (10 square miles) remote explosives/experiments testing site (Site 300) is situated 18 miles to the east. Lawrence Livermore has an annual budget of about $1.6 billion and a staff of over 8,000 University of California employees, as well as 1,500 contract employees. Additionally, there are approximately 100 DOE employees stationed at the laboratory to provide federal oversight of LLNL's work for the DOE.
Add Your Comments
LATEST COMMENTS ABOUT THIS ARTICLE
Listed below are the latest comments about this post.
These comments are submitted anonymously by website visitors.