by Mike Rhodes (MikeRhodes [at] Comcast.net)
The homeless issue has reached a new level of significance in Fresno as the homeless and their supporters are starting to take action to defend their civil rights. First, a lawsuit was filed by several civil rights legal groups against the City of Fresno to stop the attacks against the homeless. Late last week a Federal judge issued a Temporary Restraining Order to stop the police from taking the homeless peoples possessions and immediately destroying them. Yesterday, there was a rally in support of the homeless at City Hall. The details are in the story below. 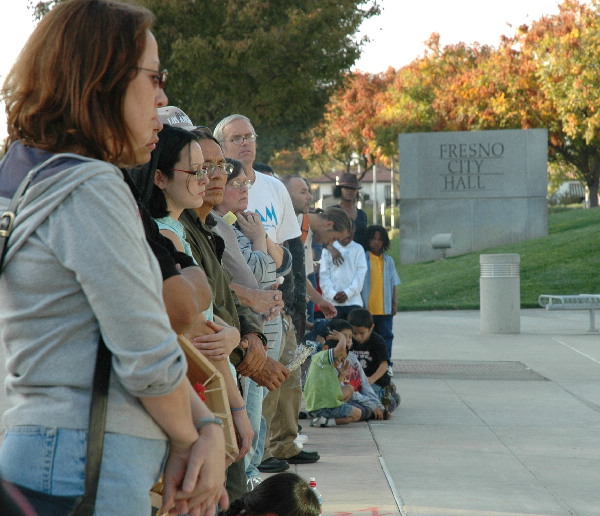 Fresno Homeless Camp out at City Hall
By Mike Rhodes

There were more people sleeping under the stars in Fresno last night than usual and the sidewalks were equally cold and hard to both the homeless and homeless advocates who spent the night at Fresno City Hall. The camp out began as over a 100 people came to the steps of Fresno City Hall to bring attention to the harsh conditions the homeless experience in this city. In addition to camping out, participants heard prayers, gave testimonials, shared food, sang, and listened to music. They were hopeful that the attention to the issue of homelessness would move the city to adopt a more humane policy.

Last week a lawsuit was filed against the City of Fresno who has taken an increasingly aggressive and hostile stance toward this city’s homeless. The lawsuit seeks to stop the city from taking and immediately destroying homeless peoples property. A Temporary Restraining Order was issued in Federal Court to stop the city from using bulldozers which scoop up and destroy tents, medicine, clothing, and anything else in their path. The homeless are also constantly harassed by the police who stop and search them, run their ID through the data base for outstanding warrants, and force them from one location to another.

The police were also very present last night at City Hall. There were police on motorcycles who drove them up and down the sidewalks, they were parked in patrol cars across the street, and they were in bicycle teams that made sweeps through the crowd. At one point they asked for the person in charge and proceeded to warn him that the sprinklers “might” come on unexpectedly during the evening.

Food Not Bombs served food and the Sleeping Bag Project brought clothing, blankets, and sleeping bags. Anarchist collectives from Fresno and Modesto hung banners from the balcony of City Hall, the most provocative one reading “Arm the Homeless.”

The event was primarily organized by Rev. Floyd Harris, California State president of the National Action Network. Rev. Harris led a prayer at the beginning of the event which was followed by a short Native American ceremony and song, This was followed by the entire group singing This Land is Your Land.

Sunday, October 22
11 AM
SPIRITUAL SERVICE AT TENT CITY
"G" and Monterey, Fresno : Join our brothers and sisters in prayer to stop homelessness in this
land of richness.

For more information about recent events affecting the homeless, see: 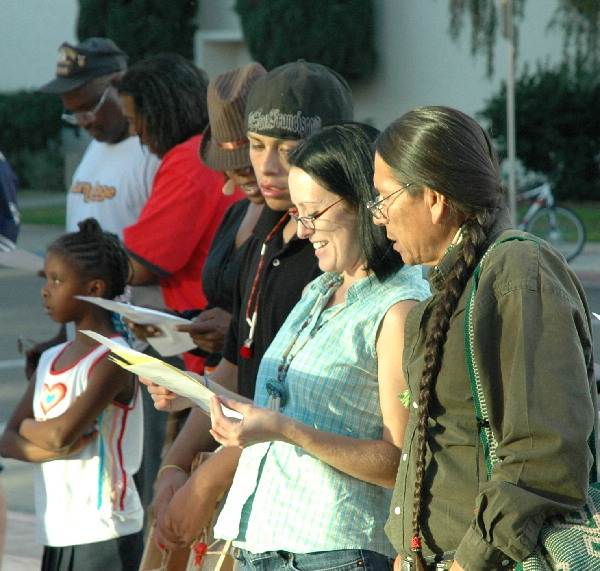 This Land is Your Land, this Land is my Land...
§Jean Chipp
by Mike Rhodes 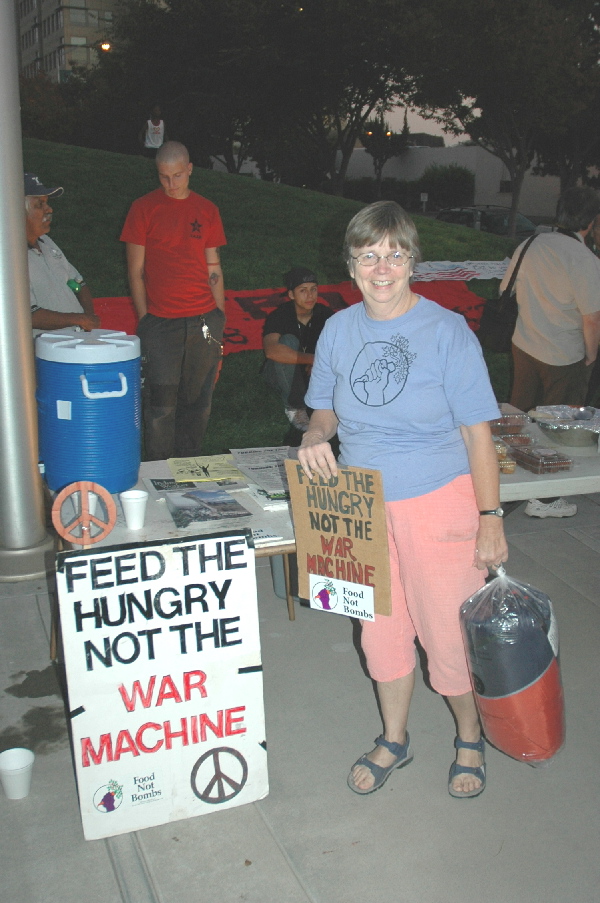 Jean Chipp is the coordinator of the Sleeping Bag Project, which brought clothing, blankets, and (of course) sleeping bags for the homeless. Jean also works with Food Not Bombs.

§The Police Make Their Presence Known
by Mike Rhodes 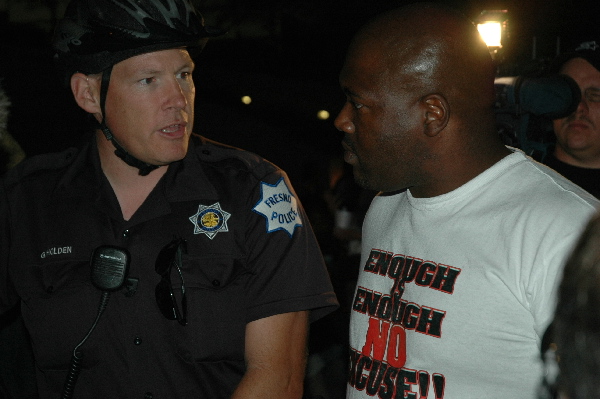 This officer is telling Rev. Harris that the sprinklers “might” be turned on at City Hall last night as people try to sleep. Fortunately the water did not get turned on.

§Arm the Homeless
by Mike Rhodes 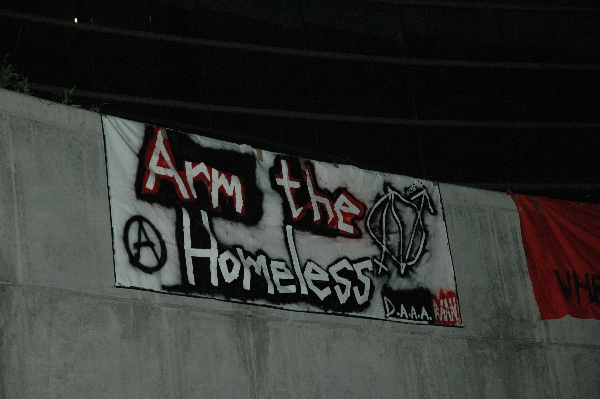 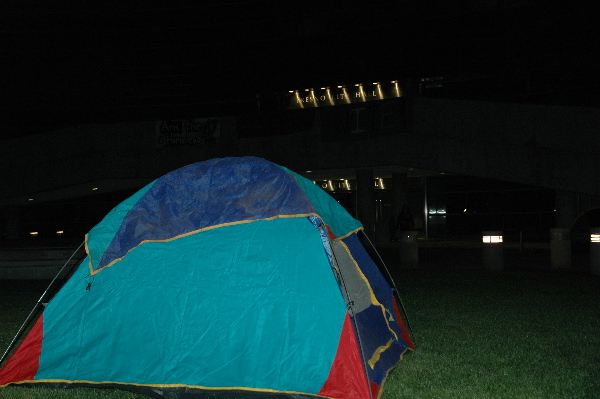 While most people slept on the concrete, these brave souls risked a midnight shower from the sprinkler system. About 50 people spent the night at City Hall Saturday night. All photos by Mike Rhodes.

Add Your Comments
Comments (Hide Comments)
§Expression of freedom and class solidarity rare at City Hall
by Ash
This Saturday a spiritually and politically diverse coalition of Central Valley organizations came together to show solidarity with our homeless community members and other targets of police violence. Exercising our right to assemble on the grass of City Hall, watched by teams of bike, squad, and motorcycle cops throughout the night, this coalition challenged an irresponsible city and trigger-happy police force. Prayer circles and testimonies included a speech about the disrespect shown the people of Fresno by those who should serve and protect the community, all of the community, and the need for balance of power in order to form a healthy and just society. A free meal cooked by both of Fresno’s Food Not Bombs reminded us of a basic human right neglected in our Constitution, that of our right to simply eat. Several organizations braved the cold night with those who do not have the privilege of a home to return to after the weekend. Homeless members of our community and several organizations camped out on the lawn of City Hall including the weekend’s organizers National Action Network and Comite No Nos Vamos, local churches and peace groups, as well as local anarchist collectives Sunday Food Not Bombs, the Collective for Arts, Freedom, and Ecology (C.A.F.E.) and Modesto’s Direct Action Anti-Authoritarians (D.A.A.A.) and Reds and Anarchist Action Network (R.A.A.N.). Musicians played songs about solidarity and human equality while banners put up by members within these total liberation collectives called for unity of all people and asked F.P.D. where’s the love? A third notable banner stated, “Arm the Homeless.” Hung from the balcony of City Hall one might interpret these three together as a challenge to a system that puts power in the hands of a chronically abusive police force and a city that accepts the neglect and harassment of our homeless and low- income sisters and brothers.
Add a Comment
§What else was out there?
by comrad
This story leaves out that there where Three different Food Not Bombs collectives serving food that night, two from Fresno and one from Modesto. Collective members from C.A.F.E. (Collective for Arts Freedom and Ecology) that are also apart of the Sunday meal of Food Not Bombs! Brought an entire kitchen to city hall and cooked and entire Dinner on site in order to provide a healthy VEGAN meal to people all night long. The Saturday meal of Food Not Bombs! brought food and clothes and Modesto brought food and helped to other collective members cook on site.

The author of this story focuses on one banner hung by anarchist that calls people to "arm the homeless." Thease where the same anarchist that provided deliciouse murder free food all night long! This banner was also one of many other banners read, "FPD where's the love?" and "UNITE!." The banners where meant to cause discusion and call attention to the fact that the homeless are on there own in Fresno and are considered enamies of the state.

October 21st showed how people can come together and create a campaign to help our sisters and brothers that are abused and in need. Next time lets stay in front of City Hall until the city builds public shelters, low income collective familly housing, skill training, free school, mental and physical health care, and an adiquite healthy food source such as community gardens and collective groceries. Lets not forget that shelter and food are basic human rights and in a country such as the U.S. no person should have to worry about if they can afford treatment when they get sick.
Add a Comment
§well, it is an awesome banner
by luci
nice work, guys. it's great!
Add a Comment
§An Alternative to Capitalism (which will end homelessness)
by John Steinsvold (steinsvold2 [at] verizon.net)
The following link takes you to an essay titled: "Home of the Brave?" which I wrote and appeared in the Athenaeum Library of Philosophy: