A Victory for the Homeless in Fresno

by Mike Rhodes (MikeRhodes [at] Comcast.net)
Homeless residents of Fresno won a victory today in Federal court. A temporary restraining order was issued that stops the City of Fresno from taking and destroying homeless peoples property. Under this ruling, the city is prevented from using their bulldozers to destroy encampments, like the one below (this photo was taken in May 2006). 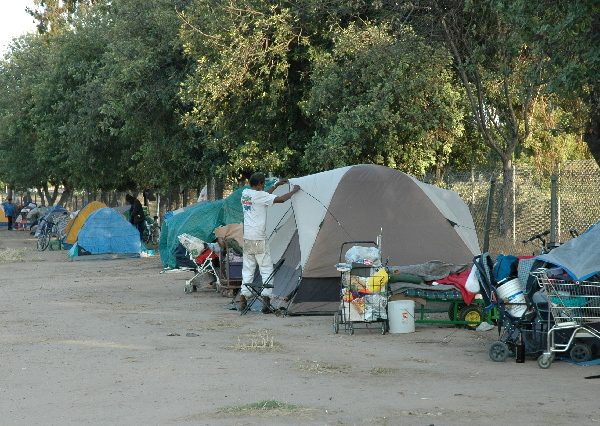 A Victory for the Homeless in Fresno
By Mike Rhodes

The City of Fresno was issued a temporary restraining order (TRO) today that will stop them from seizing and destroying poor peoples property. The practice of attacking homeless encampments, like the one in the photo above, was challenged in a lawsuit filed on Tuesday, October 17. See: http://www.indybay.org/newsitems/2006/10/17/18321050.php for background on the lawsuit. The hearing today was before judge Oliver W. Wanger in the United States District Court, Eastern District of California.

The lawsuit, filed by the Lawyers’ Committee for Civil Rights, the ACLU of Northern California and the law firm of Heller Ehrman, LLP says that clothing, medication, tents and blankets, as well as irreplaceable personal possessions, such as family photographs, personal records and documents have been destroyed by the City of Fresno in these raids. Paul Alexander, with the Heller Ehrman law firm argued that without a TRO, the City of Fresno was likely to continue these attacks that result in the taking and destruction of homeless peoples property.

In arguments before the court this morning, Alexander said that the Fresno Police Department had lined up homeless residents last Wednesday (October 11,2006) and told them they were going to return and destroy their property. He cited a declaration from Fresno Police Department Captain Greg Garner stating that they have had complaints about the homeless in that area but they have not acted yet. Alexander stated that Garner’s declaration does not say they won’t return and destroy the homeless peoples property, it says "we have not acted yet."

The judge asked Fresno City Attorney Jim Betts about their "found property procedure." Betts said the city does have a policy but that he did not have it available. Both Wanger & Alexander said it was unlikely that the written policy would allow for the immediate destruction of peoples property by the city. Alexander cited the Pottinger case ( see: http://osaka.law.miami.edu/~schnably/pottinger/pottinger.html ) in Miami that specifically addressed the issue of the confiscation of homeless peoples property by the police. A recent case in Los Angeles was also cited as evidence that the police do not have the right to take and destroy homeless persons possessions. Alexander said California civil code 2080 states that if the police take a citizen’s property they must give the owner every opportunity to recover them. Items must be stored for at least 90 days.

Judge Wanger said that he did not think the police should be put in the position of deciding what was valuable property or not. He said "one man’s treasure is another man’s junk." City of Fresno Attorney Jim Betts made two points; these incidents are not happening on city property and they are only responding to residents complaints.

Betts claimed the homeless were illegally camping on private property and that they (the city) have received numerous complaints. He argued that the city always gives written and oral warnings when a "clean up" is about to take place and that they work with the Poverello House and Rescue Mission to make sure the homeless know when the next attack is coming. Betts argued that the city’s response was compassionate.

In arguing against the issuance of a TRO, Betts said it "would unduly burden the city to the point that they would not be able to respond to property owners complaints." Judge Wanger said that the 4th and 14th amendments to the U.S. constitution and state law protect citizens from having their property taken and destroyed without due process and that sometimes those rights will cost the city money, in this case for storing confiscated property. The judge did not say that the city could not take homeless peoples property, but that they can’t immediately destroy it. Issuing the TRO, Wanger said "the court does find that the property rights, shelter, clothing, ID, and other items justify the intervention."

Betts then asked the court if the homeless could be made to post a bond to insure against damages incurred by the TRO, if the city ends up winning the case. Judge Wanger pointed out that the homeless have no resources to post a bond and that the public interest would be served by waiving the bond. Wanger said a court date would be set to hear arguments for the preliminary injunction on the week of November 5.

There were several homeless people in the Federal Courtroom, when the TRO was issued. They were all excited to have won a victory in this struggle for their civil rights. As news of the TRO spread to the homeless encampments in downtown Fresno, it brought hope and encouragement to those who have suffered by the city’s relentless attacks.

Community activists and the homeless are organizing a series of events to draw attention to conditions in Fresno. Those actions are listed below:

Saturday, October 21
4 PM
PRAYER CIRCLE (at Fresno City Hall)
Join us in a circle of prayer to raise City Hall’s conscience on how their "quality of life" ordinances allows the police power to target and abuse people

5:30 PM
RALLY
Support the homeless at the new Tent City to be located at the steps of Fresno City Hall.

7 PM
TESTIFYING
Listens to people testify why they are homeless, listen to their stories of how the police abused them with the blessings of city hall

8 PM
MUSIC, POETRY, AND SPOKEN WORDS
All are invited to participate! FOOD NOT BOMBS FOOD!

9 PM
ALL NIGHT VIGIL ON THE STEPS OF CITY HALL
Candles, prayers, and dreams for justice and shelter for the homeless

Sunday, October 22
11 AM
SPIRITUAL SERVICE AT TENT CITY
"G" and Monterey, Fresno : Join our brothers and sisters in prayer to stop homelessness in this land of richness. 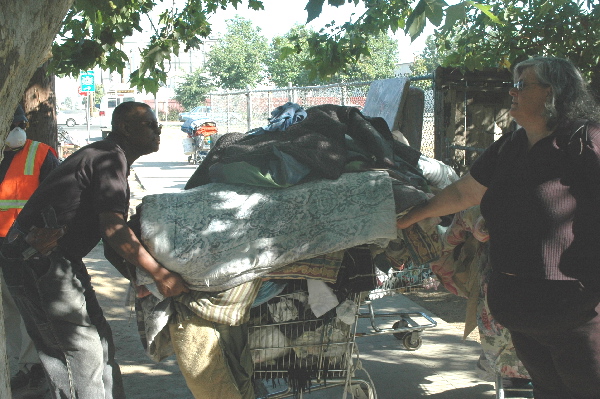 Fresno Police Department officer Rey Wallace fights with community activist Liza Apper as he attempts to destroy this shopping cart and all of the possessions inside.

§Another Shopping Cart Bites the Dust
by Mike Rhodes 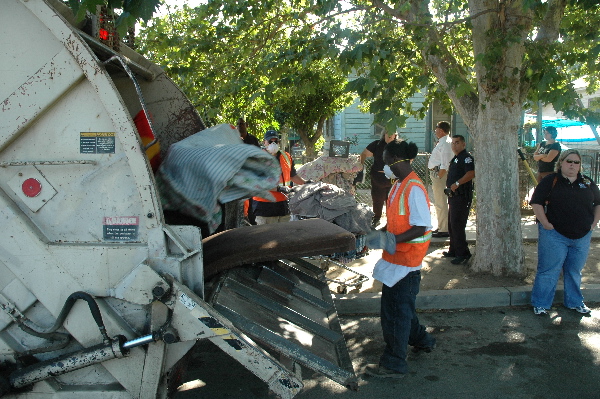 City sanitation workers throw another shopping cart in the back of a garbage truck. All photos by Mike Rhodes
Add Your Comments
Latest Comments
Listed below are the latest comments about this post.
These comments are submitted anonymously by website visitors.
TITLE
AUTHOR
DATE
Never too late to respond to this . . .
Christi
how do you know the shopping carts were stolen?
luci
Hey oaktown
homeless advocate
Whose property?
oaktown old boy
Support Independent Media
We are 100% volunteer and depend on your participation to sustain our efforts!