Add an Event
Newswire
Calendar
Features
Home
Donate
From the Open-Publishing Calendar
From the Open-Publishing Newswire
Indybay Feature
Publish to Newswire
Add an Event
Related Categories: International | Fault Lines
Shaking Uncontrollably: Cheaper than Psychotherapy
by Liam O'Donoghue (shakinguncontrollably [at] gmail.com)
Tuesday Oct 17th, 2006 10:35 PM
There’s nothing funny about war, human suffering, hypocrisy, government abuse of power or environmental devastation. Unfortunately, there’s no escaping these harsh aspects of our existence either. Unless you’re totally isolated, you’re confronted with anger, greed and violence constantly, either in real life or through the media. Even if you live in a cave by yourself, there’s no way to hide from the pain that’s inherent to existence, the dark side of your own nature. So why am I responding to these depressing and unfortunate news stories with humor? 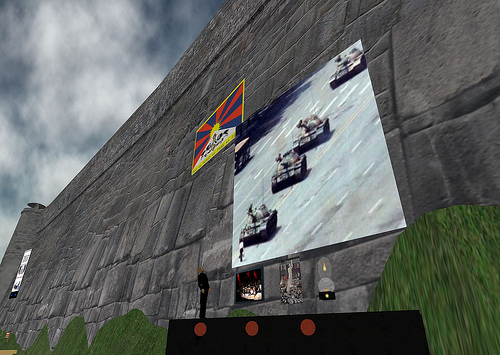 Everybody needs an outlet or they’ll explode. Some folks drink, some channel their emotions into negativity and lash out at the world. Others jump out of planes or make art. Personally, I feel that life’s too short to be pissed off all the time and I don’t have very good hand-eye coordination, so I crack jokes. I’m not trying to change the world, I’m just trying to open some eyes and make a few people smile for a minute or two. Hope you enjoy this week’s little therapy session:

Silly Reporter: Last week when a reporter asked if President Bush believes that he made any mistakes regarding North Korea,White House Press Secretary Tony Snow responded “Oh, my goodness…it’s a silly question.” Snow then pinched the silly reporter’s cheeks, tussled his hair playfully, patted him on the bottom, and told him to run along and be a good little media flack.

No Like Big Words: When a reporter asked Bush about the accuracy of his tendency to describe Democrat’s policy on Iraq as “cut and run,” Bush responded by basically admitting that he’s a dumbass. He said, “…Nobody's accused me of having a real sophisticated vocabulary. I understand that. And maybe their – their words are more sophisticated than mine, but when you pull out before the job is done, that's cut and run as far as I'm concerned.” However, Bush did endorse “pulling out” as a legitimate contraceptive method.

Viral Politicking: Candidates are flocking to MySpace in order to attract young voters and solicit donations, according to The Wall Street Journal. "It's the holy grail of politics," said Utah Democrat Pete Ashdown, who is running for a congressional seat. In order to capitalize on this trend, Hillary Clinton has hired MySpace “celebrity” Tila Tequila as her campaign manager. To counter, John McCain has hired My Chemical Romance to “warm up the crowd” on his upcoming campaign tour. Meanwhile, MySpace owner Rupert Murdoch is rubbing his hands together and laughing devilishly.

Assassination Narrowly Averted: Last week federal agents pulled a 14-year-old out of class to interrogate her about comments she posted about President Bush on her MySpace page. Sacramento resident Julia Wilson posted a cartoonish photo-collage of a knife stabbing the hand of the president. Beneath the words "Kill Bush" last year, but had removed the photo months ago. Phew! Sounds like a close call. A few hours of waterboarding in one of the CIA’s “black sites” (secret torture facilities) should straighten out this little jokester.

Weed Warriors: Taliban fighters in Afghanistan are using the cover of 10-foot high marijuana jungles to hide from Canadian troops. According to a Canadian general, the heat given off by the plants makes it difficult to track the Taliban using thermal devices and the lush weed plants have withstood attempts to burn them using white phosphorus and diesel (They should have just called in Whitney Houston and Willie Nelson, that weed would have been gone in a few hours). Anyway, since they can’t destroy the plants, the Canadian soldiers have resorted to camouflaging their vehicles with stalks of the sticky-icky-icky. They’ve also been listening to a lot more reggae lately.

Use Coke, Get Skinny: Coca-Cola announced last week that Enviga, its new green-tea beverage, will actually burn calories. Apparently, the combined affect of the caffeine and a green tea extract in the product, which hits shelves nationwide in January, can burn 60 to 100 calories with three 12-ounce servings. “It represents the perfect partnership of science and nature," said Dr. Rhona Applebaum, Coke’s chief scientist. For those who can’t wait for this revolutionary new drink, try sprinkling some crystal meth in your next batch of Kool-Aid.

News Flash: Corporate Media Detaches Even Further From Reality: News service Reuters is opening a news bureau in the wildly popular simulation game Second Life this week. Second Life is a virtual, three-dimensional world where users create and dress up characters, buy property and interact with other players. Well, with real-life newsrooms drastically shrinking due to media consolidation, shifting coverage to an escapist video games universe seems like a simple choice for this international media institution. I’m sure that governments and PR companies are thrilled.

§Bush's Vocabulary
by Vigilante
(Vigilante.Sozadee [at] gmail.com) Wednesday Oct 18th, 2006 6:47 AM
On Bush's vocabulary: One thinks in words. An admission of an unsophisticated vocabulary is admission of unsophisticated thinking ability. This is an admission of our POTUS that he can't grasp nuances, complexities, conflicts. What does this say about his pretension of having "big", bold ideas?
http://the-vigil.blogspot.com/
Add a Comment
§Taliban Weed
by Allan Erickson
Thursday Oct 19th, 2006 12:01 PM
That Afghani weed?

That is a field of HEMP. HEMP!

The Canadians could have inhaled the whole field and received nary a buzz. Of course I wouldn't recommend smoking burning diesel fuel and white phosphorous either...

OF course the headline should have been:

HEMP, Strong Enough to Stop the Canadian Army!
http://www.mapinc.org/
Add a Comment
Support Independent Media
We are 100% volunteer and depend on your participation to sustain our efforts!