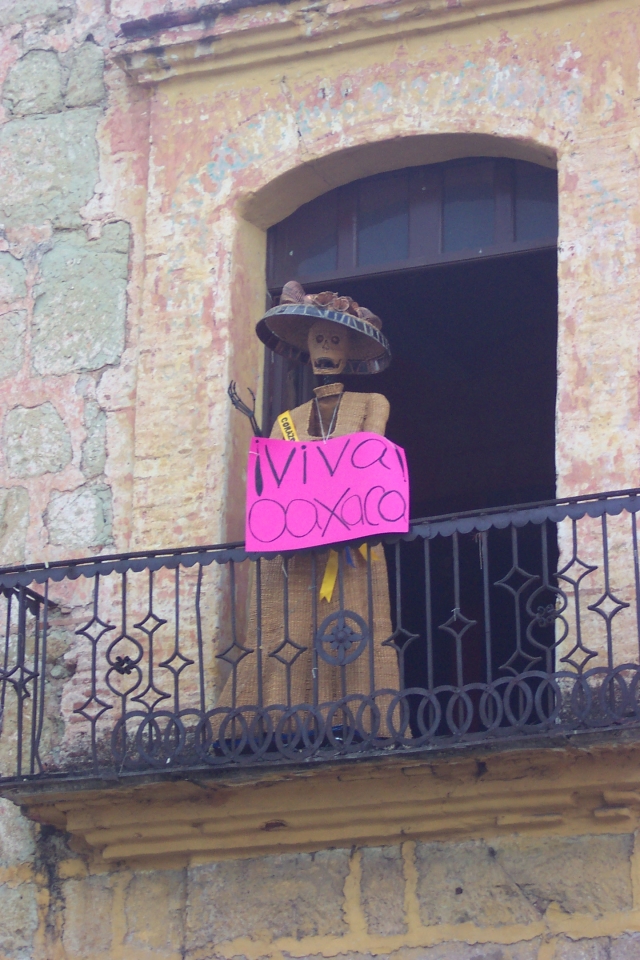 original image (1440x2160)
These days there is alot of speculation and rumor, waiting for the outcome of the negotiations happening far away in the Capital City (Ciudad de México, D.F.). There are propositions, leaked deals, and infinite possibilities, and some impatience, too. But nothing is concrete yet. Each side has a central demand, but at this point it isn´t clear whether a deal can be made: APPO and the people of Oaxaca have made perfectly clear that Governor URO cannot remain in power, since he has not been in power for several months now. Any step forward depends on his resignation, voluntary or otherwise. The Government, ruled by a coalition of the PRI and the PAN parties, demands the abandonment of the central plaza (Zócalo). Obviously there are many more demands, but those two seem central and foremost to each side at the bargaining table. Seems like an equitable enough trade, but...

In calling for Ulises Ruiz Ortiz´s permanent and formal ouster, people have varied cause: most cite his culpability in the June 14th desalojo (eviction) of the Zócalo that resulted in several killings by the government. His patently fraudulent election is also a given, since the PRI has held power here in Oaxaca (and in several states) despite losing Federal power to the PAN when Fox was famously elected a few years back. [For decades, the PRI returned 100% election results victories in several states in México, but primarily in indigenous-majority states like Oaxaca, Chiapas, and Guererro] There are also numerous stories of corruption: some fishy mining deals, money extracted to Swiss banks, etc. He´s a scapegoat, and as a tag I saw today put it, Ùlises de cara a la corrución´ (Ulises gave a face to the corruption).

Today I read stories in El Noticias about the escalating protests at Mexican embassies in California, including the formation of APPO-LA and APPO-San Diego. These stories of solidarity amongst emigrated Oaxaqueñ@s gives heart to cross & contra border organizers everywhere. I´ve also read about further action in other cities in Oaxaca state. Continuing protests against the presence of the Méxican Navy on the Pacific Coast of Oaxaca, protests taking over government posts in Ixtepec and other Oaxacan cities, which brings me to the big news of the day (yesterday), when four people were shot during a protest at the SEPROCI office (Secretary of Citizen Protection).

A delegation of federal Senators and Congresspeople is in town, observing the city as part of the negotiations with APPO. As the past few days had been spent in expectation, in recovery, in waiting for word from DF, yesterday people decided to ramp it up and get busy again, as there was a delagation in town. Thus all the painting you´ll see below. The call was to demonstrate the INGOVERNABILITY (ingobernabilidad) of Oaxaca and the strength of public support and continued resiliance. It seems to have motivated APPO supporters.

A large group comandeered a couple of buses and rode around the city from government office to government office (most had already been closed and occupied, some had been returned to the gov´t, some had been left alone until yesterday), taking over the buildings and protesting the corrupt government, in particular the continued incarceration of several organizers arrested both at the June 14 desalojo and since (One captured student was recently released after detention and torture at the hands of the federales). But while `president elect´ Calderon presents his 2030 plan for the development of México and `lame-duck president´ Fox says that he´ll set up a fund to restore the tourism industry in Oaxaca (what a plan!), a car-load of thugs got out and opened fire on the protesters, shooting two in the leg, another had a wound to the head (looks like a ricoche?) and another unknown (to me) injury.

These small skirmishes have been the only violence in recent weeks: some of the faces of the thugs are apparently starting to look familiar. Some people who were at the CEPROCI office said that the shooter was the same as the man who shot at protesters a couple weeks ago when URO was apparently in town at a local hotel. There have been drive-bys at barricades in the evening.

But large scale violence is something everyone wants to avoid, obviously, and even as people grow impatient with the negotiations and the difficulties of living with a `government´ built on concensus and participation (APPO declared itself the governing power several weeks ago), everyone hopes for a peaceful solution, and while many look to the talks in DF with some scepticism, all have hope for a positive outcome.
§para tod@s todo
by danielsan Thursday Oct 12th, 2006 11:48 AM 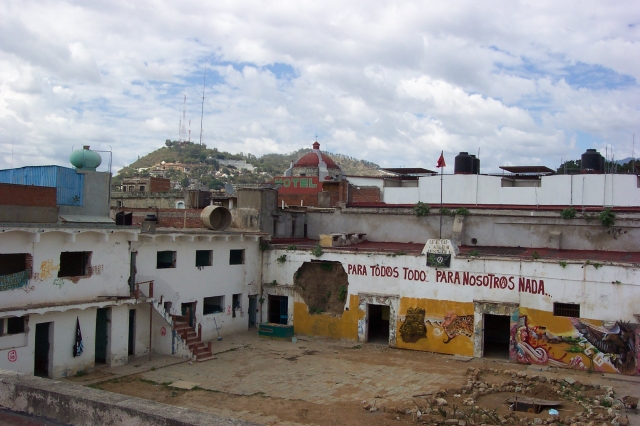 original image (2160x1440)
`Para tod@s todo, para nosotr@s nada´ is a saying popularized most recently by the Zapatistas of neighboring Chiapas: it means `Nothing for ourselves, everything to everyone.´
The use of the ampersand (@) is a radical and feminist use of written language to subvert gender binaries, in other words, by ending a word with a character including both an A and an O, a word ending with @ applies to all genders, rather than using `you guys´ or another male-gendered plural word that is supposed to apply an entire group.
§venceremos, joven
by danielsan Thursday Oct 12th, 2006 11:48 AM 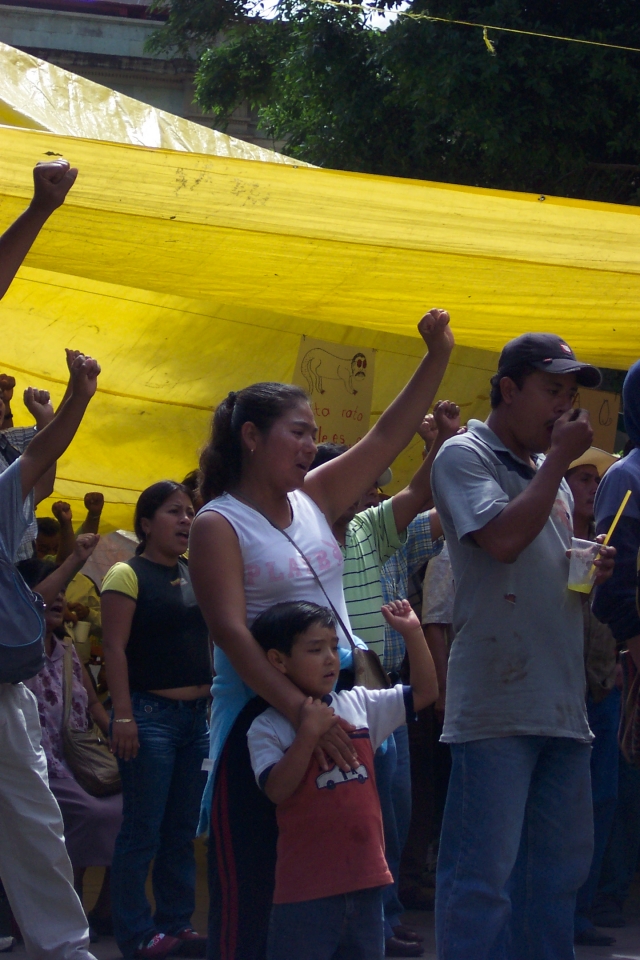 original image (1440x2160)
This march of bloqueadores reached the central plaza (Zócalo) around midday yesterday, before the violence broke out.
§venceremos
by danielsan Thursday Oct 12th, 2006 11:48 AM 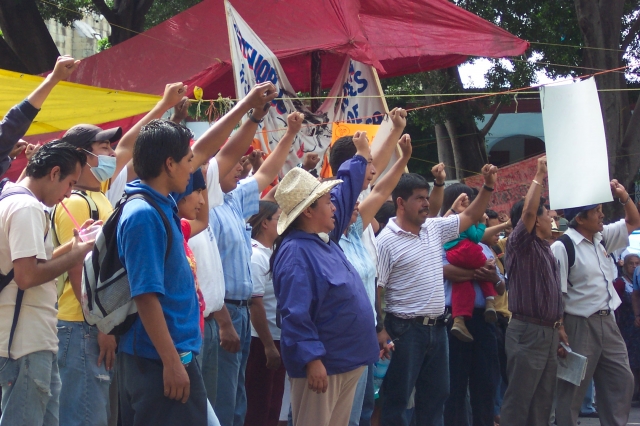 original image (2160x1440)
They sang and cheered and rallied, raising the spirits of those assembled in the Zócalo, reading the news, talking, resting, sewing, and preparing for the next stage in Oaxaca´s popular assembly.
§maestras y obras
by danielsan Thursday Oct 12th, 2006 11:48 AM 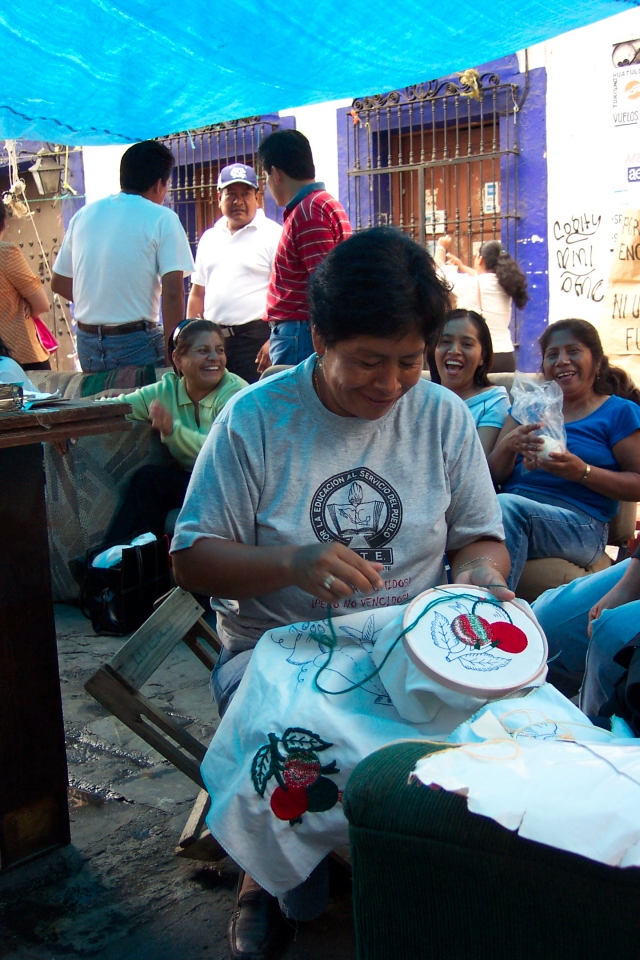 original image (1440x2160)
I sat and talked with these teachers, who have been on strike for more than 142 days now. A group of them sewing outside the post office, under a tarp shade structure, sitting on couches and talking and planning, they were quite curious about why the people of the US--teachers in particular--have not risen up against George Bush and stopped the war(s) being fought in our name.
§maestras
by danielsan Thursday Oct 12th, 2006 11:48 AM 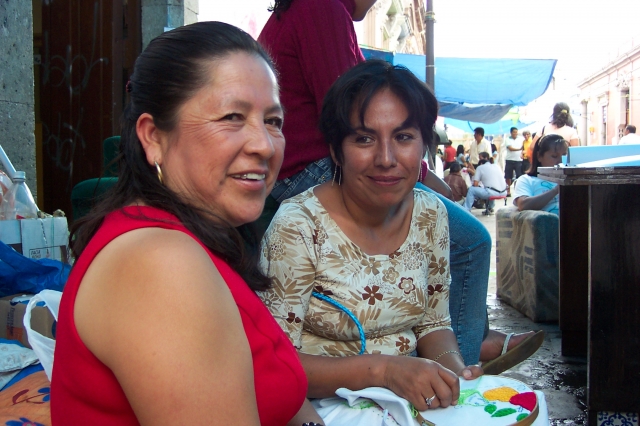 original image (2160x1440)
They greeted the Mexicans,and Oaxaceñ@s in particular, who make their home in Alta California, and were especially happy to hear that people in the states have taken over radio frequencies in the States to set up community radio stations, as APPO has done in Oaxaca in order to better inform listeners. Commercial radio is full of ads and the perspective of the government, they said.
§paredes
by danielsan Thursday Oct 12th, 2006 11:48 AM 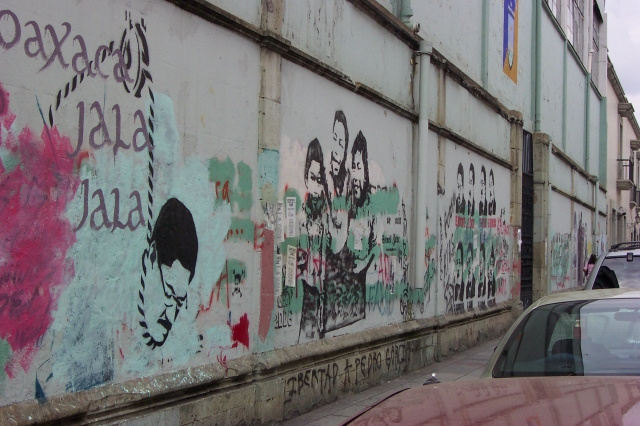 original image (2160x1440)
The walls are covered with APPO graffiti, and on the first day I arrived I saw a crew painting over the walls... as you can see it doesn´t take long before the stencils, slogans, and demands go right back up. The message is clear: (ex) Governor Ulises Ruiz Ortiz (`URO´ is pictured above with a noose around his neck) is no longer in power here in Oaxaca. His rule is over.
§grafiti
by danielsan Thursday Oct 12th, 2006 11:48 AM 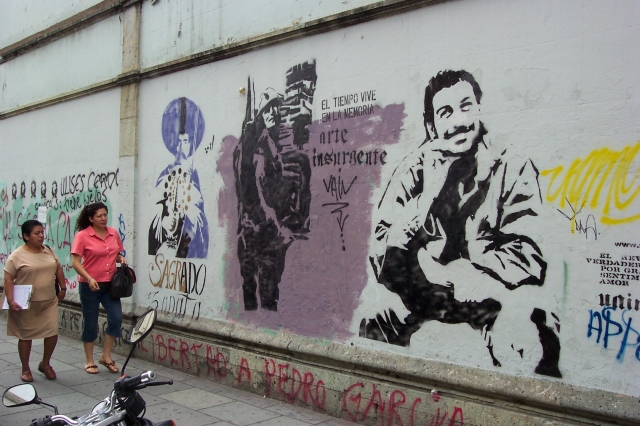 original image (2160x1440)
It´s some pretty incredible artwork, done with skill. More recently a good chunk of the writing has been on the street, so that the next round of invading helicopters will also be able to see the messages.
§pintando
by danielsan Thursday Oct 12th, 2006 11:48 AM 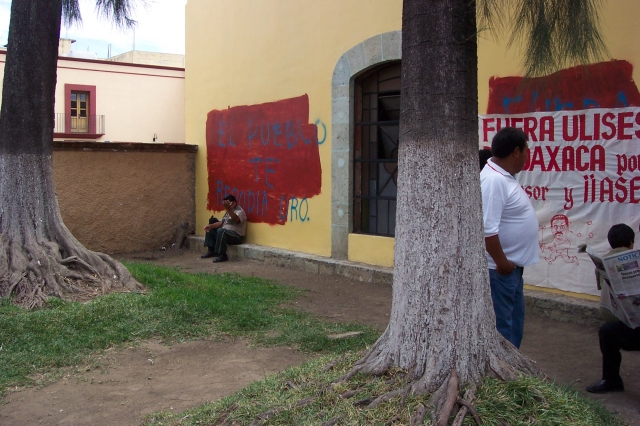 original image (2160x1440)
Yesterday there was a lot of painting going on--on the streets and on the walls, people took advantage of the freshly painted walls to renew and update the message. This private security guard didn´t seem to mind the painting going on while he ate lunch in the park.
§Barricada
by danielsan Thursday Oct 12th, 2006 11:48 AM 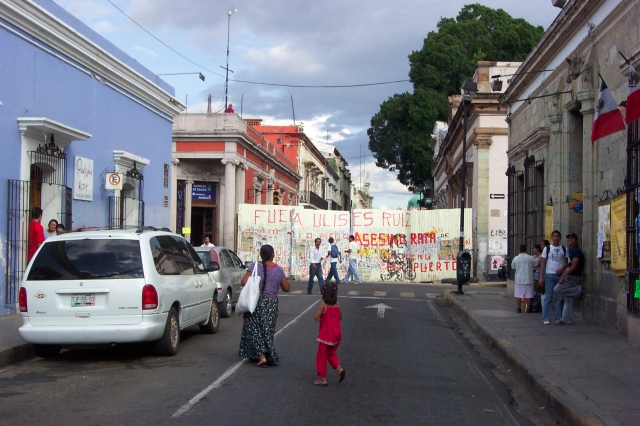 original image (2160x1440)
Barricadas go up, come down, move, and are augmented according to the needs. Before I got here it seemed that inside the barricades businesses were being choked, and people were inconvenienced intolerably. After a couple days in the city, it sure looks like the barricades are a helpful multi-purpose necessity: they attempt to forstall an invasion by federal troops, but they also turn the main center of Oaxaca City into a pedestrian zone, safe for tourists and workers, free of cars, facilitating market stalls and street vendors, all of whom sport signs calling for URO´s resignation (and encarceration).
§preparandose
by danielsan Thursday Oct 12th, 2006 11:48 AM 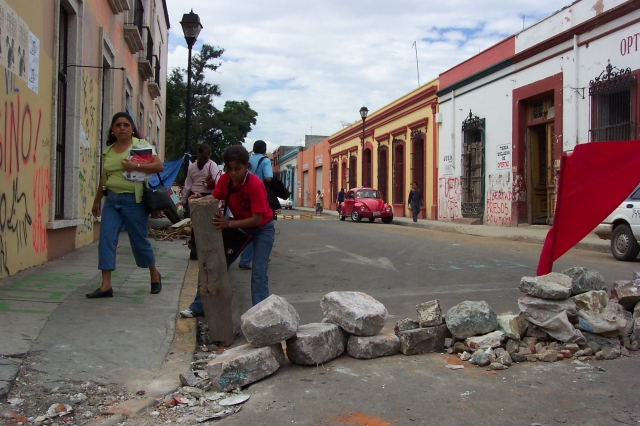 original image (2160x1440)
Additional barricades go up each night, when businesses are closed anyway and provocation and intimidation is more likely to occur. Each night, neighbors and business owners, students and strikers, APPO members and people-in-solidarity come out to set up kitchens, communication equipment, fires, sleeping areas, and barricades of wood, metal, wire, autos, rocks, cement blocks, and whatever else has been collected in order to maintain local control of the city.
Add Your Comments
LATEST COMMENTS ABOUT THIS ARTICLE
Listed below are the latest comments about this post.
These comments are submitted anonymously by website visitors.