by Mike Rhodes (MikeRhodes [at] Comcast.net)
Attacks against the homeless in Fresno continue. The frequency and intensity is increasing. Their homes have been destroyed, the few possessions they own taken from them, and now the city has passed a “Shopping Cart Ordinance” which can result in a $1,000 fine and up to one year in jail. 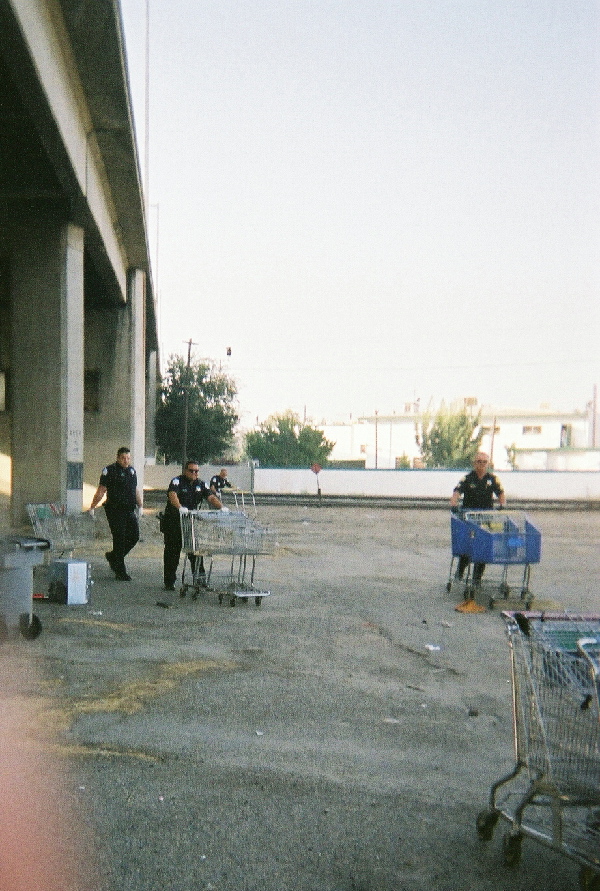 Attacks on the homeless continued this week as the Fresno Police Department conducted raids on numerous encampments on Sunday, October 8. The early morning raid at the H and San Benito street encampment woke many residents up as police arrived to roundup shopping carts. The photos accompanying this article were taken by one of the homeless residents who had a camera. Numerous cameras have been given to the homeless to document attacks like this by the police and other government agencies.

The police also went to a homeless encampment near E and Ventura street on Sunday where they took peoples shopping carts. Some of the shopping carts belong to the residents of the homeless encampment. They were given to them by groups that refurbish old carts and give them to the homeless so they can move their possessions around or pick up bottles and cans to recycle. The police arrived before people woke up and began emptying the contents of the carts and loaded them onto the truck pictured below. One of the women at this sight said that when the police approached her cart she asked them for their name and badge number. When she did that, the officer turned and left without giving his ID. Her cart was not taken! It was the only cart that I saw in the area that had not been taken by the police on Sunday.

On Wednesday, October 11 the police returned to the H and San Benito encampment. They lined all of the men up on one side and the women on the other. The homeless people were searched and their names run through police data bases to look for outstanding warrants or other information that could be used to further detain and/or arrest them. They were not allowed to leave to go to the bathroom and at least one person defecated as he waited to be freed. The police captain told the assembled people that they were trespassing on private property and that he would be back. People that I interviewed said that the captain declared that when he comes back, he will throw all of their property away.

In response to these ongoing attacks, community activists are planning a series of events to support the homeless. Here are the details:

Saturday, October 21
4 PM PRAYER CIRCLE
Join us in a circle of prayer to raise City Hall’s conscience on how their “quality of life” ordinances allows the police power to target and abuse people
5:30 PM RALLY Support the homeless at the new Tent City to be located at the steps of Fresno City Hall.
7 PM TESTIFYING
Listens to people testify why they are homeless, listen to their stories of how the police abused them with the blessings of city hall
8 PM MUSIC, POETRY, AND SPOKEN WORDS
All are invited to participate! FOOD NOT BOMBS FOOD!
9 PM ALL NIGHT VIGIL ON THE STEPS OF CITY HALL
Candles, prayers, and dreams for justice and shelter for the homeless 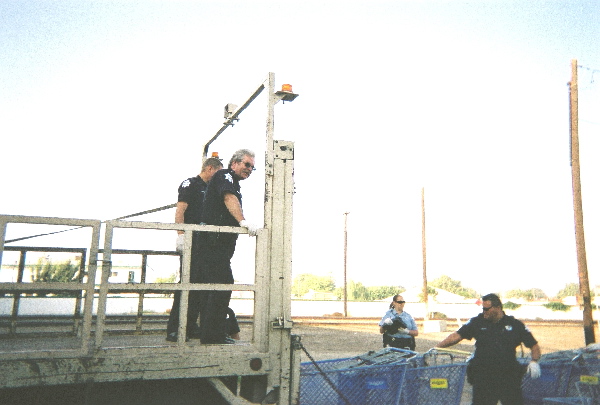 Officers begin to load shopping carts onto the truck at H and San Benito street. All photos are by an unnamed homeless resident who has become a grassroots journalist for justice.
§Cops with Shopping Carts
by Mike Rhodes 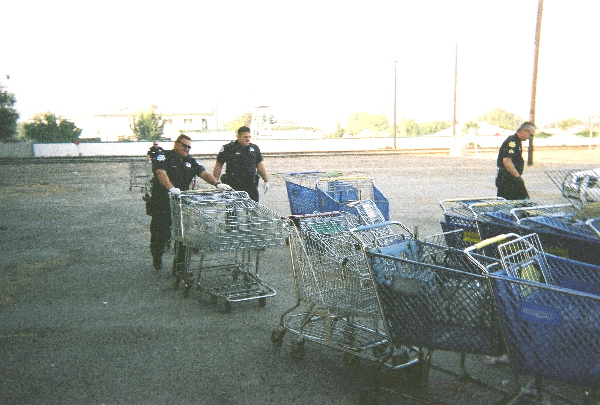 Overpaid grocery store clerks rounding up shopping carts? No, this is Fresno’s finest on a Sunday morning with nothing better to do than harass the homeless. 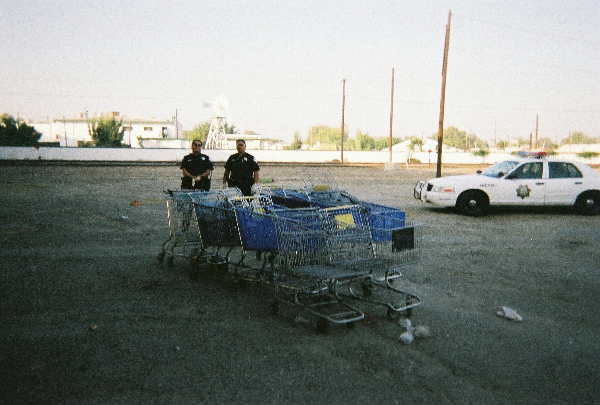 §Leaving the Scene of the Crime
by Mike Rhodes 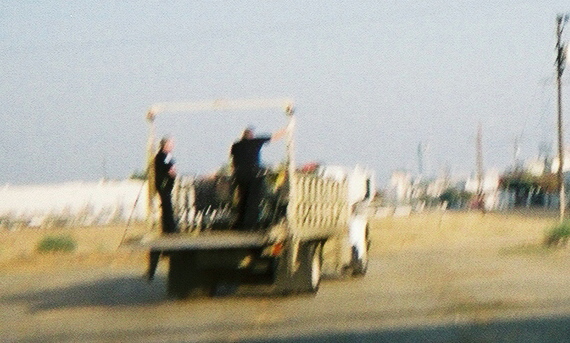 The Fresno Police Department leave the scene of the crime. If a homeless person own a shopping cart and the police steal it, isn’t that a crime? Someone call 911!
Add Your Comments
Comments (Hide Comments)
§NH Constitution
by Peter Macdonald
To NH governor Lynch 10-23-06

Officer Briggs was a Marine. He gave for this country and state. I will be criticized for writing this letter. I write many letters to a elected official whom bragged about bringing ethics back to NH. This elected official is you Governor Lynch. Enough is enough Briggs is a hero but so is most other NH residents. We all do our part to make this a better place. Granted Briggs gave the most but so has many veterans that died on foreign soil. You want to bring more judges to power. What you have to do is eliminate the judges you have that violate the constitution. Judge Peter Fauver knowingly with intent to cause harm violated the NH and Federal Constitutions 29 or more times to bring harm to individuals. Judge James O’Neill ruled Fauver’s Criminal acts to be Constitution to protect a brother bar member. The NH Supreme Court ruled the case Moot to protect the power of the court. The Federal courts ruled judges have immunity to protect the legal monopoly. Judge Robbins of Concord district court found me guilty of being a Terrorist with no trial, raised the bond asked for to an unreasonable amount and sent me to jail. I lost my freedom for 6 months before the bogus charges were dropped. You see I am a 100% disable United States Marine. I was injured threes separate times. Twice during my 31 months over seas tour during the Vietnam Conflict in combat support missions. You the elected government officials and the Blue wall need to realize we the people come first. You need to boost and brag about making life better for the people not people serving as a government employee. Briggs may be a hero but he was doing a job that he was being paid for. Yes he gave his life. I feel sad for him but stop wasting tax dollars on someone whom was getting paid by the tax payers.

We have serious problems in NH and governor lynch you are one. You offered a 30 minute coffee break to high bidder to raise money for the Portsmouth little league. When you found out that I was High bidder you rescinded the deal. This is discrimination, an ethical violation. You ignore the facts. I post these facts on several bogs. Newhampshire.com, myspace.com, nhjustice.net. These are public facts. You can ignore them as the NH newspapers censor them, but the people will learn the truth some day. Worry about serving the people rather than waste money on a dead Marine. What I want is to see that the Madbury NH family that the town selectmen used government power to seek personal revenge on get justice. Give this family back their land and money. Give them back their Constitutional rights.
Does any newspaper have the guts to print this letter front page.
Peter Macdonald Sgt USMC “Semper Fi”
465 Packersfalls rd Lee NH 03824
603-659-6217

END_OF_DOCUMENT_TOKEN_TO_BE_REPLACED
Add a Comment
Support Independent Media
We are 100% volunteer and depend on your participation to sustain our efforts!