Add an Event
Newswire
Calendar
Features
Home
Donate
From the Open-Publishing Calendar
From the Open-Publishing Newswire
Indybay Feature
Publish to Newswire
Add an Event
Related Categories: International | Fault Lines
Shaking Uncontrollably: Vegetables of Mass Destruction and the Looming Bushpocalypse
by Liam O'Donoghue (liambodonoghue [at] yahoo.com)
Monday Oct 9th, 2006 1:25 PM
Is anyone really that shocked that the Congress put a pedophile in charge of the Missing and Exploited Children Caucus? Come on. When they wanted to “learn” about global warming they brought in Exxon’s scientists. When they were trying to figure out if smoking was addictive, they asked the Marlboro Men. Sure, I’m happy that the Republican Party is falling apart faster than discount plastic surgery, but I think we’ve got bigger problems to face, like nuclear weapons and spinach. And apparently lettuce has also joined the axis of e.coli, too. Vegetables of Mass Destruction. Fuck. Is there anything we shouldn’t be scared of? According to this week’s edition of Shaking Uncontrollably, apparently not . . . 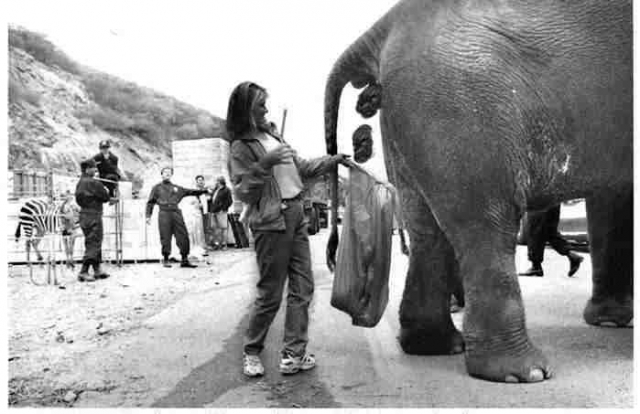 original image (699x453)
Diet Crude with a Twist of Lime: An Italian oil company CEO put oil prices in perspective during an interview with the New York Times last week. Paolo Scaroni said, "Today, a barrel of oil is worth half a barrel of Coca-Cola.” In another interesting comparison between the fossil fuel and the beverage, drinking oil is actually better for your teeth.

Mmm, Smokalicious: A new study published last week by the journal Food and Chemical Toxicology revealed that some cigarette firms are using additives such as plum juice, maple syrup and honey to make their products taste better. Damn, that’s making me hungry. I think I’m going to start putting crushed-up cigarettes in my power shakes.

Big Muscles Smash You Good: According to Yale researchers, too much testosterone can kill brain cells. This “may help explain why steroid abuse can cause behavior changes like aggressiveness and suicidal tendencies.” This may also explain the backyard wrestling phenomenon, the abnormally high illiteracy rate among monster truck drivers, and why so many professional athletes’ autobiographies have been released in the “pop-up book” format lately.

Benevolent Wizard or Unholy Devil-Boy? According to the American Library Association, more people have tried to ban the Harry Potter series than any other book in the US in the pasty year. More than 3000 readers have attempted to ban the books, which are seen as promoting the occult or Satanism. I can only imagine how these concerned parents are going to react if the rumors about Harry starting a Judas Priest cover band in the upcoming final book turn out to be true.

Check out that Statue’s Balls! Sydney McGee, a popular art teacher from Frisco Texas got fired last week from Wilma Fisher Elementary School when the parents of one of her fifth grade students complained that their child saw nude art during a field trip to the Dallas Museum of Art. OK, so it’s alright to execute children in Texas, but God forbid they see some two-dimensional titties… yee-ha!

What are you gonna do about it, Canada? You know that shit is gettin’ nasty when there’s beef between the US Coast Guard and Canada. Yup, heavily armed Coast Guard patrols in the Great Lakes have been freaking out nearby residents and boaters by blasting off thousands of rounds of lead ammunition during “anti-terrorist drills.” Maybe after the Coast Guard is done blowing up the imaginary terrorist navy they can help Don Quixote kill those darn windmills.

Party Time: Last year, Congress designated $20 million for a “Mission Accomplished” party, but since the US didn’t spend the money, they’re rolling the cash over into this year’s military spending bill, just in case “we win.” According to The New York Times, the original legislation empowered the president to designate “a day of celebration” to commemorate the success of the armed forces in Afghanistan and Iraq, and to “issue a proclamation calling on the people of the United States to observe that day with appropriate ceremonies and activities.” Appropriate?! Like what: Oil slick slip n’ slide? Hide and go seek Osama? A gigantic Koran-shaped piñata?

Look Out Dumbo: During a speech in Newport, VA to christen a new $5 billion nuclear-powered aircraft carrier named after his father, President Bush told the story of how Bush Sr. was once suspended from flying during his time as a Navy Pilot. Apparently, Daddy Bush flew too low over a beach so “he could see women sunbathing” and caused an elephant stampede. The flyover upset a circus elephant, "causing him to break lose and make a run throughout the town," Bush said. Hmm. I guess old Georgie wasn’t strategizing so good when he misunderestimated the impact his swoopin’ would have on that there elephantatis.

That’s it for this week. Sorry if this edition seemed a bit scrambled, but after the last few days of having eardrum-shattering Blue Angels flying repeatedly over my head (and setting off all the car alarms on my block), I’m just glad I can still spel.
Add Your Comments
LATEST COMMENTS ABOUT THIS ARTICLE
Listed below are the latest comments about this post.
These comments are submitted anonymously by website visitors.