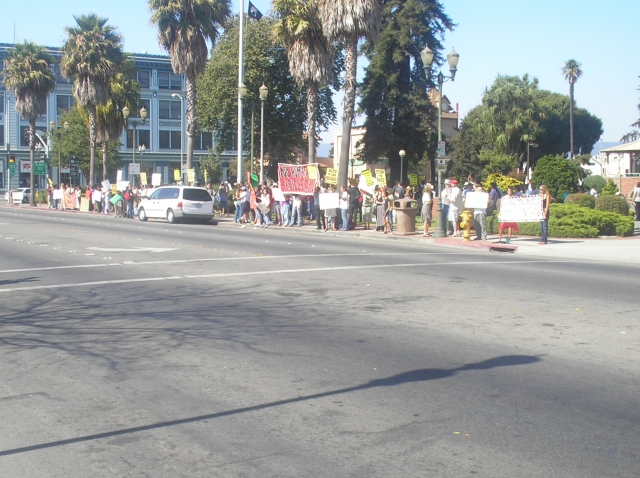 On September 7th and 8th, the communities of Watsonville, Santa Cruz, and Hollister woke up to attacks (arrests & deportations) from the Immigration and Customs Enforcement Agency (ICE, formerly INS). The ICE told local media that they targeted undocumented people with prior warrants, but of the 107 arrested, only 19 had warrants for arrest, and up to 90 were immediately deported without an opportunity to see an immigration judge or receive any kind of legal advice. It was reported that the ICE told the victims that they were either police or school officials. Once in the house, they questioned all people living there about their immigration status. Children were left without their parents, husbands without their wives, and wives without their husbands. All college students, business owners, and church members are especially encouraged to participate!
§photo2
by tzunum Sunday Sep 24th, 2006 8:18 PM 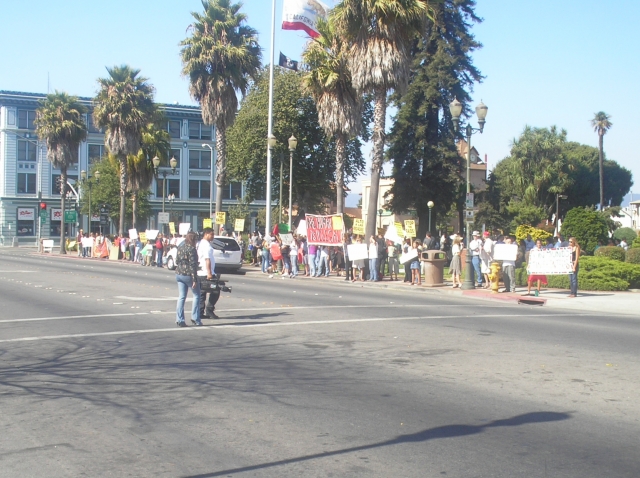 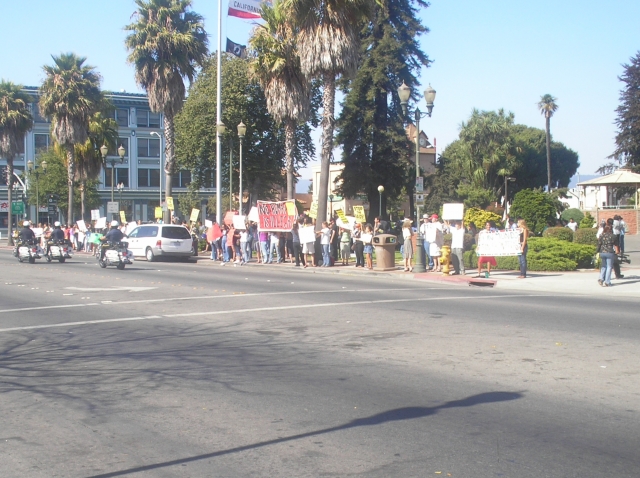 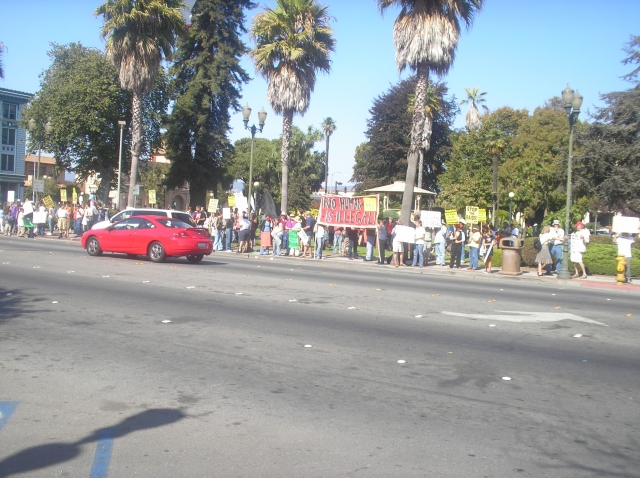 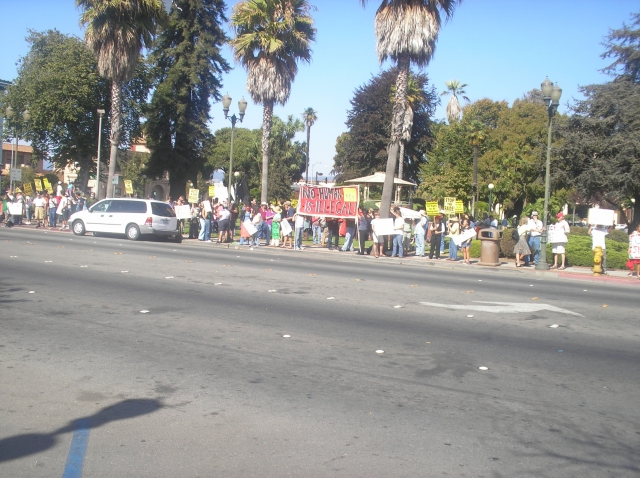 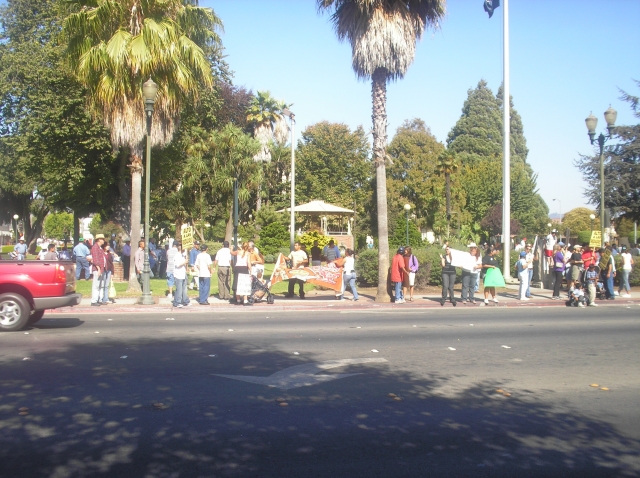 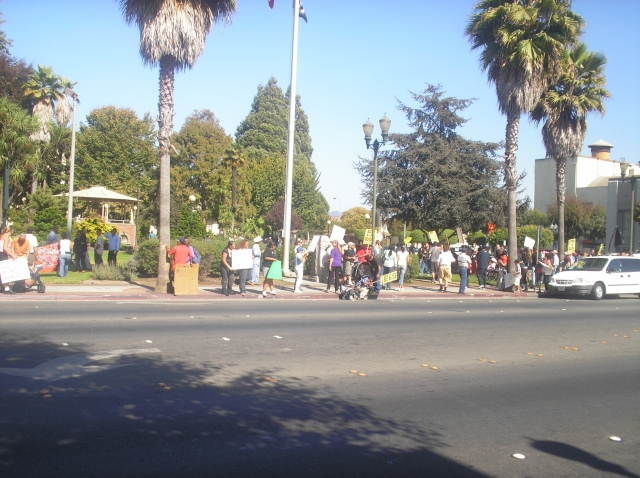 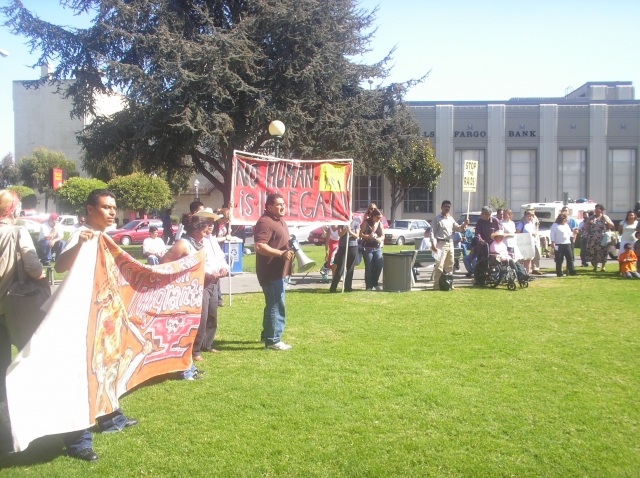 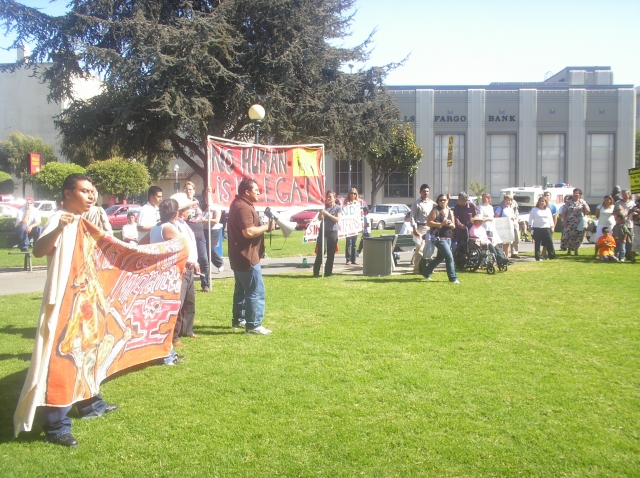 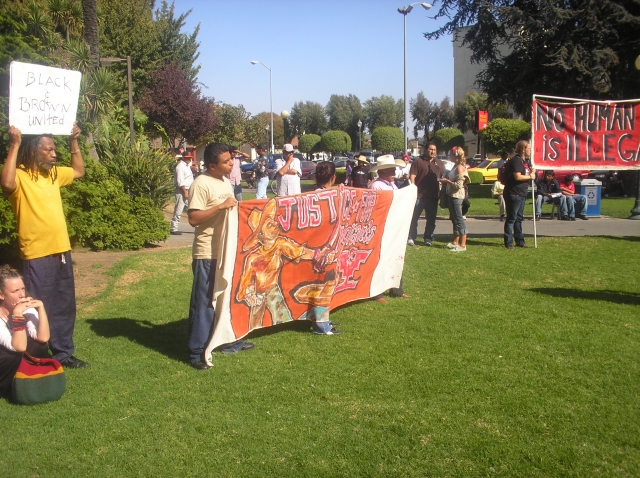 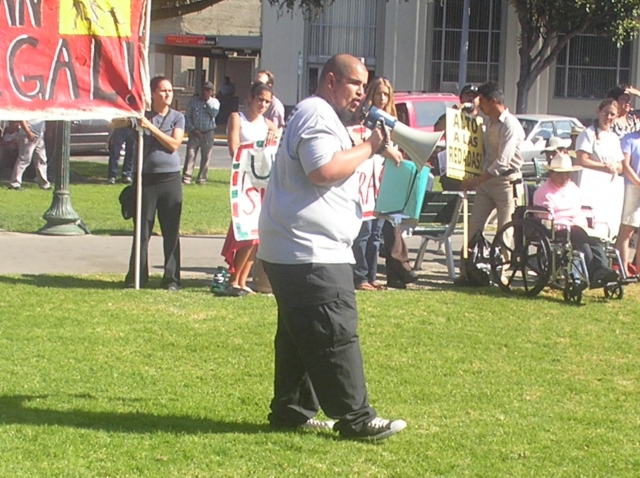 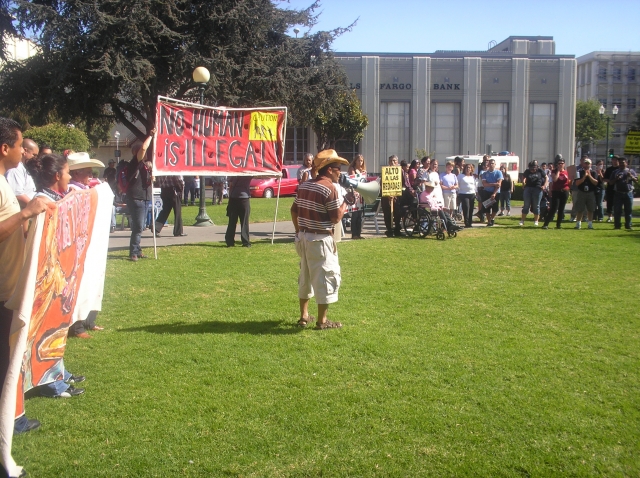 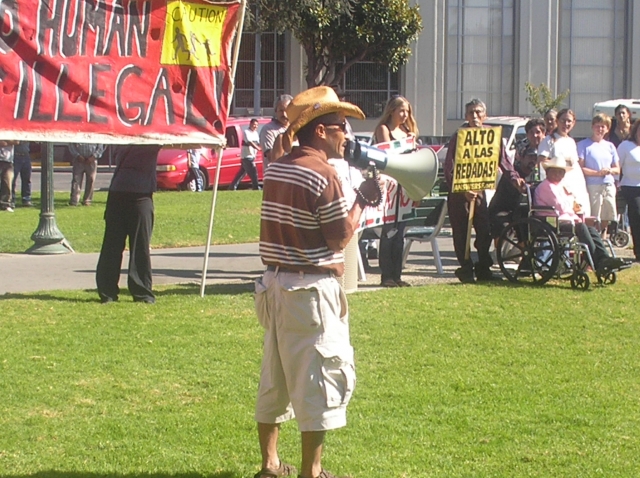 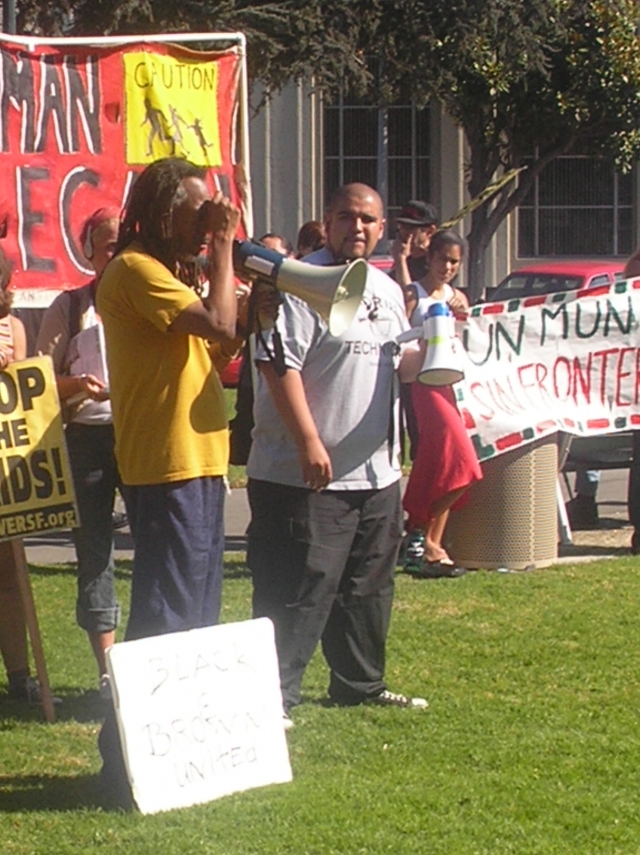 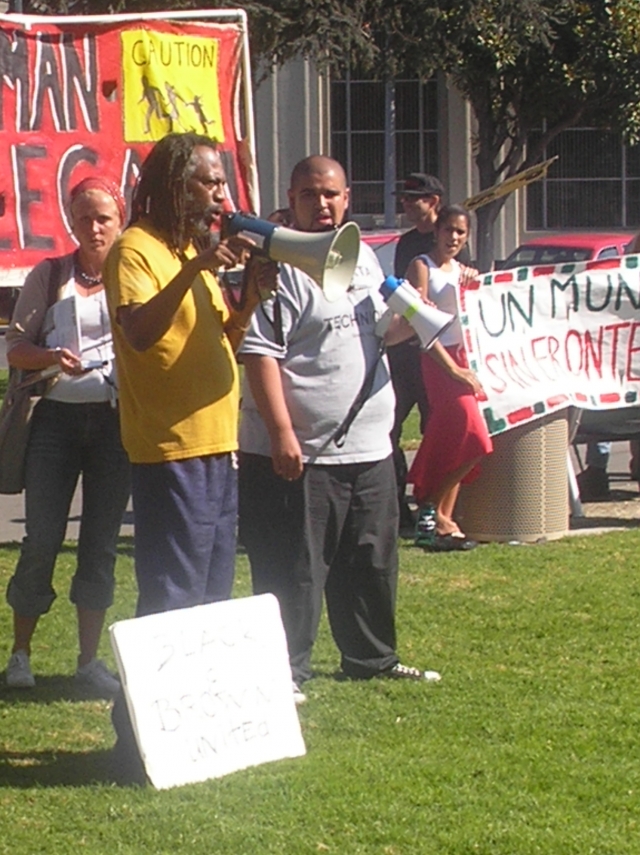 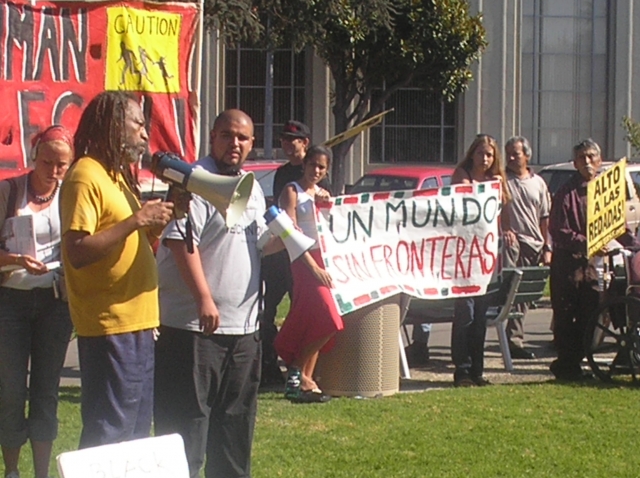 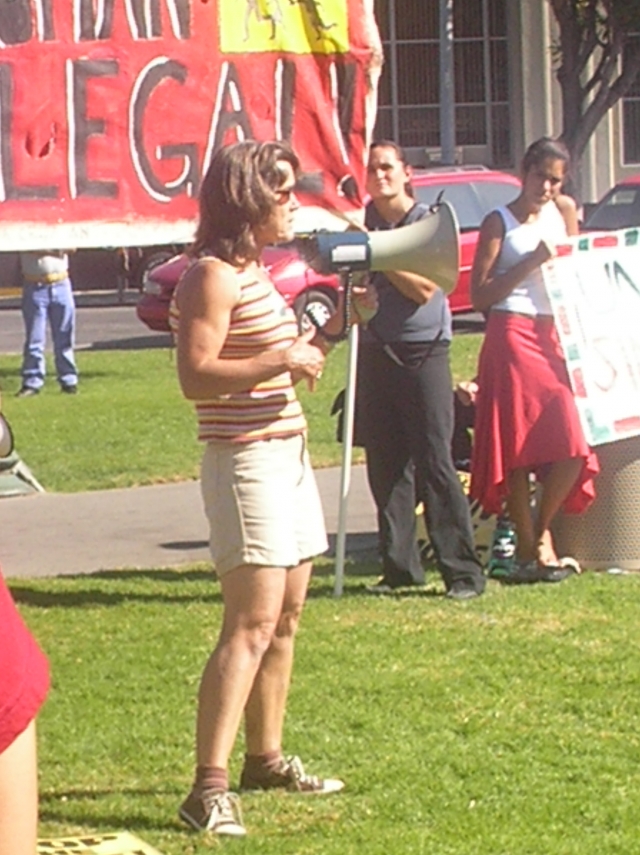 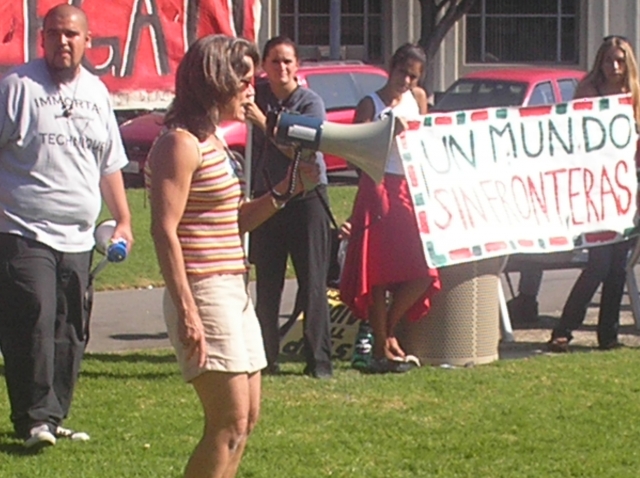 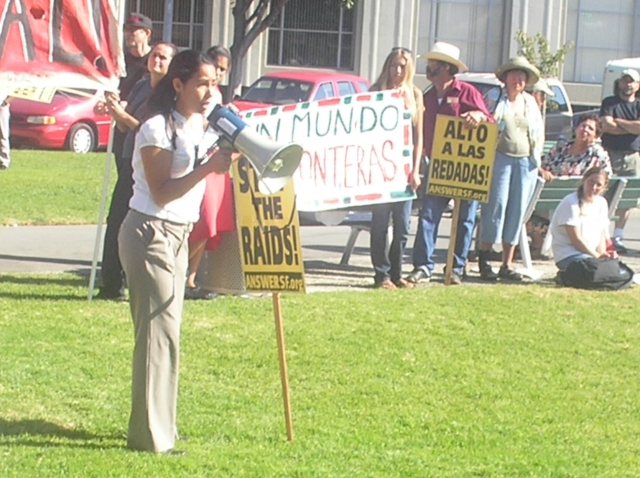 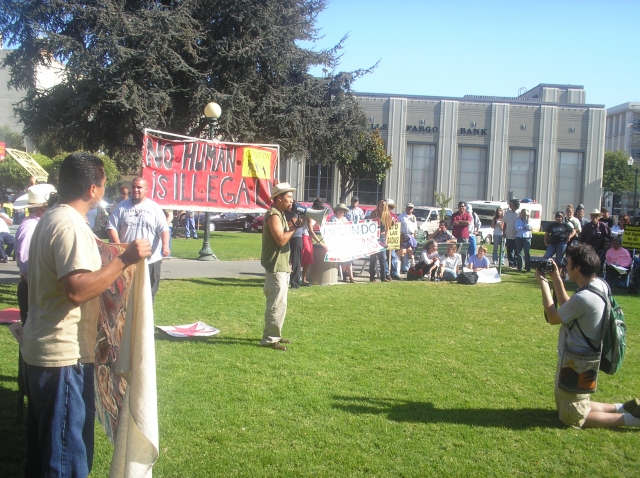 §Brown Pride
by Isaias Negrete
Monday Sep 25th, 2006 9:38 AM
im from watsonville and i just wanted to wish the protest the best of luck

Add a Comment
§viva la raza
by emiliano
Monday Sep 25th, 2006 9:43 AM
I think brown and black need to unite and form a new movement against the imegrant raids to protest against the raids until its over power to the people.
Add a Comment
§Oh geeze...
by ange
Monday Sep 25th, 2006 9:44 AM
I feel that maybe they are trying to make people that are "illegal" feel as though they do not have any power in the U.S. It's extremely unhumane. I really dont think that ANYONE should have the right to seclude people because of ALL THINGS race. People are always trying to find ways to hate people. Trying to find reasons and excuses to disempower others. The government is so caught up in trying to make "their" country seem united, and "free", and all that. The more laws they're creating the more the U.S. becomes less and less of a democratic country. The more their "pledge of allegiance becomes falsified . "Liberty and Justice for all"?

hah...
Add a Comment
§Being and Immigrant isn't a bad thing!
by Angelle
Monday Sep 25th, 2006 9:45 AM
I feel that the people at the protest did the right thing by being there. It was interesting to read that people from other towns come down to Watsonville to support the Immigration Raid Protest. This showed how united people can be when a major issue is involved. I also think that their should be another protest that will help support all Immigrants. I think that the word should be spread and people should know that being an immigrant isn't a bad thing. People don't understand that being an immigrant isn't bad. people come to this country to better themselves. Parent's want to give their children a better life. The chance to obtain an actual career and to succed.
Add a Comment
§LA RAZA
by El morro
Monday Sep 25th, 2006 9:46 AM
FUCK LA MIGRA,FUCK THE LAW
Add a Comment
§they have the righ to be in U.S.A
by j.b.a
Monday Sep 25th, 2006 9:48 AM
there are immigrats who came to U.S.A for a better life and traying to give their kids the righ to educate them self and it's not fear that they trade them like ciminals while people know that they are here traying to work and make their life in U.S.A they just came because the life in mexico it's not that eassy what i know it's that if someone is looking for a job the poeple have to had at least high school but the poor people can't pay their education you can see kids working at the street in mexico because their parents don't have enough money to pay their aducation
Add a Comment
§LA RAZA UNIDA JAMAS SERA VENSIDA
by FRUTOS/ DEL OJO DE AGUA
Monday Sep 25th, 2006 9:48 AM
QUE ONDA RAZA .UN SALUDO PATODOS MIS PAISAS TEJANEROS DESDE EL OJO DE AGUA MICHUACAN.LOCALISADO EN WATSONVILLE CALIFAS.TAMBIEN PATODOS LOS QUE SE ESCONDE DELA BUMBA PERRA MIGRA
Add a Comment
§CANT STOP WONT STOP WATSON'S RAZA,QUE VIVA LA CAUSA
by JALISCO,GUALARAJARA
Monday Sep 25th, 2006 10:37 AM
GOT 2 GIVE THANKS 2 EVERY BODY 4 SUPPORTING OUR RAZA,QUE CHINGE SU MADRE LA MIGRA.
.4RM EL MEXICAN SUPPORTER....
Add a Comment
§Border Summit of the Americas - Let's Push the Border Up North Inch by Inch!
by tzunum
Monday Sep 25th, 2006 10:39 AM
Tohono O’odham communities have gathered together in southern Arizona along with Derechos Humanos Coalition, American Indian Movement, International Indian Treaty Council and others to call for an urgent Border Summit of the Americas.

The summit will be held at the San Xavier District Cultural Center, Tucson, Arizona from September 29 through October 1, 2006. Campsite space and other nearby accommodations will be available. More detailed information will follow at later date. Mark your calendars now! Organizations are requested to send in a statement and or send a representative to the event.

The three day Border Summit will be facilitated with assistance from M.C., Dennis Banks, and Bill Means. Speakers on these and other concerns are yet to be confirmed. A Film “Crossing Arizona” will be viewed on Saturday. Directed by Joseph Mathew and Dan De Vivo, is an up-to-the-moment look at the hotly debated issues of illegal immigration and border security on the US/Mexico border. Floyd Red Crow Westerman—artist, actor, and songwriter—will be on hand for an evening concert in solidarity with Nations along la Frontera!

Make your voices be heard!! Immigration policy proposals and homeland security have combined to create a volatile situation along U.S. international borders. Increased law enforcement and vigilantism along the U.S.-Mexico border, in particular, has sparked a wave of reactions across the United States, from massive demonstrations to calls for voter registration campaigns and targeted actions.

In addition, in the northern border, the Bush administration has initiated efforts to nullify the Jay Treaty, which recognizes the right of border passage to Indigenous Peoples. And, have also planned to introduce new legislation for new laws to require DNA tests to determine Indian blood. All of this is being done without consultation or informed consent by First Nations peoples, and in violation of their treaty rights.

Coupled with the failure of both political parties in the U.S. to address the critical issues specifically confronting Indigenous communities today along its border, and by abandoning any meaningful legislation in this pre-election period, is cause for major concern. There is increasing urgency for Indian communities along the border(s) to address U.S. border enforcement policy. Recent legislative proposals affecting immigration, increased militarization of the border and the rise of private militias along the border(s) have created volatile and dangerous environments for American Indian border communities. Each day the likelihood of conflict and violence is increasing.

Many deaths and injuries have occurred, and many of these deaths are of Indian people from Mexico, Central and South America. This Border Summit of affected communities will provide an important opportunity to document current community experiences with border enforcement activities, identify and discuss issues and explore potential responses. An opportunity to invite the participation of Indigenous peoples from Central and South America, many times victims of U.S. immigration prison camps, threats and intimidation is extended to share their perspectives and recommendations for broad networking to help achieve a common goal.

The Border Summit of the Americas will also explore its future participation in the international arena with the newly created discussions at the UN to establish a Permanent Forum on Migration and Development, as a result of the impact of globalization on society. The Permanent Forum will also serve to gauge the progress of the Millennium Development Goals set by the United Nations in 2000.

Let’s not let the southern desert of the southwestern U.S. become another military strategic post for maneuvers similar to what is being witnessed in Iraq and Afghanistan. For the 25 tribes along the northern and southern U.S. borders, these changes in border security practices have had a dramatic effect.

Currently more than half of the apprehensions are made in Arizona, where just a fraction of the migrants used to cross. At present at least eight tribes/nations on the U.S./Mexico border between California and Texas are directly affected by migrations across their reservation lands; the Kumeyaay, Cocopah, Tohono O”odham, Yaqui, Gila River, Pima, Yavapai, Ysleta del Sur (Tigua) and Kickapoo nations.

Issues to be discussed include: environmental threats, human rights violations, cultural rights, treaty rights, and sovereignty for Indigenous peoples and Nations, in particular those divided by international borders between Canada and the United States and Mexico and the United States.

The outcome of the Border Summit will be the development of recommendations for border tribal governments and other affected parties to communicate with local, state and national as well as international bodies. This effort lays the groundwork for non-violence on Indian land and a more secure border.

Add a Comment
§IT'S NOT FAIR
by CRISPY!!!!!
Monday Sep 25th, 2006 10:40 AM
IT'S NOT FAIR THAT IMMIGRANTS ARE BEING SENT BACK TO THE OLD LIFE THAT THEY HAD....THEY CAME HERE FOR A RERASON, NOT T0 BRING HARM TO THOSE WHO ALREADY LIVE HERE.THEY JUST WANT WHAT OTHERS ALREADY HAVE, A BETTER LIFE. WHY DO THEY GET PUNISHED....IF WE CARE ABOUT OUR FAMILIES IF WE CARE ABOUT OUR COUNTRY SHOULDN'T WE CONSIDER LETTING THESE "ALLIENS" BECOME APART OF OUR HOME???? THE MAJORITY OF WATSONVILLE IS LATINOS WHY CANT WE ALL JUST COME TOGETHER TO FIGHT THIS????? IT'S NOT FAIR AFTER THEY WORKED SO HARD TO GET HERE AFTER RISKING THEIR LIVES WE ARE JUST GOING TO HAVE NO MERCY AND SEND THEM BACK....I BELIEVE IT'S NOT FIAR......I'M A YOUNG HISPANIC AND HATE TO SEE THIS HAPPENING TO OUR HOMES.
Add a Comment
§Return to Sender
by Emortl.....T.O.S FOR LIFE
Monday Sep 25th, 2006 10:44 AM
As long as people have hope and courage to live a better life in America they will never stop crossing the boarder.this deportion is not the awsner
Add a Comment
§Independant Point of View
by James A. Rodriguez
(freestylejutsu [at] yahoo.com) Monday Sep 25th, 2006 10:44 AM
I am not directly effected by these events, yet I still have my oppion. I Learned that I.C.E. told people they were the police or the F.B.I, even school officals in regaurds to their children. I dont konw whats worse, to enter this country as an illegal or violating some ones constitutional rights by impersonating a federal officer and going into peoples homes. people complain about the immigration problem, next when they are go you will complain about your food cost to much now becasue the illegal works are gone, now they have to pay people the real wage for the hard work they do to put food on your table, in that case your produce will cost more. they built this country tey run this country and they belong in this country. get over it

Add a Comment
§five hundred?
by friend
Monday Sep 25th, 2006 6:20 PM
hi everyone. I wish I could have made it to the protest to support immigrant rights, but I'm glad folks posted pictures so those of us that couldn't make it could see! This post says that 500 people showed up, though I don't see anything close to that number. Were there really 500 people there? If so, why aren't they in the pics?

but, if you count all the people in the cars that were honking, we easily had 500 people protesting!

¡ya basta!
Add a Comment
§actually...around 500
by windhorse
Tuesday Sep 26th, 2006 10:57 AM
With more sensitivity to the culture of migrant people, the “undocumented,” their fears and struggles, you’ll understand that great many of them “were also with us,” hanging around the park, stepping in an out of “the circle….” Think outside the box! Peace and justice in the struggle! -windhorse
Add a Comment
§500? 200? Maybe 60
by Jaime
Thursday Sep 28th, 2006 12:48 PM
Looking at the big versions of those photos I can only count 59 people.
Add a Comment
Support Independent Media
We are 100% volunteer and depend on your participation to sustain our efforts!