Add an Event
Newswire
Calendar
Features
Home
Donate
From the Open-Publishing Calendar
From the Open-Publishing Newswire
Indybay Feature
Related Categories: California | Animal Liberation
California Supermarket Posts Foster Farms Cruelty Notice
by East Bay Animal Advocates
Wednesday Sep 20th, 2006 5:35 PM
Foster Farms spends approximately $11 million on company marketing annually, TNS Media Intelligence reports. Over the last decade, courtesy of Foster Farms, Californians have come to know two madcap chicken characters, known ironically as the “Foster Imposters”. While the California poultry producer wastes money on frivolous advertising, animal welfare is unswervingly compromised. After a two-year hiatus, the “Foster Imposters” campaign is returning to television at the end of September.
The timing is impeccable—not only because it is National Chicken Month, but also, because one supermarket is now willing to give its customers a more balanced view of the harsh realities of life at Foster Farms.

Selling Foster Farms products, Berkeley Bowl Marketplace is the largest grocery store in Berkeley, California. After learning about the practices of the poultry company, the president of Berkeley Bowl, Glenn Yasuda, was ready to make a bold and creative move to educate consumers.

Berkeley Bowl has agreed to the postings to allow both East Bay Animal Advocates and Foster Farms the opportunity to express their positions and have Berkeley Bowl customers decide for themselves.

In addition, EBAA has launched an online advertising campaign with http://www.Google.com to educate consumers in California, Oregon and Washington about animal abuse at Foster Farms. 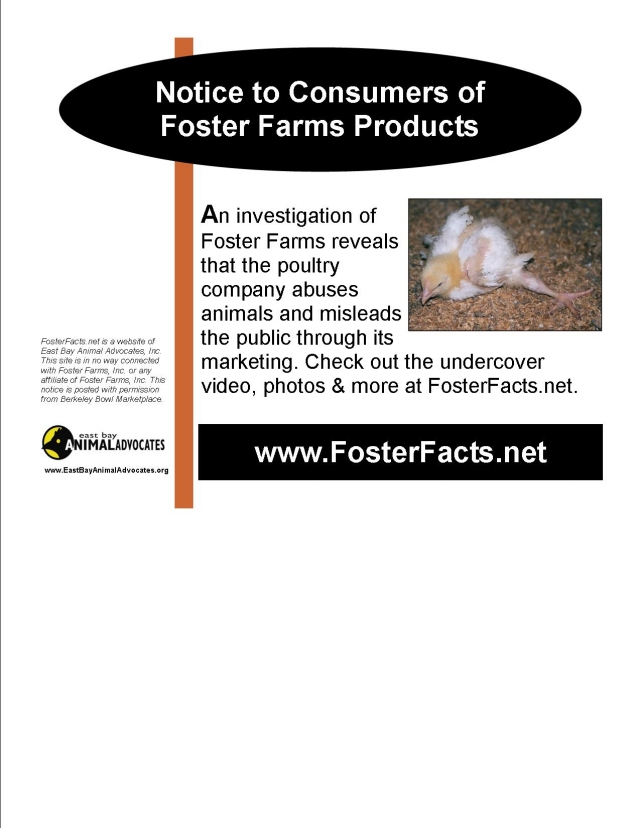 Just as Bush's promotion of Eli Lilly pharma products for nationwide depression screening, the solutions prescribed by the corporatist regime usually falls short of success by a long shot..

The source of avian flu in poultry is most likely factory farming methods, where close quartered poultry can rapidly transmit antibiotic/antiviral resistant microbes to one another. The close living quarters in factory farm encourage the rapid evolution of fecal/feather habitat living pathogens and their fast transmission throughout the battery cages. This accelerated evolution amonst the microbe pathogens enables them to develop resistance to the myriad of antibitoc/antiviral pharma products that the poultry are forced to consume..

"As University of Ottawa virologist Earl Brown put it after a Canadian outbreak of avian influenza, ``high-intensity chicken rearing is a perfect environment for generating virulent avian flu viruses''.

Other experts agree. In October, a United Nations task force identified as one of the root causes of the bird flu epidemic, farming methods ``which crowd huge numbers of animals into small spaces''.

Supporters of factory farming often point out that bird flu can be spread by free-range flocks, or by wild ducks and other migrating birds, who may join the free-range birds to feed with them or drop their feces while flying overhead. But, as Mr Brown has pointed out, viruses found in wild birds are generally not very dangerous.

On the contrary, it is only when these viruses enter a high-density poultry operation that they mutate into something far more virulent. By contrast, birds that are reared by traditional methods are likely to have greater resistance to disease than the stressed, genetically similar birds kept in intensive confinement systems. Moreover, factory farms are not biologically secure. They are frequently infested with mice, rats, and other animals that can bring in diseases."

Peter Singer is reputed as a radical animal rights activist who believes that humans should avoid eating any meat whatsoever for ethical reasons, "eating animals is wrong, thus no meat". This stance causes many to dismiss any of Singer's critique of factory farming methods as based on this initial "no meat" premise. However, many farmers who endorse eating free range poultry also agree on the ravages of viral and bacteria transmissions occurs in factory farmed poultry regulary overdosed with antivirals like amantadine..

"In fact, the widespread use of the antiviral drug amantadine to control viral outbreaks in animals on Chinese farms has made bird flu drug-resistant, rendering the drug useless to protect humans.6 And the problem is not restricted to birds: Factory-farmed cows and pigs, who also live in crowded and unsanitary conditions, can get and spread influenza and similar viruses.7 Hans-Gerhard Wagner, a senior officer with the U.N.’s Food and Agriculture Organization, has called the “intensive industrial farming of livestock” an “opportunity for emerging disease.” In other words, giant factory farms are veritable flu-making facilities.8 Learn more about how factory farming causes diseases to become drug-resistant."

The permaculture farmers are not happy being blamed by the authorities as the cause of avian flu outbreak when international research indicates that factory farms are the source of avian flu..

"However in a factory farm situation, perfect conditions
exist for a virus to mutate from a low pathogenic to a high
pathogenic form. Thousands of hosts (chickens) with near
identical genetic makeup, all the same age and size,
crowded in close conditions, allow a virus to kill its host,
and move onto the next victim with great speed and ease.
The HPAI virus depends on the factory farm system to
continue supplying it with new hosts through the vertically
integrated industrial poultry operations, linked to each
other via the global trade in live birds, eggs and virus contaminated
feed and manure."

Neither Tamiflu nor any other pharma product will protect humans and avians from the ravages of microbial pathogens, only a return to permaculture farming methods performed as if Madre Tierra mattered. Ironically, it is the small-scale outdoor permaculture poultry farms that are being blamed for avian flu, despite the culprit being factory farmed poultry..

"BARCELONA, Spain, February 27, 2006 (ENS) - Small-scale poultry farming and wild birds are being unfairly blamed for the bird flu crisis now affecting large parts of the world, according to a new report from an international nongovernmental organization based in Barcelona. The report says initiatives are multiplying to ban outdoor poultry, squeeze out small producers and restock farms with genetically modified chickens.

Instead, the transnational poultry industry is the root of the bird flu problem, says the report issued today by the organization GRAIN, which promotes the sustainable management and use of agricultural biodiversity based on people's control over genetic resources and local knowledge.

"Everyone is focused on migratory birds and backyard chickens as the problem," says Devlin Kuyek of GRAIN. "But they are not effective vectors of highly pathogenic bird flu. The virus kills them, but is unlikely to be spread by them."

Kuyek says the spread of industrial poultry production and trade networks have created ideal conditions for the emergence and transmission of the highly pathogenic H5N1 strain of bird flu."

"Myth one: Industrial agriculture will feed the world

The truth:
World hunger is not created by lack of food but by poverty and landlessness, which deny people access to food. Industrial agriculture actually increases hunger by raising the cost of farming, by forcing tens of millions of farmers off the land, and by growing primarily high-profit export and luxury crops." 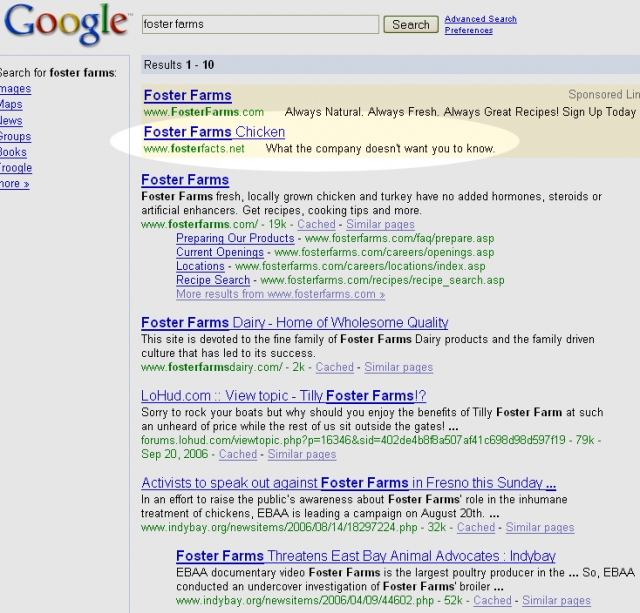 original image (734x704)
EBAA has launched an online advertising campaign with http://www.Google.com to educate consumers in California, Oregon and Washington about animal abuse at Foster Farms. Here's one example:
Add a Comment
Support Independent Media
We are 100% volunteer and depend on your participation to sustain our efforts!