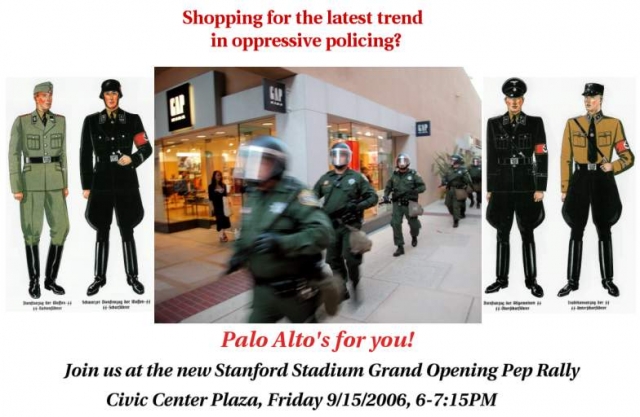 original image (784x512)
Palo Alto has a proud history of loyal support for its Heroes in Blue.

As you can now see, maintaining a state-of-the art paramilitary that regularly tramples civil rights and criminal law requires deep funding. It drains 20% of the General Fund expense, the #1 expense (and that's not including the legal expense and settlement payouts of civil suits). Just continuing to pay the salaries (not including benefits) of convicted brawlers Kan and Lee costs are least $70,000 per year each. That's why Palo Alto is now providing YOU the opportunity to subsidize your oppression by Shopping Palo Alto! City Manager Frank Benest, boss of chief Johnson, has promoted a plan whereby shoppers can get the city out of the mess he made. Since the city's share of sales tax is 1%, YOU can pay Kan and Lee's annual salaries simply by spending at least $14 million in Palo Alto each year.