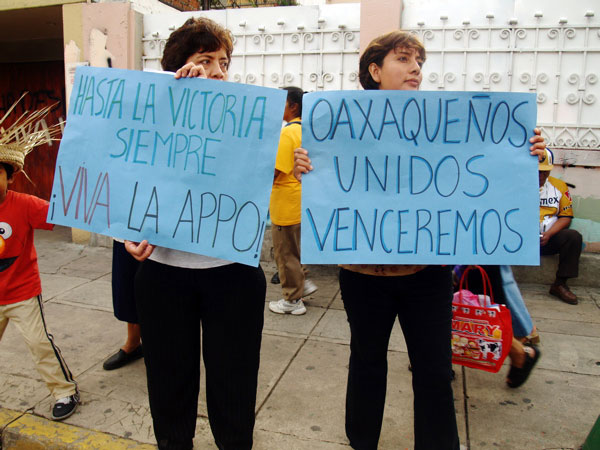 Oaxaca is in the midst of a social crisis with mounting human rights violations. A popular movement formed in order to combat the repressive state government led by Governor Ulises Ruiz Ortiz (URO). Paramilitary groups and undercover police have targeted these unarmed protesters with violence and even lethal force.

In 2004, URO came to power through an election viewed by many as illegitimate and corrupt. But, after years of organizing, social movements are poised to take him out. Over the course of four months, a teachers’ strike has morphed into an all-out popular revolt.

Protesters had reclaimed a state-owned television station and numerous state and corporate radio stations. All seats of government have been blockaded, forcing legislators to meet in secret and remote hotels outside Oaxaca City. A parallel and popular governance has formed and is gaining legitimacy as the true authority in the state. Ruiz Ortiz’s exit is whispered through the streets, painted on city walls, and demanded by daily direct actions.

Bradley, a contributor to Santa Cruz Indymedia, recently spent a week taking photographs in Oaxaca City. He will discuss the peoples' movement in Oaxaca and present an audio/visual SlideShow. This will be followed by a discussion on Oaxaca solidarity and what we can do to support the Oaxacan people in their quest for social justice.
Add Your Comments
LATEST COMMENTS ABOUT THIS ARTICLE
Listed below are the latest comments about this post.
These comments are submitted anonymously by website visitors.