beware of 911 disinfo: here is a guide for protection:
http://www.oilempire.us/bogus.html 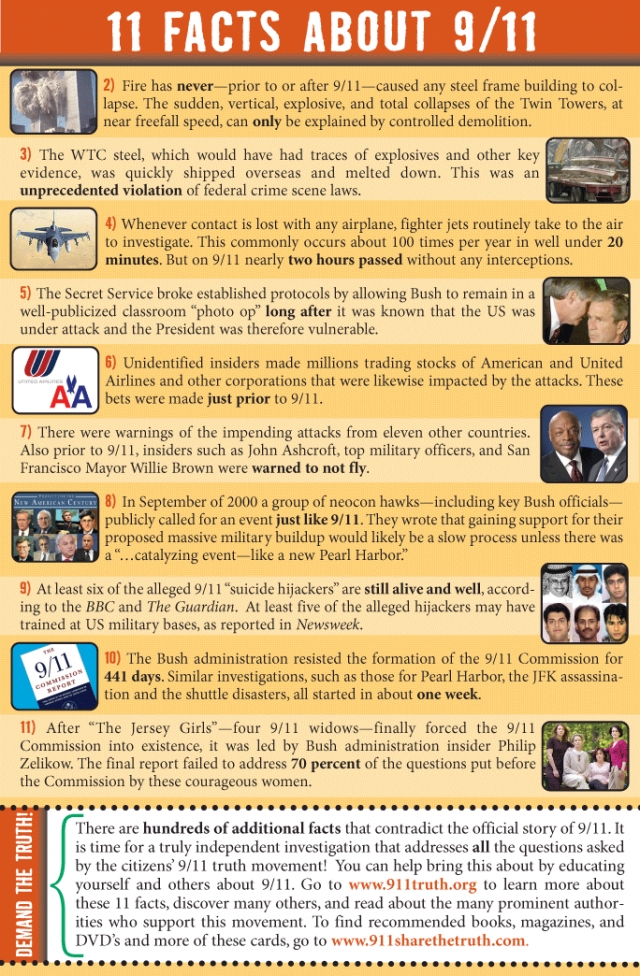 original image (684x1044)
How 50 Men May Have Engineered 911
Douglas Hermans
9-12-6
I've read a lot of commentary about the number of plotters it would have required to carry out an "Inside Job," black operation on September 11, 2001. One lively critic of the Truth Movement, Jan Burton, emailed me that 10,000 men would be needed. And all of them would have to keep their mouths shut forever.


Four or five head plotters at the top might hatch a plan. Call our plan PNAC. Plan of a New Attack Conspiracy. This handful of top government officials would hold the true reins of power in the White House and the Pentagon. I could name three or four players right now, just as anyone could, but I'll leave their identities to the imagination of my readers.


These powerful men, connected to banking, oil and the defense industry, would have a plan in place months in advance. They would then be joined by a half dozen foreign political operatives from a small, tech-savvy country. This small tech-savvy country would, ironically, have top officials in place already in the Pentagon. They would possess dual citizenship but be most loyal to one country. The small one.

The secretive, top operatives of the two countries would be joined by a few top honchos in the intelligence field. They would serve as a delaying force, delaying the warnings of loyal and patriotic Americans in the FBI, NSA and the FBI. Any whistleblowers that arose---

would be marginalized later by a complicit mainstream media. This media would consist mostly of dupes and true believers. They would be outside the loop and not required to have insider information.

These remarkable and clever men command huge numbers of SPECIAL FORCES. These special commandos resemble the Navy Seals. They possess certain demolition skills and variety of disguises and genuine-looking yet fake identification. I suspect these key players pledged a loyalty to a certain tech-savvy country and have been highly trained to follow orders. Trained professional killers who ask no question. Ever. Additionally, with their identifications, they are allowed ready access to key security points easily.


Perhaps a dozen men altogether--maybe as few as a half dozen-probably gained access to the WTC buildings 1,2, and 7 in the months prior to that "attack."


How many conspirators do we number thus far? 30 or 35 maybe? Far cry from the "tens of thousands" the Bushco apologists suggest.

or simpler yet: send a blank email to:
catapultthepropaganda-subscribe [at] yahoogroups.com

or simpler yet: send a blank email to:
openmindopencodenews-subscribe [at] yahoogroups.com

Next, one would need the ability to control planes by remote control. Curiously, the head of a small, tech-savvy company that possessed that very technical electronic skill also enjoyed ready access to the Pentagon. He worked there in a high position as Comptroller, controlling the flow of money

(during a time when 2.6 trillion went unaccounted for). According to Wikipedia: "In 2001, Dov Zakheim was CEO of SPC International, a subsidiary of System Planning Corporation, a defense contractor specializing in electronic warfare technologies including remote-controlled aircraft systems.

Now you would need two or three more top people, preferably very rich, connected to the New York real estate market to acquire control of a suitable target. Let us call this target the WTC complex, a suitable array of architectural white elephants and one very highly important US government building (WTC-7) that could be insured for far more money than they cost.


Now we number 38 insiders at the most. Almost all of our ducks are in place. The shooting gallery is just about to open.

For the sake of simplicity, we'll require some skilled commandos to remain close to the targets. To remotely control the hijacked planes into the towers and Pentagon. How many skilled technicians would this require? Five thousand, you say? How about a dozen?


Well, now we've reached the 50. Anyone else is a peripheral player. Any top US general, befuddled at the Pentagon or NORAD is simply a victim, as much as those bewildered FAA air traffic controllers or USAF pilots. By the way, whatever happened to those air traffic control tapes? Guess we can add that fellow to our list of plotters, the top official who ordered the tapes destroyed after the New York Massacre.

That takes us to 51. Call it Area 51. A place that doesn't exist. Except in the twilight zone of our imagination. Except in the minds of "conspiracy nuts" like myself.


Lastly, critics of an inside job, like my correspondent Jan Burton, claim that somebody, anybody, would have come forward by now and "blown" the plot wide open. Now why would they do that? Indeed, well-trained commandos from another country might feel compelled to drunkenly boast about their exploits but I seriously doubt any commando would suffer any pangs of conscience.

And suppose some top official already came forward? Sybil Edmonds already came forward about 911 and her revelations have amounted to exactly nothing. Any top US official would have to think twice before risking his neck to suffer ridicule and probable recriminations---

and threats of harm to himself and his family. I'm reminded of those US Navy sailors who were threatened with simple military courts martials and demotions if they talked about the attack on the USS Liberty. Now multiply the threat by, say, death. How many would talk then?

USAF veteran, amateur historian and controversial novelist of The Guns of Dallas,
Douglas Herman explained the likely scenario of the JFK assassination in his recent suspense thriller. He writes for that last bastion of free speech--the internet. Support it or lose it. Contact him at douglasherman7 @ yahoo.com
Add Your Comments
§Mister Truth
by Same
Wednesday Sep 13th, 2006 10:30 AM
9/11 Passengers = Big Smoking Gun!

The evidence indicates that the 9/11 passengers onboard AA-77 & UA-93 were murdered somewhere other than at the crash sites. The real perpetrators of 9/11 made a huge mistake in ID’ing all of those passengers with DNA or other methods. (The ID’s were made to facilitate the issuance of death certificates to close the cases & thus end further investigation.) Basic science & commonsense demonstrate that whatever crashed at the Pentagon & Shanksville was obliterated. There is absolutely no way that viable DNA (organic material) could have been recovered from passengers at these sites.