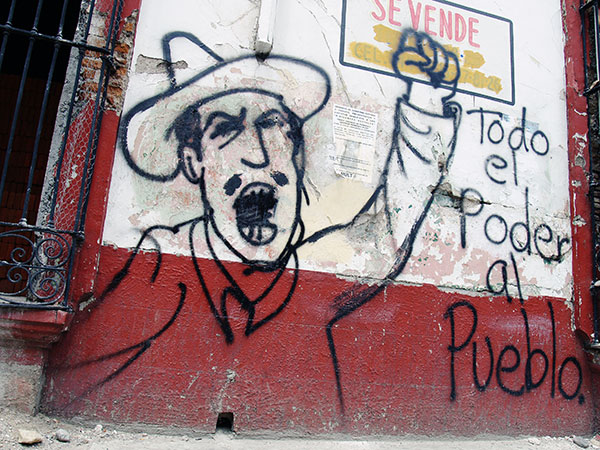 Oaxaca City is almost entirely closed today. The central market, 20th de November, is closed as are almost every single shop, restaurant, cafe and everything else. I am the only tourist staying at my hostel today. It was a major challenge to find a little cafe where I was able to buy a torta (sandwich) and a licaudo de planto (banana smoothie). I can't believe I was able to find an internet connection, this one is wireless, since almost every single door in the city is closed and locked. Since I got to Oaxaca City on August 26th, the Zocalo has been filled with people selling wares and showing videos of Oaxacan resistance, but today even the Zocalo is eerily quite. Though not entirely empty, there are significantly less people with their make-shift shops open.

I also learned of some unfortunate news today. The radio transmissions for Radio La Ley were cut-off sometime during the madrugada (sometime between about 3am and 5am). Radio La Ley, a corporate radio station owned by Texas based Clear Channel, was recently taken over in solidarity with Asamblea Popular del Pueblo de Oaxaca (APPO). Right now there are still about three corporate stations which have been taken over and are broadcasting vital information in solidarity with the people of Oaxaca.

A MegaMarcha will take place on September 1st starting in the community of San Felipe and ending in the center of Oaxaca City. The last march brought about one million people into the streets and another huge turnout is likely on September 1st. Oaxacans are calling for the Ulises Ruiz Ortiz to leave office. The marches, along with today's closure of the city, are demonstrations of the overwhelming unification of Oaxacan civil society. I was also told that a march will take place on September 2nd. I have not seen any propaganda for the march, but have been told that the details are being broadcasted on the radio, both on AM and FM stations.

I was told that Oaxaca will be open tomorrow, August 30th. Well it looks like I am about be asked to leave the patio where I am composing this article.

For more information on the situation in Oaxaca, please check out the following:

People of Oaxaca Under Attack as Their TV Station is Destroyed
http://indymedia.org/en/2006/08/845336.shtml

El Enemigo Común
http://elenemigocomun.net
Add Your Comments
LATEST COMMENTS ABOUT THIS ARTICLE
Listed below are the latest comments about this post.
These comments are submitted anonymously by website visitors.