Add an Event
Newswire
Calendar
Features
Home
Donate
From the Open-Publishing Calendar
From the Open-Publishing Newswire
Indybay Feature
Publish to Newswire
Add an Event
Related Categories: International | Fault Lines
Trouble in the Suburbs: The Dark Side of Post-Soviet Development in Kazakhstan
by Sarah Stuteville, Common Language Project ( commonlanguageproject [at] gmail.com)
Thursday Aug 24th, 2006 3:36 PM
The sounds of construction are ubiquitous in Almaty. Pounding jackhammers, whining saws, and lumbering bulldozers are at work on almost every block of this green, mountain-rimmed Central Asian city. This breakneck development takes place alongside the expensive bistros and Mercedes dealerships that cater to a new generation reveling in the riches of recently discovered oil and gas reserves, giving this city—once considered a sleepy Soviet outpost—a powerfully wealthy and cosmopolitan veneer. 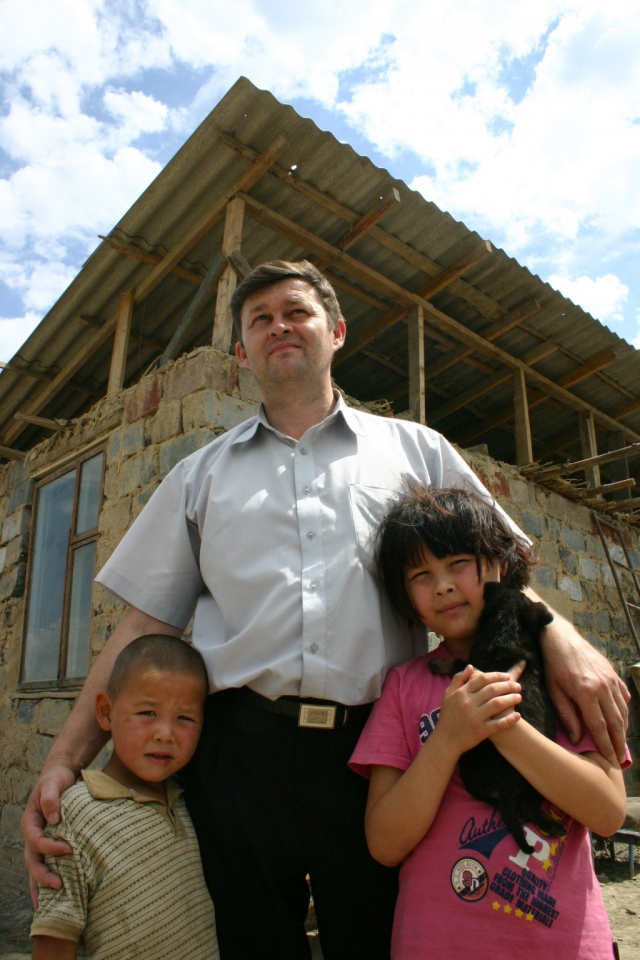 original image (1024x1536)
But all is not well in this city lauded as an economic giant in the region, a model of expedient privatization and post-Soviet development. Kazakhstan’s reality check lies only a few miles outside the city center where a growing movement of discontent among those left behind by the recent boom tells a very different story and reveals a country developing on the shaky foundations of corruption and disparity.

“The oil boom provided enormous wealth,” said Yevgeniy Zhovtis, founder of the Kazakhstan International Bureau for Human Rights and Rule of Law, “but it only happened for some and they are concentrated here in the city. Economically speaking, in Almaty you are Europe, but ten kilometers outside of the center, you are in Asia.”

Nowhere is the economic and cultural schizophrenia of Kazakhstan more pronounced than in the embattled community of Shanyrak on the fringes of Almaty. Here over 100,000 poor and working class people have found themselves pitched against a government determined to sell their property to the highest bidder—in this case a developer looking to build a water park—and clashing with police squads sent to forcibly push residents out. Ironically, it was this very government that less than a decade ago encouraged Shanyrak into existence.

When the Soviet Union fell and Kazakhstan became an independent nation in 1991, there was a concerted effort on the part of the newly formed government to integrate ethnic Kazakhs, many of who lived in far flung rural regions, into urban centers dominated by ethnic Russians. Those lured by promises of cheap land in the outskirts of cities like Almaty bought modest plots from local officials and set to work building new lives in a brand new country.

But alongside rapid development and oil prosperity, a culture of corruption has also flourished. With real estate prices in Almaty now rivaling those of many European cities, the city’s government has decided to reclaim surrounding land for resale to buyers wealthier than migrating Kazakhs driven from their villages by a collapse of rural industries and infrastructure.

Suddenly, Shanyrak homeowners’ deeds are no longer honored: government officials now claim that local people sold them the land illegally. Others, who have squatted land here for years by paying out regular small bribes, have no assurance of long-term legal rights to the property they’ve developed. This conflict came to a head two and a half months ago when police arrived with sledgehammers and bulldozers.

“Coming home from work down the main road one night in April, I was met by my youngest daughter who was yelling, ‘Father, father, they are destroying the house!’” recalled Vladimir Kahimov, a security guard in Almaty and father of four. “She is sometimes a mischievous child, so at first I thought ‘What kind of joke is this to make?’ but then I saw the police, and I knew that it was true.”

Kahimov and his neighbors had previously received a letter demanding that all residents leave their homes, but no demolition date was given, and Shanyrak residents who insist that they have legal rights to their homes say they ignored the notice. Ten homes have been destroyed in Shanyrak in the past six months, but in every case the community immediately pooled their resources and rebuilt the houses within days in keeping with the Kazakh tradition of Ashar—collective house building. They say they will continue to do so and have no intentions of capitulating to the government.

“I bought this land for $1,500 a year and a half ago,” said Kahimov, standing next to rows of trenches and dirt mounds dug by Shanyrak residents in an attempt to hinder future bulldozers, “they can’t destroy our community because we can rebuild our houses in one day. This is our home and whatever happens we will continue to live here.”

This spirit of resistance has grown throughout Almaty’s unincorporated communities, often referred to as “settlements,” which are home to almost ten percent of the city’s population. The past year has brought an onslaught of demolitions and battles with police, with over one hundred houses destroyed, but it has also fostered a sense of solidarity, forming these communities into a cohesive political force.

Their growing movement has gained support from opposition parties who see such disenchanted citizens as a potential constituency—especially in light of last year’s revolution in neighboring Kyrgyzstan, which was largely fueled by similarly disenfranchised rural populations and citizens frustrated by government corruption. Public sympathy has also been strong, and private companies have refused to perform demolitions, meaning that police, or even city prosecutors have had to swing the sledgehammers themselves.

Recent legislation, to take effect in July, will officially secure land rights for current inhabitants of properties in Almaty. While there is hope that this may alleviate some of the problems in the settlements, residents fear that the new law is intended only to protect the rich. Many say it was passed to serve the wealthy who land-grabbed in the immediate wake of the Soviet collapse, and will not be enforced in favor of settlement residents unable to offer substantial bribes to politicians and officials.

“If I were a rich woman, I would be outside of the problem,” says Maysara Biahmetova, a retired teacher who saw her home recently destroyed. “Now it is as before, during the Communist Revolution, when the poor fought against the rich and we must join all of the settlements together, no one else will protect us. Only together will we stop them.”

Twenty miles across town, 40 people lie on iron bed frames, their pale faces illuminated in blue by the tarp that shelters them. Their headbands, torn from tablecloths and tee-shirts, announce the name of their community—Bakai. They are entering their second week of hunger strike.

It was here, on February 21 of this year, that police stormed their settlement, while most residents were gathered outside of the town celebrating a local holiday, and set to work pulling apart their humble clay brick and corrugated tin houses.

When word spread that the police were attacking their homes, Bakai residents fought back with whatever they had: burning tires, sticks, and rocks. They even tried to keep their houses together by padlocking large chains around them, and climbed on to the roofs so the police would be forced to knock them down before proceeding with the demolition. Many Bakai citizens were wounded and arrested.

Despite their resistance, five homes were destroyed that day and Bakai residents say that they have lost two or three houses to police raids every month since. They see their current hunger strike, which has been joined by many citizens of other settlements including Shanyrak, as their last resort.

“We are waiting for legislation that promises that these houses are ours,” said Vinera Ismagulova, leaning against a folding table outside of the hunger strike tent that sags beneath the weight of paperwork filed on behalf of Bakai Settlement. “We’ll stay on strike until we get an answer, we will not give up.”

Despite the efforts of Bakai hunger strikers to call attention to their struggle and pressure Kazakhstan’s government to respect their rights, their situation recently took a turn for the worse.

On July 7, police destroyed almost all of the remaining houses in Bakai. A court decision called for demolition of 30 of these buildings, but another 400 were destroyed on the verbal orders of the mayor, despite the documentation of legal ownership held by most residents in these homes. The raid on Bakai left over 1000 residents homeless, without food, water, or any assistance from local authorities.

A week later, on July 14, police entered the Shanyrak settlement, with court orders calling for more mass demolitions. Having seen the authorities literally bulldoze over the Bakai residents’ attempts at non-violent resistance, the people of Shanyrak acted more aggressively. Attacks by riot police with concussion grenades and rubber bullets were deflected by residents armed with stones and Molotov cocktails. The clashes left one policeman dead, another badly burned, and thirty more with minor injuries. Four police were taken hostage by residents, but were later released. About forty Shanyrak residents were injured, but no homes were successfully demolished.

Since these clashes, Almaty police have retaliated by arresting or just beating up close to a hundred Shanyrak residents, and returning to the rubble of Bakai settlement to arrest any able bodied men still living in the ruins of their houses. For now, the homes of Shanyrak still stand, but residents fear that it won’t be long until the authorities return with greater force.

This article was originally published by the Common Language Project. For more info, visit http://www.commonlanguageproject.net 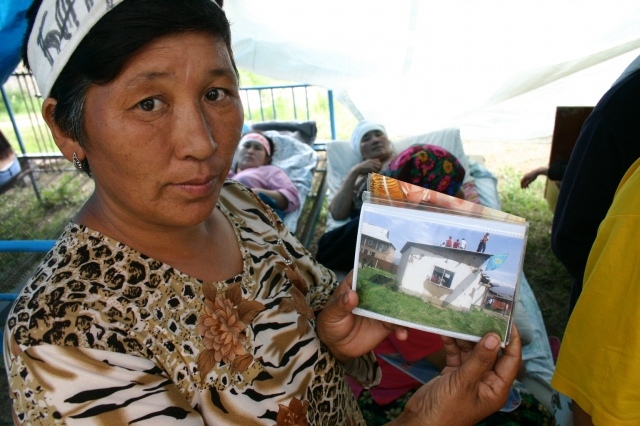 original image (1536x1024)
A Bakai resident displays a photo of her house. Behind her, hunger strikers rest on cots. (Photo by Alex Stonehill)
§The Dark Side of Post-Soviet Development in Kazakhstan
by Sarah Stuteville, Common Language Project Thursday Aug 24th, 2006 3:36 PM 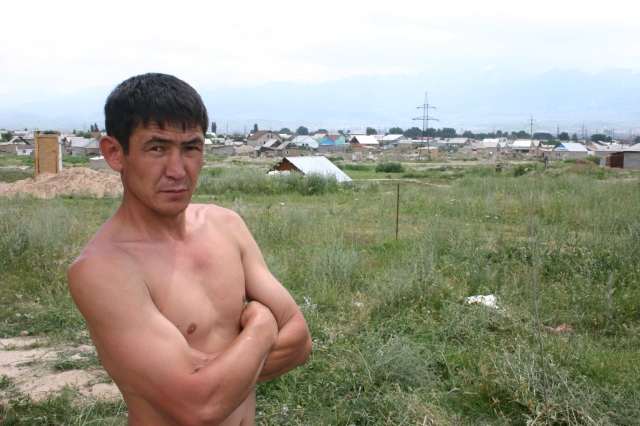 original image (1536x1024)
The city's government has decided to reclaim surrounding land for resale to buyers wealthier than migrating Kazakhs driven from their villages by a collapse of rural industries and infrastructure. (Photo by Alex Stonehill)
Add Your Comments
Support Independent Media
We are 100% volunteer and depend on your participation to sustain our efforts!