Add an Event
Newswire
Calendar
Features
Home
Donate
From the Open-Publishing Calendar
From the Open-Publishing Newswire
Indybay Feature
Publish to Newswire
Add an Event
Related Categories: International | Fault Lines
Rebels and Refugees: Darfuris Make Their Demands
by Shane Bauer (sfbay-print [at] lists.indymedia.org)
Thursday Aug 24th, 2006 2:41 PM
Sixteen year old “Moro” is reputed to be one of the fiercest fighters from the rebel battalion based in Muzbat, a North Darfuri village now transformed into a Sudanese Liberation Army (SLA) base. Unlike his jovial comrades, Moro has the stern look of a hardened soldier. He shows me a bullet casing tightly wrapped in leather and dangling from his necklace. “As long as I wear this [the military and Janjaweed] can’t kill me,” he said last June. What has made him so fierce? “Circumstances,” he says bluntly. “Because they burned our homes and stole our property.” 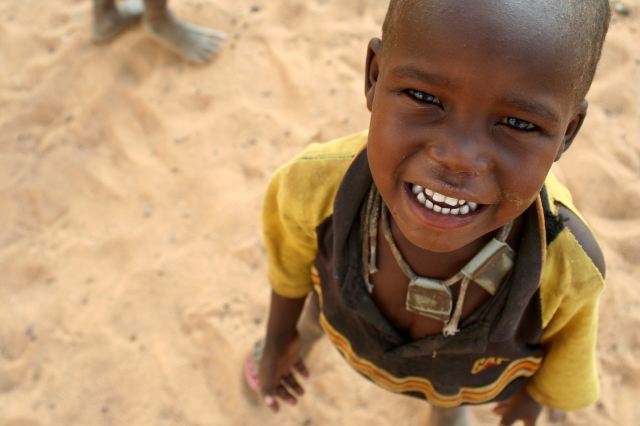 original image (3456x2304)
Far from hard-bitten warriors, the majority of the mostly twenty-something rebels in Moro’s all-male group would rather discuss Bob Marley and make jokes under the stars than recount atrocities. After more than three years of fighting, they are eager for peace and the reestablishment of normalcy in Sudan’s Western region of Darfur, which currently lies mostly barren outside of the urban centers or internally displaced people’s (IDP) camps. Despite the fact that most of them have lost family members and have no villages to return to, they still talk about their revolution with the fervor of newly impassioned idealists.

Senior SLA commander “Sisco” Al-Sadig Yusif Hamid, who like the rest of Darfur’s rebels rarely has the chance to speak to the western press, says that before the war, “Darfur was suffering from hunger, underdevelopment, marginalization, social stratification, lack of health and educational facilities,” and increased pillaging by members of the Arab tribes. SLA’s Vice Director of Intelligence, Abbas Ibrahim, says the reason that the SLA rose up against the Sudanese government in 2003 was to fight “for all marginalized people” in Sudan, but particularly those in the Darfur region. “All the power is concentrated in the capital,” he says. “Here in Darfur, there [was] no difference between people and animals. This is what led us to create the SLA.”

Prior to the SLA’s first attack against the government in the city of Al-Fashir on April 25, 2003, Darfur had long been a region of tension. The limitation of natural resources has historically led to conflicts in the region between mostly black sedentary agriculturalists and Arab nomadic pastoralists. Desertification, which has brought about periods of severe drought since the second half of the 20th century, has pushed Arab tribes in Darfur into grazing their livestock on the rich agricultural lands and pastures of the sedentary populations. With the increased pressure of a degrading environment, competition over natural resources between agriculturalists and pastoralists became more severe, and cattle raids turned into full-fledged conflicts.

Then when the SLA, mostly made up of black Darfuris, rose up demanding that the Sudanese government end the discrimination against their people, President Omar Al-Bashir took advantage of Darfur’s pre-existing conflicts by arming, financing, and training certain elements of the Arab tribes, who came to be known as “devils on horsebacks,” or Janjaweed in Arabic. It used its military to bomb the mud and straw villages of these black ethnic groups, and hired the Janjaweed to burn villages, steal livestock, rape, and massacre Darfur’s black population.

After three years of a war that has claimed the lives of between 200,000-400,000 people, the signing of the new Darfur Peace Agreement (DPA) on May 5, provided a glimmer of hope that the killing might end. Pushed by the United Nations, African Union, and United States, the most powerful faction of the SLA, led by Minni Arkou Minawi, was the only rebel group to sign with the government. In the agreement, the Sudanese government promises to disarm janjaweed militias, integrate 4,000 former rebels into the military, limited funds for reconstruction, and grant the fourth highest government position to a former rebel.

Hamid says that he is waiting for the agreement to be implemented on the ground so that refugees can return to their homes and try to build a new life. Yet he, along with many of Minawi’s SLA rebels, is skeptical that the government will keep up its end of the deal. Since the agreement was signed, he says that he has yet to see any real changes. Although there haven’t been clashes between Minawi’s SLA faction and the government he says, “The janjaweed are still attacking innocent people – women and children. Concerning genocide, the janjaweed are still at work.” As of July, the Sudanese government has broken its commitment to disarm the janjaweed five times.

While many of Minawi’s rebels are skeptical of the DPA, the majority of Darfur’s population rejects it outright. Armed revolution in Darfur is vehemently supported by the region’s black civilian population. Most of the 200,000 refugees in Chad and 2 million IDPs in Darfur though, feel that Minawi’s faction of the SLA, which is the strongest military force in the rebellion, has betrayed them by signing what they see as an empty agreement. They feel that the content of the DPA doesn’t come close to providing compensation, protection them from their genocidal government, or addressing long-standing injustice in Darfur.

The two other main rebel groups – Abdel Wahid’s faction of the SLA and the Justice and Equality Movement (JEM) – refused to sign the agreement because they say that it doesn’t speak for the displaced or address the structural inequalities between central Sudan and its periphery. Ishaq Haron, head of the Treguine refugee camp in Chad which houses over 14,000 refugees, says “Abdel Wahid and Dr. Khalil didn’t sign and we support them. A signature is not enough for us. These (rebel) movements must speak about the refugees (in Chad) and IDPs in Darfur,” a point that he feels Minawi has failed to do by signing the accord. “They may want an instant solution,” JEM said on their website, “but we want a lasting one.”

Bokhit Dabo, a former mayor in Darfur and a refugee leader in Chad’s 29,600 resident Ouri Cassoni camp outlines the refugee’s five demands. “We demand individual reparations for what they stole from us and destroyed during the war, the disarmament of the janjaweed, the intervention of international forces, reconstruction, and development.”

Being the sole source of most people’s livelihoods, compensation for the livestock that was pillaged by the Janjaweed is essential to the survival of most Darfuris. Although they want to leave the camps as soon as possible, Dabo says that they will not return home until the first three demands are met.

Ask any black Darfuri what they need most and they will tell you international intervention, without hesitation. Refugees feel certain that if they return, they will face a situation that was worse than when they left. “If we return without UN forces, it will be a slaughter,” says Jamal Al-Deen Daud, the head of Chad’s Bredjine camp, which houses over 27,000 refugees.

Sudanese President Omar Al-Bashir has recently refused to allow UN peacekeepers to enter Darfur. Without the permission of Al-Bashir or an unlikely consensus from the Security Council to override the authority of the Sudanese government, UN forces say that they will not intervene. Two and a half million displaced Darfuris are infuriated by this prospect. One refugee, Ahmed Abdullah Mohammed says, “The international community should be asking the rebel movements in Darfur if they want intervention, not the Sudanese government.” Referring to the contradiction of requiring the permission of an architect of genocide for intervention, Dabo asks “If a snake bites you, do you go back to ask it for medicine?”

Shane Bauer is a writer and photographer whose work focuses on regions of political, social, and economic tension. He has spent time documenting conflicts and intervention in the Balkans, and cultures in the Middle East and Africa. 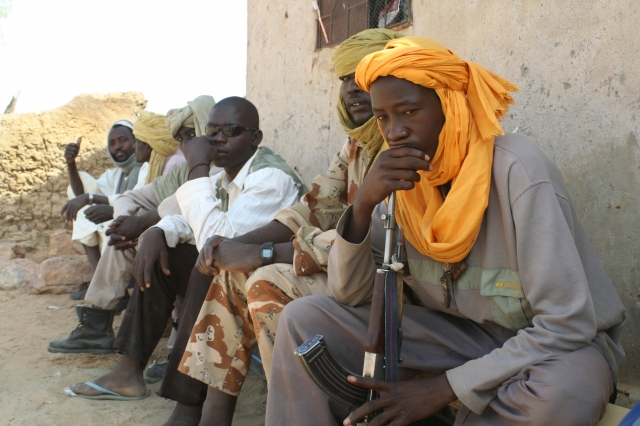 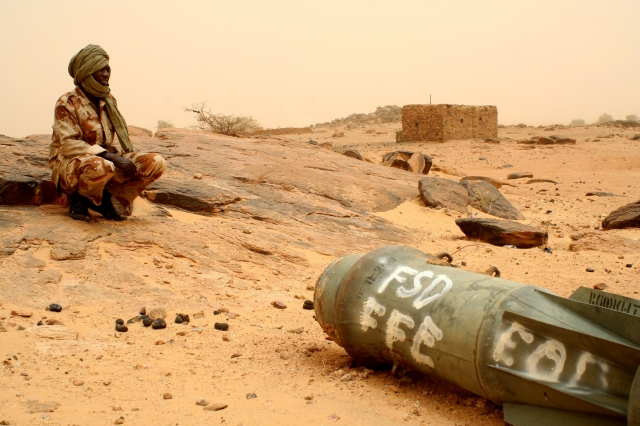 original image (3456x2304)
Although the Sudanese government controls the large cities, most of the territory in Darfur is now controlled by various rebel groups. (Photo by Shane Bauer)
§Rebels and Refugees
by Shane Bauer Thursday Aug 24th, 2006 2:41 PM

original image (3438x1596)
Villages throughout Darfur have been abandoned, their inhabitants having fled to camps within Darfur or Chad. All that is left of most of them are the charred circular walls of their former homes. (Photo by Shane Bauer)
Add Your Comments
LATEST COMMENTS ABOUT THIS ARTICLE
Listed below are the latest comments about this post.
These comments are submitted anonymously by website visitors.