Add an Event
Newswire
Calendar
Features
Home
Donate
From the Open-Publishing Calendar
From the Open-Publishing Newswire
Indybay Feature
Publish to Newswire
Add an Event
Related Categories: East Bay | Fault Lines | Global Justice & Anti-Capitalism
Emeryville: The “Dirtiest Little Town on the Pacific Coast”
by Hannah Potassium (sfbay-print [at] lists.indymedia.org)
Thursday Aug 24th, 2006 12:03 AM
Emeryville swells as a phenomenon for the rising generation—a theme park for the culturally vacant, a carnival ride for those content to watch their money burn. It’s a wonder that the place can be considered a township at all, as the most powerful politicians are quite realistically Pixar, Chiron, Siebel Systems, and Ikea (of which the former two have their own “districts” and the latter is a “big box” retail structure). 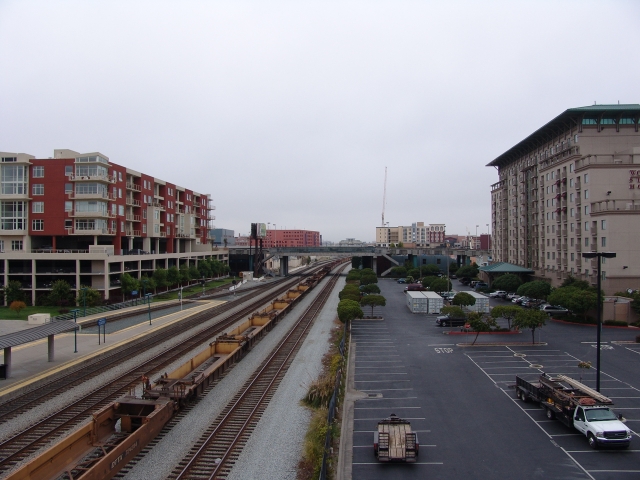 original image (1280x960)
Between the fictional characters of the animation studio and the mad scientists of the biotechnology lab, it is easy to forget about the reality of place in this consummate fantasyland.

Its portrayal of Main Street, USA is eerily accurate. However, the utopian vision of flawless, exemplary Emeryville carries with it dark undertones more complicated than choosing what to order at the Marketplace food court and far less pleasant than even the stench of Abercrombie and Fitch cologne that wafts across the tracks.

Emeryville has always been an epicenter for vice and corruption. Beginning with the brutal usurpation of land from the Ohlone tribes by the Spanish in the late 1700s, there has consistently been a thinly veiled obsession with profit that masquerades as “culture.” Police Chief Ken James calls it “the little city that can.” Their motto is: “Our strength is our people.”
But with a population of less than 7,000 (according to the 2000 census) in a space of just over one square mile, we might have to hope for some unusually strong people…or a secret weapon.

Is it really the city’s people that make it so powerful? Most of its residents actually commute out to work in other parts of the Bay Area. And most of its employees are imported in. Professional jobs dominate employment in Emeryville at 25 percent, with managerial and executive positions close behind at 19.8 percent. The rest of the work is mostly retail, which makes sense because the city is essentially just a very large mall. Such jobs tend to be dominated by white folks, and would thus alter the census’ statistic of a mere 45 percent white population.

As Emeryville juxtaposes itself quaintly beside big, bad Oakland, it discreetly aims to attract a bulk of white people with deep pockets. Currently twelve major development projects are underway within city limits, tending to be cumbersome and architecturally monotonous loft complexes. This will provide construction jobs for many, though it is quite likely that these workers will never be able to afford the very residences they are building.

According to the Agency’s Inclusionary Zoning Ordinance, at least 20 percent of new residential units must be designated “affordable housing.” But the ambiguity of the word “affordable” (meaning in this context an individual $46,350 per year income or less) may lend itself to an exclusion of a number of potential homeowners. Low (or even moderate) income families may find themselves chased to the other side of the invisible Oakland/Emeryville line, the subtle claws of gentrification scratching at their heels.

One illustration of this city’s underpinning commitment to homogenization is the array of bizarre, one-time grants that the Economic Development Department offers to property owners who want to improve the aesthetic of their property and increase its value—including the $5,000 “Wrought Iron Fence Grant,” which promises to remove any “existing, non-conforming fence” and replace it with a “decorative, open type” one.

The model example of this New Urbanism is the Bay Street Mall: “a vertically integrated mixed-use community where one can live, work, shop, dine, and recreate without the need for an automobile.” This development’s PR has been painfully effective, cloaking obvious displacement in subtle buzzwords and pretty phrases like “urban renewal.” The San Francisco Chronicle touts Bay Street as a “European-style urban village.” It is this same language that morphs “high-end chain stores” into “shops and boutiques,” and “corporate personhood” into “community.” With one-bedroom condos ranging from $650,000 to $730,000 above stores such as Gap, Banana Republic, and Pottery Barn, skewed jargon like “village” becomes mere newspeak.

With a long tradition of debauchery, Bay Street’s capitalist predecessors may have been proud to witness the lasting crooked nature of the city. Nothing underscores this notion better than when, in 1876, the city stuck a dance pavilion directly atop the last remaining Ohlone shellmound—and quite literally danced on the ashes of the natives.

By the late nineteenth century, Emeryville had earned the title of the “Entertainment Capital of the Easy Bay” with its saloons, brothels, card clubs, and racetracks, buttressed by further illegal gambling and a lucrative business in speakeasies during Prohibition. Earl Warren, the District Attorney of Alameda County at the time, once raided the Emeryville Police Garage to find a “liquor fleet” of five cars holding 565 gallons of booze. He had been quoted saying, “Within a block of the police of Emeryville are 12 houses of prostitution and 20 bootlegging joints.” This center of vice had few rivals.

With the criminalization of horseracing in 1911, the red-light district morphed into an industrial hub for the Bay Area, consuming nearly 80 percent of the city with paint factories, chemical manufacturers, petroleum refineries, canneries, slaughterhouses, and more. The slaughterhouses were so numerous, in fact, that the area became known as Butchertown; a place engulfed by a detestable stench of manure and burning bones.

For all of these reasons, residents deemed Emeryville “morally reprehensive” and began to organize for reform. As a result, landowners, investors, and industrialists adopted the most obvious solution to the problem the reformist groups posed: they simply redrew the city boundaries to exclude every church and complaining neighborhood. Emeryville has since flourished (or festered) as an icon of decadence and destruction …proving that this “little city that can” could actually do quite a bit.

These days, Emeryville likes to think of itself as undergoing a Renaissance of sorts. But rather than a complete makeover, it can realistically only dab a bit of cosmetic powder on its blemishes, leaving an embarrassing cakey residue. Brownfields—or land that is considered toxic due to industry—comprise over one quarter of the city’s landmass. Diesel fumes, exhaust, and the unmistakable fetor from a heavily contaminated Bay hangs in the air. Emeryville’s sordid past is, in many ways, irreversible.

In 1915, the city began slowly covering the Temescal Creek, and by 2005 there were no visible remains. According to the 1993 General Plan, no wildlife or important plant communities exist at all east of the 580 freeway. The Emeryville Crescent tidal marsh is home to over 100 wildlife species, including endangered animals like the Salt Marsh Harvest Mouse and the California Clapper Rail. But human pollution is choking them and destroying the marsh’s ecosystem … while the mudflats are just downright ugly. It is worth noting that the coastline of the San Francisco Bay has significantly changed shape since 1820 as a result of the century of industry surrounding it. Earl Warren called Emeryville “the dirtiest little town on the Pacific Coast.” Perhaps he meant it in more ways than one.

The new strategy, as outlined in a report on the city’s website, is to increase green space, decrease wasted space, add more mixed use complexes, and overall make Emeryville more dense and walkable. (Currently, of the 790 acres that comprise the city, 160 acres are parking lots and garages, and only 33 acres are considered “open space.”) 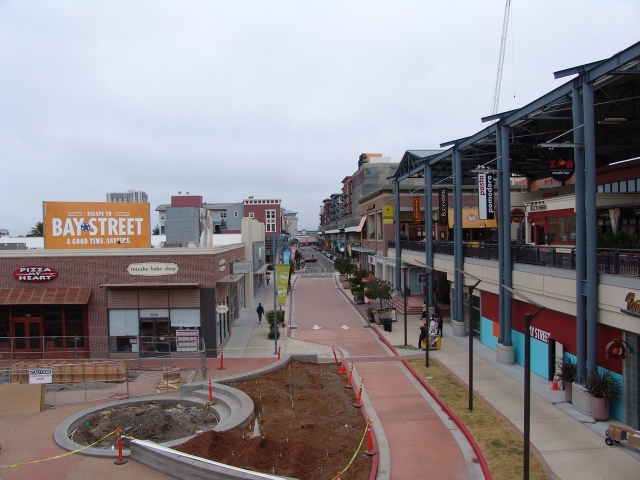 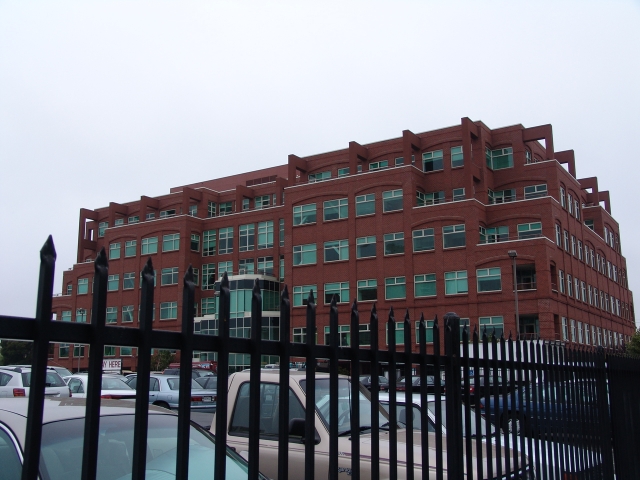 original image (1280x960)
Photos by Liam O'Donoghue
Add Your Comments
LATEST COMMENTS ABOUT THIS ARTICLE
Listed below are the latest comments about this post.
These comments are submitted anonymously by website visitors.