Add an Event
Newswire
Calendar
Features
Home
Donate
From the Open-Publishing Calendar
From the Open-Publishing Newswire
Indybay Feature
Publish to Newswire
Add an Event
Related Categories: U.S. | Fault Lines | Womyn
Chaos at the Clinic: On the Frontline of the Reproductive Rights War
by Emily and Josh (sfbay-print [at] lists.indymedia.org)
Wednesday Aug 23rd, 2006 11:47 PM
During the third week of July, anti-abortion activists from all over the country converged on Jackson, Mississippi under the banner Operation Save America. Jackson is home to the only abortion clinic in Mississippi. Many women already must travel outside of the state for reproductive healthcare, including abortions. If this clinic closes, choices will be even more limited for the women of Mississippi. 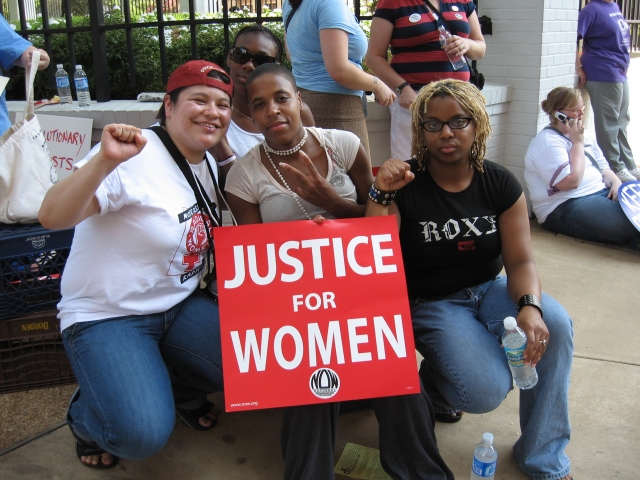 original image (2592x1944)
Operation Save America, formerly “Operation Rescue,” is one of the largest anti-choice groups in the United States. OR was founded in the 1980s, and both groups have organized civil disobedience and direct actions around clinics.

A contingent of grassroots aactivists from across the country collaborated to counter OSA’s self-described “siege on the last abortion clinic”. The Mississippi Reproductive Freedom Summer included the groups Jackson NOW, the Southern Abortion Fund and Oakland-based Radical Women. Radical Women posted an update on Indybay in the days leading up to the protests clearly stating the reason for their presence, “rightwing anti-abortionists... agenda would send society back to the era when women’s ‘place’ was barefoot and pregnant in the kitchen and the ‘place’ for people of color was on the back of the bus.”

In the weeks leading up OSA’s national event in Jackson, the organization spewed rhetoric about “storming the gates of Hell” and “the beginning to the end of abortion in Mississippi, and in America.” Twice in their short brochure urging people to come to Jackson, Operation Save America touches on the great evils of Abortion, Homosexuality, and Islam. In addition, the group opposes comprehensive sex education, contraceptives, and feminism. While they have never expressly supported clinic violence, they have also failed to condemn it.

In Jackson, Operation Save America focused on rallies at the clinic, the Capitol building, a park, and two queer-friendly churches while demonstrating throughout the city.

The Jackson Women’s Health Organization—one of the main targets—was subject to almost constant protests during the week. However, the clinic had increased security and maintained a dedicated escorting staff, ensuring that those who sought their services would be able to enter. In a July 20 interview on Pacifica Radio’s news magazine show, “Flashpoints,” Betty Thompson a consultant to the clinic and one time administrator spoke about the necessity of the health care facility, “We think it’s really important that we are here. We have a huge job to do. We have an enormous responsibility to women, to the people that work at the clinic and to all of the women of the state of Mississippi. And we are going to try to stand up and meet the challenge.”

Regardless, clients still faced harassment. To delay entry into the clinic, protestors outside were verbally abusive and used every tactic they could without getting arrested.
Members of Operation Save America were blocked from entering a queer-friendly Unitarian church by anarchists. A brazen OSA member attempted to drive his car onto the grounds only to have it besieged by angry pro-choice radicals, and only after damage was done to the car did he retreat.

Many anti-choice activists displayed doctored pictures of 21-week or older fetuses (claiming that they were much younger) and compared abortion to the holocaust and lynching. Members of the organization wore shirts that condemned homosexuality, Islam, and feminism among many other sins, or shirts that stated: “Truth is hate to those that hate the truth.”

Every person should have the right to choose their own medical care and to have access to that care without being forced to listen to lies and biased information. In their demonstrations at the state capitol, OSA issued an “Emancipation Proclamation” for the “unborn”—as they refer to fetuses, viable or not.

The next day they tore up six Supreme Court decisions concerning abortion, homosexuality, and the separation of church and state, as well as the GLBT pride flag and a copy of the Koran. They later burned these items.

Counter demonstrations by Mississippi Reproductive Freedom Summer included several rallies and marches, as well as days dedicated to outreach—to talk to community members about issues of reproductive health—such as access to emergency contraceptives.

The story of reproductive rights in Mississippi and the United States is much more complicated then groups of Christian Fundamentalists hurling insults and displaying grotesquely inaccurate signs. In Mississippi, anti-choice activists have been slowly taking away reproductive rights by passing laws that make it harder for clinics to operate, introducing 24-hour waiting periods, forcing women to listen to scientifically unsound state-sponsored counseling, pushing for abstinence-only sex education, and limiting overall access to health care, particularly for low-income women and teenagers. All these things combine to make having or not having an abortion less of a choice.

Throughout the United States similar laws are being passed, and reproductive rights are being destroyed. From education to comprehensive healthcare to contraceptive access, all fronts of the struggle are being attacked. In light of this, Mississippi is hardly an extreme example of what may happen to reproductive freedom throughout the nation if groups like Operation Save America and other anti-woman, anti-choice, racist organizations have their way.