Add an Event
Newswire
Calendar
Features
Home
Donate
From the Open-Publishing Calendar
From the Open-Publishing Newswire
Indybay Feature
Publish to Newswire
Add an Event
Related Categories: Palestine | International | Fault Lines
Bombs Over Beirut
by Sakura Saunders (sfbay-print [at] lists.indymedia.org)
Wednesday Aug 23rd, 2006 11:40 PM
Within the past month, Lebanon, a country recently celebrated as a model democracy in the Middle East, has been devastated by Israeli air strikes and ground incursions. The conflict was sparked by Hezbollah’s July 12 operation that left three Israeli soldiers dead, and two captured. Hezbollah intended to use these soldiers in a political prisoner exchange, as they have done in the past. Instead, the incident quickly escalated into a full-scale aerial attack on Lebanon’s population and vital infrastructure. Key bridges, roads, power plants, ports, and Beirut’s international airport were all targeted in the campaign later revealed to have been planned by Israel over three years prior. 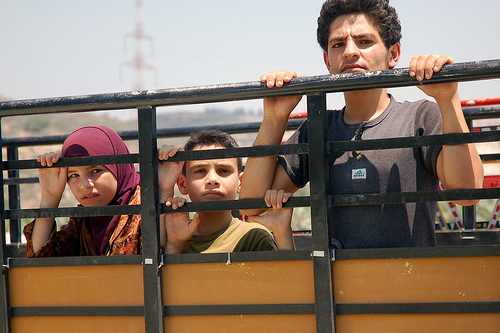 Hezbollah retaliated by launching a series of missile and rocket barrages into Northern Israel, including Haifa. While Hezbollah’s actions were initially criticized by “moderate” Arab states, such as Saudi Arabia, Egypt and Jordan, there now exists a consensus of outrage over the extent of Israel’s attacks and support for Lebanon’s ceasefire demands, while Hezbollah enjoys increasing support in Lebanon and the rest of the Arab and Muslim world.

These recent developments echo Hezbollah’s past, which is highly regarded as the only Arab guerrilla force to ever regain Israeli occupied territory without negotiating. Hezbollah formed out of a resistance to the occupation of southern Lebanon, which Israel invaded in 1978 (and again in 1982) to root out the Palestine Liberation Organization (PLO). Israel remained in southern Lebanon for eighteen years and continues to occupy the Shebaa farms; a territory that Lebanon claims as it own, but Israel insists belongs to Syria. Interestingly, Hezbollah has successfully used Israel’s ongoing occupation of the Shebaa farms to justify their continued armament, while all of the other militias formed during Lebanon’s years of occupation and civil war have been disbanded.

In addition to having a heavily armed militia, Hezbollah participates in Lebanese society in a number of significant ways. They hold 14 seats in Lebanon’s 128-seat parliament, which balances power between Christian Maronites and Muslim Sunni and Shia. They also provide many social services, including schools, housing and health support for the poor.

Regarding Hezbollah solely as militant fundamentalist Islamists is misleading. Their actions suggest that they are primarily a nationalist organization, as evidenced by their unwillingness to punish the Christians in southern Lebanon, who had aided Israeli occupiers after Israel withdrew from the region. According to UC Irvine’s Lara Deeb, “many of Hezbollah’s constituents do not want to live in an Islamic state; rather, they want the party to represent their interests within a pluralist Lebanon.”

Also, the make-up of Hezbollah does not reflect their fundamentalist image, especially in times of greatest resistance. In a recent New York Times editorial, Robert Pape revealed that the vast majority of Hezbollah suicide bombers from 1982 to 1986 (the period with the highest concentration of Hezbollah suicide attacks) were not Islamic fundamentalists. The suicide bombers reflected the broader anger within Lebanese society against foreign occupation; many belonged to leftist organizations and some were even Christian.

Lebanon is understandably desperate for an end to this conflict. The country’s economy, which had seen strong development following the end of the 15-year civil war, is now losing an estimated $70 million a day. In addition to displacing a quarter of Lebanon’s four million person population, the conflict has stranded many Lebanese without humanitarian aid in the villages of the south where much of the ground fighting has taken place. It has also prevented clean-up of the largest oil spill since the Exxon-Valdez, covering 50 miles of Lebanon’s coast, which resulted from the July and 15 bombing of an oil-fueled power plant south of Beirut.

Israel has paid a high toll for this conflict as well, with approximately 300,000 displaced, and even more living in bomb shelters. Despite the general support for the campaign within Israel, thousands have gathered on the streets of Tel Aviv to demand an end to the violence. All of this is taking place under the violent backdrop of another Israeli war in the Gaza Strip which, like the attack on Lebanon, was launched after an Israeli soldier was kidnapped, this time by Hamas.

But, despite the widespread desire for an immediate cessation of violence, the US and Britain have consistently blocked any attempt at restricting Israel’s destructive campaigns. To the contrary, the US has rushed shipments of emergency fuel and laser-guided weapons to re-supply the Israeli military. The Arab nations continue to demand a ceasefire agreement that demands the end of the occupation of Southern Lebanon, but no UN agreement thus far has ordered Israel to relinquish control. As the Lebanese people are further brought to their knees and the country’s economy obliterated, Israel now finds itself stuck in a conflict with an enemy that is the focal point of Arab and Muslim anger towards foreign occupation. The consequences for both Israeli and Arab lives in the region will be severe. 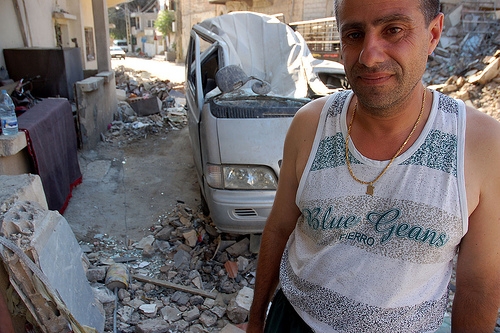 Photos by Massr
Add Your Comments
Support Independent Media
We are 100% volunteer and depend on your participation to sustain our efforts!