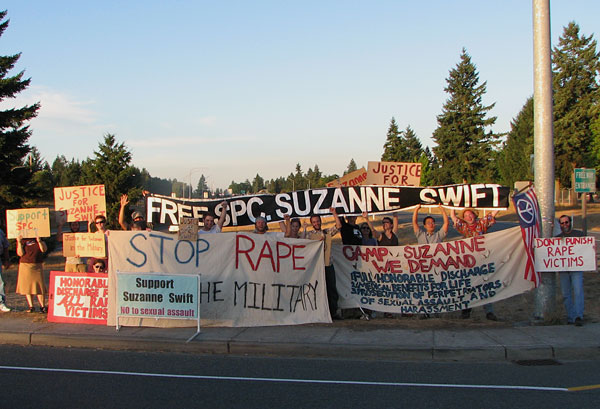 FORT LEWIS, WA (August 19, 2006) – Two dozen supporters of Army Specialist Suzanne Swift gathered outside of the gates of Fort Lewis to demand an immediate honorable discharge for the Iraq veteran. Organizers of “Camp Suzanne” intend to have an ongoing presence across from the fort entrance until the Army takes action on their demands. Statements of support from U.S. Army Colonel Ann Wright (ret.) and Gold Star Families for Peace co-founder Cindy Sheehan were read to gathered supporters, followed by a message via cell phone from Suzane’s mother Sara Rich.

Specialist Swift refused to return to Iraq because of the extreme duress she suffered in the form of sexual harassment at the hands of three of her commanding officers. One even coerced her into a sexual relationship, telling her, "If you say anything, I'll make your life a living hell." Swift has since been diagnosed with Post-Traumatic Stress Disorder (PTSD). Nonetheless, upon being sent to Ft. Lewis after being arrested at her mother’s house while AWOL from the Army, she was forced back into fatigues and into active duty, even while her accusations are under investigation.

Last weekend, members of Veterans for Peace during their national convention in Seattle, held a press conference organized by the women’s caucus. Backed by many women veterans who clearly understood the very common abuses Spc. Swift has endured, Sara Rich spoke of her efforts to win an honorable discharge and medical benefits for her daughter.
http://suzanneswift.org/
§"We demand Swift justice!"
by Jeff Paterson, Not in Our Name Sunday Aug 20th, 2006 1:09 PM 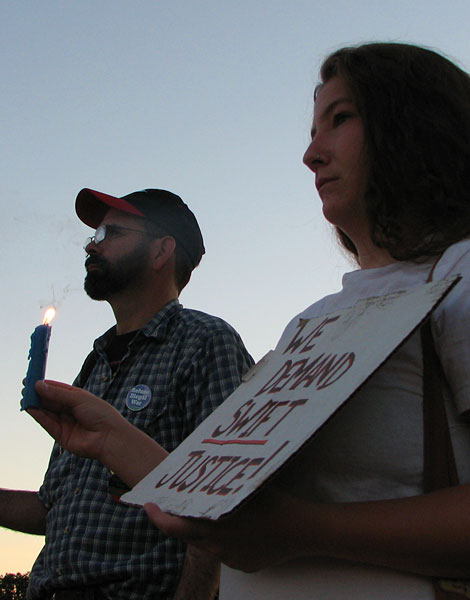 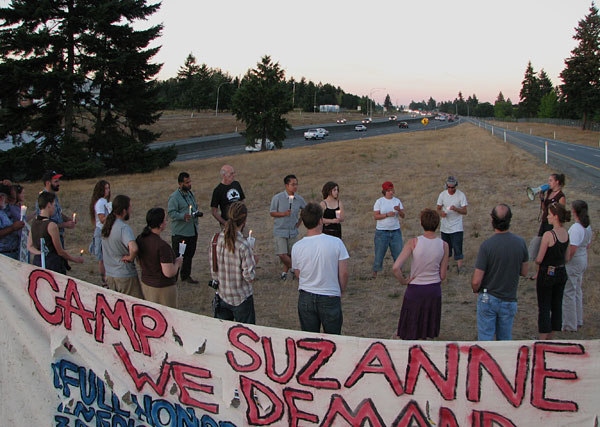 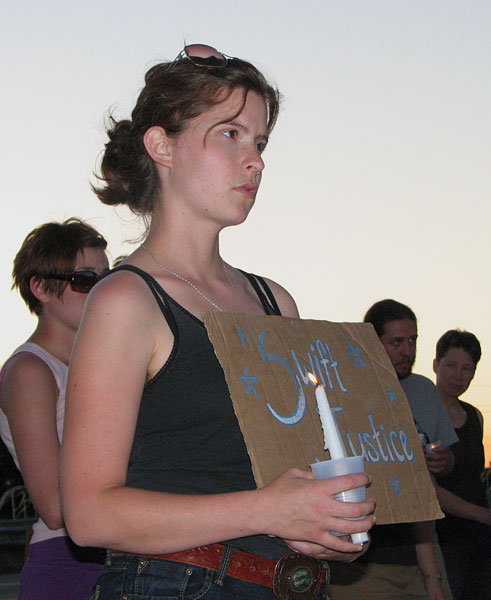 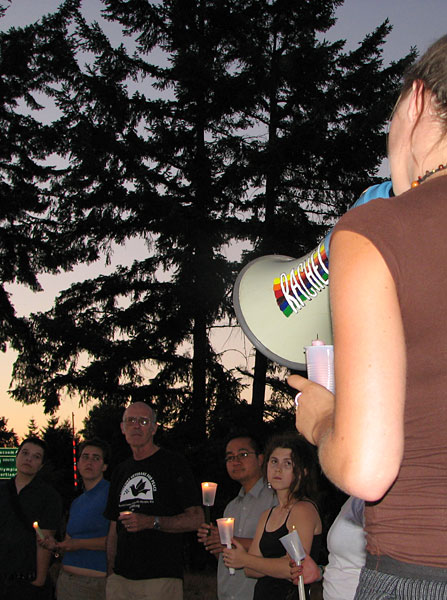 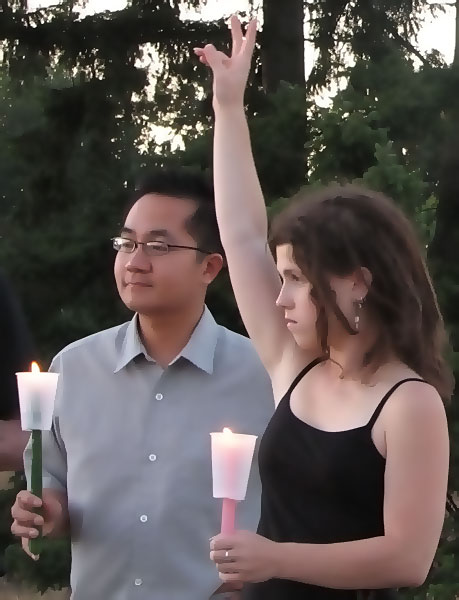 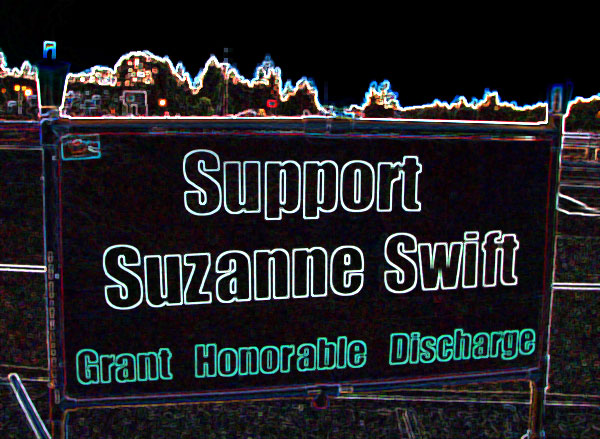 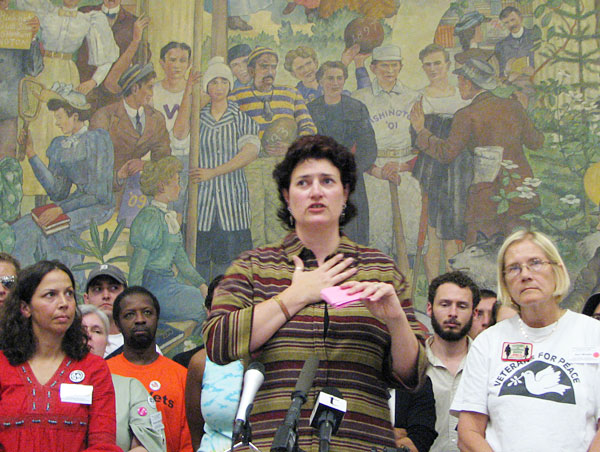 §April Fitzsimmons relates her story of abuse while serving in the military
by Jeff Paterson, Not in Our Name Sunday Aug 20th, 2006 1:09 PM 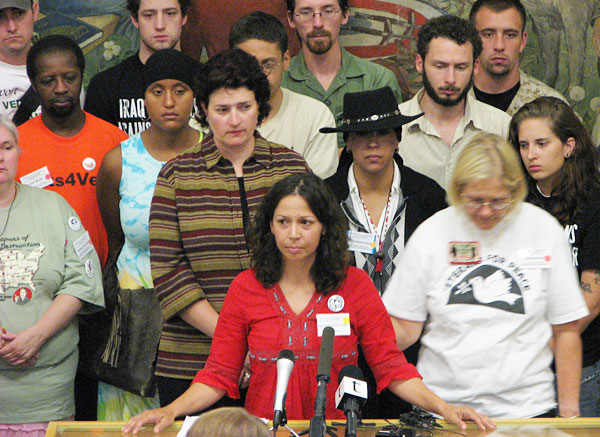 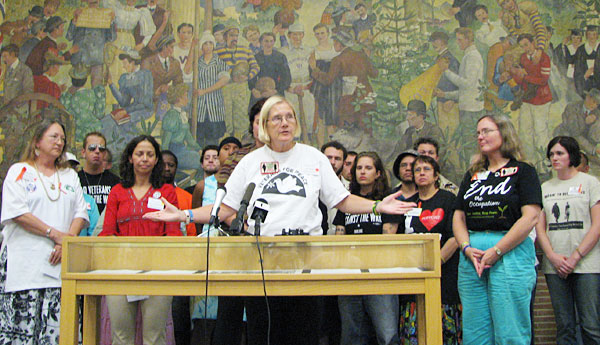 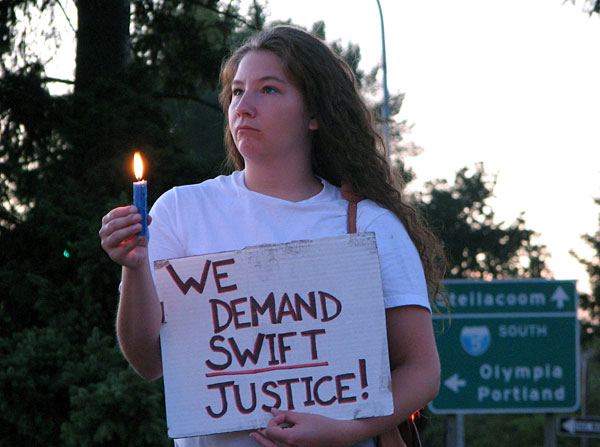 §Spc Swift supporter announces vigil during Aug 16 rally for Lt. Ehren Watada
by Jeff Paterson, Not in Our Name Sunday Aug 20th, 2006 1:09 PM
Add Your Comments
Support Independent Media
We are 100% volunteer and depend on your participation to sustain our efforts!