Add an Event
Newswire
Calendar
Features
Home
Donate
From the Open-Publishing Calendar
From the Open-Publishing Newswire
Indybay Feature
Publish to Newswire
Add an Event
Related Categories: Palestine | Santa Cruz Indymedia
Defining Our Side: In the Struggle of Unequals the Anti-War Movement Must Take a Stand
by Alessandro Tinonga
Monday Aug 7th, 2006 5:15 PM
Why the anti-war movement needs to unite with Palestine and Lebanon, and all forms of resistance. 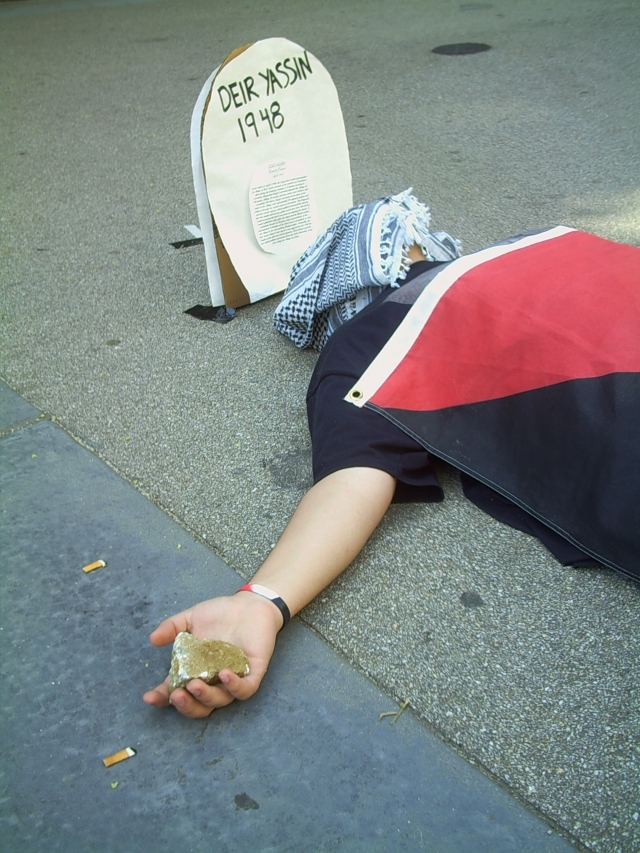 original image (2160x2880)
Defining Our Side: In the Struggle of Unequals the Anti-War Movement Must Take a Stand
By Alessandro Tinonga

The war against Lebanon is absolutely shocking. According to the BBC, the number of Lebanese casualties may be as high as 900 after nearly four weeks of fighting (http://news.bbc.co.uk/2/hi/middle_east/5242732.stm). Almost one third of the dead are children under the age of 12. Latest UN estimates for displaced people in Lebanon put the figure at between 700,000 and 800,000.

The U.S. shares the responsibility of this aggressive war, because they give Israel nearly $3 billion every year. In 2007, the annual assistance package to Israel is comprised of USD 2.34 billion in military aid, in addition to USD 120 million in standard economic aid. Further, the U.S. government gives political backing it needs to appear ‘legitimate’. Not only do they receive unanimous support form the Republican Party, but nearly the same amount of support from the Democrats including ‘anti-war’ politicians like Howard Dean (http://www.wsws.org/articles/2006/aug2006/dems-a05.shtml).

For those of us in the anti-war movement, we must take a stand against the violence being perpetrated against the Lebanese and the Palestinian people.

However, there is a clear point of division amongst the anti-war movement: how to address the issue of national liberation. This division manifests itself in many ways ranging from a political statements from major anti-war organizations like United for Peace and Justice, or the hesitancy of some elements of the Santa Cruz anti-war movement to have a united demonstration last Friday against the war.

For a week and a half a small coalition of ANSWER Youth and Student, the International Socialist Organization, and elements from Students Against War worked to build a vigil calling for an immediate ceasefire. The vigil took place last Friday which involved 30 people.

There was an obvious divide that was manifested by the two groups of protestors on either side of Pacific Avenue. To be clear, I have no problem with activists deciding that they want to be on one side of the street as opposed to another, but there is disagreement. When asked to join those of us who carried signs that read “End Israeli apartheid”, and the like, there were murmurs amongst the crowd about our ‘extremism’.

It must be said that a handful of members from Women in Black did join our side to sing a song of Peace, however such a simple demand, in my opinion, does not adequately address the political situation (more on this later).

Our movement will always have disagreements and I welcome open debate, but our side necessitates unity in action. If our numbers are to be separated by a street it should be because we want to take up more visibility and not because of political disagreements that lie below the surface. I think it is damaging to refuse to form ranks with other elements of the movement because it may seem too ‘extreme’ in its message, just like it is wrong separate from people because one disagrees with their Pacifism.

Defense of the ‘Extreme’ Position

Is calling for an “End [to] Israeli Apartheid” or “Shame on Israel/U.S.” to extreme a message to send to members of the Santa Cruz community by the anti-war movement? Is “Peace Now” an effective demand for the current political situation in the Middle East?

The slogans put forth by the more radical elements in Friday’s demonstration come from a political understanding that the war between Israel/U.S. and Palestine/Lebanon is not a war of equals. Calling for a blanket demand of Peace is not adequate enough to end the violence because if the war is ended now one side will most definitely lose, and that is Israel. Nobody understands this better than the hundred or so Pro-Israel demonstrators who showed up on Friday. That’s why when we chanted “Ceasefire Now” they chanted “Keep the bombs dropping” or something of that nature.

When asked what our stance is regarding Hezbollah and Hamas in the current conflict, and responding with ‘both sides need to drop their guns’ does incredible injustice to the Palestinian and Lebanese people. It is impossible for the Lebanese and Palestinians to put down their guns, slingshots, and occasional rockets as long as Israel drops bombs on their communities, assassinates their political leaders, drives tanks across their borders, occupies their territory, controls their water, their airspace, and their liberty.

Israel will not restrain itself from its overall project of colonizing what remains of Palestine and guarding Western Imperial interests in the Arab world. They will not cease unless they are stopped and that is why Hezbollah is a legitimate organization of National Liberation. That is why Hamas is legitimate to the Palestinian people. Both organizations are fighting for an end to the imperialist aggressions of the racist apartheid state of Israel.

We should support resistance to oppression unconditionally, but critically. Our position must be clear that an oppressed nation is entitled to self-determination no matter how undemocratic or nasty its leadership or ruling class is--be they nationalist, fundamentalist, dictators, or democrats. And the essential reason why is this: domination or oppression from the outside by a foreign imperialist power tends to overpower the struggle for democracy within the indigenous society--and therefore domination by a foreign power tends to distort, dampen or even moderate precisely those social antagonisms which bear the potential for democratic impulses. A people who do not enjoy national freedom will tend to pay primary attention to that immediate source of their pain—the foreign oppression, in this case Israel; and their perception of who-is-the-enemy and their capacity to struggle will tend to be dominated by it. National liberation will actually accelerate and give rise to the conditions in which social antagonisms and the flourishing of democratic organizations can later thrive and flourish. Those who wish to see "purity" within the movements for national liberation today, will never live to see a world free of imperial aggression.

Again, there will always be disagreements amongst those in the anti-war movement, but such disagreements must be addressed openly in critical debate. On Thursday, there will be a teach-in about the war against Gaza and Lebanon at 7PM at the Louden Nelson Community Center, Room 5. No matter what position one takes Hezbollah or Hamas, anyone who wants immediate ceasefire needs to come, not only to get facts about the conflict but engage in the debates regarding how to address the question of resistance. I welcome any member of Women In Black or the Resource Center for Non-Violence to participate and speak on our panel Thursday night.

The sooner we address these difficult questions the sooner more people will have the confidence to stand up and get involved to end war in the Middle East.

Alessandro Tinonga is a student of UC Santa Cruz, active member of the Santa Cruz branch of the International Socialist Organization, and part of the newly forming Santa Cruz Anti-Imperialist League.