by Mike Rhodes (MikeRhodes [at] Comcast.net)
Community activists, most of them connected with the National Action Network, helped the homeless clean up their encampment today. This clean up, which treated the homeless with dignity and respect, was in sharp contrast with recent attacks on this encampment carried out by the Fresno Police Department. 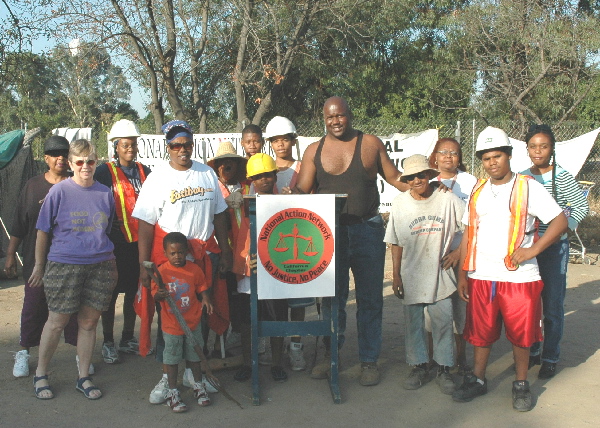 The strip of land on E street and Ventura, which has been the primary battle zone in the City of Fresno’s effort to get rid of the homeless, was well cared for today. The National Action Network organized a clean up that was an example of how to treat the homeless with dignity and respect. Instead of invading the land like the Fresno Police Department does and destroying the homeless peoples few possessions, the Rev. Floyd Harris and his crew first sat down and talked to the residents in the encampment. He explained that they were there to remove the trash that had accumulated and encouraged them to help. Supporters passed out bottles of water.

The crew of about 15 people that Rev. Harris had brought first removed the overgrown weeds. Before long, several of the homeless picked up rakes and shovels and started moving the trash to the side of the road where it could be picked up with the bulldozer. Several community activists joined the work, including Jean Chip from the Sleeping Bag Project, Gloria Hernandez from No Nos Vamos, and Ed Castro. Jean distributed a number of blankets to the homeless to replace the ones destroyed by the FPD and the Sanitation Department in previous raids.

During the clean up I spoke with Bernard, a homeless African American man who was sitting and watching the work from his car on the East side of E street. He asked "why can’t the City of Fresno do this? Why do they have to come out here and destroy our homes? 90% of the problems would be solved if they (the City of Fresno) would just bring out some dumpsters and portable toilets. Why do the police have to come out here and destroy the few things we have?"

For background about the recent attacks on the homeless in this area, see:

The clean up of this strip of land was well received by the residents of the homeless encampment and Rev. Harris plans to be back soon with some trash cans. He says he would like to return every week to empty the trash and to do a major clean up about every six weeks.

A half dozen activists from Food Not Bombs came toward the end of the clean up and distributed sandwiches. One homeless person told me, "you don’t get this kind of food at the Poverello House." He took two sandwiches. The Poverello House is a nonprofit agency that provides food and other services for the homeless. They are located about ½ block from where the clean up was taking place.

Rev. Harris said he is organizing a major event in Fresno to support the homeless on October 22. Details will be forthcoming shortly.

END_OF_DOCUMENT_TOKEN_TO_BE_REPLACED
§The Clean Up Begins
by Mike Rhodes 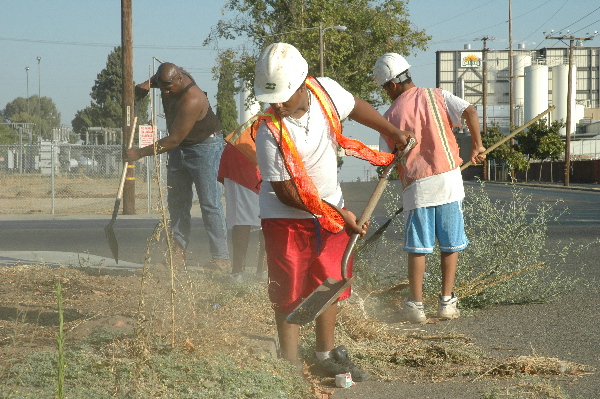 The first thing the clean up crew did was to clear out the weeds. All photos by Mike Rhodes
§National Action Network
by Mike Rhodes 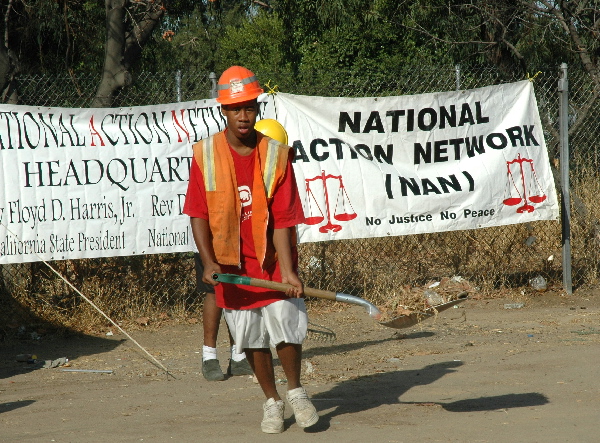 The National Action Network organized this clean up at E and Ventura streets in downtown Fresno.

§Trash is Put on the Curb
by Mike Rhodes 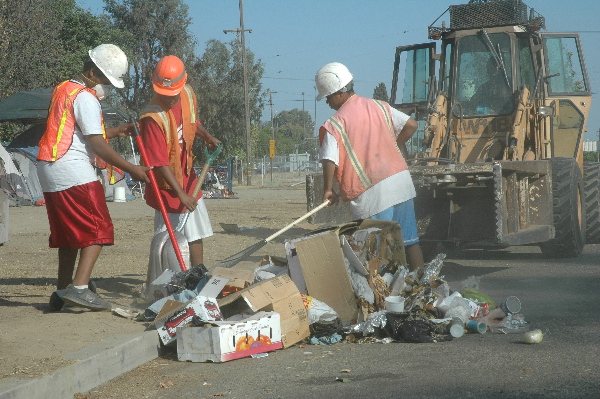 The clean up crew moved everything to the side of the road so the bulldozer could come in and pick it up.
§The Homeless Help
by Mike Rhodes 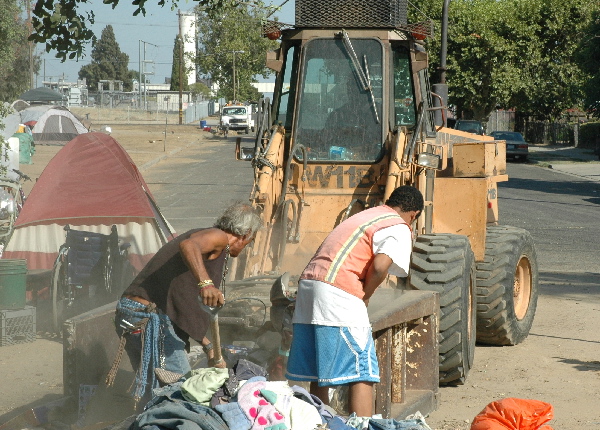 The clean up was a joint effort, with many of the homeless helping with the work.
§The Trailer
by Mike Rhodes 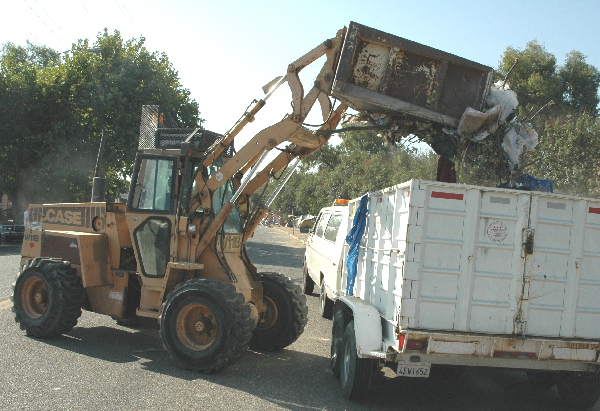 Rev. Harris operated the bulldozer that put the trash in the trailer.
§Sweeping the Street Clean
by Mike Rhodes 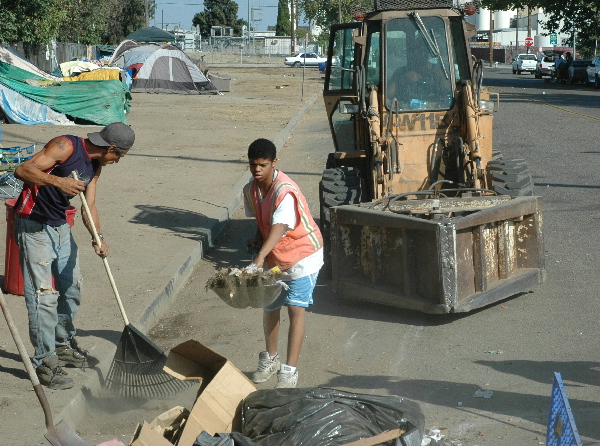 §Food Not Bombs
by Mike Rhodes 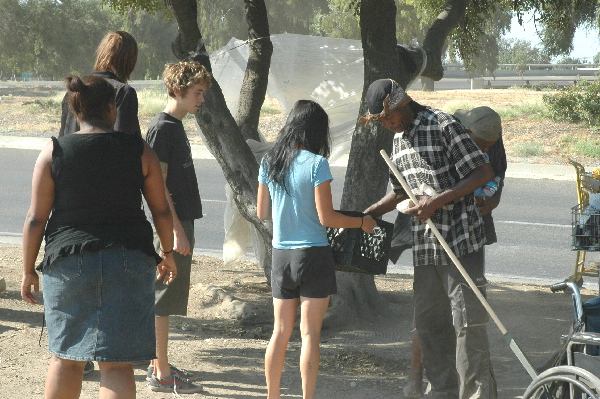 Food Not Bombs came out to distribute sandwiches. One homeless person told me, “you don’t get this kind of food at the Poverello House.” He took two sandwiches.
Add Your Comments
Comments (Hide Comments)
§Gail Gaston
by gail Gaston (GDEMVOTe)
Pastor Harris has done a great job. He has a loving and caring spirit for Fresno and the people he helps.
Also Mike Rhoades is doing a great job by keeping us all informed on the issues.
Thankyou for your commitment to a better Fresno .
Gail Gaston
Add a Comment
Support Independent Media
We are 100% volunteer and depend on your participation to sustain our efforts!