Add an Event
Newswire
Calendar
Features
Home
Donate
From the Open-Publishing Calendar
From the Open-Publishing Newswire
Indybay Feature
Publish to Newswire
Add an Event
Related Categories: Palestine | Santa Cruz Indymedia | Anti-War
Stop Funding Israeli War and Occupation in Palestine and Lebanon (8/4)
by ~Bradley (bradley [at] riseup.net)
Wednesday Aug 2nd, 2006 7:58 PM
On August 4th, advocates of peace and justice will gather in downtown Santa Cruz to denounce Israeli attacks on Lebanon and Palestine. On August 2nd, David called Free Radio Santa Cruz and got on the air to spread the word about the demonstration. (4:39 minutes)
Listen now:
Copy the code below to embed this audio into a web page:
Download Audio (2.1MB) | Embed Audio
Shame on Israel! Stop the bombing!
http://www.indybay.org/newsitems/2006/07/26/18291658.php

Santa Cruz, CA- On Friday, August 4th 5-6pm -
Advocates of peace and justice will gather across the
street from the clocktower in downtown Santa Cruz
(Front/Pacific) to denounce Israeli attacks on Lebanon
and Palestine. After weeks of bombing Lebanese cities
and Palestinian refugee camps, the results are
hundreds of dead civilians, thousands of refugees, and
the destruction of the cultured, democratic Lebanese
nation. Despite international outcry, Israel, in
cahoots with the United States continues to massacre
civilians through the use of banned chemical weapons
such as white phosphorous and conventional weapons
such as cluster bombs.

The disproportionate use of violence by the Israeli
government against the civilian populations of
Palestine and Lebanon in light of 3 Israeli soldiers
being captured cannot be justified in any moral or
military terms. Indeed, as reported on Democracy Now,
the invasion of Lebanon was planned months ago in
order to destroy Hezbollah's military capabilities.
And while the corporate media has portrayed the
capture of 3 Israeli soldiers as the catalyst for the
bombing, it must be remembered that Israel is holding
many thousands (estimates are 5,000-10,000) of
Palestinians and Lebanese without charge and has
repeatedly attacked Arab civilians.

We call on everyone who believes in peace to come out
and call for an immediate cease fire and Israel's
immediate withdrawal from Lebanon and Palestine.

WAR IS TERRORISM. STOP THE BOMBING!

THE FOLLOWING EVENTS ARE ALSO TAKING PLACE ON AUGUST 4th 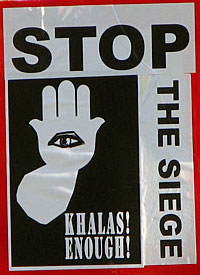 * photo by Jeff Paterson, Not in Our Name (cropped)

Hundreds rally in SF for immediate Israel ceasefire on Lebanon
http://indybay.org/newsitems/2006/08/02/18294057.php
Add Your Comments
Support Independent Media
We are 100% volunteer and depend on your participation to sustain our efforts!