Newswire
Calendar
Features
Home
Donate
From the Open-Publishing Calendar
From the Open-Publishing Newswire
Indybay Feature
Publish to Newswire
Add an Event
Related Categories: South Bay | Immigrant Rights
RAGING GRANNIES FACE MINUTEMEN as Silicon Valley protests speech by Atty General Gonzales
by Granny Ruth Robertson (info [at] RagingGrannies.com)
Thursday Jul 27th, 2006 3:01 AM
While Attorney General Alberto Gonzales addressed members of the Commonwealth Club in the ballroom of the Santa Clara (CA) Marriott, the MINUTEMEN of Arizona rented a separate conference room to take advantage of the press gathered to cover the Attorney General’s speech.
Members of the Raging Grannies Action League were stationed inside the hotel where they met up with the press, hotel security, and later, (gasp!) the Minutemen.

Raging Granny report from inside the Santa Clara Marriott, July 21, 2006:

11:00am While Gonzales addresses members of the Commonwealth Club and the Hispanic Chamber of Commerce in the ballroom of the Marriott, the MINUTEMEN including National Executive Director Al Garza are in a separate conference room. They have reserved the room to hold a press conference and take advantage of the press gathered to cover the Attorney General’s speech.
Members of the Raging Grannies Action League have stationed ourselves inside the hotel lobby and are talking to the press, including the dreaded FOX-TV. While at first we thought it prudent to keep our hats, aprons and “Raging Grannies Unite!” buttons under wraps, we clearly are falling under the radar of hotel security and Secret Service alike…so we slowly begin to bedeck ourselves in our costumes, yet still remained unchallenged.

12:05 pm Gonzales has completed his talk and the audience is leaving the ballroom. Grannies, having taken care of our trips to the Ladies’ room ahead of time in preparation for this moment, unfurl our banner at the exit from the ballroom and start chanting loudly:
“Immigrants need human rights, Grannies join them in their fight!”

12:08pm Approached by hotel security, we pretend to be dropping things and adjusting our artificial knees, some of our delaying tactics. All eyes in the lobby are upon us, our hats, and our “No Bracero Program” sign. As we are escorted from the building, the press takes a great interest in our championing the cause of immigrants’ rights. We are followed out of the building by TV News cameras and reporters from the San Jose Mercury and SF Chronicle (links to articles with photos/quotes below).

1:00pm Continuing our demonstration, join with the protestors outside the hotel.

1:10pm We go back into the hotel (sans hats) and catch up with Al Garza, National Executive Director, and other members of the Minutemen. Press has been slow for them, despite their rental of a conference room. We exchange stories about our FOX-TV interviews…clearly FOX was more interested in hearing from the Minutemen than from Grannies…in our discussion earlier this morning, the FOX reporter ranted and raved at us more than he listened.
Granny Gail Sredanovic is in a lengthy conversation with Mr. Garza, and in a case of the extreme right meeting with the left, they find some common ground. Grannies and Minutemen agree that NAFTA is to blame for a dramatic upswing in illegal immigration from Mexico. Garza has some clever talking points and says…"yes, NAFTA, CAFTA, and shaftya", agreeing with us.

(To reach Granny Gail for more about Raging Grannies meet-up with the Minutemen contact: info [at] raginggrannies.com) Continuing the story...

David Ledesma of South Bay Mobilization reported the day after the demonstration:

“The rest of us were stationed at the hotel main entrance [including Ronald Reagan Home for the Criminally Insane] street theater with hooded Abu Ghraib prisoner outfits, a sound system blaring the skit of the Abu Ghraib "Frat House" - to the soundtrack of the film Animal House.

The hotel location is isolated from the main roadway but there was increased
traffic flow as 12 noon came. We got a few honking horns and waves.

Toward the end of the protest, about 6 uniformed police took to the
intersection as though they were preparing for Gonzales' escape. As we
gathered to ensure the motorcade couldn't miss us, Gonzales was a no show.
It was a ruse. The Secret Service (SS) must have felt it was best to keep
Gonzales in his "protective bubble", not witnessing American citizens
voicing their opposition to his role in crimes against prisoners, the
American public, and Democracy.
For a short notice Friday mid-day protest I went away with a great feeling that we did what we set out to do: NOT let Gonzales' appearance in Santa Clara go unnoticed and without
protest.”

San Francisco Chronicle article with photos of Ronald Reagan Home for the Criminally Insane and other demonstrators go to:
http://www.sfgate.com/cgi-bin/article.cgi?f=/c/a/2006/07/22/BAGN1K3TPD1.DTL 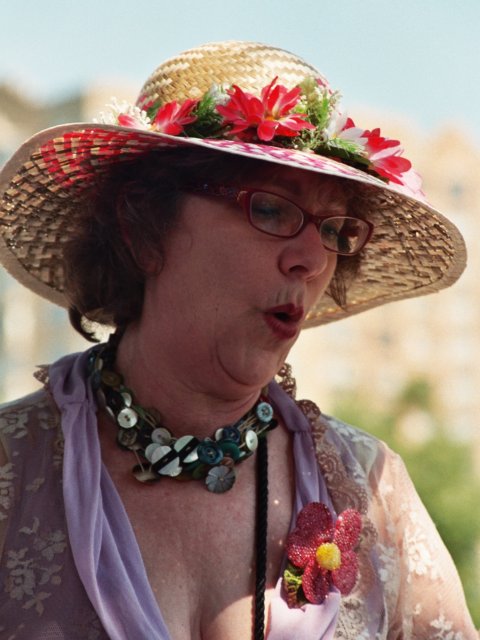 When the weather gets hot, the Grannies wear LACE...this photo by Sue Rumph. Photo of banner above by Sadie Sabot.
§Marriott Hotel Security
by Granny Ruth Robertson Thursday Jul 27th, 2006 3:01 AM 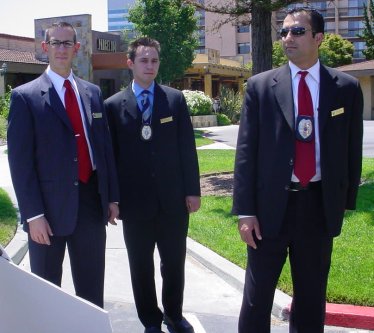 These charming fellows escorted Raging Grannies out of the Hotel. (All the while we complained about our artifical knees bothering us)
§Meanwhile outside the Marriott
by Granny Ruth Robertson Thursday Jul 27th, 2006 3:01 AM 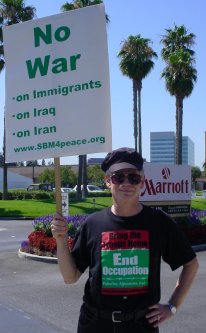 Demonstrators outside talked to press, shouted chants provided by the Grannies, and waved at passing cars
§No War on Immigrants!
by Granny Ruth Robertson Thursday Jul 27th, 2006 3:01 AM 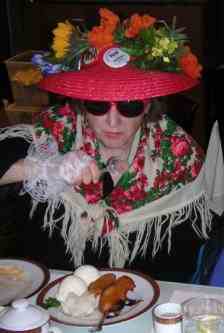 After talking with the Minutemen, exhausted Grannies retired to the hotel restaurant, but not without due caution.
Add Your Comments
LATEST COMMENTS ABOUT THIS ARTICLE
Listed below are the latest comments about this post.
These comments are submitted anonymously by website visitors.