by Flying Picket
The 60th Anniversary Celebration of the Oakland General Strike will be on Saturday, July, 22nd at 6 p.m. at the YWCA of Oakland, 1515 Webster (at 15th St.).

And the Oakland General Strike Walk will be on Sunday, July 23rd at 2 p.m. The walk will meet at Latham Square, where Broadway and Telegraph converge, where the streets of Oakland in 1946 were full with working class people singing and dancing during their “Work Holiday.” The nearest BART station is 12th St./Oakland City Center BART Station--go 1 1/2 blocks north on Broakway (the YWCA is another 1 1/2 blocks south of Latham Square, down 15th St.)

Boths event are wheelchair accessable and are free. 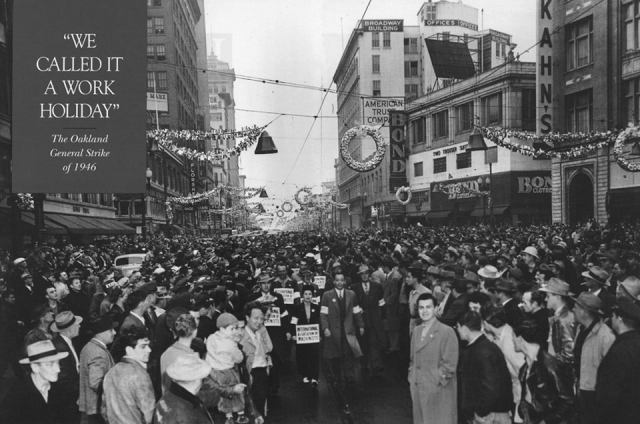 In the first week of December 1946 Oakland’s “Work Holiday” began spontaneously with rank-and-file solidarity, in support of the mostly women retail clerks striking at 2 department stores, in defiance of police scabherding. Within 24 hours it involved over 100,000 people and shut down all commerce in the East Bay for 54 hours.

Together with the Labor Studies Program at Laney College in Oakland, we invite you to a forum with Evelyn and Val Schaaf and Earl Watkins, who participated in the strike; Gifford Hartman’s multi-media presentation The Last General Strike?; the documentary Smashing the Tower: The 1946 Oakland General Strike (1996, 18 min.); Albert Lannon, author of Fight or be Slaves!: The History of the Oakland-East Bay Labor Movement and retired chair of Labor Studies at Laney, whose musical tribute to the General Strike will be performed by the Labor Heritage/Rockin' Solidarity Chorus; and the wordpower & song of Avotcja (http://www.avotcja.com).

The walk will revisit the sites that sparked the "Work Holiday" that shut the East Bay down.

The 1946 Oakland General Strike was one of the most inspiring examples of class solidarity during the fiercest episode of the class war in U. S. history. It was also the last general strike to ever occur. The Taft-Hartley Act, which outlawed the sympathy strikes that made the class struggle in those post-war years so effective, was passed 6 months after the Oakland general strike.

Bus and streetcar drivers sparked Oakland’s “Work Holiday” into action in the first week of December 1946. They refused to cross picket lines as cops were escorting scab goods into Kahn’s and Hastings where the retail clerks, mostly women, had been on strike for over a month. Within 24 hours the general strike involved over 100,000, from 142 unions. Nearly all commerce in the East Bay came to a complete halt.

This general strike was part of a strike wave that began at war’s end in 1945. There were massive strikes on the railroads, by coal miners, autoworkers, and steelworkers. The strike in the steel industry included 750,000 workers and is still the record for the single biggest strike in any industry. Strikes took place in nearly every sector, with 6 cities shut down in city-wide general strikes in 1946 (Stamford, CT; Lancaster, PA; Houston, TX; Rochester, NY; Pittsburg, PA; and Oakland). By the end of 1946, there had been 4,985 strikes, involving 4.6 million workers. One hundred sixteen million “man-days” were lost due to industrial work stoppage. This period was the closest the U.S. has ever come to a nationwide general strike, and these strike figures are still all time records for the U.S.

By celebrating this event, we hope to keep alive the tradition of community-wide working class solidarity. That way, the 1946 Oakland General Strike will not have been the last to occur, but the inspiration for the next, and the one after that… as we rediscover class consciousness and the power of solidarity.


END_OF_DOCUMENT_TOKEN_TO_BE_REPLACED
Add Your Comments
Latest Comments
Listed below are the latest comments about this post.
These comments are submitted anonymously by website visitors.
TITLE
AUTHOR
DATE
Dear Master
Spot
The last hurrah of the classical workers movement in Oaktown
Kevin Keating
Support Independent Media
We are 100% volunteer and depend on your participation to sustain our efforts!