Add an Event
Newswire
Calendar
Features
Home
Donate
From the Open-Publishing Calendar
From the Open-Publishing Newswire
Indybay Feature
Publish to Newswire
Add an Event
Related Categories: Palestine | San Francisco
Bay Area Jews Call For an End to Israel's Seige of Gaza (1 of 2 posts)
by sadie sabot
Monday Jul 17th, 2006 10:29 PM
Over four hundred people rallied in front of the Israeli consulate in San Francisco in response to a call for US Jews to speak out against the Siege of Gaza and the bombing of Lebanon. 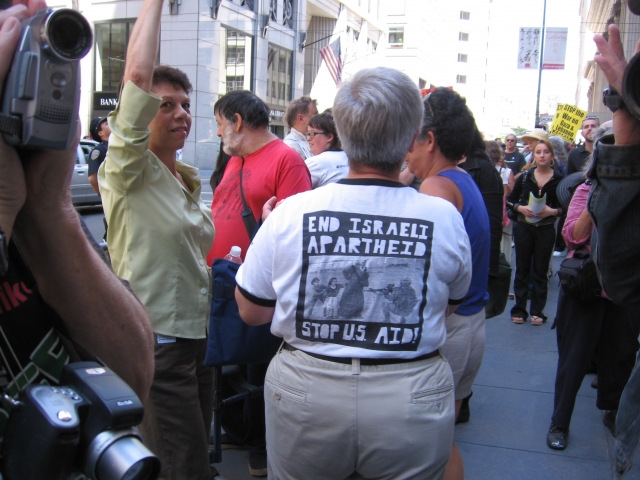 original image (2272x1704)
Over four hundred people rallied in front of the Israeli consulate in San Francisco in response to a call for Jewish voices to speak out against the Siege of Gaza and the bombing of Lebanon. The demonstration was called by Break the Silence, Jewish Voice for Peace, and Jews for a Free Palestine (see their call to action below) and in spite of taking place on a weekday, drew one of the biggest crowds in front of the consulate since the recent crisis and escalation by Israel.

After a rousing and short program including speakers from Break the Silence and Amir Terkel, an Israeli Refusenik (Refuseniks are Israeli soldiers and reservists who refuse to serve in the Occupied Territories, in protest against Israel's actions in the West Bank and in Gaza), over a dozen Jewish activists took to the street and blocked Montgomery Street in solidarity with the people of Palestine and to call for an and to the siege of Gaza, to the bombing of Lebanon, and to the occupation of Palestine.

After successfully shutting down Montgomery Street in front of the Israeli Consulate for over an hour, they were all arrested. (they were all charged with infractions and released).

A CALL BY BAY AREA JEWS: Break the Siege on Gaza

BEFORE OUR EYES, the people of Gaza are being brutally and collectively punished by Israel. Israel is using a single captured Israeli soldier as a pawn to employ its enormous military might and terrorize an entire people.

The humanitarian situation in Gaza, already dire from 39 years of occupation, and a recent Israeli blockade of basic supplies, is now desperate. Israel’s bombing of power stations and bridges and cutting off fuel supplies in Gaza deprives people of electricity, refrigeration, pumped drinking water, and sewage disposal. The relentless and deadly attacks by the Israeli military are compounded by the threat of epidemics and starvation.

Presenting this as an isolated hostage-taking incident ignores Israel's regular abduction of Palestinians from their homes. Israel holds over 9,000 Palestinians in prison, including almost 400 children. Thousands of these prisoners are held in "administrative detention" without charges or trial. They too need to be returned to their families.

As Jews, we cannot and will not remain observers of crimes committed in our name. We call on other Jews and all people who believe in justice and peace to take a principled stand against this brutality. 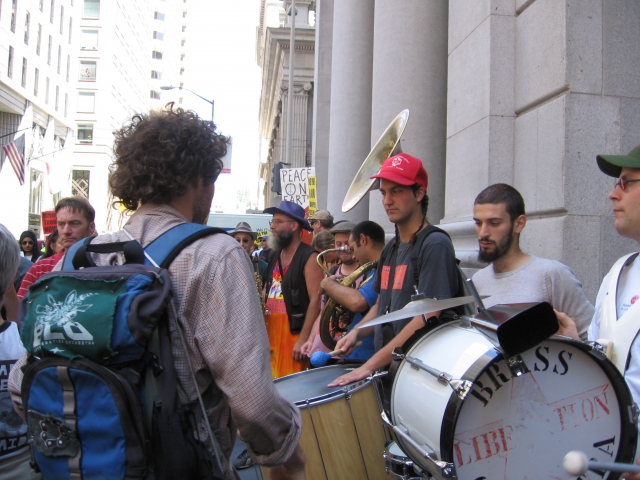 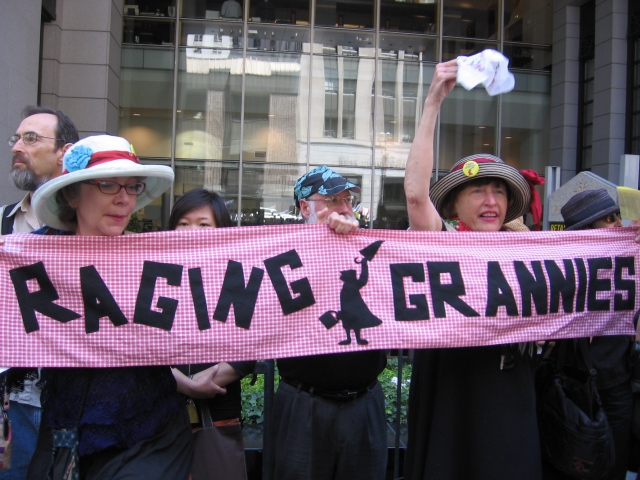 original image (2272x1704)
the raging grannies were on hand, singing and looking fabulous 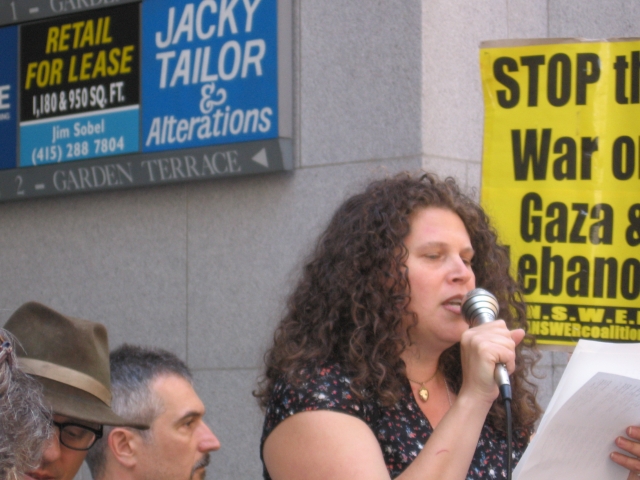 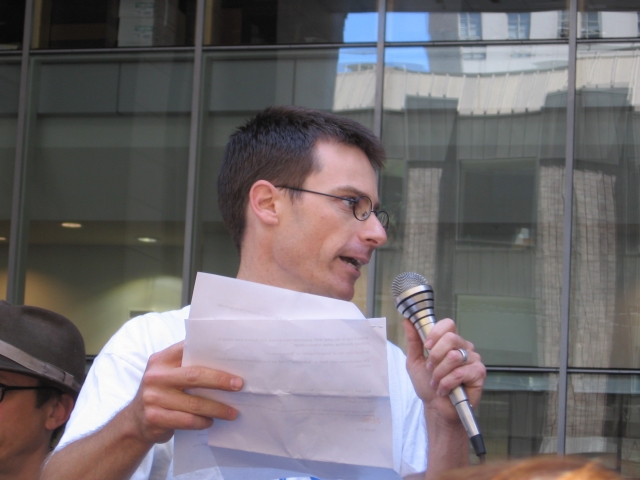 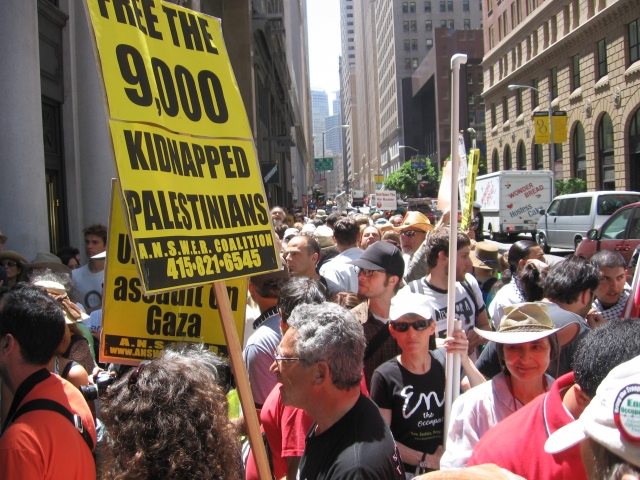 original image (2272x1704)
The sidewalk in front of the Israeli consulate was packed with people listening to the speakers.
§Dr. Susan Green of BTS
by sadie sabot Monday Jul 17th, 2006 10:29 PM 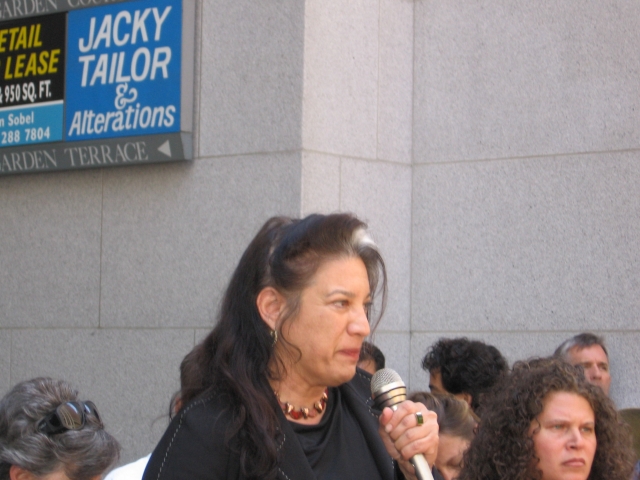 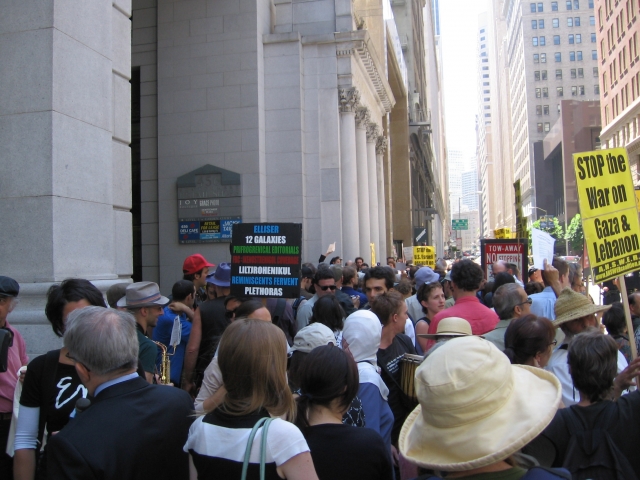 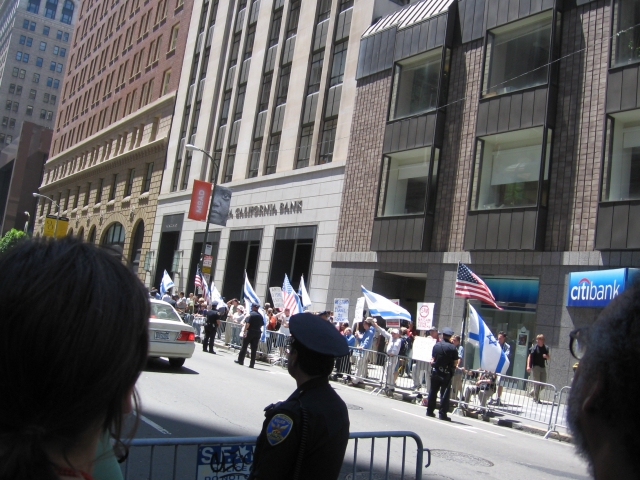 original image (2272x1704)
although the pro-israel crowd pulled out all the stops to get theri people out to this demonstration, they had a minimal prescence, dwarfed by the bay area jews who stand for justice.
§stop killing civilians
by sadie sabot Monday Jul 17th, 2006 10:29 PM 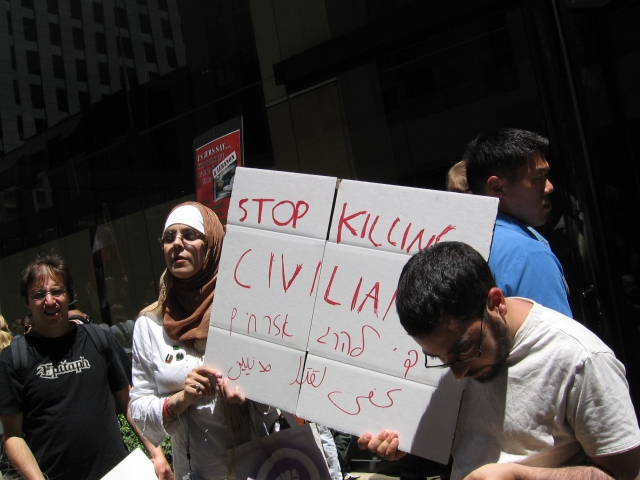 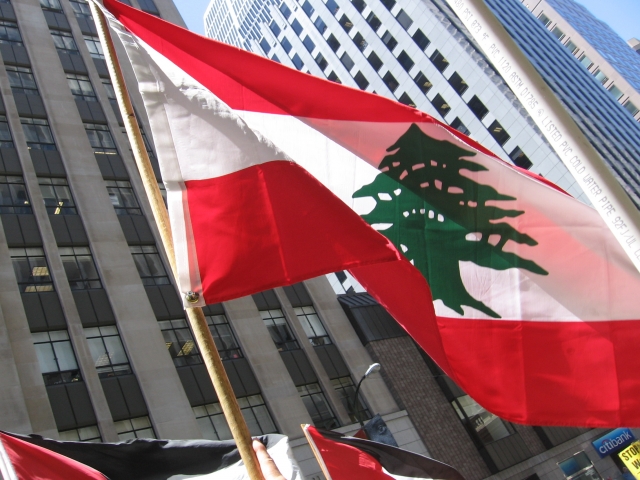 original image (2272x1704)
although today's demonstration was ntitially caled to demand an end to the siege of Gaza, when Israel attacked Lebanon the call was expanded to call on Israel to end the Seige of Gaza AND to stop bombing Lebanon.
§the crowd
by sadie sabot Monday Jul 17th, 2006 10:29 PM 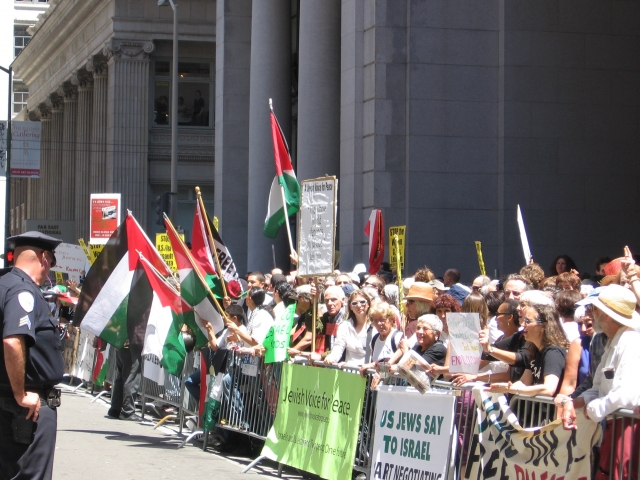 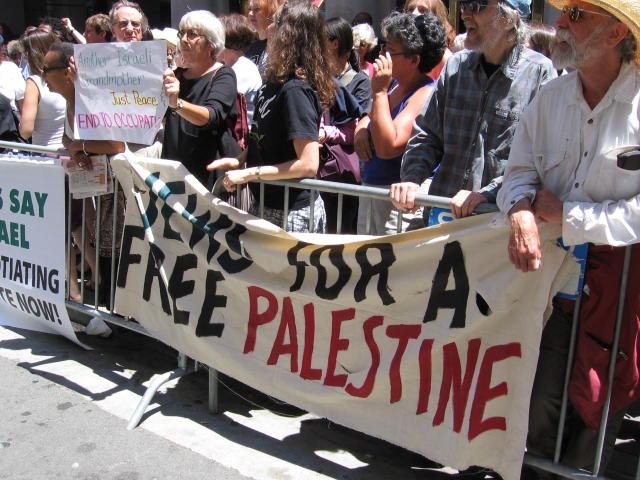 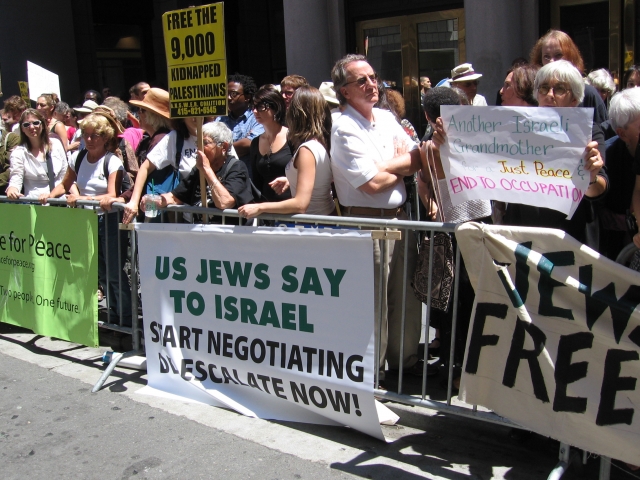 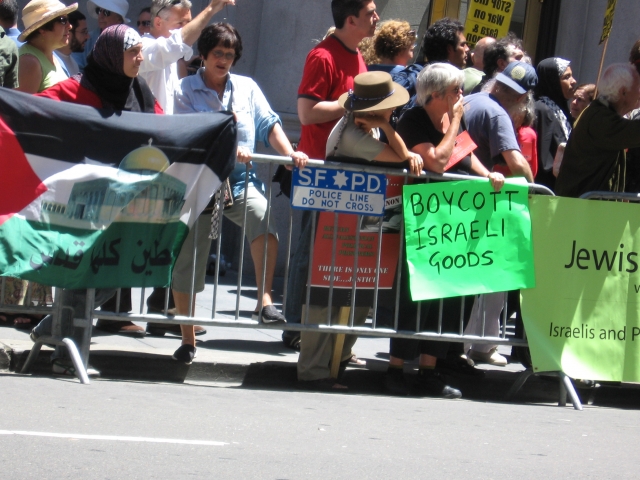 original image (2272x1704)
For a list of Israeli products to boycott, see : http://www.boycottisraeligoods.org/modules11748.php
Add Your Comments
LATEST COMMENTS ABOUT THIS ARTICLE
Listed below are the latest comments about this post.
These comments are submitted anonymously by website visitors.