Add an Event
Newswire
Calendar
Features
Home
Donate
From the Open-Publishing Calendar
From the Open-Publishing Newswire
Indybay Feature
Publish to Newswire
Add an Event
Related Categories: U.S. | Anti-War
John Rendon Rendered Speechless- Not Buying War Lies in SF
by Carol Brouillet
Saturday Jul 15th, 2006 12:09 PM
John Rendon who received millions to sell war to the American people for over twenty years was invited to speak in San Francisco July 14, 2006 and grilled by those who haven't bought his "War on Terrorism"

original image (720x288)
I was shocked to hear that John Rendon was an invited speaker. I made up a flyer to pass out at the evening's event. Here is the text:

Excerpts from- The Man Who Sold the War
Meet John Rendon, Bush's general in the propaganda war-
By James Bamford, published in The Rolling Stone 11/17/05

Rendon is a battle-tested veteran who has been secretly involved in nearly every American shooting conflict in the past two decades.... "We've worked in ninety-one countries," he said. "Going all the way back to Panama, we've been involved in every war, with the exception of Somalia."....

In modern warfare, he believes, the outcome depends largely on the public's perception of the war -- whether it is winnable, whether it is worth the cost. "We are being haunted and stalked by the difference between perception and reality," he says. "Because the lines are divergent, this difference between perception and reality is one of the greatest strategic communications challenges of war."....

In the first weeks following the September 11th attacks, Rendon operated at a frantic pitch... “We functioned [24] hours a day. We maintained situational awareness, in military terms, on all things related to terrorism. We were doing 195 newspapers and 43 countries in fourteen or fifteen languages.”….

The Bush administration took everything Rendon had to offer. Between 2000 and 2004, Pentagon documents show, the Rendon Group received at least thirty-five contracts with the Defense Dept., worth a total of $50 mil to $100 million.
http://www.rollingstone.com/politics/story/8798997/the_man_who_sold_the_war/1

Don’t Buy the Lies! Or the War!

5th Annual Rally and March for 9-11 Truth
Saturday, September 9th, 2006
Rally 10:00 AM in San Francisco at the Panhandle
(between Oak and Fell at Ashbury),
10:30 AM March/Parade up Ashbury to Haight Street through Golden Gate Park
to Speedway Meadow (about 2 miles) to the-
8th Annual 9-11 Power to the Peaceful Concert
featuring Michael Franti & Spearhead,
www.powertothepeaceful.org
11:00 AM- 5 PM, free Concert & Social Justice Festival

On the flip side of the flier was an announcement for next Wednesday's, July 19th Impeachment Event at the Grand Lake Theater-

We arrived in San Francisco early and carried signs that said "Neo- Con Jobs- Iraq, 9/11;" we were able to flyer, and talk to people right up until the program began at 7:30 pm. Outside the theater, we encouraged people to come into the "free" event and challenge the guy who made millions selling war to the American people. Most people took the flyers and seemed very sympathetic to our point of view. I knew everyone who worked at the Herbst, including the janitors and security guards, and they were very friendly, and politely reminded me of the "rules" which we weren't violating. (I had organized many events at the Herbst- including the premiere of "Aftermath- Unanswered Questions from 9/11," "Behind Every Terrorist- There is a Bush" and "The San Francisco International Inquiry into 9/11.")

I don't think John Rendon has many actual admirers or fans in San Francisco. The turnout seemed rather small; I would have thought that there would have been more anti-war people there, except that word about the event was very last minute.

We were joined by Bernie and Dana from the Northern California 9-11 Truth Alliance. Dana was on his way to the symphony, but brought his "Stop the 9-11 Cover-Up" sign to at least express his opposition to the big lies, that Rendon sold for a living. Friends from Veteran's for Peace also helped pass out flyers. There were also a few journalists who obviously hoped that Rendon would be grilled by the questions. Brian had printed out 75 copies of the entire -
Rolling Stone article- The Man Who Sold the War
Meet John Rendon, Bush's general in the propaganda war-
by James Bamford which were especially high in demand after the program.

My friend and colleague, Patrick Reinsborough, from the Smart Meme Project was there, and I told reporters that Rendon was basically our arch-nemesis- using lies to sell war, while we gave our lives, time, and energy trying to get out the truth to further peace and justice. (Without any funding from government or corporate sources.)

Of course, simply because we are "peace" activists and believe in truth, dialogue, the power of the narrative- we were not a physical threat to Rendon. I think if Nuremberg trials were held for 9/11, he would be sentenced very harshly. I even told my kids that although I am basically non-violent, if there is anyone whom I would consider throwing a pie at- it would be Rendon. Luckily for Rendon, I didn't have time to bake a pie for him, and my family loves pie, so much, that they would never let me waste it on such a vile character. (And, heck, I've held too many events at the Herbst, to create a mess for anyone on stage.)

We had no time to plan a strategic disruption/challenge of his talk, and we got clues that the Q & A might actually permit some serious questions to be raised and put him on the spot.

Stewart Brand introduced Rendon and mentioned that five of the board members on his Long Now Foundation had worked with Rendon and that Rendon's presence always seemed to make meetings run more smoothly. It was a very friendly intro. Rendon, surprisingly, only spoke for 30 minutes maximum and then the questions and answers began.

For someone who specializes in PR, his talk was remarkably unimpressive, but he did make a few key points.

Whoever writes "the history of 9/11 and the War on Terrorism" in the next few years that gets disseminated to the current/future generations will determine how long the "War on Terror" will last.

He urged that the US follow a "soft policy" rather than a "hard policy" to win over public support in the US and abroad- earmarking more resources towards "education" and "health." (I wonder what his position is on eliminating 90% of the world's population through man-made viruses, so heartily endorsed by the mad scientists in Austin last spring (Meeting Dr. Doom.)

Then came the many questions, some excellent, many challenging the war on terrorism, and the events of September 11th. Brand read the questions, and acknowledged who wrote them. I believe he even read mine in its entirety which went something like this-

Brand bundled the question with some others and Rendon had greater and greater difficulty in responding.

He refused to answer questions about Chalabi, and on one side of his mouth he said that his firm only gave out "truthful, accurate, information" and from the other side of his mouth that his work was "classified" and he could not "compromise his oath" and talk about anything regarded as secret.

His worst moment was when asked about the agenda behind the War on Terrorism which he has been paid between 50-100 million dollars to sell to the American people- he could give absolutely no reason for it- except that soldiers had been convinced that there was a reason to die for (most of them have been sold on Fox News lies that Hussein did 9-11).

There was a bit of heckling and comments, questions, noise directly from the audience, when Brand was too soft on him.

I was sitting in the middle of the second row and when they utterly faltered on stage about 9/11, I felt compelled to clarify reality for them and yelled-

Brand and Rendon looked extremely distressed by my outburst and tried to change the subject as soon as possible.

Apparently, the numbers in the audience were not nearly as important to them as to the numbers of people the event would reach via the internet, the whole thing- video and audio will be available online.

When it comes to facts and spin, it does seem pretty obvious that the US Government, Rendon, the transnational elite, have already lost the war for public opinion. Almost every move that they make worsens the situation for the planet's inhabitants and destroys whatever husks of legitimacy/credibility that they cling to, with the help of a bought off press. I wonder if Rumsfeld will bring down the internet, try to cut off "global communications" because the irrepressible discourse between people noting reality and ripping apart the government lies, propaganda, spin are such a powerful threat to them. (Pentagon document outlines plan to take down global communications)

Brand at least hinted that those in power were nuts and might have deceived themselves with their own propaganda, and queried Rendon on how dissenting views of reality might pierce through the powerholders psychological barriers. Rendon hinted that they weren't open to threats upon their "self delusion/officially approved worldview/description of the world that they were trying to force on the rest of the world."

Oddly enough, Rendon said he was an optimist and that he could imagine world peace. I rather doubt, though, that I would buy his "peace" anymore than I am buying the wars which he has been promoting these past twenty years. 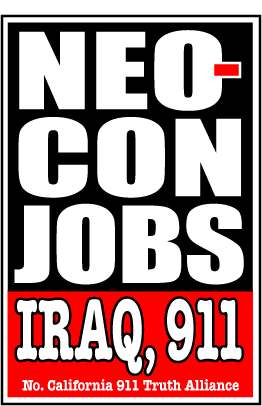 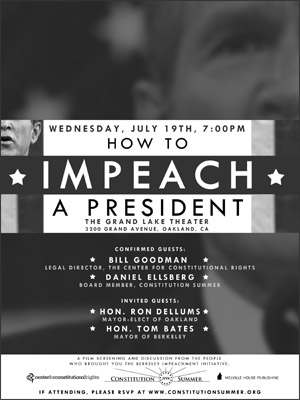 Flyer for the Impeachment event at the Grand Lake Theater, July 19, 2006. Free, but you are requested to RSVP at http://www.constitutionsummer.org
Add Your Comments
Support Independent Media
We are 100% volunteer and depend on your participation to sustain our efforts!