US vetoes Security Council resolution on violence in Gaza 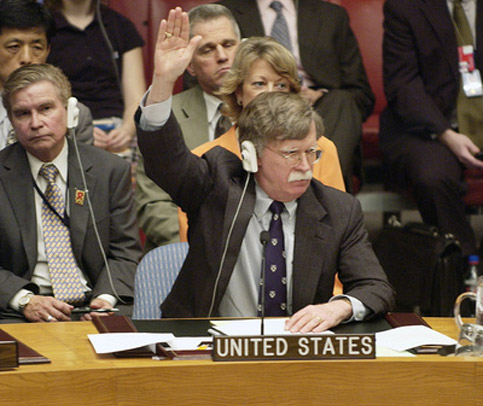 John R. Bolton, Permanent Representative of the United States to the United Nations, vetoes the draft resolution calling on Israel to halt its military incursion in the Gaza Strip. Ten of the 15 Security Council nations voted in favor, while Denmark, Peru, Slovakia and the United Kingdom abstained. (UN Photo/Marie Gandois)
--

The United Nations Security Council failed today to adopt a draft resolution calling for the immediate and unconditional release of the Israeli soldier abducted by Palestinian armed groups from Gaza and for a halt to what it called a “disproportionate” military reaction by Israel, due to a veto by the United States, which called the text unbalanced and outdated.

Denmark, Peru, Slovakia and United Kingdom abstained from voting on the draft, which also called for the release of all Palestinian officials detained by Israel and called on the Palestinian Authority to take “immediate and sustained” action to bring and end the firing of rockets from Gaza into Israel.

The text would have explicitly condemned Israel’s current “military assault” in Gaza, which, it said, “has caused the killing and injury of dozens of Palestinian civilians” and destroyed Gaza’s main power station.

In addition, the draft called on the international community to provide emergency assistance to the Palestinian people to help alleviate the dire humanitarian situation, and on the Israeli Government to restore and maintain the continuous and uninterrupted supply of fuel to Gaza, and to “act expeditiously” to replace destroyed equipment at the power plant.

Explaining Washington’s negative vote, Ambassador John Bolton of the United States said the text did not reflect important new developments, including the fact that the Secretary-General is sending a team to the region.

More
http://electronicintifada.net/v2/article4983.shtml
Add Your Comments
Latest Comments
Listed below are the latest comments about this post.
These comments are submitted anonymously by website visitors.
TITLE
AUTHOR
DATE
U.S. vetoes UN resolution condemning Israel's Gaza incursion
Haaretz (reposted)
US vetoes UN resolution on Gaza
ALJ
Support Independent Media
We are 100% volunteer and depend on your participation to sustain our efforts!