Working Within the System is Not Working

by ~Bradley (bradley [at] riseup.net)
On July 5th, Santa Cruz activists protested against the city's failure to resolve the Santa Cruz Police Department spying scandal. Instead of taking steps to protect civil rights, the Santa Cruz City Council and SCPD have worked together to approve policies filled with blatant first amendment violations. The SCPD have not only been cleared of spying on Last Night Santa Cruz meetings, but now have explicit permission to videotape you inside or outside of your home, audio record you, listen to your phone calls, look at the mail you are receiving, read your email, make notes about your organization, tail you, monitor your website, subscribe to your email lists, and examine your membership lists. 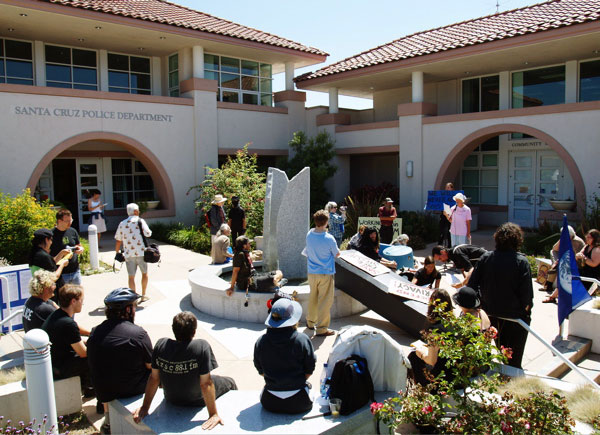 'Just Us' is an anti police infiltration alliance and lobbying group which has been working to protect first amendment rights specifically for Santa Cruz residents. Members of 'Just Us' held a press conference in the plaza outside the Santa Cruz Police Department to speak out against police spying on local groups and activities. Even though 'Just Us' has been working with the City Council on fair legislation, the City Council decided to ignore all recommendations from 'Just Us' and the Northern California ACLU. 'Just Us' found out the new policy was going in effect on July 5th from the Northern California ACLU, not the Santa Cruz City Council who was supposedly working with 'Just Us' to create a fair policy to prevent more constitutional violations by the SCPD.

Following the press conference, people took to the streets to bring attention to the new SCPD policy on spying. Informational flyers were given to people who were standing outside their home, driving their cars or walking downtown. The marchers went from the police station on Center Street to the Farmers Market on Cedar Street, then up Pacific Avenue and eventually over to City Hall on Church Street.

At City Hall, 'Just Us' activists, again, tried to schedule a meeting with someone in city government. They also attempted to deliver a coffin with the words "Right to Privacy" and "Freedom of Assembly" to City Manager Dick Wilson. The city clerk said she would not sign for the coffin unless it was outside. It was brought outside, but she still would not sign for it and bring it in for Dick Wilson. Therefore, activists decided to bring the coffin back into the City Hall office and leave it on the floor.

For much more information about the Santa Cruz Police Department spying scandal, see: 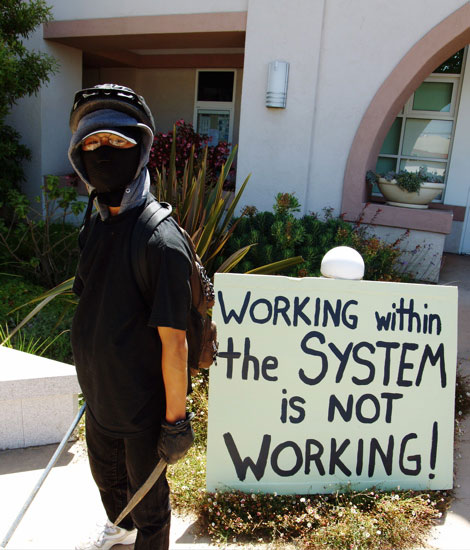 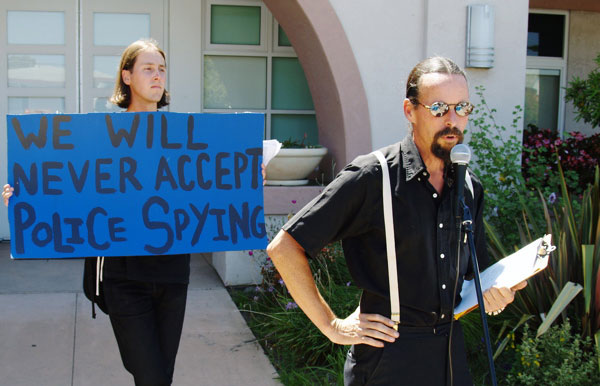 §Waving to Police as they Monitor from Above
by ~Bradley 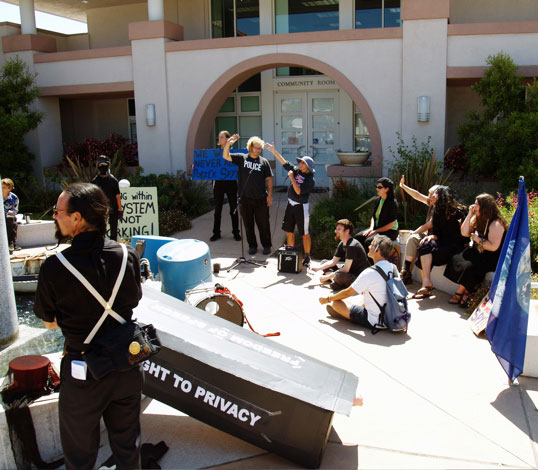 §Beat the System
by ~Bradley 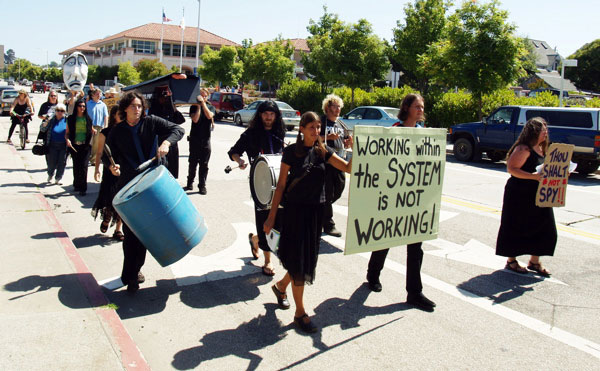 §We Will Never Accept Police Spying
by ~Bradley 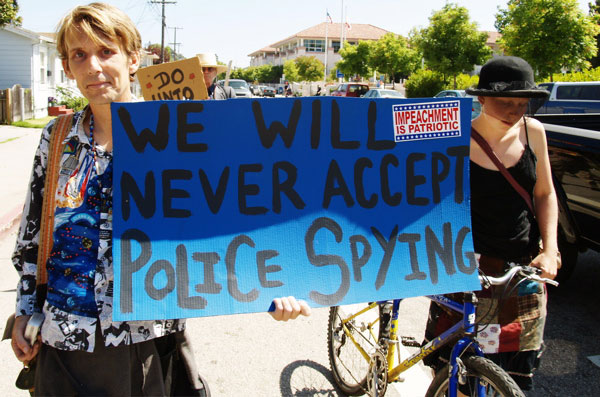 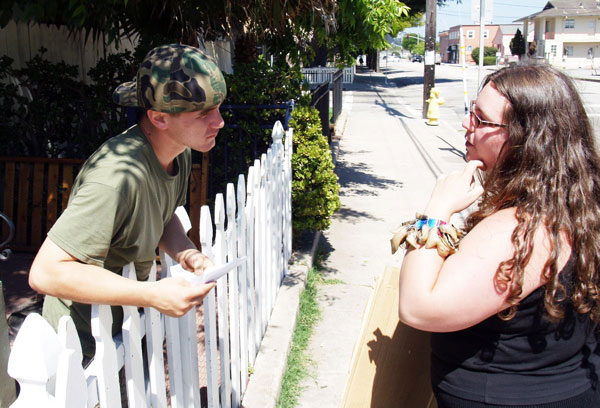 §Thou Shalt Not Spy
by ~Bradley 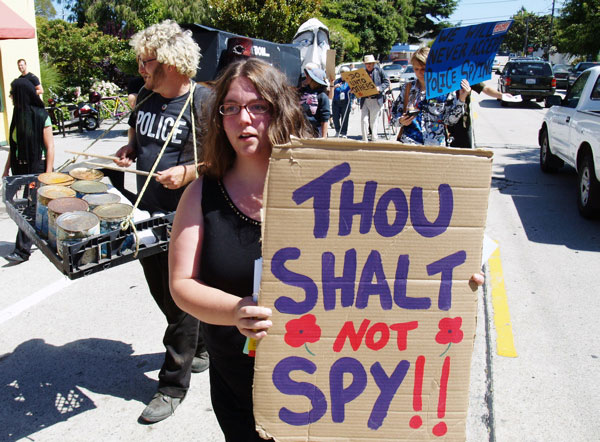 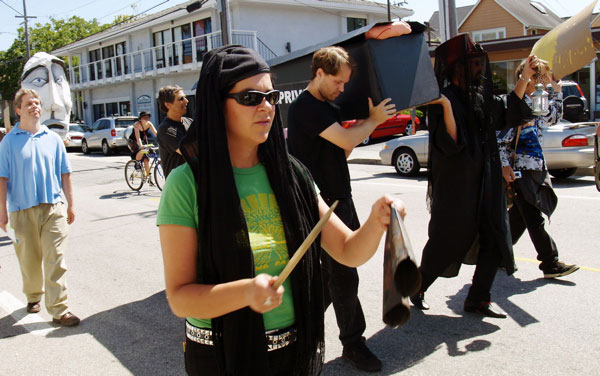 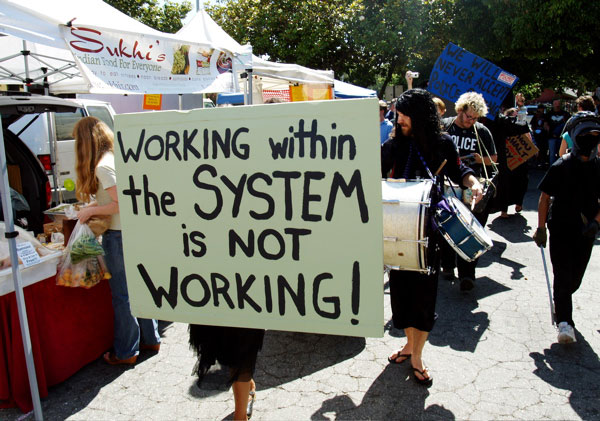 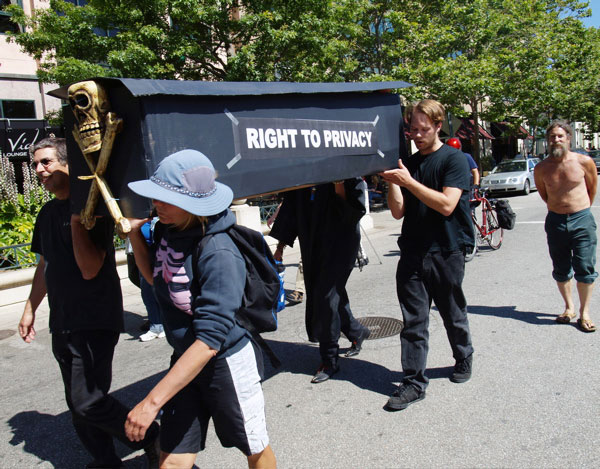 §Requesting Another Meeting
by ~Bradley 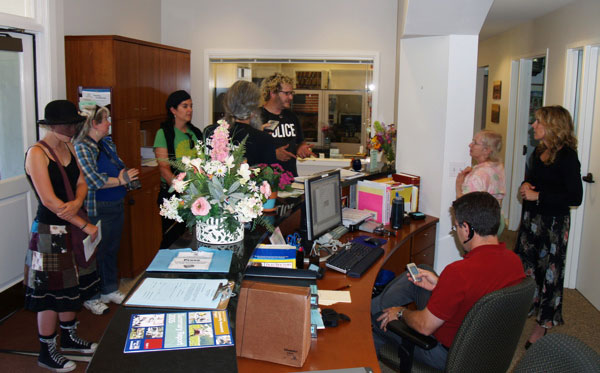 §Working Within the System is Not Working
by ~Bradley 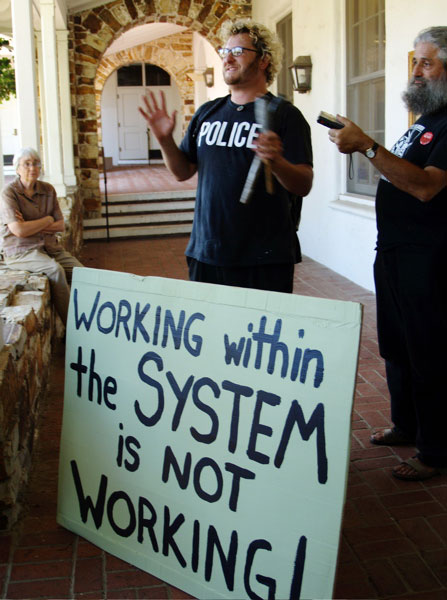 §Attempted Delivery of the Coffin
by ~Bradley 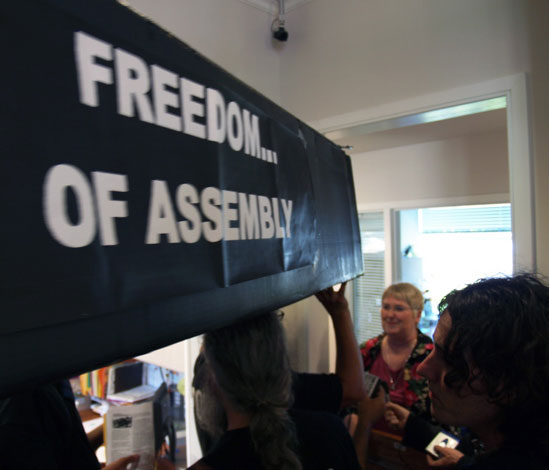 §"Right to Privacy" and "Freedom of Assembly" Coffin Delivered
by ~Bradley 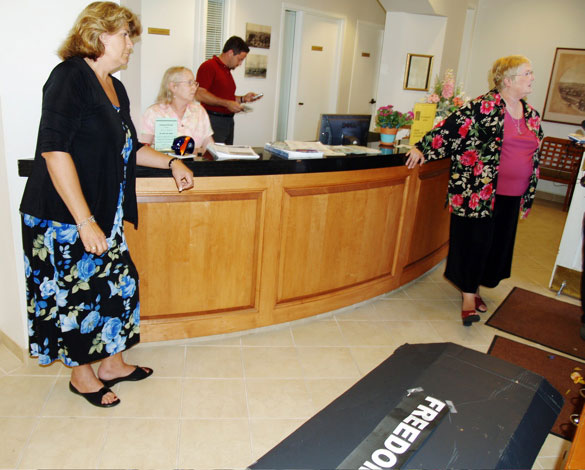 Add Your Comments
Latest Comments
Listed below are the latest comments about this post.
These comments are submitted anonymously by website visitors.
TITLE
AUTHOR
DATE
Nope...
n5667
Case law
Rico
a steaming pile of police suspicions
Rico
Because
n5667
You might be able to, but cops can't
Rico
I can do all that too
n5667
point taken, "implicit" not "explicit"
~Bradley
A word of clarification: police spying legality
Rico
I Refuse to Ask Permission to Be Free
Handbill from Parade
Let's Talk About Direct Action
Rico
Support Independent Media
We are 100% volunteer and depend on your participation to sustain our efforts!