by Mike Rhodes (MikeRhodes [at] Comcast.net)
The Fresno Police Department, having apparently solved all other crime in Fresno, sent a task force to a homeless encampment and stole their shopping carts this morning. 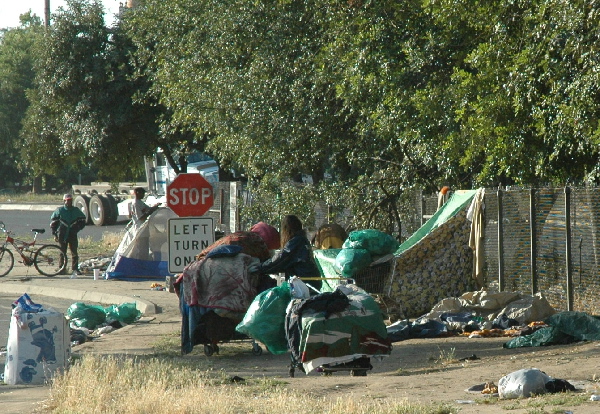 The Fresno Police Department (FPD) continued their attack on the homeless in downtown Fresno this morning. Three patrol cars, a paddy wagon, a squad of officers, and a City owned flat bed truck arrived just after dawn today to raid the homeless encampment on E street, just South of Ventura. According to several eyewitness accounts, the police were there to seize shopping carts, used by the homeless. The homeless use the shopping carts to store and move their possessions from one location to another. Unlike previous raids, the homeless were given no notice that this FPD led operation was about to take place. The strip of property occupied by the homeless is public land owned by Caltrans (Department of Transportation). A little over a week ago the FPD was involved in an operation that resulted in the destruction of numerous shopping carts, filled with the property of the homeless.

Ellen (not her real name) told me that a raid like what happened this morning has never happened before. She said “a lot of these carts were old and could no longer be used by grocery stores. People give us these carts or we find them abandon on the side of the road. The police did not ask us if these were our carts or not, they just took them.” Ellen said that on several occasions people from churches or other groups have come by and dropped off carts that are no longer being used by grocery stores. She said that some of the carts may have belonged to grocery stores but that the police did not ask about ownership. “They just came out here, took my cart, and dumped all of my stuff on the ground. That is just not right,” Ellen said.

The police took the name of each person in possession of a cart and, according to Ellen, told them that if they were found with a cart again they would be cited for theft. The police then turned each cart over, dumping the homeless peoples possessions on the dirt. They loaded the shopping carts onto a flatbed truck and hauled them away. “Now they are going to come back, like they do every couple of weeks, and throw all of our things in a garbage truck. Without shopping carts we have no way of removing our stuff when they come.” For background information about the frequent attacks on the homeless in Fresno see:

Ellen said this was the first time she is aware that the FPD has come and taken the shopping carts. She said “someone working for the grocery stores has come by before and collected the carts. But, they did not come with the police.”

Why are the police taking an increasingly aggressive role in harassing the homeless? In an earlier inquiry to the FPD, they claimed they were only playing a supportive role in helping Caltrans, who owns the property, clean up. As Chief Information Officer Jeff Cardinale said, “we are just there to keep the peace.” Cardinale claimed Caltrans had requested their assistance.

Caltrans officials say their agency has been responding to a petition from the City of Fresno on file with the Caltrans office to “clean up” this strip of land (on E street just South of Ventura). In response to a Public Records Act request Caltrans provided this Indymedia reporter with an Encroachment Permit. The Permit, which is posted below, is not from the City of Fresno and is not responsive to the request. Further Public Records Act requests are being filed to get to the bottom of who is behind these relentless attacks on the homeless.

Other homeless people I talked to said the police and city officials would like to make life so miserable for the homeless that they leave and go to another town. Some community activists think the developers who are seeking to revitalize Chinatown are behind the attacks. The theory behind that is the old adage - “Follow the Money.” Still others suggest that the attack on the homeless is part of the right wing agenda coming from City Hall or the FPD. That theory goes something like - It is kind to be cruel. In other words, by making life miserable for the homeless, you will make them want to turn their lives around and become productive citizens. It is the “Strong Father” model discussed in George Lakoff’s book, Don’t Think of and Elephant.

Indymedia will continue to follow this story and bring you the news as it develops.
END_OF_DOCUMENT_TOKEN_TO_BE_REPLACED
§Encroachment Permit
by Mike Rhodes 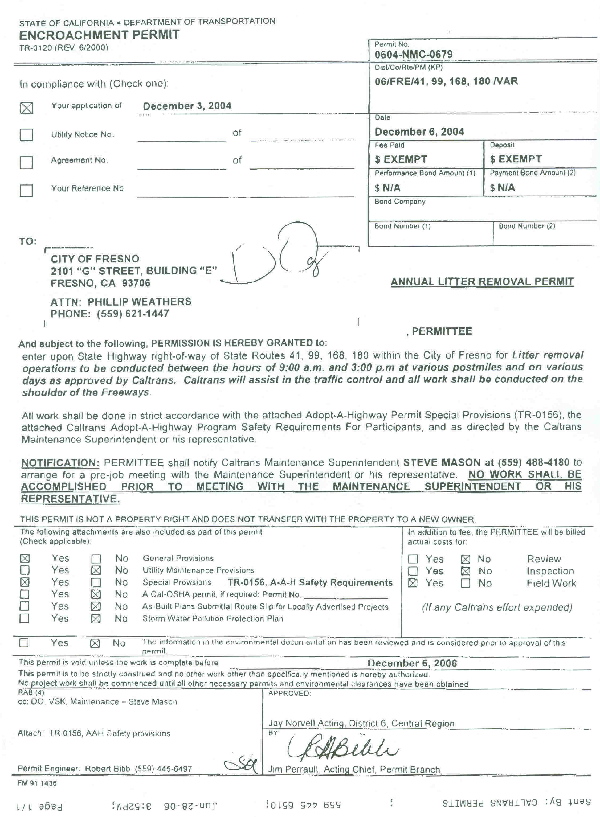 Caltrans gave me this document to justify their attack on the homeless.
Add Your Comments
Latest Comments
Listed below are the latest comments about this post.
These comments are submitted anonymously by website visitors.
TITLE
AUTHOR
DATE
Clarification on Caltrans Document
Dan
Support Independent Media
We are 100% volunteer and depend on your participation to sustain our efforts!