by Mike Rhodes (MikeRhodes [at] Comcast.net)
City of Fresno attacks on the homeless reached a new level today as a multi agency task force used new tactics in destroying their possessions. Photos, video, and story below. 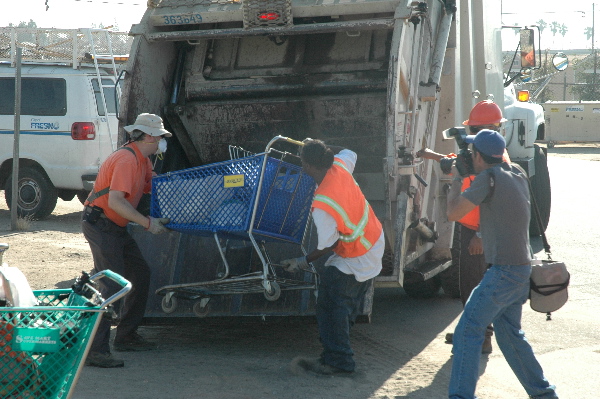 "The homeless people that live here are the luckiest homeless in Fresno." Surprised by the statement, I asked undercover Fresno Police Officer Ray Wallace what he meant. "They have maid service. We come out and clean up for them about every other week." The cleaning party today was particularly vigorous.

The letter handed out by the Fresno Police Department, giving notice of the "clean up" said they would "start at 8:00am." I arrived at 7:50 AM and the destruction of property was already well under way. One homeless woman told me that everything she owned had been destroyed because she was a few minutes too late to save it. "I had paper work in there that can’t be replaced," she said.

Once the "clean up" crew had made its way all of the way down the Caltrans property on E street (on the West side of E near Ventura) they swung around and headed down the East side of E street. This caught the homeless community completely off guard. Until today the City Sanitation Department would go down the Caltrans strip of land with a bulldozer, sweep it clean, and then leave. The homeless, every other time this had happened, simply moved their possessions to the other side of the street. After the clean up crew was gone, the homeless would move back to the East side of the street and re-build their encampment. But, today the Fresno Sanitation Department, backed up by a larger than usual Fresno Police Department contingent, made a U turn and pulled onto the East side of E street. Stunned homeless people watched as all the possessions they had removed from Caltrans property were loaded into the dump truck.

The shopping carts and piles of possessions stacked up on the sidewalk, on the East side of E street were thought to be safe because no notice had been given that there would be a change in procedures. Many of the homeless had removed their possessions as instructed and then left to eat, work, or do whatever they would normally do on a Thursday morning. As officer Wallace directed the clean up crew to throw away anything not in the possession of someone, the homeless people still in the area mobilized to save whatever they could.

One clean up crew supervisor was overheard saying "I wish I had a nickel for every cart we destroy." Dallas Blanchard, from Food Not Bombs, tried to prevent the workers from throwing the homeless peoples possessions away. He was forced from his position directly in back of the garbage truck. Liza Apper from the St. Benedict Catholic Worker stood in front of some shopping carts. She was repeatedly told to move but refused. Apper was able to save a couple of grocery carts full of items.

But that did not stop the police and the clean up crew. They simply moved a few feet beyond Apper and threw entire carts into the dump truck. Several people tried to pull their possessions back to the West side of the street (Caltrans land) and as they arrived were told the Garbage truck would be back to throw their things away. With no safe place to go, some of the homeless just stood by their carts to protect them. The police and clean up crew did not forcefully remove people to destroy their possessions.

Henry, an African American homeless man who lives on E street told me that officer Wallace had prevented him from removing his tent. "I was trying to untie my tent from the fence and this guy came up behind me and told me to leave. He was not in uniform and did not identify himself as a policeman." Henry continues, "this guy (Wallace) hit my hands as I tried to untie my tent." Henry said he was physically forced to leave his tent, which was then picked up by a bulldozer and put into a garbage truck. Henry is a diabetic. "My medicine was in that tent, everything I owned was in that tent and they just destroyed it." Henry said the incident happened in April 2006. Another homeless person, Dee, told me she witnessed the incident. Wallace denies the assault took place.

After targeting both sides of E street, the FPD and the Sanitation Department headed for Santa Clara street. Santa Clara runs into E and is in front of the Poverello House. Many of the homeless people who use the services at the Poverello House (food, clothing, and some medical services) leave their carts on Santa Clara. There were about 20 carts there when the garbage truck arrived. None of the owners were with their carts. The truck backed up and workers started throwing one cart after another in, crushing them. As the word of the destruction spread the owners came running out of the Poverello House yelling and telling the city workers to stop. Those homeless people who made it there in time and stood in front of their cart were able to save their possessions from destruction.

I requested a comment from the Fresno Police Department about the incidents above, but at the time our deadline, they did not respond.

For more information and background, see: 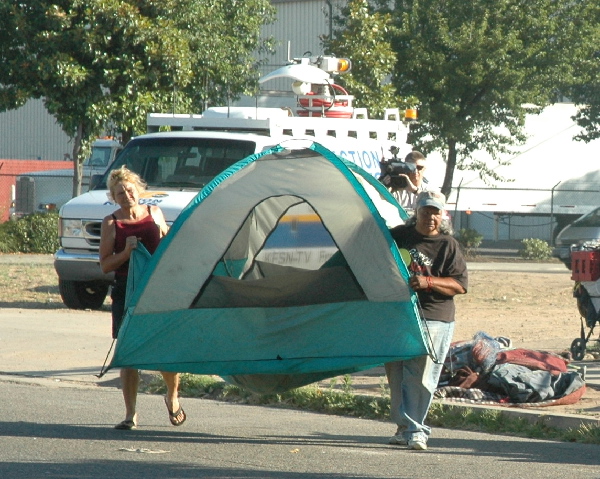 These two women moved this tent from one side of the street to another in an attempt to save it from destruction. All Photos by Mike Rhodes
§Possessions on the East side of E street
by Mike Rhodes 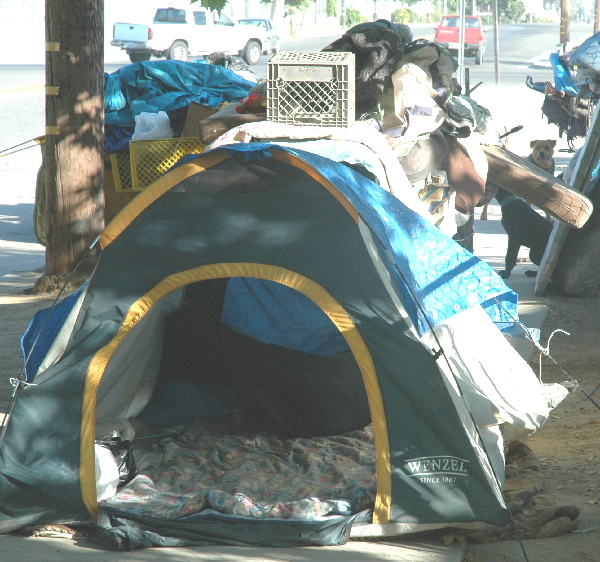 The homeless moved their possessions to the East side of E street in an effort to keep them from being destroyed.
§The City of Fresno Destroys Homeless Encampment
by Mike Rhodes 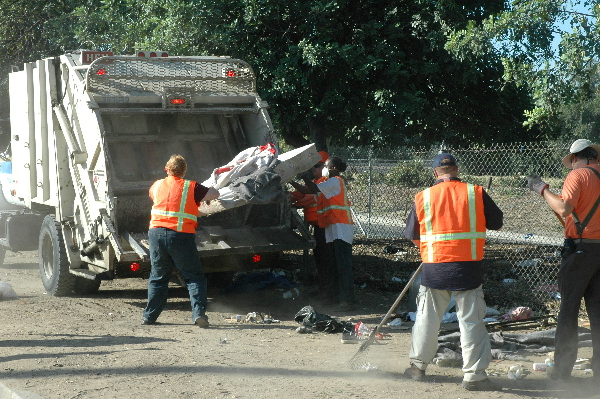 This is the scene on the West side of E street where City crews leveled the area. Here they are seen throwing someone’s bed into a garbage truck.
§Liza Apper is Told to Leave
by Mike Rhodes 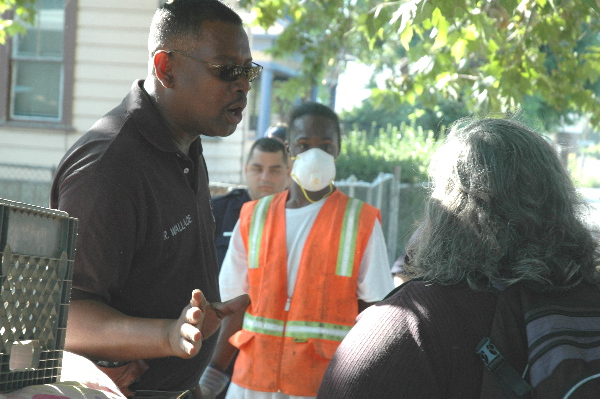 Officer Ray Wallace is telling Liza Apper to leave. Instead, she stands her ground and protects some of the homeless peoples possessions.
§Liza Apper on KMJ
by Mike Rhodes 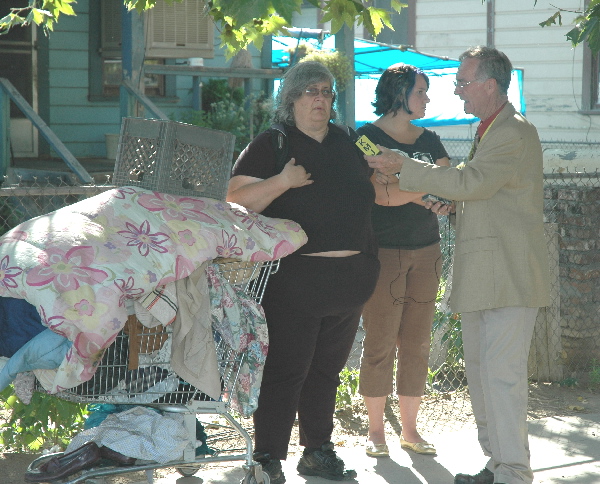 Liza Apper is seen here, next to some of the possessions she saved from destruction, as she talks to a KMJ radio reporter.

§Some of the Carts in Front of Poverello
by Mike Rhodes 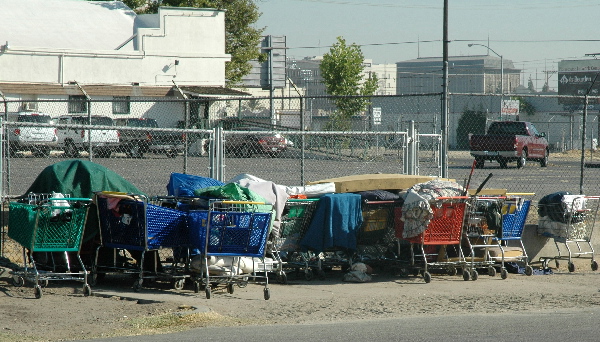 These are some of the carts that are in front of the Poverello House, while their owners get food or other services. A few minutes after this photo was taken, the Department of Sanitation arrived and started throwing these carts into a garbage truck.

§The Assault Continues
by Mike Rhodes 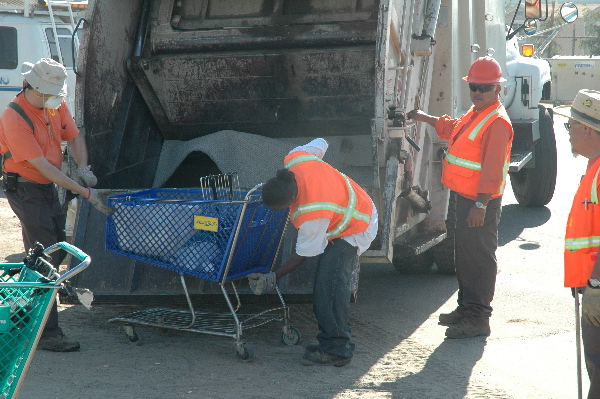 Within a couple of minutes, half of the shopping carts (pictured above) were destroyed. One sanitation worker was heard saying that he wished he could get a nickle for every shopping cart he destroyed.

§Video of City Workers As They Destroy People’s Property
by Mike Rhodes
Copy the code below to embed this movie into a web page:
Download Video (3.3MB) | Embed Video
City Worker is heard saying “I wish I had a nickel for every cart we destroy.” Video by Simone Whalen-Rhodes.
Add Your Comments
Latest Comments
Listed below are the latest comments about this post.
These comments are submitted anonymously by website visitors.
TITLE
AUTHOR
DATE
yeah and my dad was one of them
Katie
So sad to see how Central Valley treats its People
ann g
This is too sad
mary
bewildered
mcnappy
Through the eyes of a high school student
Bryan Apper
The Fresno Bee's Spin on the Attack
Annon
cynthia sterling is worthless
kelly borkert
Gail Gaston
Gail Gaston
Support Independent Media
We are 100% volunteer and depend on your participation to sustain our efforts!