by Mike Rhodes (MikeRhodes [at] Comcast.net)
A report on homeless conditions in Fresno. 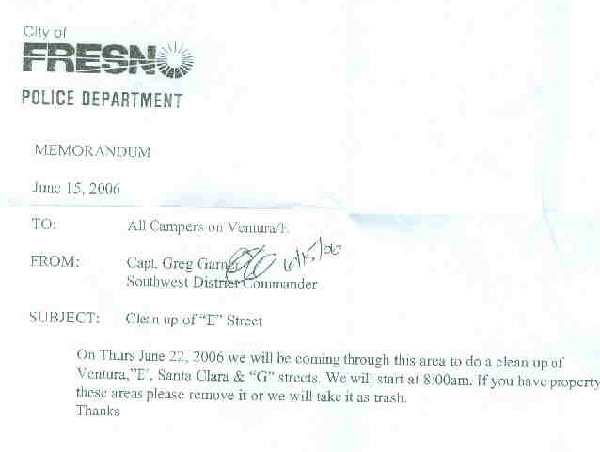 The homeless living in downtown Fresno have been notified that their temporary shelters will be destroyed if they are not moved by tomorrow (Thursday, June 22) at 8 AM. The memorandum from Captain Greg Garner of the Fresno Police Department said:

On Thurs June 22, 2006 we will be coming through this area to do a clean up of Ventura, "E’, Santa Clara & G streets. We will start at 8:00 am. If you have property in these areas please remove it or we will take it as trash.
Thanks

For earlier coverage about these ongoing attacks on the Fresno Homeless, see:

In conversations with several homeless people today, I was told that conditions are getting harsher in the downtown area. Last night, for example, a gang of three or four young men came into the encampment and beat several people with a pipe. According to the witnesses, at least one victim required several stitches.

It is expected that tomorrow at 8 AM the Fresno Sanitation Department and Caltrans, protected by the FPD will clear several homeless encampments. Caltrans claims they are being forced to act by the City of Fresno who has filed paperwork with them - forcing them to clear the land the homeless occupy. FPD spokesperson Jeff Cardinale says they are notified by Caltrans about two weeks in advance of the "clean up." Cardinale says the FPD are not initiating the clean up - they are only there to maintain public safety while Caltrans and the Sanitation Department do their jobs.

The big question is - who is the moving party behind destroying the few possessions the homeless own? No government agency involved wants to take credit, yet they come back every two or three weeks and do it all over again. As Allen, one of the homeless men who lives on E street said during the last eviction on May 25, 2006 "why does the city have the resources to destroy our community but not to provide portable toilets or dumpsters for the trash that accumulates?"

END_OF_DOCUMENT_TOKEN_TO_BE_REPLACED
Add Your Comments
Support Independent Media
We are 100% volunteer and depend on your participation to sustain our efforts!