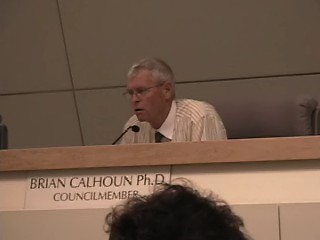 Several speakers, during the public testimony portion of the hearing criticized the proposal for its lack of a policy manual that would regulate how the cameras were used. Issues that came up included:

* Who will have access to the video recordings?
* How long will the data be stored?
* What will prevent camera operators from voyeuristically or inappropriately using the equipment?

There was also concern that there had not been sufficient dialog within the community to decide if video surveillance was something people are comfortable with. Would $1.2 million be better spent on video surveillance equipment or putting more officers on the street? What are the civil liberties implications of having cameras watching people in public spaces?

Dyer’s proposal included a couple of new elements, not included in the earlier Indymedia article (mentioned above). One is a proposal for cameras that will scan automobile license plates and compare them with a database of stolen cars. The other new proposal is to establish a panel that will oversee the video surveillance project.

The FPD budget hearing will continue tonight at 6 PM at the Fresno City Hall council chamber. It is expected that council president Jerry Duncan will propose that funding for the FPD video surveillance project be held up until a policy manual (regulating the use of the cameras) is written and approved.

The accompanying video is council member Brian Calhoun’s criticism of the video surveillance proposal and his motion to not fund the project.

###
http://www.fresnoalliance.com/home
§Calhoun Video
by Mike Rhodes Thursday Jun 15th, 2006 9:24 AM
Copy the code below to embed this movie into a web page:
Download Video (11.0MB) | Embed Video
The accompanying video is council member Brian Calhoun’s criticism of the video surveillance proposal and his motion to not fund the project.