Add an Event
Newswire
Calendar
Features
Home
Donate
From the Open-Publishing Calendar
From the Open-Publishing Newswire
Indybay Feature
Publish to Newswire
Add an Event
Related Categories: East Bay | Anti-War | Arts + Action
"Army of One" vs. "Army of Fun"
by Major Mischief (circasf [at] yahoo.com)
Wednesday Jun 7th, 2006 8:31 PM
The Clandestine Insurgent Rebel Clown Army (CIRCA) occupied the
military recruitment center in downtown Oakland for about 45 minutes
until we were forced out and the center shut down for the day.
Gooooo Clowns! (Lots of silly pictures) 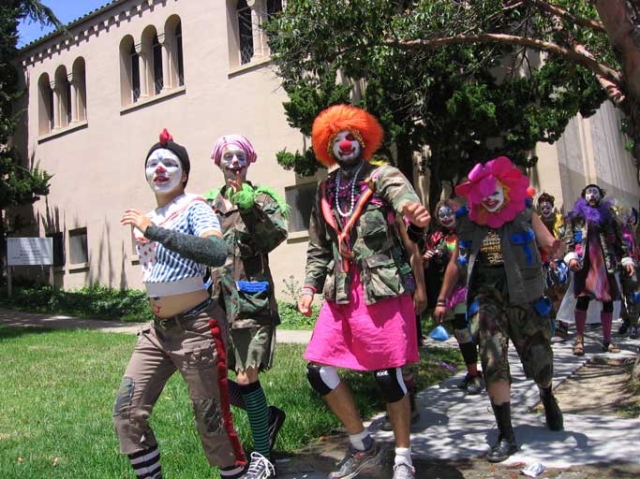 The Clandestine Insurgent Rebel Clown Army (CIRCA) was out in force in Oakland today. Inspired by another group that played music and blockaded the recruitment center a few weeks ago, we decided to pay it a visit of our own.

We went to see if us clowns could fly big planes and drive big cars too, but the army people were too serious and tried to kick us out. Once we played some games and explained consensus to them, they were a little happier with us. We decided their army was boring and set up our own recruiting table for the "Army of Fun" outside while the rest of us tried to get them to laugh.

After like 45 minutes, the Oakland Police showed up and made us all leave. We were sad to leave the fun party inside, but I think the army people just wanted an excuse for a day off, because right after we left, they shut down the office and headed home. We stuck around and convinced a number of pedistrians to join our army, then marched around downtown Oakland spreading an anti-war message.

Thanks to the Permaculture Army and Copwatch for their support.
Thanks to Matt Leonard for these photos. 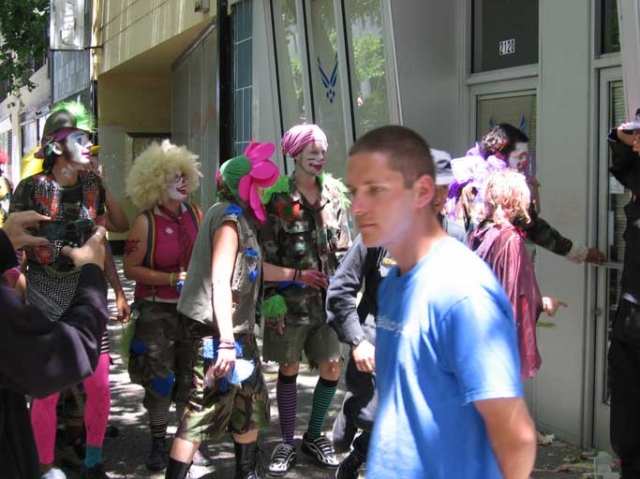 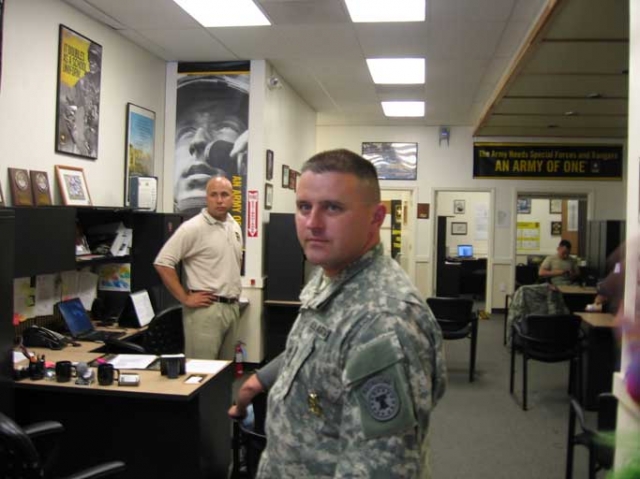 http://www.clownarmy.org/
§But after falling all over ourselves,
by Major Mischief (circasf [at] yahoo.com) Wednesday Jun 7th, 2006 8:31 PM 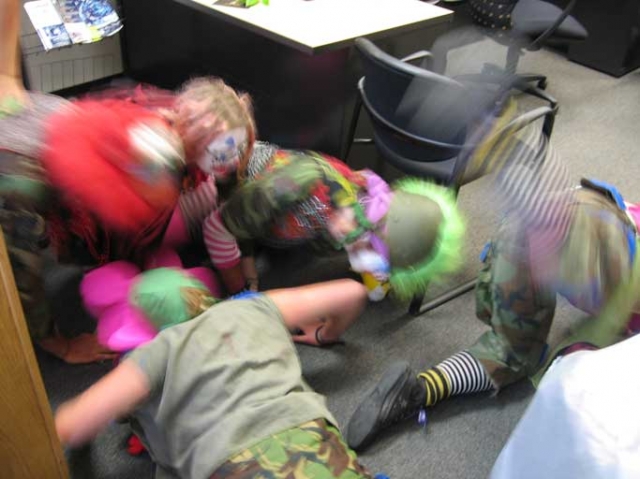 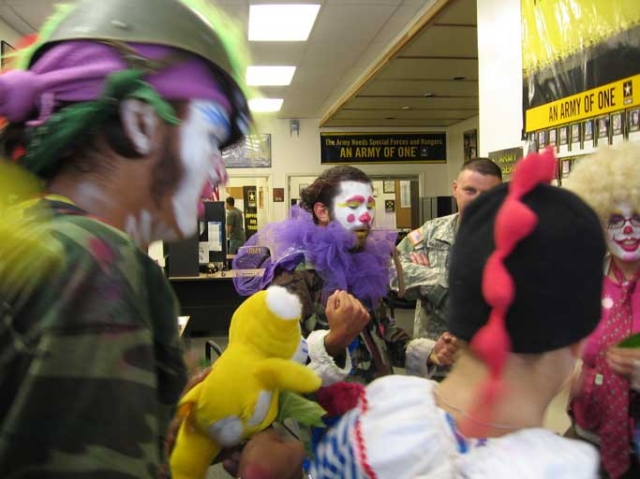 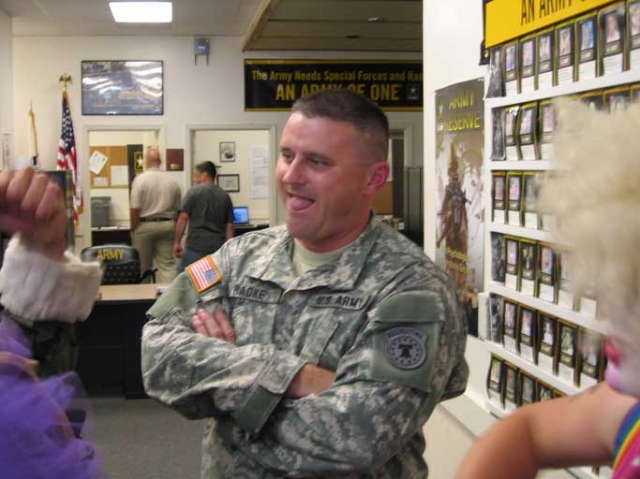 http://www.clownarmy.org/
§We decided we looked better than the army of one,
by Major Mischief (circasf [at] yahoo.com) Wednesday Jun 7th, 2006 8:31 PM 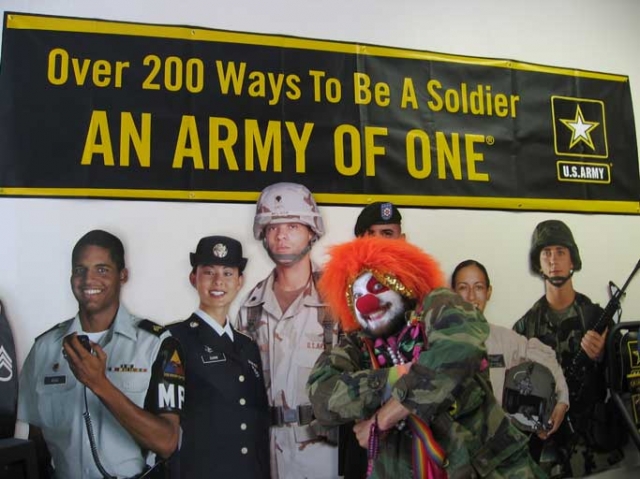 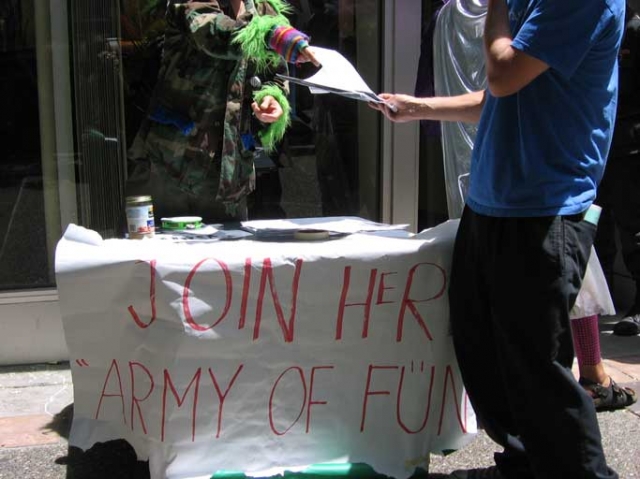 http://www.clownarmy.org/
§Including the military themselves.
by Major Mischief (circasf [at] yahoo.com) Wednesday Jun 7th, 2006 8:31 PM 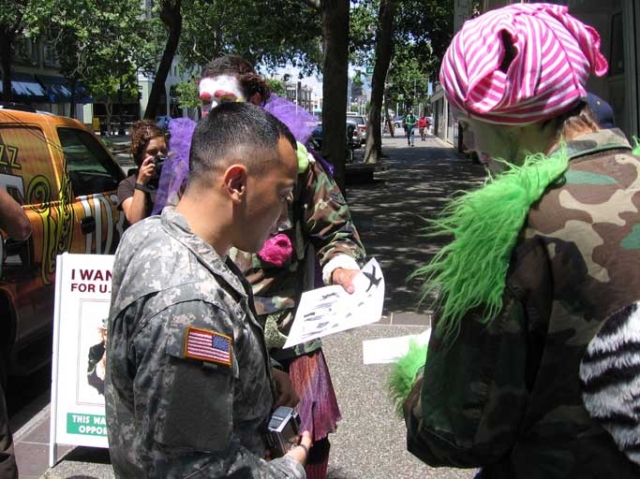 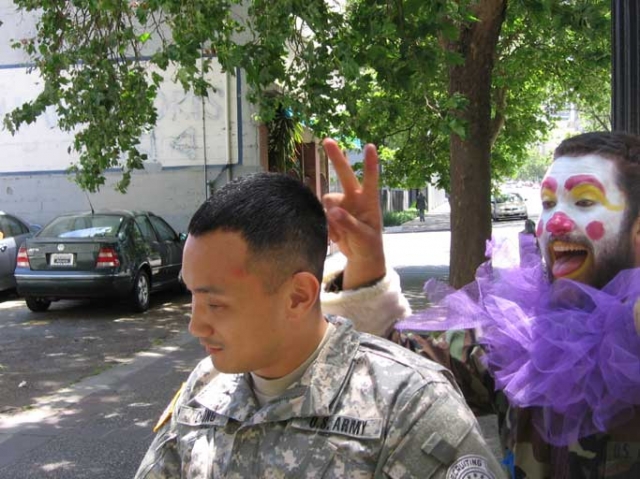 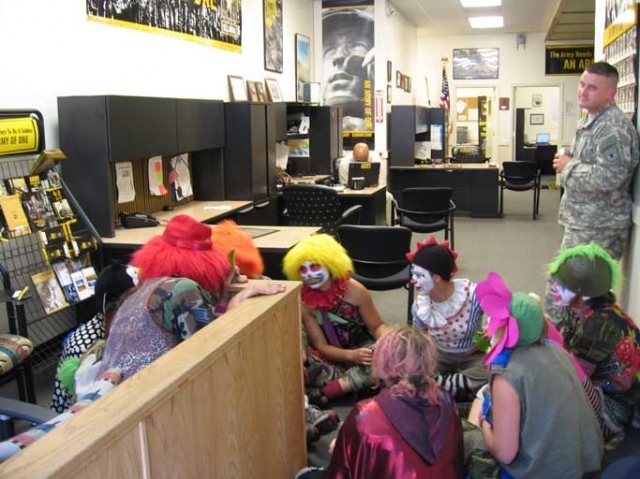 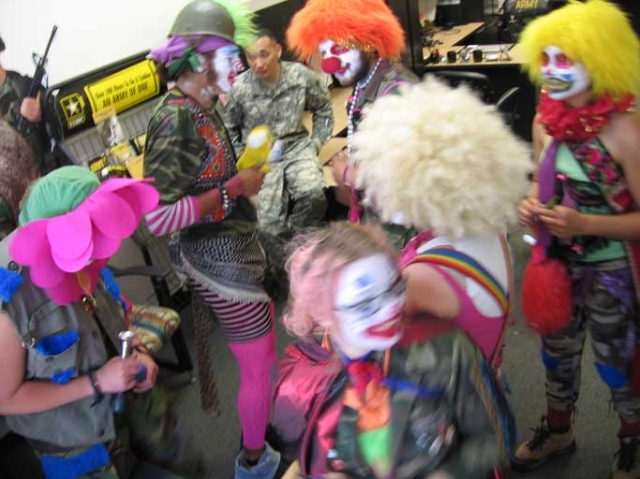 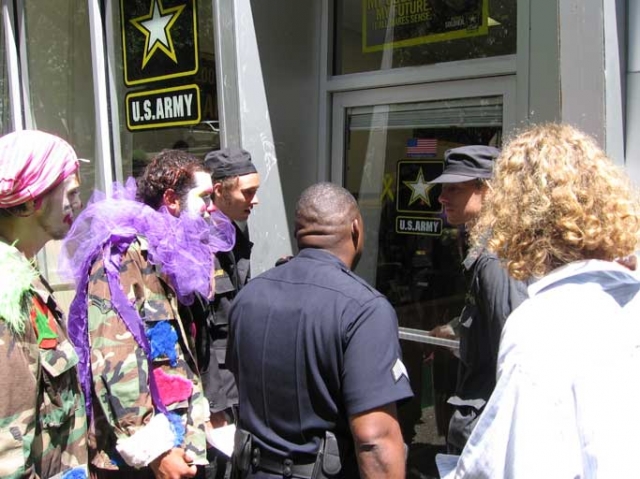 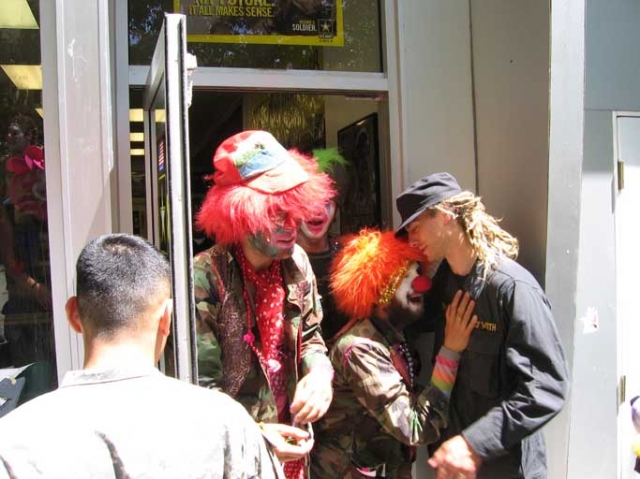 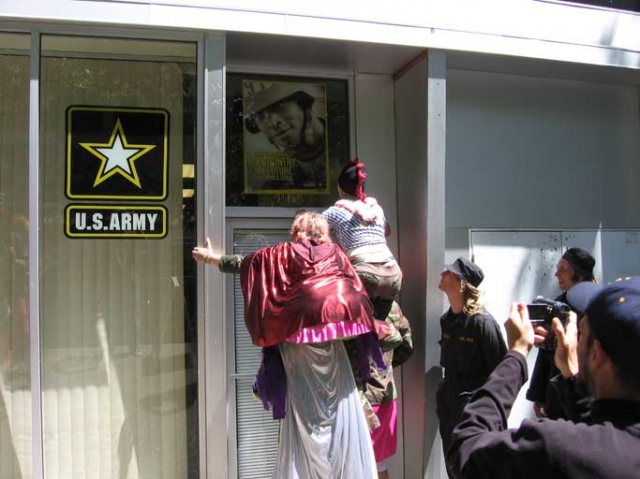 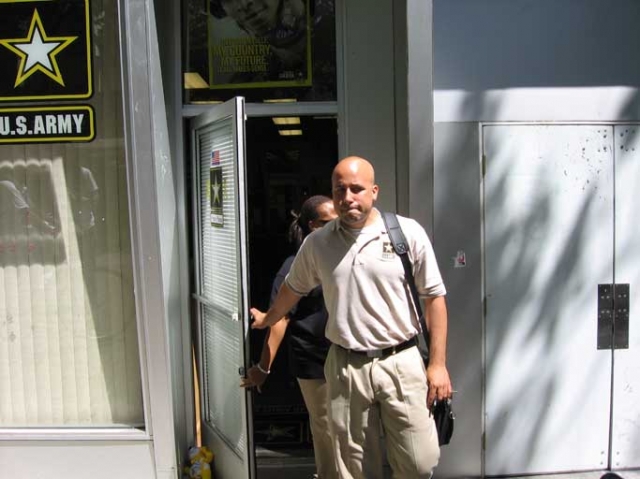 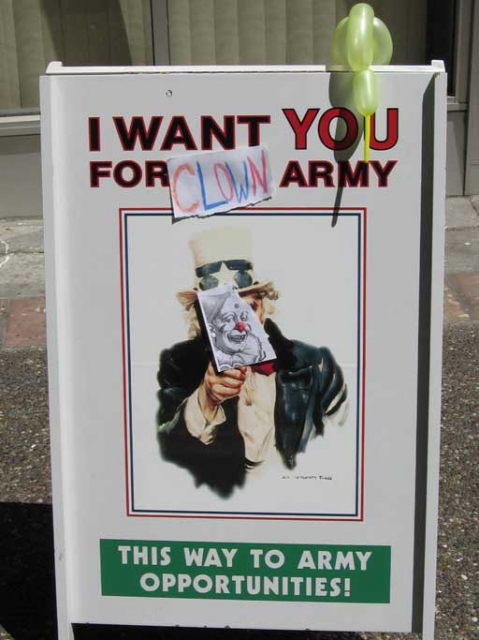 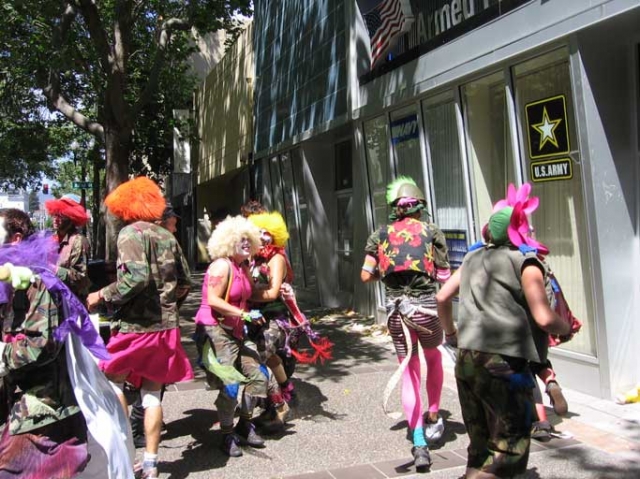 http://www.clownarmy.org/
§Thanks to the permaculture army for their support.
by Major Mischief (circasf [at] yahoo.com) Wednesday Jun 7th, 2006 8:31 PM 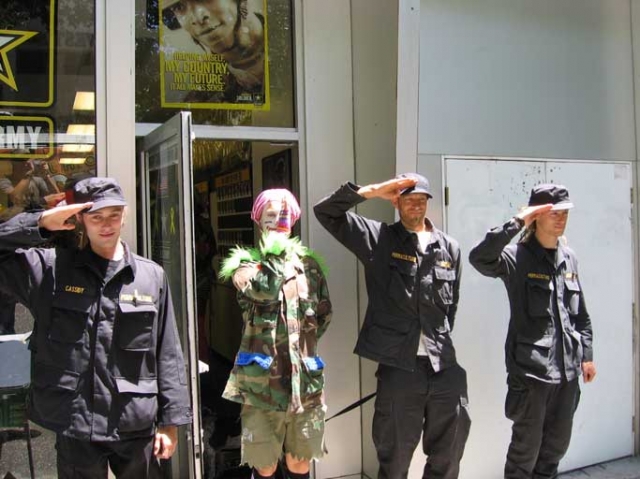 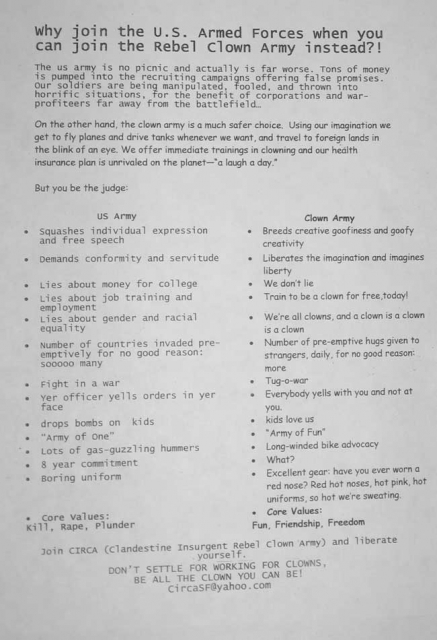 http://www.clownarmy.org/
§clown army action. copwatcher jacob crawford has camera grabbed by soldier
by jacob crawford Friday Jun 9th, 2006 9:43 AM
Add Your Comments
LATEST COMMENTS ABOUT THIS ARTICLE
Listed below are the latest comments about this post.
These comments are submitted anonymously by website visitors.