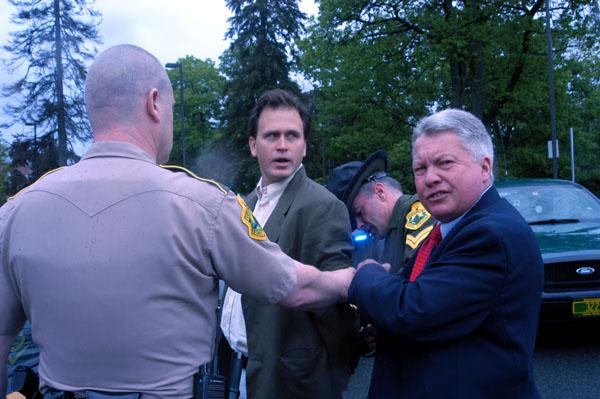 St. Johnsbury,VT--National Intelligence Director John Negroponte's
Commencement Address to the graduating class of private St. Johnsbury
Academy was disrupted twice by protesters inside the auditorium where
the ceremony was being held.

Over 75 protesters gathered on the sidewalk outside of the Academy
protesting Negroponte's shadowy record that spans decades including a
stint as the U.S. Ambassador to Honduras and Ambassador to Iraq
before his present position as the nation's number one "intelligence"
overseer. Two other protesters from Vermont School of the Americas
Watch were arrested as they attempted to gain entrance to the
auditorium. (More details of Negroponte's actions in Honduras and
his complicity in Nicaragua during the Contra War in the 1980's).

Briefly after Negroponte began his address, Michael Colby, a horse
logger from Worcester, VT stood up saying, "In the name of democracy
I object to this man speaking. He has blood on his hands from his
work in Central America and Iraq. He shouldn't be at the podium, he
should be in jail. He is a war criminal." Colby was grabbed by
police and security and escorted out of the auditorium to awaiting
police cars.

As Colby was being escorted away, Negroponte told the audience, "Now
it's my turn." But before he could continue, Boots Wardinski,
another logger quickly rose stating, "No! It's my turn! When the
headmaster intorduced Negroponte, he forgot to tell about all the
people tortured, killed and raped (under Negroponte's helm in
Honduras). You should be ashamed to stay in here and listen to this
man."

Some of the protesters assembled outside started to move toward the
auditorium. Palmer Legare and Brendan O'Neill, both from Vermont
School of the Americas Watch, were grabbed by the police and arrested.

O'Neill shouted to reporters and bystanders, "They are arresting the
wrong people. This man (Negroponte) teaches war not peace. He is
responsible for the murders of 30,000 innocent Nicaraguans."

"Negroponte should have been arrested," stated Legare as he was being
arrested and put into a police car. Legare continued, "he is a war
criminal."

After the four were released, Colby said that he told the arresting
officer that, "I come in peace." Colby said then the officer punched
him in the stomach.

Wardinski said his arresting officer called him a, "punk asshole."

Fliers handed out by protesters made the accusation that while
Negroponte was "ambassador to Honduras from 1981-1985, he
collaborated with the Honduran military government overseeing one of
the most scandalous and shameful periods of U.S. foreign policy
overseeing:

"-An increase in military aid to Honduras from $4 million a year to
over $77 million
--An illegal and unauthorized 'Contra' war against the Sandinistas in Nicaragua
--Increased collaboration between U.S. military, CIA., Honduran
military and the Nicaraguan Contras forming paramilitary death
squads, secret torture and detention camps and widespread
assassinations of peace and justice activists
--The disappearances of 32 American women social justice church leaders
--Collaboration between the CIA with the School of the Americas's
trained founders of the infamously violent Honduran paramilitary
organizartion Batallion 3-16
--Censorship of the media's reporting on the war
--The now infamous Iran-Contra Scandal...after the U.S. congress
voted to withdraw support for the (war) due to widespreadhuman rights
abuses by the Contras..."

Although Negroponte did not speak about foreign policy or government
spying on people in the U.S. during his speech, most protesters were
alarmed that Negroponte was chosen as the Commencement speaker for
St. John's Academy (even though Negroponte's son was graduating.)
Long time activist Brian Tokar told reporters, "It's outrageous that
he's being given a position of honor in our community."

Activists also pointed out that another Vermonter, Robin Lloyd, is
in federal prison after being convicted of "crossing the line" at a
Fort Benning, GA, School of the Americas protest that happened last
November.

Orin Langelle and Anne Petermann are Co-Directors of Global Justice
Ecology Project and are contributors to various publications
internationally.


Global Justice Ecology Project
P.O. Box 412
Hinesburg, VT 05461 U.S.
END_OF_DOCUMENT_TOKEN_TO_BE_REPLACED
Add Your Comments
Latest Comments
Listed below are the latest comments about this post.
These comments are submitted anonymously by website visitors.
TITLE
AUTHOR
DATE
The Devil (Bush) on Death Squad Diplomacy
The Devil (Bush)
Support Independent Media
We are 100% volunteer and depend on your participation to sustain our efforts!