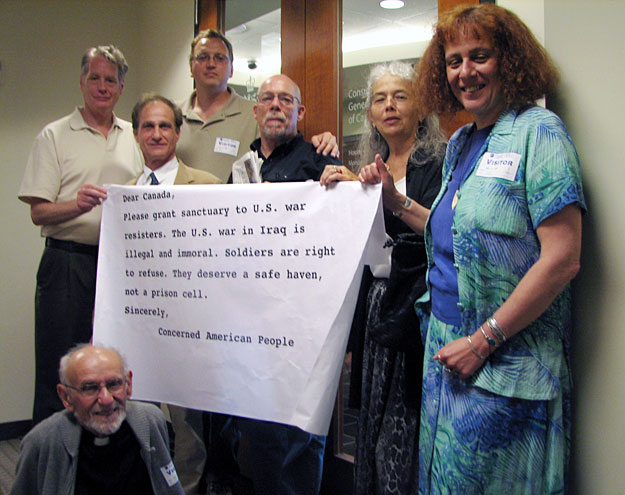 On May 15, International Conscientious Objectors Day, a delegation of concerned Californians visited the Canadian Consulate in San Francisco to appeal for sanctuary for U.S. war resisters in Canada. The visit was coordinated by Courage To Resist, Project Safe Haven and the Central Committee for Conscientious Objectors (CCCO). The delegation included military veterans, a Catholic priest, an expert on international law, and resisters of U.S. wars, present and past. Four delegation members lived in Canada during the Vietnam War.

They delivered a letter addressed to Peter MacKay, Canada's Minister of Foreign Affairs, and Monte Solberg, Minister of Citizenship and Immigration. The letter was received by Tristan Landry, Consul, Political/Economic Relations and Public Relations, who listened respectfully as each of his visitors stated their support for sanctuary for U.S. war resisters in Canada.

Gerry Condon of Project Safe Haven gave a brief overview of the plight of U.S. war resisters in Canada, telling the Canadian Consul that several hundred AWOL GI's were estimated to be in Canada, and that 25 of them have applied for political refugee status. The first two, Jeremy Hinzman and Brandon Hughey, have had their claims for refugee status denied, but they are appealing in Canada's Federal Court system.

"I know these young people personally," said Condon. "I know how sincere they are. Several of these young men already served one tour in Iraq. They were witness to U.S. war crimes and, obeying international law, they refused to return for more of the same. If Canada's refugee system cannot accommodate U.S. war resisters, then we appeal to the Canadian government to fashion a sanctuary policy, as called for by many Canadians, including Members of Parliament."

Jacqueline Cabasso, Executive Director of the Western States Legal Foundation, forcefully argued that the U.S. war in Iraq is illegal. "It must be opposed not only as a matter of law, but as a matter of principle," she said. "If the Bush Doctrine of preemptive war is allowed to stand, the next states in line may be Iran and North Korea, as we have seen."

Ms. Cabasso later said she was encouraged when the Canadian representative reminded her that Canada had refused to participate in the war in Iraq. "So, welcoming conscientious Iraq War resisters from the United States would certainly be consistent," she asserted.

Several Vietnam War resisters spoke passionately about Canada's traditional role, in the words of former Prime Minister Pierre Trudeau, as a "refuge from militarism." Keith Mather, Evangeline Lantana Mix, and Steve Grossman each thanked Canada for providing them with a viable alternative to going to war or to prison during the Vietnam War.

"When a U.S. judge promised me five years in prison for refusing to be drafted into an unjust war, I decided to go to Canada instead," said Steve Grossman, a theater arts teacher. I am very grateful to the Canadian people and government for five years of creative, useful life instead of five years in prison. And I want to thank those Canadians who are now welcoming another generation of young Americans of conscience."

Father Louis Vitale, who recently finished a six-month prison sentence for peacefully protesting the "School of the Assassins" at Fort Benning, Georgia, was nonetheless passionate about supporting the troops. "Our military people are really in danger," said Father Vitale. "They're really at high risk. Some of them are threatening suicide, or are on the border of suicide. Some of them are tortured in prison. Some of them give in and do go to Iraq and do get killed. They really need the humanity that exists in Canada to accept them and give them sanctuary."


"Political persecution is a reality for people
opposing the war within the U.S. military."

Jeff Paterson, an organizer for Not In Our Name, spoke last. "During the first Gulf War, I was a United States Marine," said Paterson. "I considered that war unjust and immoral and I applied for a discharge as a Conscientious Objector. The Marine Corps told me I was sincere, but not sincere enough. I quickly found myself serving months in the military brig.

"Political persecution is a reality for people opposing the war within the U.S. military," continued Paterson. "That's why a safe haven in Canada is a necessity. It's not a theoretical thing; it's not a political stunt we're trying to do."


Canadian Consul: "Is the Conscientious Objector system not working?"

The Canadian Consul, Tristan Landry, then asked the delegation a question. "Don't these soldiers have alternatives within the military? Because this is what we are hearing from our counterparts [in the U.S. government]. They are telling us that if soldiers are opposed to going to war, they can apply for Conscientious Objector status. Is that system not working?"

One after another, members of the delegation explained how the current system for applying for Conscientious Objector status is inadequate and arbitrary. The Canadian representative was told that only a very few GI's are granted this status, just enough for the military to claim there is an "alternative." Many soldiers are never told of their option to apply for Conscientious Objector status. Or they are told that C.O.'s are cowards and homosexuals to be scorned and abused.

In 2004, Sergeant Kevin Benderman, a 10-year Army veteran, returned from the Iraq War and declared himself a Conscientious Objector. The Army violated its own procedures, denied him C.O. status, and ordered him back to Iraq. But Benderman refused to return to war. Last July, he was given a General Court Martial, usually reserved for high crimes. He was convicted of "missing movement" and was sentenced to 15 months in prison and a Dishonorable Discharge.

As Benderman was led off to prison, his company commander, Army Captain Gary Rowley, had some telling words: "If [the rest of the Army] saw this and found out it works using smoke and mirrors to get by, we'll have other soldiers saying, 'Well, I'm a conscientious objector.' They need to know there are consequences for not doing their duty." In other words, Kevin Benderman was sent to prison in order to intimidate his fellow soldiers from getting any ideas.

Delegation members also explained that the U.S. military grants Conscientious Objector status only to those who can prove they are opposed to all war, such as religious pacifists. This narrow definition does not take into account a soldier's obligations under international law.

The Canadian Consul asked the delegation to provide further documentation about the problems with applying for C.O. status. The delegation thanked him for receiving them so courteously, promised to provide the information he requested, and bid him "adieu."

Outside the Canadian Consulate, Bill Carpenter of Indymedia videotaped the delegates' statements. Courage To Resist organizer David Solnit said, "Our democracy has failed us and we've been forced into an illegal and immoral war. Our soldiers are the one hope to restore that democracy and to shut down that war. That's why we must support them in every way we can."

There are Canadian government offices in twenty U.S. cities. Those wishing to appeal to the Canadian government on behalf of U.S. war resisters are encouraged to contact Project Safe Haven at projectsafehaven [at] hotmail.com
or the War Resisters Support Campaign in Toronto at resisters [at] sympatico.ca
or 416-598-1222.
For more information on military resisters and how to support them, please visit
http://www.CourageToResist.org

http://resisters.ca/
Add Your Comments
LATEST COMMENTS ABOUT THIS ARTICLE
Listed below are the latest comments about this post.
These comments are submitted anonymously by website visitors.