Newswire
Calendar
Features
Home
Donate
From the Open-Publishing Calendar
From the Open-Publishing Newswire
Indybay Feature
Publish to Newswire
Add an Event
Related Categories: Santa Cruz Indymedia | Animal Liberation
We Are All Animals; Circus Gatti Comes to Watsonville to Benefit the Police
by ~Bradley (bradley [at] riseup.net)
Monday May 22nd, 2006 11:25 PM
MJG Entertainment, Inc's Circus Gatti, based in Hemet, California, operates approximately 450 circuses in 150 towns each year. The performances include acrobats, jugglers, a high-wire act and captive wildlife such as horses, tigers and elephants which are trained to entertain young children and their adults. On May 20th and 21st, Circus Gatti brought their show to Watsonville in a benefit for the Watsonville Police. People concerned about the rights of the animals being exploited by Circus Gatti were at the Santa Cruz County Fairgrounds holding signs, passing out flyers in english and spanish and speaking with circus-goers about the sad life of circus animals. 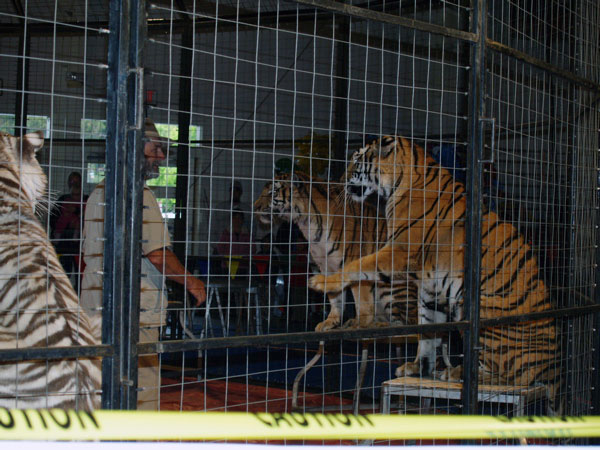 On May 21st, about a half dozen people concerned about animal rights decided to educate people attending the noon and 5:00pm circus held at the Santa Cruz County Fairgrounds in Watsonville. There were a few people who protested the circus on May 20th. Tigers, horses and elephants were being exploited for profit by Circus Gatti and the Watsonville Police.

Activists were able to outreach to almost everyone in attendance. Most people were very receptive to learning about the lifestyles and living conditions of circus animals. Many people said they were sorry they decided to go to the circus, they would not have gone if they had known about the animals and that they would not return next year.

A man who said his name was Yarrow Hoffman was furious with the people who were raising awareness about animals. Yarrow says that he owns the tigers and that the activists have no proof that his mistreats them. Yarrow was also angry at a female employee for the County Fairgrounds and demanded that she take action to remove the activists. She told Yarrow that the activists were not doing anything wrong and they were able to hold signs and pass out flyers as long they did not enter the gate after the ticket booth. Yarrow then pointed a couple of people holding a banner and insisted to the employee of the fairgrounds that, "these people are wanted by the FBI and they burn down buildings..."

Yarrow then called the Santa Cruz County Sheriffs to complain about the activists. It did not take long for three police cars to come speeding to the scene. This happened during the 12:00pm circus performance after Yarrow and his tigers finished their act.

Santa Cruz County Animal Services was called to inspect the conditions of the animals. An inspector named Todd showed up, did an inspection and found that none of the animals were sick, other than some broken toe nails. He said that it is the job of the USDA, not animal services, to determine in the cage is an adequate size for the animals. Although it was not his job, Todd said that he observed that the tigers were able to completely turn around and therefore the cages were adequate. He stressed that it was not his job to inspect the cages. A woman who requested that Animal Services do the inspection was not satisfied with Todd's findings and began requesting more information from him. She insisted that the tigers did not have room to fully stretch their bodies while inside the small transport cages in which they are held. With a smirk on his face, Todd drove away telling the woman to, "Say hi to Lisa Wathne." Lisa Wathne is an activist who works for People for the Ethical Treatment of Animals (PETA). The activist was upset with Todd's remark about Lisa Wathne and insisted that she was not working for PETA.

There were more people who showed up to see the 5:00pm performance. Since there were more people, the line to buy tickets was longer and this gave circus-goers more time to engage with the animal rights activists. Again, many people were upset when they began to think about how it must feel to be an animal forced to live in captivity and perform in a circus. A group of six people walked back to their car and decided to not support the circus even though they made plans to see it and were already at the fairgrounds.
§Stop Animal Abuse. Boycott Animal Circuses
by ~Bradley (bradley [at] riseup.net) Monday May 22nd, 2006 11:25 PM 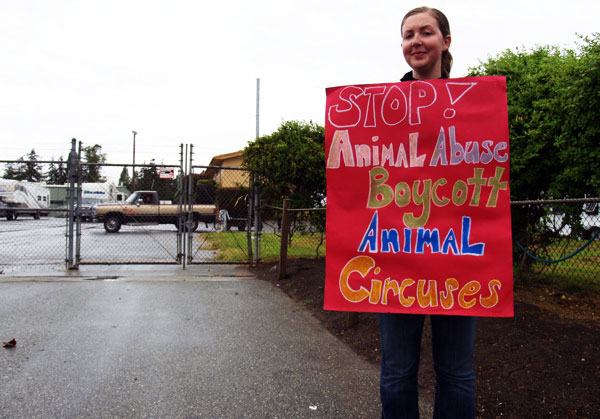 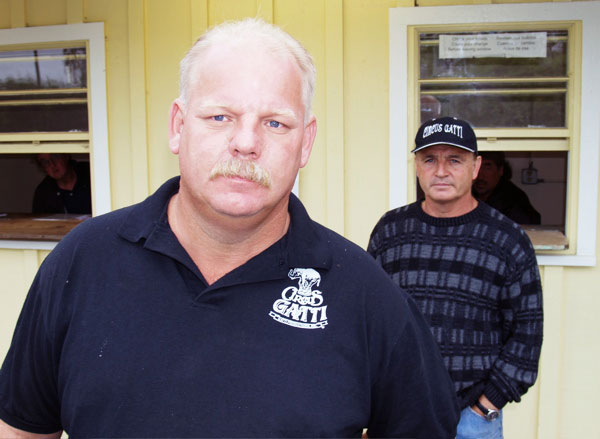 Circus Gatti does not own the animals, but they coordinate and promote the circuses.
§This Woman Can Not Believe the BS coming from Yarrow's Mouth
by ~Bradley (bradley [at] riseup.net) Monday May 22nd, 2006 11:25 PM 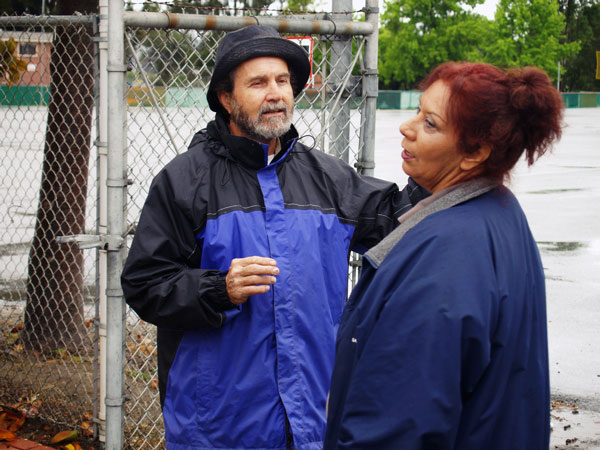 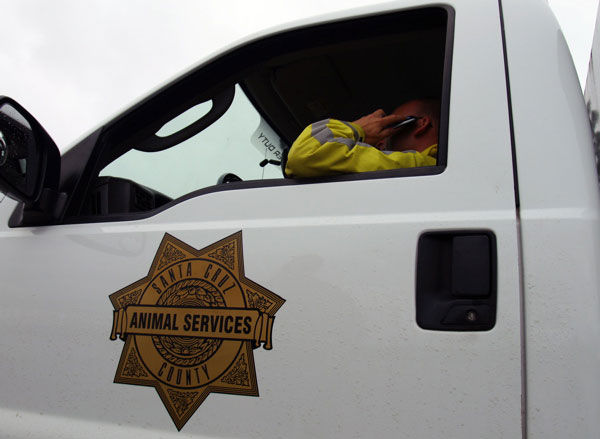 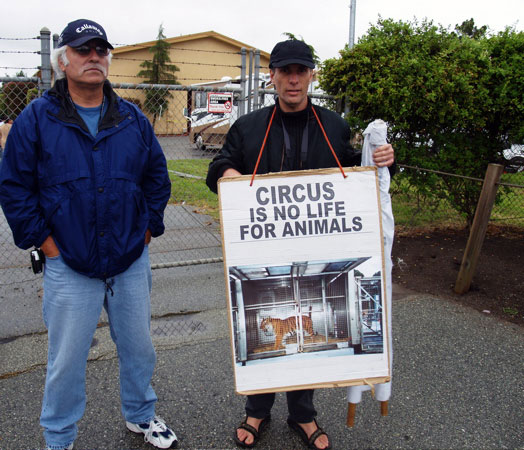 A represenative of the Watsonville police stands next to an animal rights activist.
§Unnatural Behavior. Physically Harmful
by ~Bradley (bradley [at] riseup.net) Monday May 22nd, 2006 11:25 PM 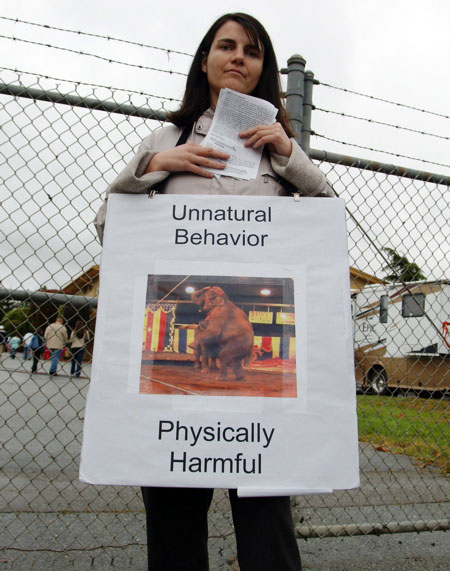 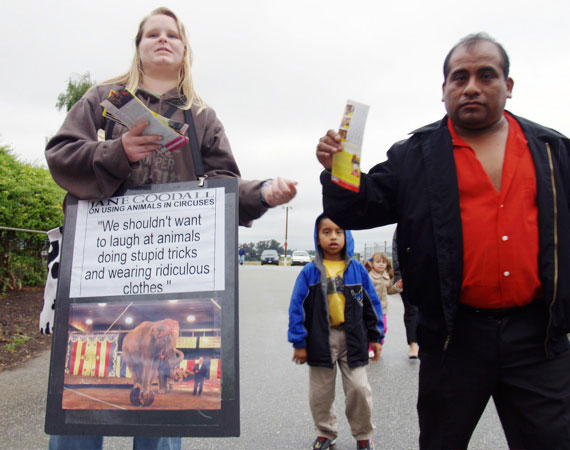 La carpa de la crueldad
http://www.petaenespanol.com/cmp/ent-circos.html
§Not Fun For The Animals
by ~Bradley (bradley [at] riseup.net) Monday May 22nd, 2006 11:25 PM 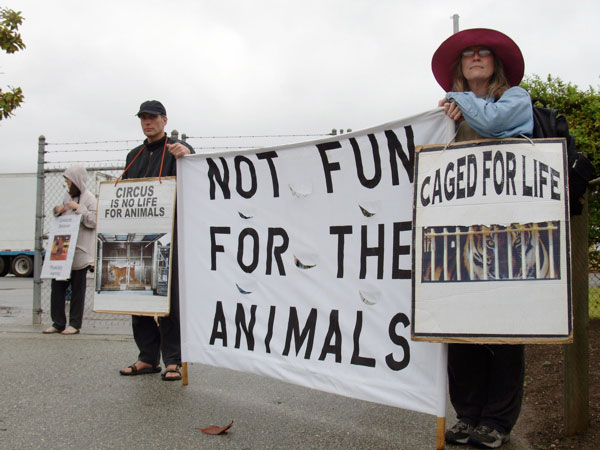 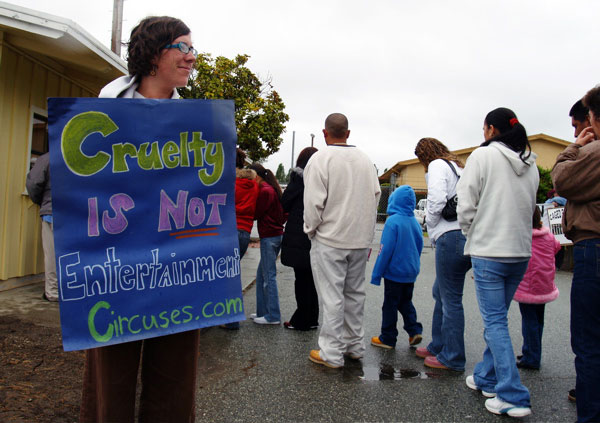 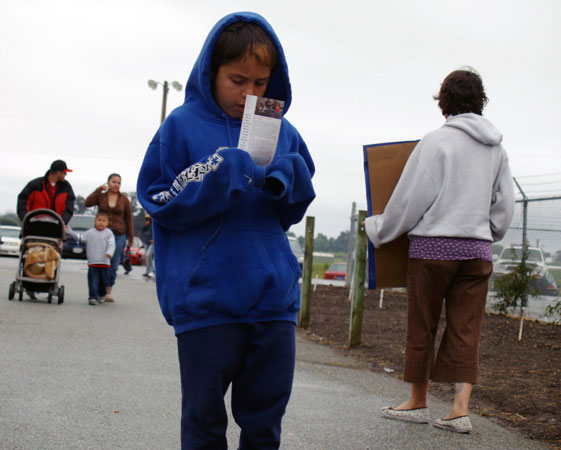 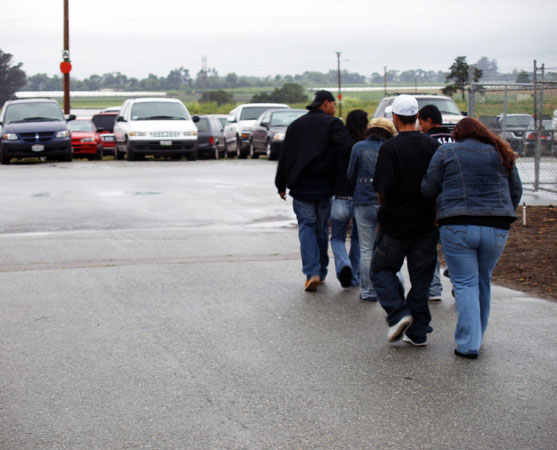