Add an Event
Newswire
Calendar
Features
Home
Donate
From the Open-Publishing Calendar
From the Open-Publishing Newswire
Indybay Feature
Publish to Newswire
Add an Event
Related Categories: San Francisco | Media Activism & Independent Media
DAY OF OUT(R)AGE AGAINST TELCOS—MAY 24TH
by save access (protest [at] saveaccess.org)
Wednesday May 17th, 2006 2:02 PM
SUPPORT PUBLIC ACCESS TV—SUPPORT INTERNET ‘NET NEUTRALITY’—AND STOP THE PHONE COMPANIES’ “TECHNOLOGY REDLING” OF LOW INCOME COMMUNITIES!
Wednesday May 24th—Protests planned at phone company offices in NYC, Boston, Chicago, San Francisco and other cities to expose efforts by the phone companies to push legislation that could end the Internet as we know it, increase the digital-divide through redlining—and destroy Public Access TV! For more information, or to organize action in your town, go to http://www.saveaccess.org —or email Info [at] saveaccess.org 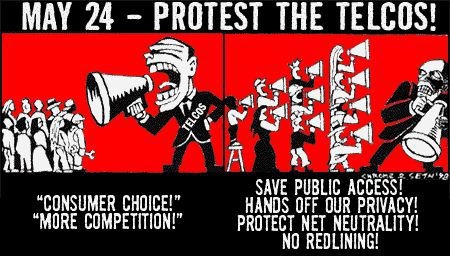 On Wednesday May 24th hundreds of people will “Out(R)age” against the phone companies in cities around the country—and against deregulatory phone company backed legislation and the ‘million-dollar-a-week’ efforts by the telcos to pass ‘their’ legislation in Washington.

The telcos are pushing legislation that will allow them to:
1) Change the rules that for decades have supported Public, Educational and Governmental (PEG) Access TV—that gives the public a voice in the media in towns and cities around the country.
2) Bring services only in the most profitable areas—and skip over low income, rural or minority neighborhoods—thereby increasing the already vast digital-divide.
3) End the Internet as we know it—by introducing a pay-as-you-go system there content they favor is instantaneously available while non-commercial Internet content is stuck in the slow-lane or not accessible at all.

The day of “Out(R)age” has been planned to highlight popular opposition to this legislation—and to counter the aggressive lobbying efforts of the telcos who are spending over a million dollars a week on lobbying efforts, advertising campaigns, and on the funding of ‘astroturf’ front groups which appear to show grassroots public support for the telco’s COPE bill—but are actually telco front organizations.

We are outraged that representatives of Video Access Alliance—a bogus Astroturf group—have been invited to testify at hearings of the bills—while the Alliance For Community Media legitimately representing millions of people—has been barred.

The protests are being coordinated by “Saveaccess”—a grassroots coalition of people from around the country who are concerned about the damage the COPE bill (H.R. 5252) and Senate bill S.2686 would do to Public, Educational and Governmental (PEG) TV nationwide. Grassroots organizations participating in the day of Outage so far include SF Media Alliance, Chicago Media Action, Center for Digital Democracy, Grassroots Media Coalition (GMC), Action Coalition For Media Education (ACME) Boston, and the media watchdog organization Fairness and Accuracy in Reporting (FAIR).

Organizers say that while large protests are planned for cities like New York, Boston and Chicago—people around the country can organize actions of all sizes—your protest could be as simple as distributing flyers at the phone company store in your area. Go to saveaccess.org for sample flyer materials!

For information about these and other actions visit: http://www.saveaccess.org