by Mike Rhodes (MikeRhodes [at] Comcast.net)
The homeless are experiencing renewed attacks as the Fresno Police Department and Caltrans destroy their tents. 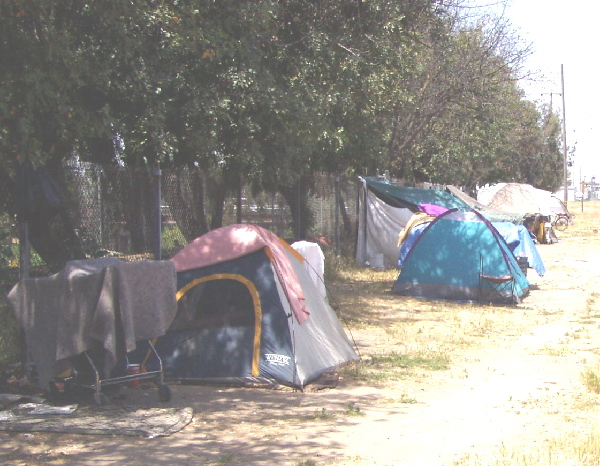 On a small strip of land, next to highway 99, and near the Poverello House, the homeless constructed a few tents and temporary shelters. Last week, Caltrans and the Fresno Police Department (FPD) descended on the area with bulldozers, gave residents a couple of minutes to get out, and proceeded to destroy everything in their path. One resident told me that when she resisted, and undercover police officer pulled a gun on her.

Jane (not her real name), said the police and Caltrans workers came at dawn and with little warning began scooping up the tents with the bulldozer and dumping them in garbage trucks. "What these people don’t understand," Jane said, "is that everything we own in the world is right here. All of our clothes, papers, everything is in the tent and they just threw it away." When the city of Fresno did this about two years ago, Indymedia reporters were there to record the attack. That report can be seen here: http://sfbay.indymedia.org/news/2004/02/1669522.php

Jane said she has been homeless and in this area for about five years. She said "if you don’t have a home and you can’t live on ‘public land’ (in this case land owned by the State of California) what are you supposed to do?" When Caltrans workers moved in last week to destroy these poor people’s homes, Jane said she was confronted by an aggressive undercover police officer who told her to get out. Jane asked the officer how she was doing and was told "better than you! At least I have a home." Jane said the officer was laughing at her and the plight of the homeless as the bulldozers moved in.

Jane and her friends grabbed their tent and tried to get it out of the path of the bulldozer. They were largely successful, except for a large gash she points to saying, "well, at least it is not raining this time of the year." About a week after the bulldozing, there were about 20 - 30 tents and other structures back on E street near Santa Clara.

Chuck (also not a real name) says he has only been there for about 4 or 5 days. Chuck has applied for disability and while he waits for his claim to get processed he has no income. He said "people should not judge you by the circumstances you find yourself in." He said he had a job until recently, but with a permanent leg disability, he has no way of making money. He is able to walk over to the Poverello House, with the help of a cane, for three meals a day, but that is about it.

The Poverello House has a "City of Hope" which consists of a handful of tool sheds where a couple of dozen people can spend the night. Down the street, the Rescue Mission has beds for a hundred or so homeless people. That leaves thousands of homeless on the streets of Fresno each night with nowhere to go.

Gloria Rodriguez, the Public Information Officer for Caltrans, told me that the homeless were in violation of Caltrans policy, they were illegal, and had to be removed. According to her it was a public safety issue. Jeff Cardinale, Public Information Officer for the FPD, said his department was just supporting Caltrans. At this time, it is not clear why the destruction of the homeless’s tents has started up again. It is also not clear what options the homeless have. They have to sleep somewhere, right? Chuck had a simple solution. He said "why can’t they just provide some temporary shelter while we sort out my disability? There is a huge open field down the street. Why don’t they just open that up for the homeless?" To suffer the pain of a debilitating injury, no home to live in, and now the prospect of having his tent destroyed, Chuck was a little frustrated. We agreed that anyone of us is just one or two incidents away from being homeless and their needs to be a solution that offers everyone dignity and respect. I told him I would try to figure out who is pushing for the destruction of these poor people’s shelters, see if there was anything that could be done to stop it, and would come back to document any further destruction, if it happened.

END_OF_DOCUMENT_TOKEN_TO_BE_REPLACED
§E Street and Santa Clara - the epicenter of the conflict
by Mike Rhodes (MikeRhodes [at] Comcast.net) 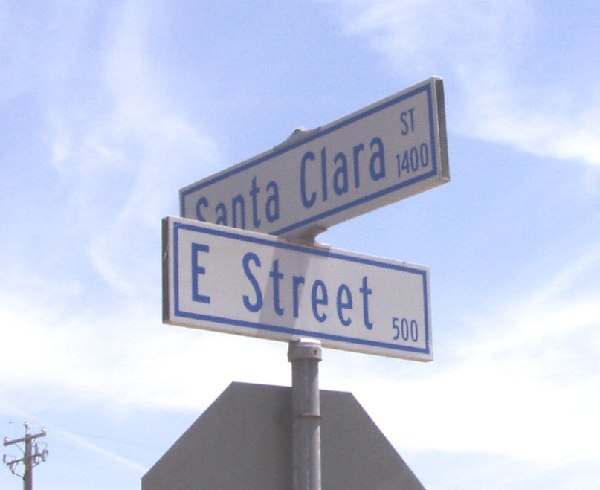 END_OF_DOCUMENT_TOKEN_TO_BE_REPLACED
§This tent is on Public Land
by Mike Rhodes (MikeRhodes [at] Comcast.net) 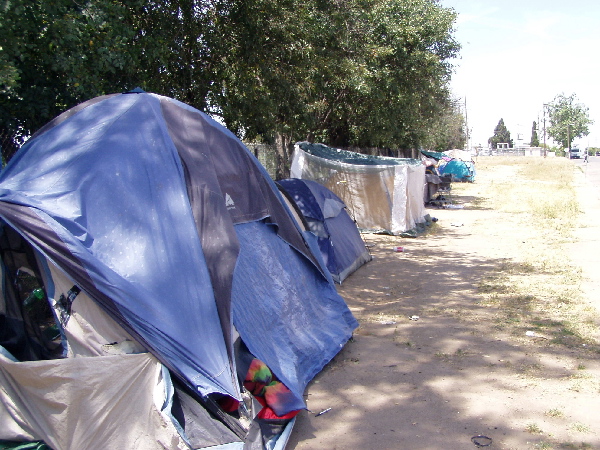 Whatever happened to the commons? All photos by Mike Rhodes
END_OF_DOCUMENT_TOKEN_TO_BE_REPLACED
Add Your Comments
Comments (Hide Comments)
§Attack on the homeless
by Bryan Apper (bryan.apper [at] sbcw.org)
I can't believe this has happened again. This demands a response. Perhaps there is an attorney out there who is willing to take on Caltrans and the city?
END_OF_DOCUMENT_TOKEN_TO_BE_REPLACED
Add a Comment
§if the pigs want to provoke a class war then we should oblige them their request.
by @
cops are an instrument of state repression against the poor and homeless; duh, we know that already. what we need to begin doing is organizing a militia to defend our communities again such attacks by the cops. we need to begin stratigizing, training, whatever it takes because the cops are text book sociopaths, that is, they don't care what manner of emotional distress they inflict on the poor and homeless so long as the interests of the state are protected.
Add a Comment
§Another strategy
by Josh (schilling1 [at] gmail.com)
If FPD is enjoying humiliating those most unfortunate among us, I propse we humiliate them publicly. In the Bee several years ago, while police chief Jerry Dyer was in the process of being inaugurated, there were articles detailing an alleged illegal affair he had with a minor. I believe the girl was 16 years old. In the article, Dyer did not admit explicitly to the affair (which is tantamount to statutory rape), but he did say that through much prayer, and through many discussions with his wife, he was able to become a better man. Believe me, anyone who read that quote understood that he had had sex with this minor. The Bee has an extended archive, and it would be easy to locate the original article/quote there, or in a public library with microfilm. I am currently living in Buenos Aires, and have no means to make and post fliers all over town detailing this, but believe me, if I was still in Fresno, I would take delight in putting them up everyehere. The man is a disgrace, and he should be so demonstrated.

Believe me, if you find the quotes they are so thinly veiled that anyone would come to the conclusion that he had sex with this girl. Someone should look them up... the dates were right around the time of his inauguration. Remind the community their chief to protect and serve is a statutory rapist. Maybe we should suggest he register himself as a sexual offender.

FPD is out of control, and I thank everyone in the community of Fresno fighting against them, for trying to provide a safer city for the young, the people of color, the poor, the liberal... the majority.

Peace... Josh
Add a Comment
§Ninth Circuit protects homeless
by Bryan Apper (bryan.apper [at] sbcw.org)
I have posted a pdf at http://www.sbcw.org of a Ninth Circuit April 14, 2006 decision that calls the citing homeless for sleeping on sidewalks/public right of way a violation of the Eighth Amendment (cruel and unusual punishment).
END_OF_DOCUMENT_TOKEN_TO_BE_REPLACED
Add a Comment
§Dyer's No-no
by lily b. (lilyban [at] sbcglobal.net)
God, do I agree! I don't live anywhere near Fresno, but if I did I would personally be out there making the city know what their representative was guilty of (apparently by his own admission) all I can say is "peace, and love your neighbor, who knows, even me or you could end up homeless, if you think about it you'd be surprised at how close you really are!lily b.
Add a Comment
Support Independent Media
We are 100% volunteer and depend on your participation to sustain our efforts!