by de.indymedia.org
This is an assembled list of articles on German indymedia with lots of photos of various Mai tag protests. With most of them, you can easily follow along, or press translate. 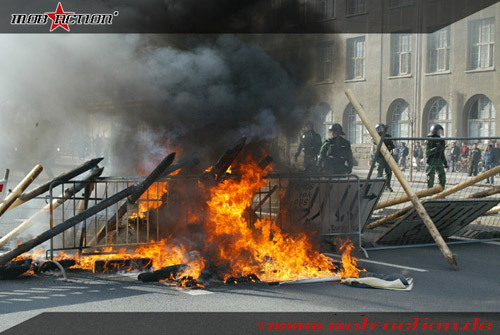 Before the Soviet Era, Mayday was a pre-christian pagan holiday called Walpurgisnacht which involves lots of celebrating and wild dancing. During the industrial era, like in the U.S., it became a labor holiday. During the cold war, the east bloc took it over and it became known for forced attendance worker parades. Post-cold war, the autonomen and other non-socialist groups have taken it back somewhat. Major cities including Berlin have had really dramatic anarchist and anti-fascist demonstrations involving lots of police water cannons, throwing of cobblestones, etc. In France, burning cars is culturally popular for some reason.

The american TV perception of Germany in 2006 sometimes involves a lot of false perceptions that no progress has occurred since 1946. This isn't true. They have put a tremendous amount of effort into culture change, and most people take a very serious interest in politics, international affairs, and class relations (for instance, someone posted the link to the Stephen Colbert correspondents dinner where he managed to deeply embarrass Bush, and someone else was saying that this was too banal and irrelevant to put on a political site... yet this is all that the DailyKOS democrats are talking about on May 1st, when we have local demonstrations etc.). That said, there is a nazi problem in Germany in certain eastern cities. The country has 10% unemployment, and the eastern cities of Magdeburg, Rostock, and Leipzig have more like 25% unemployment, and people are moving out like Oklahoma in the 1930s. This is where some nazis are sticking their heads up, and really troubling the antifa folks who have to organize to oppose them.
As you can see with the photos of burning barricades, violence (not including shootings) seems to come up more often in Germany. Nazis and antifas can do things like throw incendiary devices at each other's buildings, and there is not the tone of peaceful protest like the U.S. typically has.

Half a million people are reported to have participated in Mayday events around the country.

Indymedia is not yet showing particularly wild chaos demo in Berlin like normal, but a few scattered incidents that made the papers. This seems to show that a high police presence brought in initial 'troublemakers' such as this guy who damaged a bank, and then not too much developed later. 71 people were arrested http://de.indymedia.org/2006/05/145183.shtml
However, when you go to news.yahoo, they have some additional photos of the annual bottle throwing, dumpster burning tradition in Kreuzberg district of Berlin:
http://news.search.yahoo.com/news/search?p=berlin+may+&c=news_photos

A failure for antifascists. 300 nazis marching in Leipzig without enough counterdemonstrators. Note the neatly printed banners.
http://de.indymedia.org/2006/05/145263.shtml
Big burning barricade set up to stop nazis in Leipzig. This is about the most exciting thing on the newswire today.
http://de.indymedia.org/2006/05/145284.shtml
Antinazi t-shirts for sale
http://www.mob-action.de/ 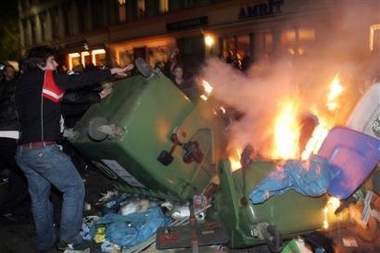 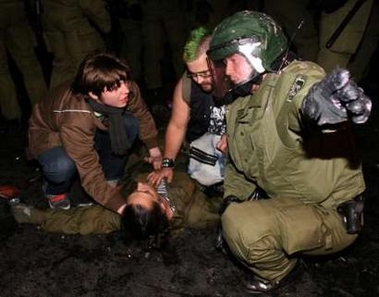 §punks dancing by fire
by de.indymedia.org 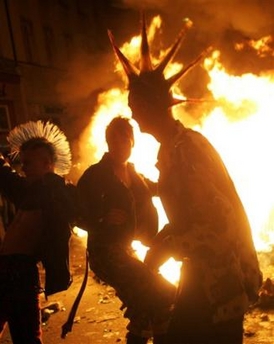