Israel cannot be criticized (by Latuff) 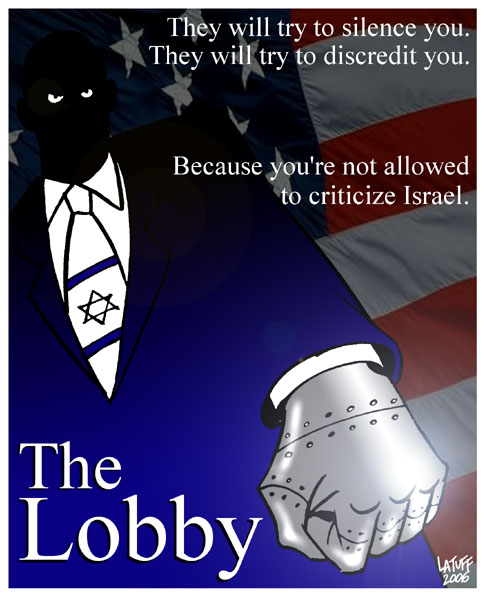 "Right now, this has become a subject that you can barely talk about without people immediately trying to silence you, immediately trying to discredit you in various ways, such that no American politicians will touch this, which is quite remarkable when you consider how much Americans argue about every other controversial political issue. To me, this is a national security priority for us, and we ought to be having an open debate on it, not one where only one side is being heard from."

Read "Ferment Over 'The Israel Lobby'" by Philip Weiss (The Nation): http://www.normanfinkelstein.com/article.php?pg=11&ar=201
END_OF_DOCUMENT_TOKEN_TO_BE_REPLACED
Related Categories: Palestine | U.S.
Add Your Comments
Latest Comments
Listed below are the latest comments about this post.
These comments are submitted anonymously by website visitors.
TITLE
AUTHOR
DATE
Some Israelis have the courage to speak up
rather than remain silent
Amazing how the zionist fanatics futily attempt to shout critics of Israel down
Not here skippy.
You know the art is good when they get real angry
good job Latuff
Here's a good website for the pro-israel troll
learn to think
nOTICE HOW THE RABID PRO-ISRAEL TROLLS ALWAYS YELL 'ANTISEMITISM'
ZIONISM IS RACISM
Correction to "TH"
Not true
Denial
TH
Good link to a great book
Check it out
Robert Fisk rocks--check out this site for some alternative views
Not mainstream
Thanks for the links--I'm saving them to read--they look interesting
I'll check them out
Support Independent Media
We are 100% volunteer and depend on your participation to sustain our efforts!