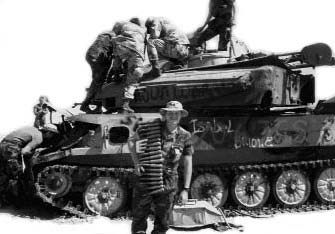 
I am neither a scientist nor a writer of fiction, but the notion that a government would knowingly dust human beings with radioactive heavy metal powder or place them in toxic zones without warning resembles a science fiction nightmare come true. Yet this is just what the Department of Defense (DOD) is doing. Prioritizing weapon strength over long-term health and environmental considerations, the U.S. is using material that has poisoned our own troops, dumped thousands of tons of this toxic waste at home and abroad, and broken international law in the process. Meanwhile, the controversial nature of this material has led the U.S. government to deny its devastating side effects and long-term consequences. The substance is a heavy metal radioactive material called Uranium 238 (U-238), also known as Depleted Uranium or DU.

The word “depleted” is a misnomer. U238 is made as a byproduct of the uranium enrichment process. When natural uranium is enriched, less than one percent of what is produced is used by nuclear power plants or conventional fissionable weapons. Once “depleted” of the usable material, the 99 percent that is leftover is called DU. It is still approximately half as radioactive as natural uranium with a half-life of over 4 billion years. Reports also indicate that small amounts of other, more radioactive isotopes are also present in this waste, which is very expensive if the industry is to handle it according to regulations.
It seems the idea to first use this radiological waste in military operations was the brainchild of the Manhattan Project. The “Groves Memo,” written in 1943, describes the potential for “radioactive gas” to be used as a lethal weapon. It also warned that the substance should not come in contact with our soldiers. So if you want to buy the Bay Bridge, you can also buy the story now being told by the DOD that DU won’t harm you.

On September 29, 2004, the New York Daily News reported that many of the 442nd Military Police, a National Guard unit, returned home sick after four months in Samawah, Iraq. Frustrated with the way the military was handling their concerns, they went to the press. There they found a voice in Juan Gonzales, and the New York Daily News paid for them to be properly tested through Dr. Durakovic, the director of Uranium Medical Research Center (UMRC). Previously, he was the chief of Nuclear Medicine at the VA in Maryland until his reports on DU were no longer acceptable. Several of the vets tested positive for Depleted Uranium heavy metal poisoning and Gerard Matthew had even fathered a daughter with a birth deformity.

The only other mainstream investigative media coverage was in December 2004, when Vanity Fair published a comprehensive article on Depleted Uranium, “Weapons of Self-Destruction,” by David Rose. In this article, Staff Sergeant Raymond Ramos is described as a physically fit former-New York City cop who began to suffer from constant headaches, fatigue, urinary problems, respiratory difficulties, and even sleep apnea after being stationed on a makeshift base in Iraq where fierce tank battles had taken place. In the article, Rose explains that these are the same symptoms that have been reported in soldiers returning from the First Gulf War and the Kosovo War, labeled Gulf War Syndrome and Balkans Syndrome respectively, diseases that many scientists now attribute to DU.

Then in February 2005, Arthur Bernklau, Executive Director of Veterans for Constitutional Law in New York, reported a little known VA statistic that of the 580,400 soldiers in the First Gulf War, 11,000 are now dead and 325,000 were on permanent disability as of the year 2000. This means that 56 percent of the returning veterans have permanent medical problems in contrast to 10 percent in Vietnam. DU is worse than Agent Orange! Where is the Outrage?!

Almost twice as dense as lead, DU is used in the ballasts of some commercial planes for balance and in protective armor plating on Abrams Tanks. Placed as solid cores in the tips of bombs and bullets, DU greatly enhances penetrating ability. It is also pyrophoric, which means the friction created when it is deployed will cause it to spontaneously combust, burning and releasing micron-size isotopes that can be inhaled or ingested. According to the “Wakayama Report” by Army Colonel and physician Junro Wakayama, these particles can lodge in your body, emitting radiation and heavy metal toxins that compromise your immune system and can cause neurological or organ damage, cancers, and genetic mutations. Several thousand tons have been dispersed all over the Gulf, Afghanistan, Yugoslavia, Bosnia, and elsewhere in our recent military operations, in addition to all the areas where it has been mined, manufactured, and tested in the past decades.

The National Lead Industry in Albany, New York, used to manufacture DU weapons in the 70’s. During that time, they would throw the leftover shavings in their chimney fires. This unorthodox and unregulated gross mishandling of DU and other chemicals finally led to their closure in 1984. The Department of Defense has been in charge of site remediation and the cleanup of as many as 56 neighboring properties at a cost to date of over $155 million. For twenty years, an active neighborhood group has been vigilant and pursuing compensation for health effects they believe are the consequences of NL practices.

Many Naval facilities, such as the San Francisco Naval Shipyard at Hunters Point, whole islands, like Vieques, Puerto Rico, and most recently Schofields Barracks, an Army base in Hawaii, have become playgrounds for the Military to conduct experiments and dump their waste. According to a study by the Puerto Rican Health Department for 1990-1994, the cancer rate at Vieques was 27 percent above Puerto Rico’s average.

In 2003, I heard Major Doug Rokke speak at a community center. Commissioned by the military, he established a DU protocol, Army Regulation 700-48. Yet, he continues to tell us, the protocol is being dutifully ignored. My first reaction to Rokke’s words was disbelief, which later turned to anger the more I understood the issue. Many members of Rokke’s DU cleanup crew have since died. Like so many soldiers, they were initially unaware of what they had been exposed to.

Since this meeting, with great sorrow I began to show everyone, including my congressman, Maurice Hinchey, pictures from http://www.idust.net of sick children with birth deformities. To raise attention about DU concerns on a federal level, a proposal has been made with the support of Congressman Hinchey to sponsor a press conference and briefing in Washington on DU. Hinchey is waiting for the right moment and a popular groundswell from others across the country to ignite a fire under their Representatives. So, if you are moved to take some action, let’s ignite some fires. Call your Representatives and the Progressive Caucus and let them know that you want Congress to break the silence on DU and hold a press conference and briefing.

The latest initiative is to get a DU Bill passed in every state. Louisiana and Connecticut have already done so and others are following. Since they have jurisdiction over their National Guard, these states are passing a bill that establishes a task force and protocol to register, “properly” test, and help provide medical care to those in the National Guard who are concerned that they have been exposed to toxins and DU. Assemblyman Jeffrey Dinowitz is introducing a similar bill in New York this February. Thinking globally, acting locally still works.

Other nations, such as the UK, France, and Russia, have purchased DU weapons. The European Parliament has called for a moratorium on all DU munitions. San Francisco-based international lawyer Karen Parker has addressed the UN and is quick to point out that DU will continue to indiscriminately affect people and the environment for generations to come. These “dirty bombs” have been pronounced illegal and criminal and are already outlawed by international standards.

For those who feel that none of this affects them: the World Health Organization announced global cancer will increase 50 percent by 2020. In the words of Chief Seattle, “All things share the same breath—the beast, the tree, the man...the air shares its spirit with all life it supports.” Let’s expose DU as the omnicidal killer that it is and stop this criminal nuclear nightmare!

In Peace and Hope,