Add an Event
Newswire
Calendar
Features
Home
Donate
From the Open-Publishing Calendar
From the Open-Publishing Newswire
Indybay Feature
Publish to Newswire
Add an Event
Related Categories: Santa Cruz Indymedia | Anti-War | Education & Student Activism
Military Recruiters Evicted From UCSC Job Fair, Again!
by ~Bradley (bradley [at] riseup.net)
Tuesday Apr 11th, 2006 7:33 PM
On April 11th, 2006, about 200 students marched and rallied to get the military out of UC Santa Cruz. Students rallied outside the McHenry Library before marching to the Job Fair held at College 8. This is the third time in a row that the military has been confronted by large student demonstrations while trying to recruit at UCSC Job Fairs. 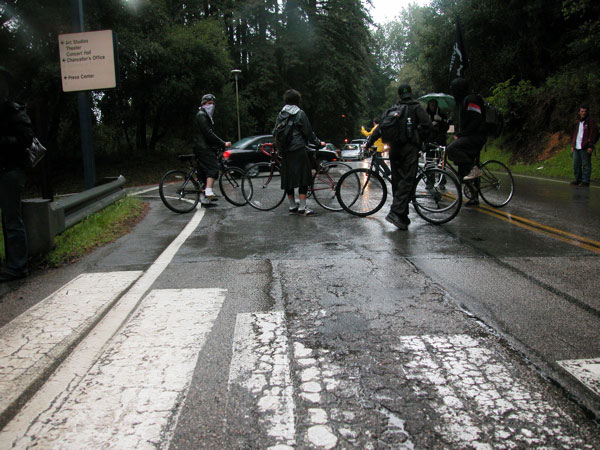 Above: Bikers Bloc the road to prevent cars from hurting students 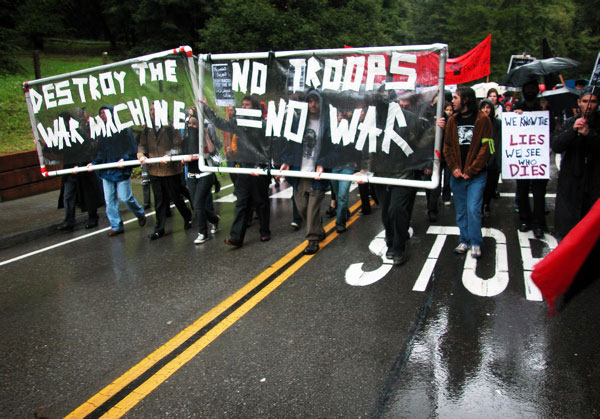 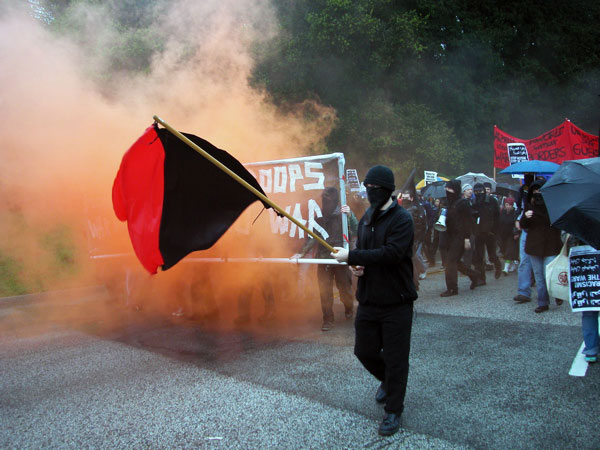 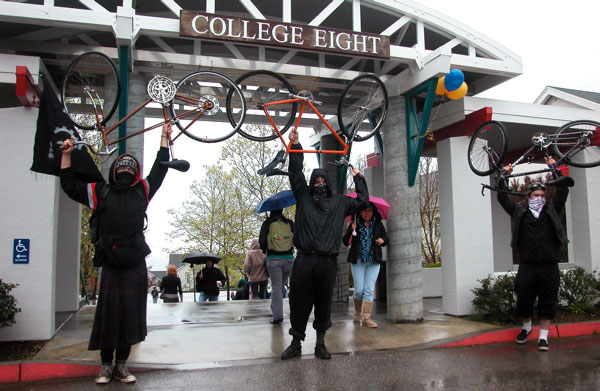 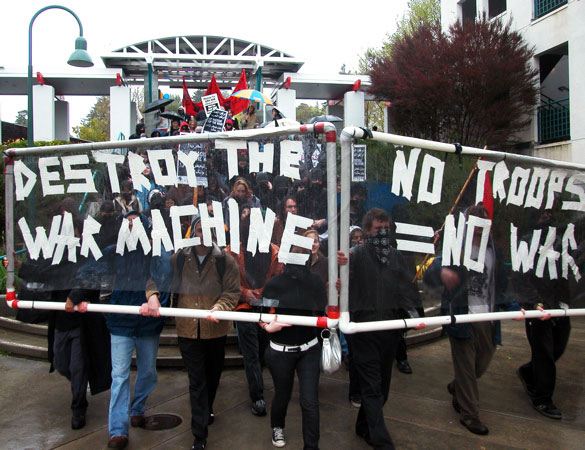 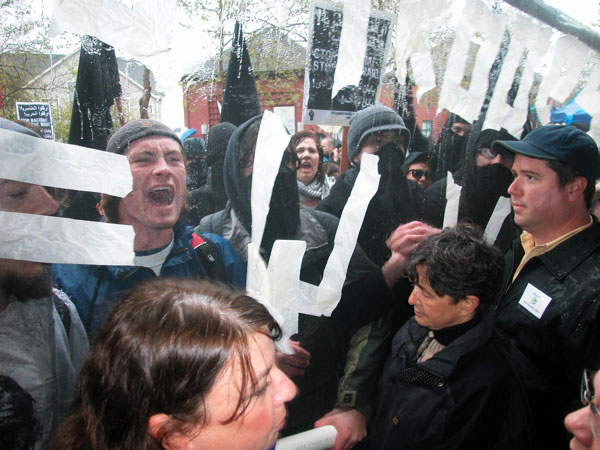 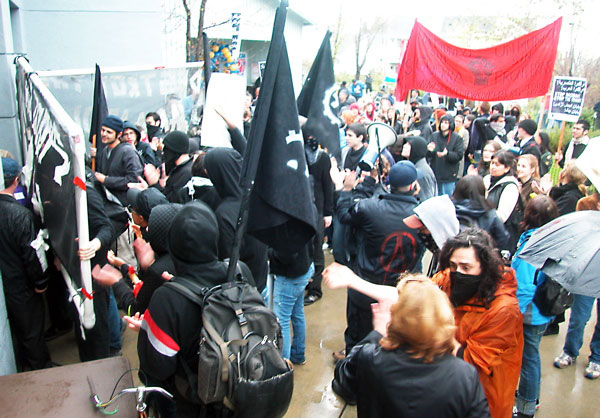 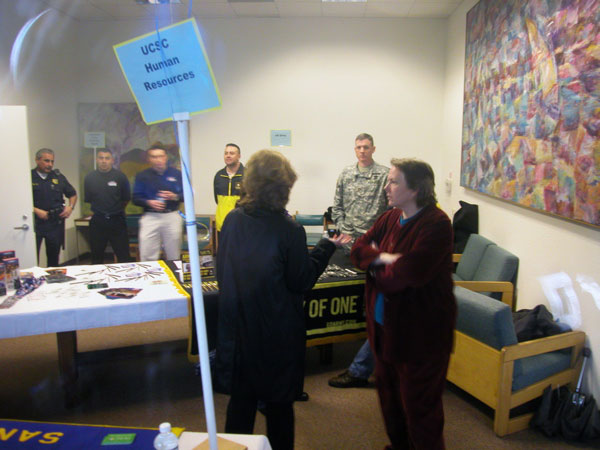 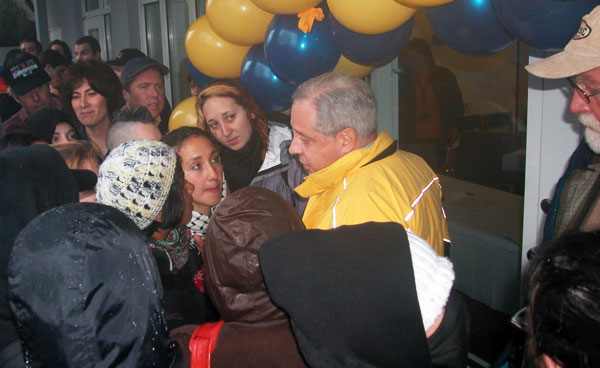 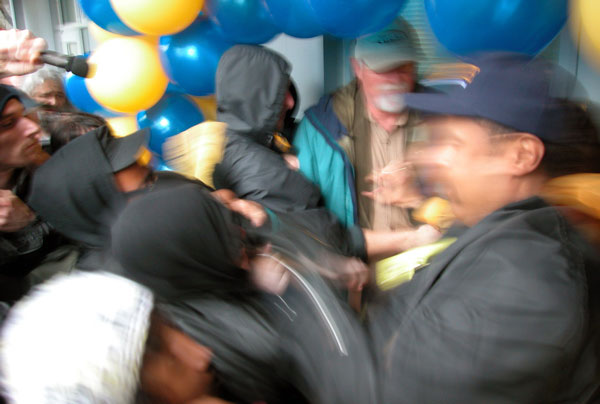 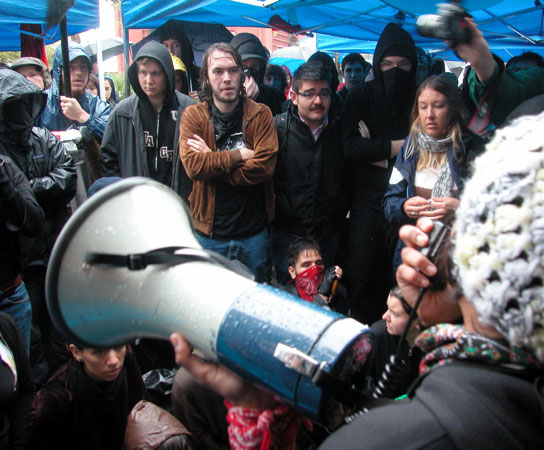 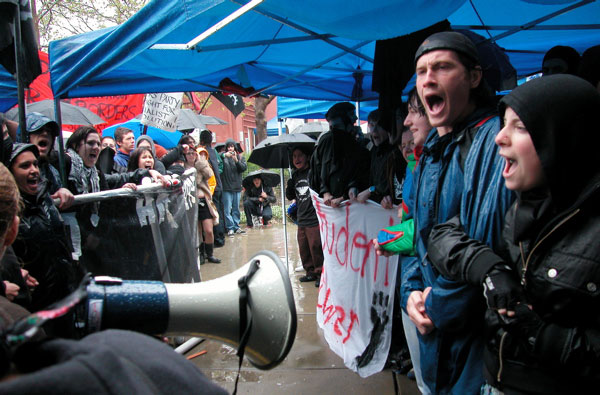 Students made a pathway which military recruiters said they needed so they could leave the Job Fair. But this was a lie, like most statements made by the military. They did not need a pathway and instead left the Job Fair by walking alongside the building.
§SAW Legal Observer Arrested While Filming A Cop
by ~Bradley (bradley [at] riseup.net) Tuesday Apr 11th, 2006 7:33 PM 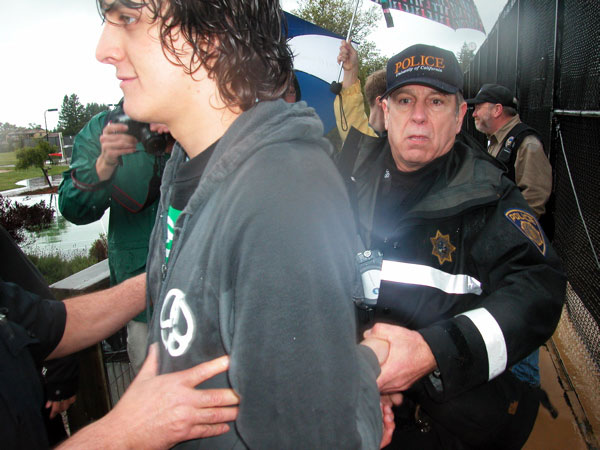 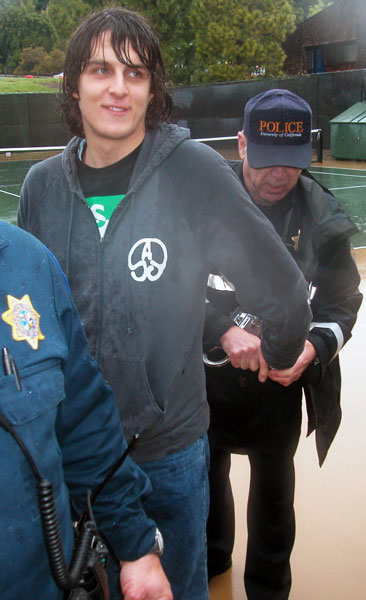 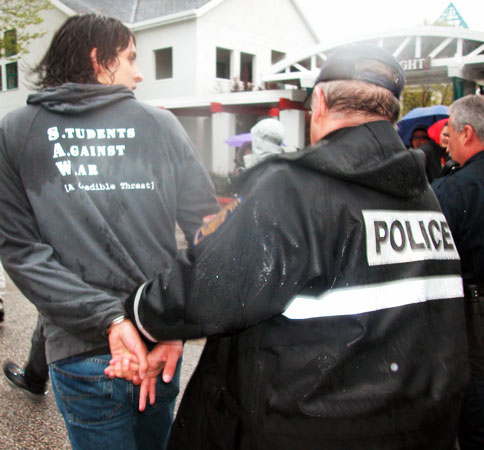 §Students Surround the Classroom and Demand the Release of the Arrestee
by ~Bradley (bradley [at] riseup.net) Tuesday Apr 11th, 2006 7:33 PM 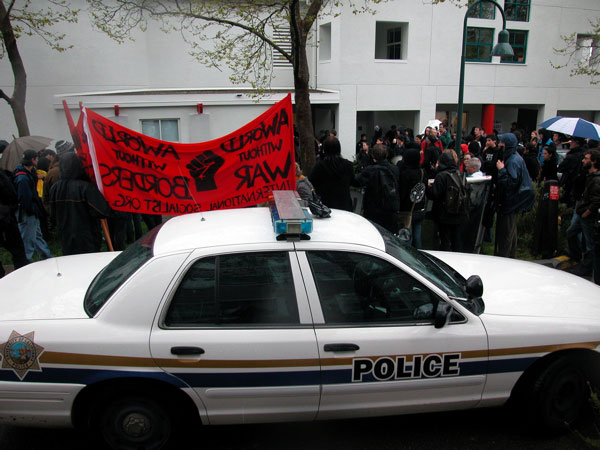 * After arresting a legal observer for filming, the police took the arrestee and questioned him inside a classroom at College 8.
§Released and Speaking to Students Waiting in Solidarity
by ~Bradley (bradley [at] riseup.net) Tuesday Apr 11th, 2006 7:33 PM 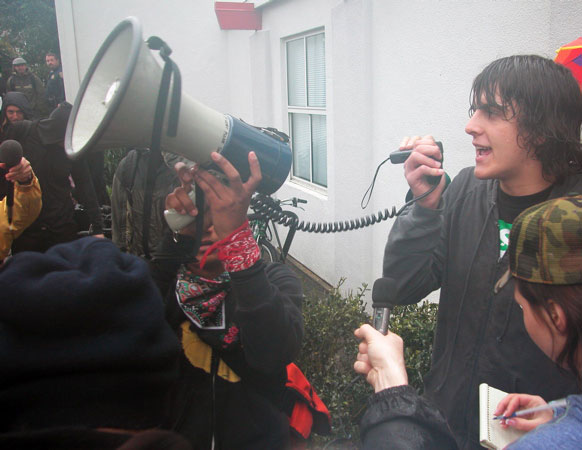 Although Kot was released after being arrested, he was searched, questioned (without a lawyer present) and told that he would be facing charges and hearing from the District Attorney...
§We Know The Lies, We See Who Dies
by ~Bradley (bradley [at] riseup.net) Tuesday Apr 11th, 2006 7:33 PM 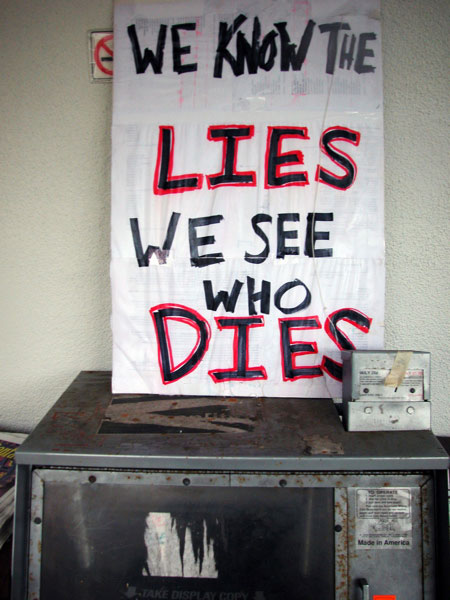 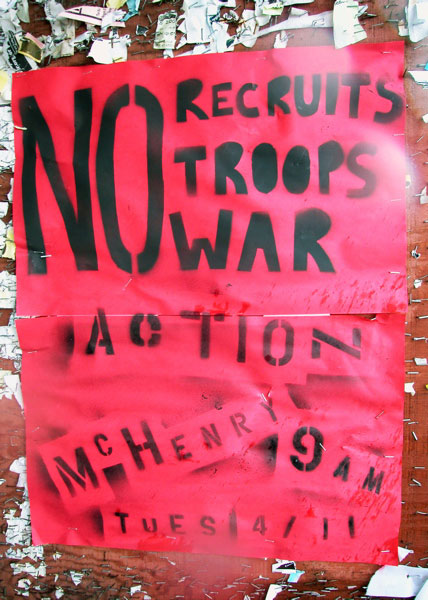 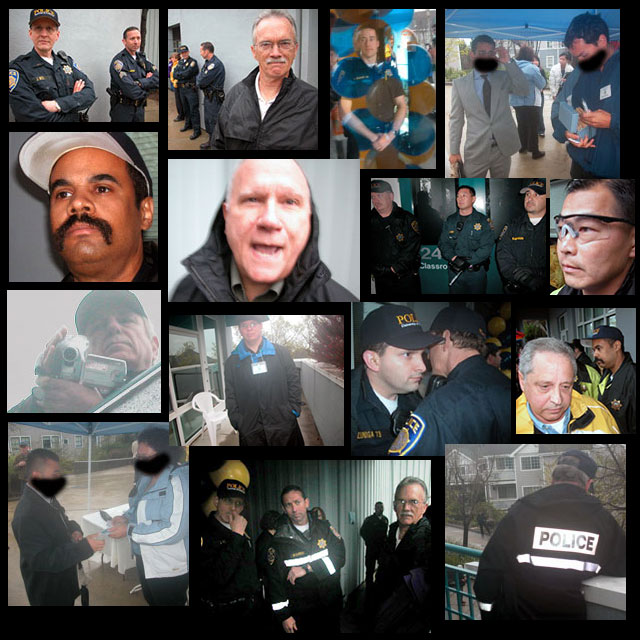 1.
1. The power to enforce laws, exact obedience, command, determine, or judge.
2. One that is invested with this power, especially a government or body of government officials: land titles issued by the civil authority.
2. Power assigned to another; authorization: Deputies were given authority to make arrests.
3. A public agency or corporation with administrative powers in a specified field: a city transit authority.
4.
1. An accepted source of expert information or advice: a noted authority on birds; a reference book often cited as an authority.
2. A quotation or citation from such a source: biblical authorities for a moral argument.
5. Justification; grounds: On what authority do you make such a claim?
6. A conclusive statement or decision that may be taken as a guide or precedent.
7. Power to influence or persuade resulting from knowledge or experience: political observers who acquire authority with age.
8. Confidence derived from experience or practice; firm self-assurance: played the sonata with authority.

[Middle English auctorite, from Old French autorite, from Latin auctōritās, auctōritāt-, from auctor, creator. See author.]
Add Your Comments
LATEST COMMENTS ABOUT THIS ARTICLE
Listed below are the latest comments about this post.
These comments are submitted anonymously by website visitors.