Add an Event
Newswire
Calendar
Features
Home
Donate
From the Open-Publishing Calendar
From the Open-Publishing Newswire
Indybay Feature
Publish to Newswire
Add an Event
Related Categories: San Francisco | Immigrant Rights
Thousands in SF March for Immigrant Justice
by Jeff Paterson, Not in Our Name (jeff [at] paterson.net)
Monday Apr 10th, 2006 9:35 PM
San Francisco, California (April 10, 2006) – About five thousand people marched this evening through San Francisco’s Mission District in support of immigrant rights. From 16th Street to 24th Street, thousands of immigrant workers, families, youth, and supporters marched down the middle of Mission Street. This was only one of hundreds of actions today being held under the “National Day of Action for Immigrant Justice” banner (http://www.april10.org). 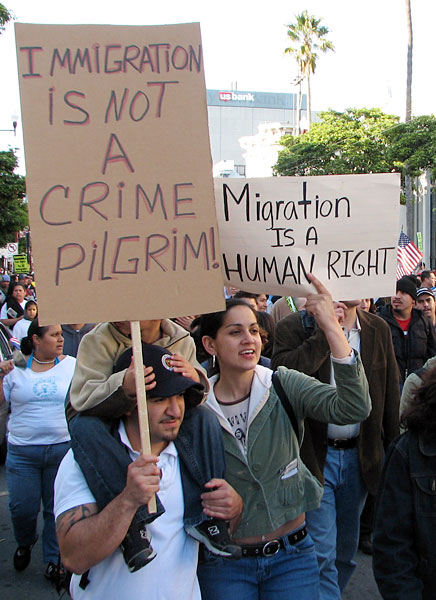 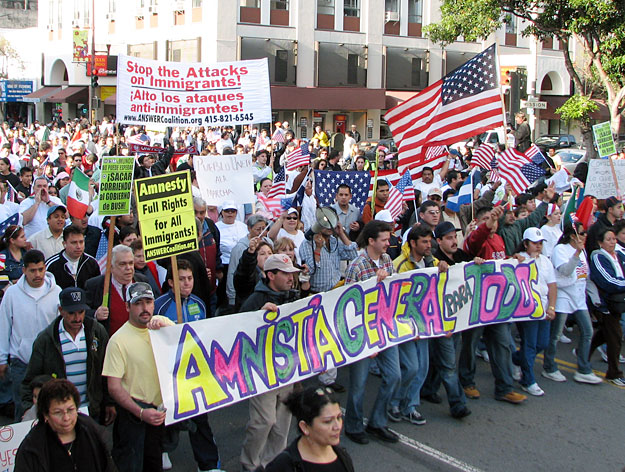 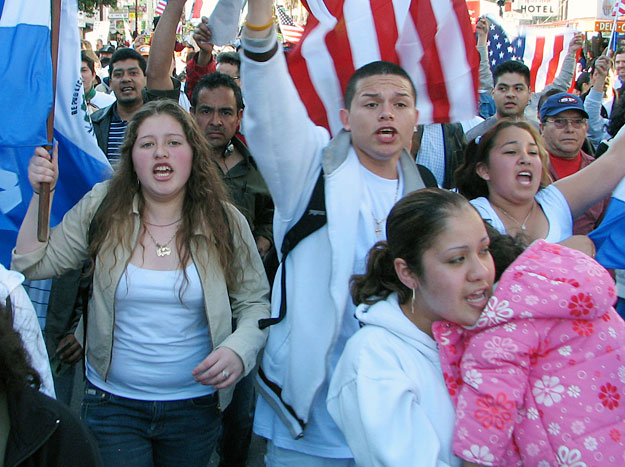 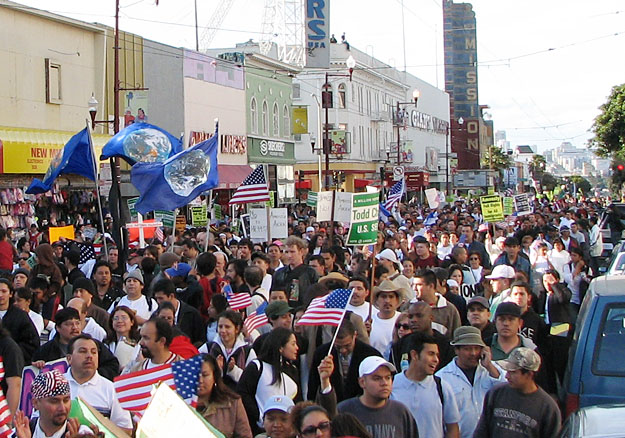 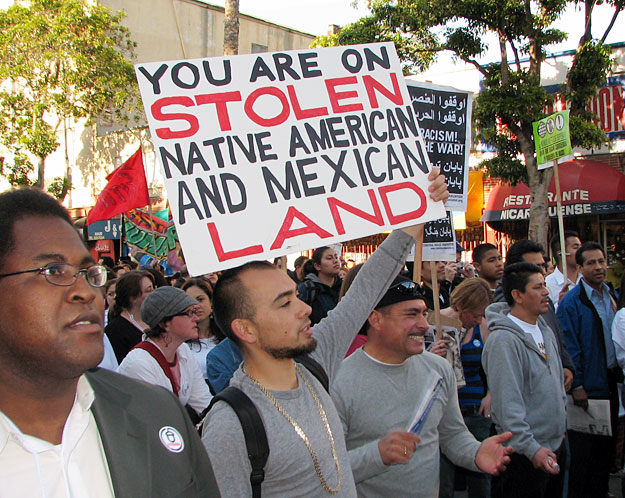 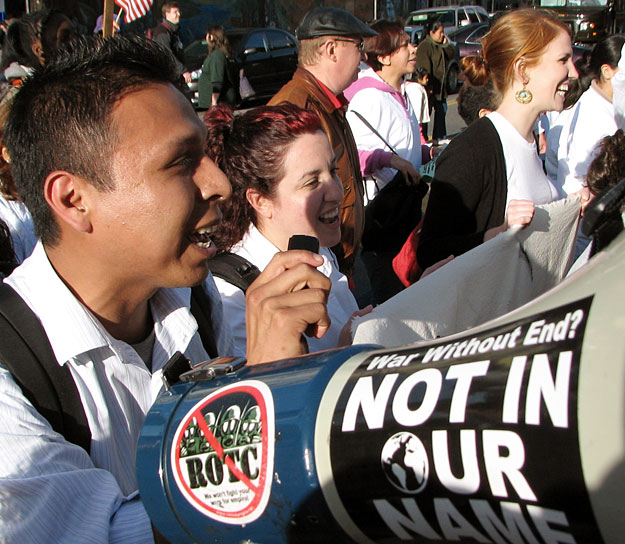 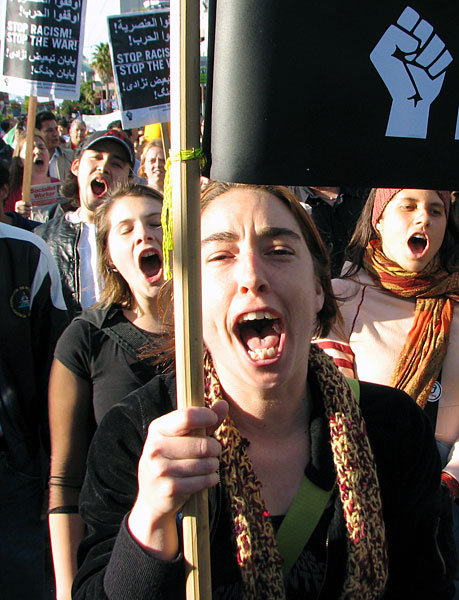 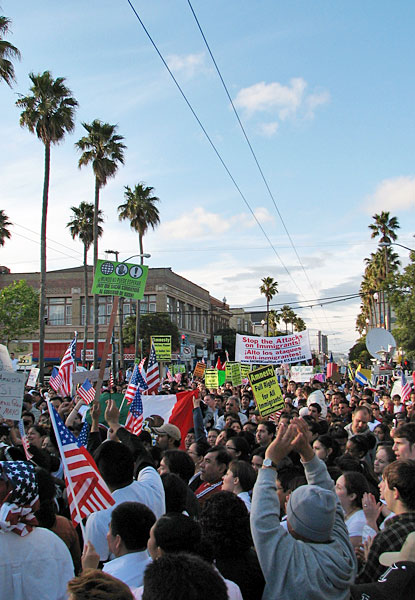 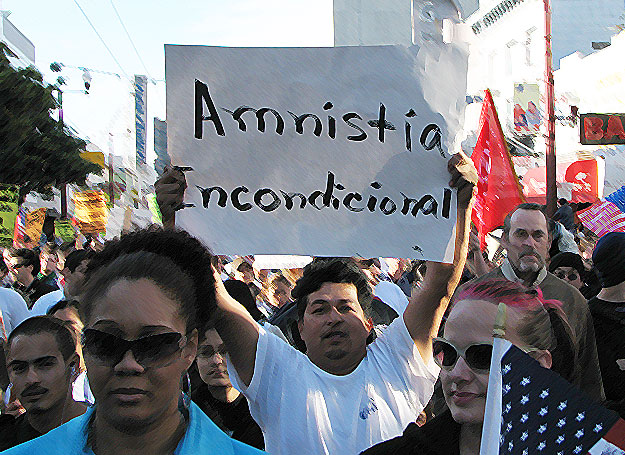 http://www.notinourname.net
§&quot;European Descendants for Immigrant Justice!&quot;
by Jeff Paterson, Not in Our Name (jeff [at] paterson.net) Monday Apr 10th, 2006 9:35 PM 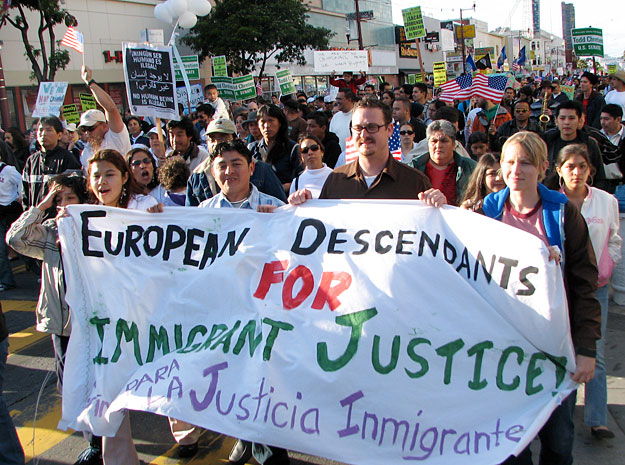 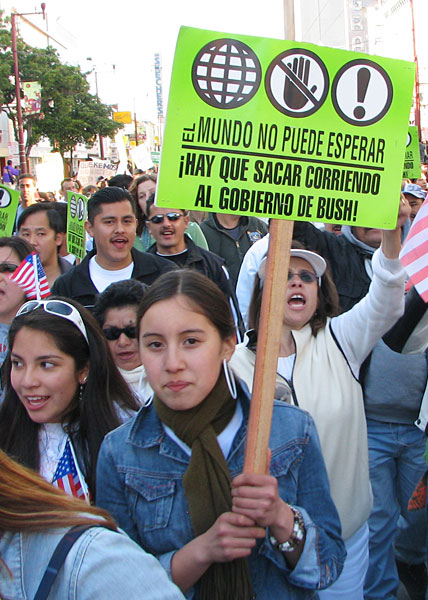 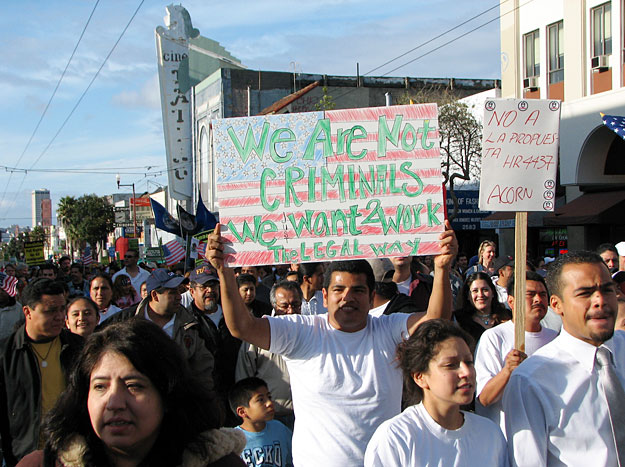 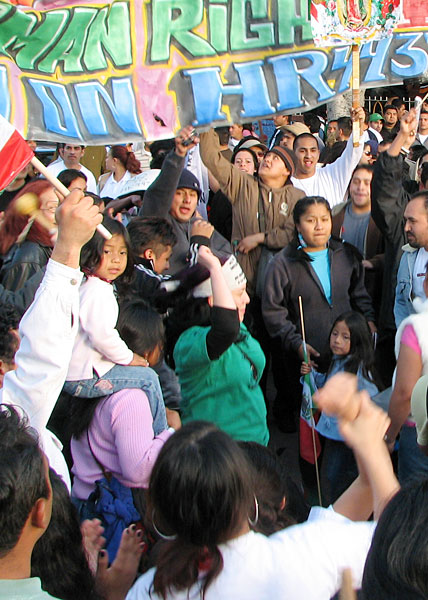 §We need a weekend march: April 23 still on?
by (
Tuesday Apr 11th, 2006 6:41 AM
We need a weekend march which hopefully will take place on Sunday, April 23. Then you will see a large percentage of the 7 million people in the Bay Area marching for immigrants. If anyone has information on the April 23 march, please post it here and on the calendar. San Francisco can outdo much of the nation if we have it on a weekend, as Dallas did this past weekend.
§April 23 SF Immigrant March Information
by (
Tuesday Apr 11th, 2006 7:02 AM
From: http://www.indybay.org/calendar/event_display_detail.php?event_id=9427
Contact: 510-839-7598 , Sheila Chung, Bay Area Immigrant Rights Coalition

Community organizations, labor, students, and faith-based groups are organizing the Bay Area's largest mobilization for immigrant rights on Sunday, April 23. Join us and bring your friends and family!

ABOUT THE ANTI-IMMIGRANT BILLS
On December 16th, the US House of Representatives passed the “Border Protection, Anti-Terrorism, and Illegal Immigration Control Act” - HR 4437, one of the most egregious anti-immigrant bills in recent times. Introduced by James Sensenbrenner (R-WI), HR 4437 promises to erode judicial review, expand the definition of an aggravated felony, criminalize U.S. citizens and legal residents who have routine contact with undocumented immigrants, and increase the potential for employer discrimination and abuse of workers. The House vote was 239 to 182. Following the House vote, debate on the bill moved to the Senate.

On February 24, 2006, advocates in Washington, D.C. obtained a copy of the revised “Chairman’s Mark” - the immigration reform legislation that served as the starting point for the Senate Judiciary Committee’s consideration of comprehensive immigration reform. Introduced by Senator Arlen Specter (R-PA), Chair of the Senate Judiciary Committee, the bill was a huge disappointment: it incorporated many of the enforcement provisions from the House bill (the Sensenbrenner bill).

The Senate Judiciary Committee began "marking up" the bill in early March, introducing amendments that stripped the bill of a couple provisions: criminalizing immigrants for being unlawfully present in the U.S. and criminalizing those who assist, employ and have contact with undocumented immigrants. The Senate Judiciary Committee, however, left horrible provisions in place (e.g. doubling the number of border patrol agents, calling for expedited removal without court hearing, expanding the definition of aggravated felony) and even added other misguided provisions (e.g. restrictions that whittle away who would be eligible to apply for legal permanent residency). The Senate bill, in its current form, is far from true immigration reform.

Debate on the bill continues on the Senate floor where Senators are introducing numerous amendments -- most of them just as damaging as those we've already seen. On Thursday, April 6, the Senate was scheduled to vote on whether to end debate on the bill and consider remaining amendments, but the vote was postponed. The Senate is currently on a two week break, and will possibly vote on the bill when they return, on Monday the 24th of April.
If the Senate bill moves to conference committee, where members of the House and Senate would attempt to reconcile their two bills and where extremist legislators have control, we anticipate that members of that committee will produce a devastating immigration bill that undermines the human and civil rights of immigrants.

Throwing a wrench into the mix is Senator Bill Frist, the Senate majority leader clamoring to run for President in 2008. Senator Frist introduced his own enforcement-only bill on the Senate floor in late-March, completely bypassing debate of his bill in the Senate Judiciary Committee. On Thursday, April 6, the Senate will also vote on whether to end debate on the Frist bill and consider remaining amendments.

For more info on actions and current info on bill: http://www.immigrantrights.org
http://www.indybay.org/calendar/event_disp...
Support Independent Media
We are 100% volunteer and depend on your participation to sustain our efforts!