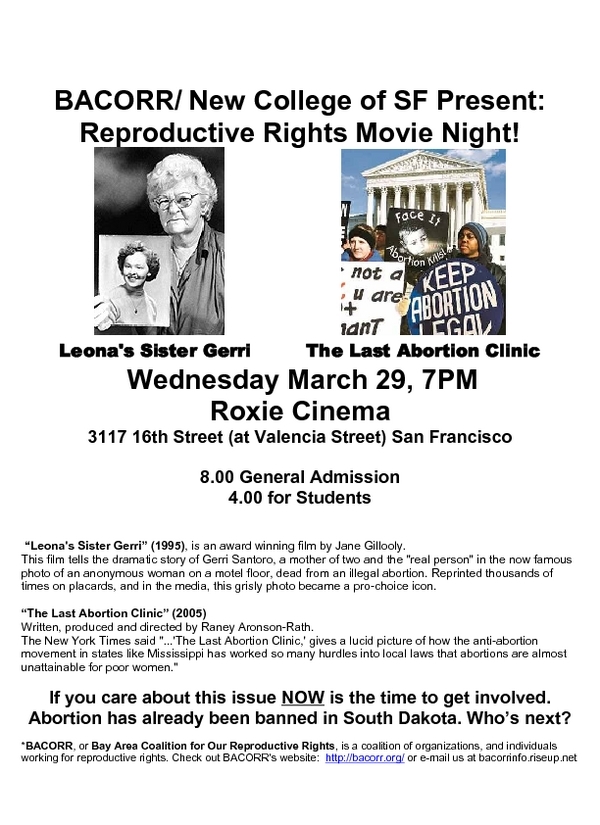 “Leona's Sister Gerri” (1995), is an award winning film by Jane Gillooly.
This film tells the dramatic story of Gerri Santoro, a mother of two and the "real person" in the now famous photo of an anonymous woman on a motel floor, dead from an illegal abortion. Reprinted thousands of times on placards, and in the media, this grisly photo became a pro-choice icon.

“The Last Abortion Clinic” (2005)
Written, produced and directed by Raney Aronson-Rath.
The New York Times said "...'The Last Abortion Clinic,' gives a lucid picture of how the anti-abortion movement in states like Mississippi has worked so many hurdles into local laws that abortions are almost unattainable for poor women."

If you care about this issue NOW is the time to get involved.
Abortion has already been banned in South Dakota. Who’s next?

*BACORR, or Bay Area Coalition for Our Reproductive Rights, is a coalition of organizations, and individuals working for reproductive rights. Check out BACORR's website: http://bacorr.org/ or e-mail us at bacorrinfo at riseup.net
Add Your Comments
LATEST COMMENTS ABOUT THIS ARTICLE
Listed below are the latest comments about this post.
These comments are submitted anonymously by website visitors.