Add an Event
Newswire
Calendar
Features
Home
Donate
From the Open-Publishing Calendar
From the Open-Publishing Newswire
Indybay Feature
Publish to Newswire
Add an Event
Related Categories: San Francisco | Anti-War
Venezuelan Labor Leader Speaks at SF Antiwar Rally
by Hands Off Venezuela--San Francisco Bay Area (sfbay [at] ushov.org)
Sunday Mar 19th, 2006 11:44 AM
Luis Primo is a central leader of the Venezuelan National Union of Workers (UNT), the new labor federation in Venezuela which has replaced its corrupt predecessor which supported the U.S.-backed attempted coup against President Chavez. Luis Primo addressed the antiwar rally sponsored by ANSWER on Saturday, March 18 and will speak at a public meeting on Saturday, March 25. 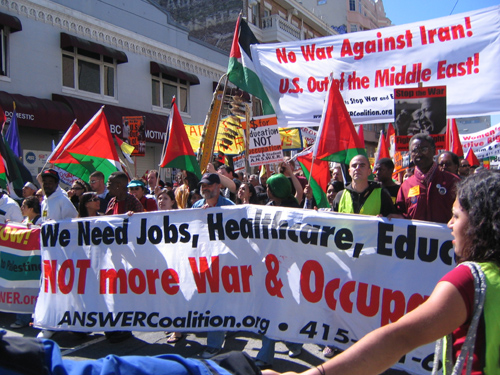 A report on the first day of Luis Primo's West Coast tour.

On March 18, 25,000 people participated in what is reported to have been the country's largest anti-war demonstration. Trade union leader Luis Primo (UNT), in the US for a tour of the west coast, was invited by the demonstration organizers to march at the head of the procession and to speak at the post-march rally.

The energetic march extended for several blocks with anti-war, anti-imperialist and pro-worker chants the main theme of the day. "Money for New Orleans, not for war" was a particularly popular chant. Other chants taken up by the thousands of marchers included "el pueblo unido, jamas sera vencido" and "uh, ah, Chavez no se va!"

After the march, thousands of people gathered to hear several speeches. Vernon Bellcourt and other veterans of the American Indian Movement, grassroots New Orleans activist Malik Rahim, and others were followed by Luis Primo, as representative of the Venezuelan National Union of Workers (UNT).

His speech focused on the successes of the Bolivarian Revolution, the danger of imperialist intervention in Venezuela, the importance of the anti-war movement as part of a broader movement for the liberation of humanity, and on the Bolivarian revolutionary process in which working people and the whole of Venezuelan society are participating directly. He was greeted with several rounds of applause, in particular when he confronted US imperialism saying, "Hands Off Venezuela!"

He concluded with words of Jose Felix Ribas: "we cannot choose between winning or dying - it is necessary that we win."

Earlier in the day, Primo was contacted by telephone for an interview with Radio Nacional de Venezuela (RNV), during which he explained the purpose of his US tour and the importance of the day's anti-war demonstration.

The Hands Off Venezuela Campaign was present throughout the day on this first event of Primo's multi-city tour. There was a constant stream of visitors discussing the processes taking place in Venezuela, dozens signed up for more information. The many groups and individuals working with San Francisco HOV have been instrumental in the organization of Primo's West Coast tour, and we look forward to continuing to build HOV in the Bay Area and around the country.

Luis Primo will be back in San Francisco on March 25 for a 7 pm speaking engagement at ILWU Local 34 Hall, 4 Berry St. (Located at the corner of Embarcadero and 2nd Street, next door to SBC Park. MUNI: Take “N” line toward SBC Park. His next stop is Portland, OR on Sunday, March 19. Click here for the full tour calendar: 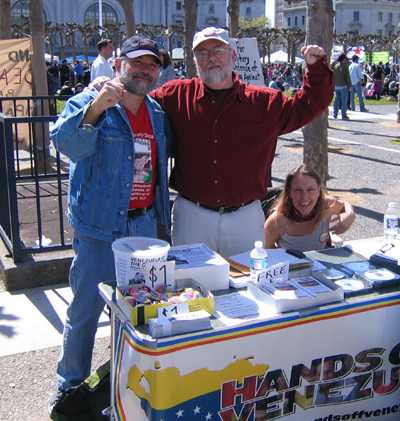 http://www.ushov.org
Add Your Comments
Support Independent Media
We are 100% volunteer and depend on your participation to sustain our efforts!