Add an Event
Newswire
Calendar
Features
Home
Donate
From the Open-Publishing Calendar
From the Open-Publishing Newswire
Indybay Feature
Publish to Newswire
Add an Event
Related Categories: Central Valley | Anti-War
Rally in the Valley
by Mike Rhodes (MikeRhodes [at] Comcast.net)
Saturday Mar 18th, 2006 7:32 PM
On the third anniversary of the war in Iraq, a demonstration and rally was held in Fresno. Also included in this article - information about anti-war events happening in the South Valley on Sunday and another march that will be held next week in Fresno. 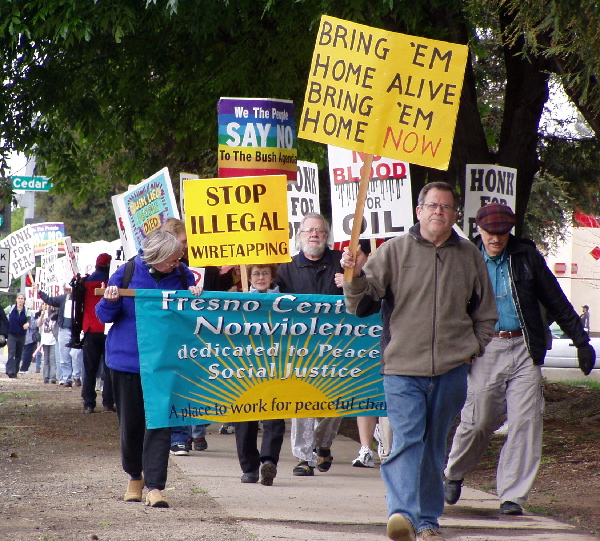 Rally in the Valley
By Mike Rhodes

Over 300 Fresnan’s marked the three-year anniversary of the U.S. war in Iraq by holding a march and rally today. The demonstration started near CSU Fresno and the march proceeded to the Free Speech Area on the campus where numerous community groups had literature tables set up.

The main speaker was nationally known peace activist Nadia McCaffrey. Nadia McCaffrey lost her son, Patrick, in June of 2004, in an ambush near the American military base at Balad, Iraq. Nadia is known as the mother who defied President Bush by allowing the media to view her son's flag draped coffin. Nadia told the audience that “we have been in Iraq for 3 years now and what have we accomplished?.” She said that the US. has built 14 military bases and a new embassy in Iraq. Nadia, who was recently in Iraq, said “each military base is a self contained city. We have to stop this war machine now!”

Sureya Sayadi, MD, also spoke. Sureya was born in Kirkuk, Kurdistan, Iraq. At age of 12 she fled from Kirkuk due to Saddam's policies toward the Kurds and went to a refugee camp in Iran. She told the crowd of her recent arrest with Cindy Sheehan in New York and said “we are in Iraq for the oil and we are there to divide the region.” She said things are worse in Iraq now than they were under Saddam.

Local speakers included the Reverend Floyd Harris and Stan Santos. Harris told the crowd that “if you want peace, work for justice.” He called for an end to the war in Iraq and invited the community to join the National Action Network for the rally they hold in West Fresno every month. That rally is held on the third Friday of every month at the intersection of 'C' and Fresno Streets in Fresno.

Stan Santos said there was going to be a March for Peace in Fresno next Friday, March 24. This event is a part of a 241 mile march that is starting in Tijuana, Mexico. In Fresno, the group will march from Chestnut and Kings Canyon to Downtown, for presentations at the Congressional Offices of Senators Feinstein and Boxer, and Representatives Cardoza and Costa; down Blackstone Ave. to Shaw and the Peace Corner; then west to the office of Representative Radanovich and end near Shaw and 99.

The march will bring together Peace activists, workers, students, unionists, Raza, African-Americans and particularly, our youths who are being targeted by military recruiters. More information about this march is available by calling Stan Santos at 559-908-6701.

This year Peace Fresno < http://www.peacfresno.org > and the Campus Peace and Civil Liberties Coalition at CSU Fresno, http://www.csufresno.edu/campuspeace , joined to organize the Rally in the Valley.

On Sunday, March 19 Tulare County (which is just South of Fresno) peace activists will join the nationwide week of protest to mark the Three-Year Anniversary of the Iraq War. Here is their statement:

As Iraq heads toward civil war, people in cities and towns throughout the United States will take to the streets to urge Congress and the White House to bring all the troops home.

WHAT: As part of a week of antiwar activities in hundreds of cities throughout the United States, peace activists in Tulare County will hold anti-war vigils to mark the three-year anniversary of the U.S. invasion of Iraq and send a message to Congress and the White House: the Iraq war must end, and after three years of a failed policy, it's time to bring all the troops home.

The majority of people in the United States and in Iraq oppose the war, which has thus far cost the lives of more than 2,300 U.S. troops and tens of thousands of Iraqis (estimates range from 33,489 to 200,000). As the three-year anniversary of the invasion of Iraq approaches, the country is wracked by violence and threatened with the prospect of civil war, Iraqi civilians are suffering from a lack of basic services, including electricity and clean water, and women's rights are being eroded.

“ How many people in Tulare County have lost relatives or felt the effects of the cuts in education, health services, police and fire services or infrastructure as money is siphoned off to maintain the occupation of a country that wants us to go home? Much of violence and death we read about every day is the direct result of us being there. We've already spent $250 billion on the war, but things in Iraq keep getting worse instead of better. It is time to bring our troops home. " said Bill Warner, a member of the South Valley Peace Center , the sponsor of the vigils.

The Tulare County vigils are part of more than 450 events throughout the United States being held between March 15 and March 22 to mark the three-year anniversary of the war. The events are being sponsored by the South Valley Peace Center and coordinated with United for Peace and Justice, a national anti-war coalition with more than 1,300 member groups throughout the country. For a full list of national events, see http://www.unitedforpeace.org , as well as local events see http://www.svpc.info 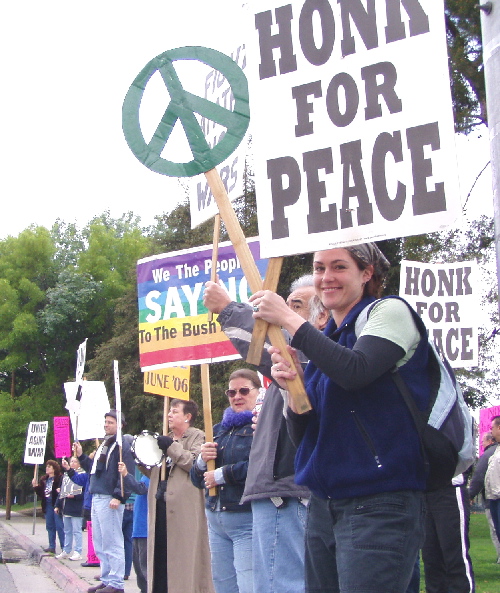 The demonstration started on the corner of Shaw and Cedar. All Photos by Mike Rhodes.
http://www.fresnoalliance.com/home
§United Against War
by Mike Rhodes (MikeRhodes [at] Comcast.net) Saturday Mar 18th, 2006 7:32 PM 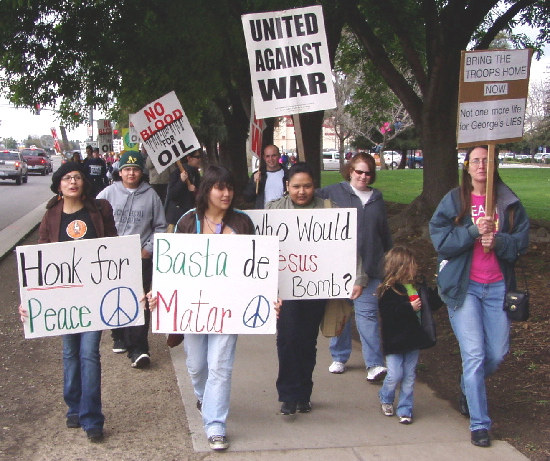 The march proceeded down Shaw to the Free Speech Area at CSUF.
http://www.fresnoalliance.com/home
§You Can’t Be All You Can Be If Your Dead
by Mike Rhodes (MikeRhodes [at] Comcast.net) Saturday Mar 18th, 2006 7:32 PM 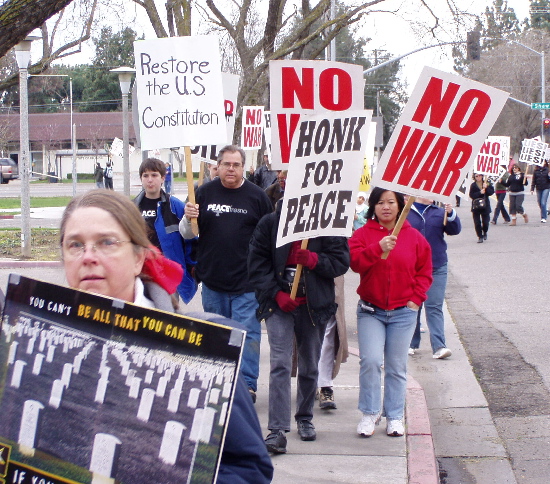 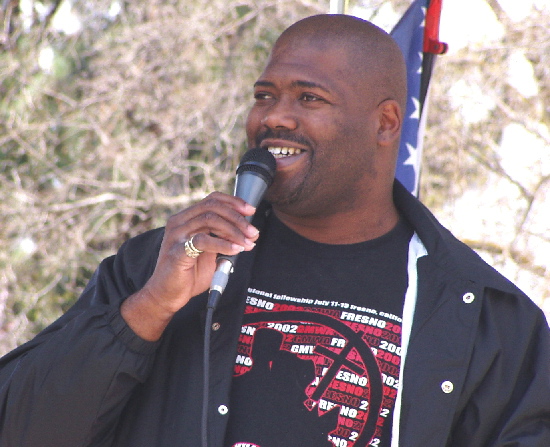 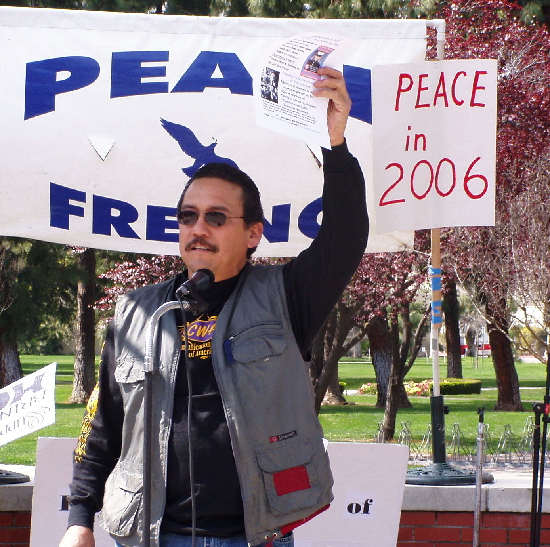 Stan Santos said there was going to be a March for Peace in Fresno next Friday, March 24.
http://www.fresnoalliance.com/home
§Raging Grannies
by Mike Rhodes (MikeRhodes [at] Comcast.net) Saturday Mar 18th, 2006 7:32 PM 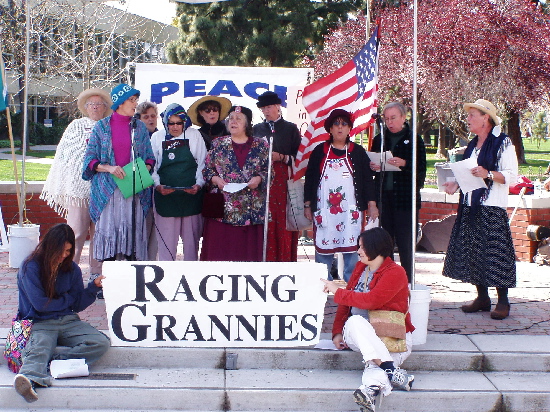 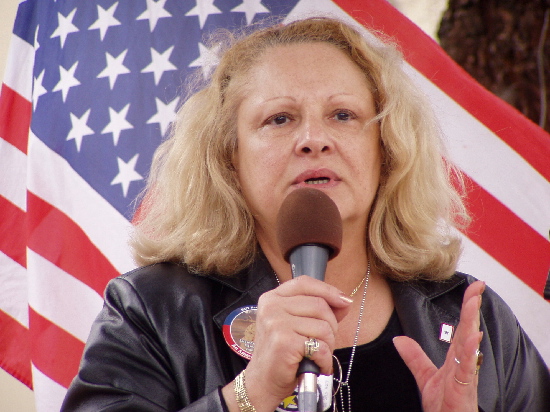 Nadia McCaffrey lost her son, Patrick, in June of 2004, in an ambush near the American military base at Balad, Iraq.
http://www.fresnoalliance.com/home
§Sureya Sayadi, MD
by Mike Rhodes (MikeRhodes [at] Comcast.net) Saturday Mar 18th, 2006 7:32 PM 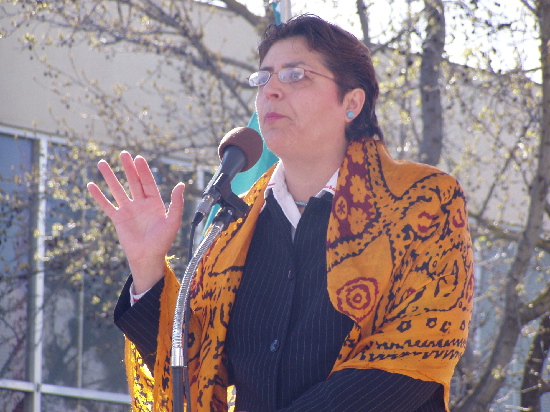